Tim J. Lord's "Down in the face of God," a radical reimagining of the Oedipus story was part of the 2020-21 drama performance season.

10 contemporary playwrights you should know

Throughout history, playwrights have used their gifts to highlight social movements, push boundaries and examine common themes of human nature. While many minds immediately think of William Shakespeare when hearing the term ‘playwright,’ contemporary playwrights have been a strong driving force in the discussion of important topics like race, gender, ability and sexuality by exploring them through a critical and dramatized lens.

Dean of Drama Scott Zigler takes us through ten of the most notable contemporary playwrights and what we should know about them. While the term ‘contemporary’ can technically include anything written since the 1950s, Zigler’s list focuses on writers who have produced works within the last ten years. In fact, Zigler adds that he considers this to be the ‘Golden Age of playwriting.’

Zigler believes it is important that students in the School of Drama have a thorough understanding of both classical and contemporary playwrights. "Contemporary playwrights are telling the stories that are most relevant to the moment we're in and most likely to keep a younger audience member interested in live theater." He adds that an increased focus on newer writing has been extremely useful as Drama faculty work to decolonize the curriculum so that students can better relate to their classwork and productions.

Playwrights on Zigler's list are listed in alphabetical order by last name:

Baker first received national recognition for her work “Body Awareness” and has since become well known for her group of four plays called “The Vermont Plays.” Winner of the 2014 Pulitzer Prize for her play “The Flick,” Zigler lists Baker as someone who is currently in the center of American playwriting. A MacArthur Fellowship winner, Baker also earned critical acclaim for her adaptation of Russian playwright Anton Chekov’s “Uncle Vanya.” 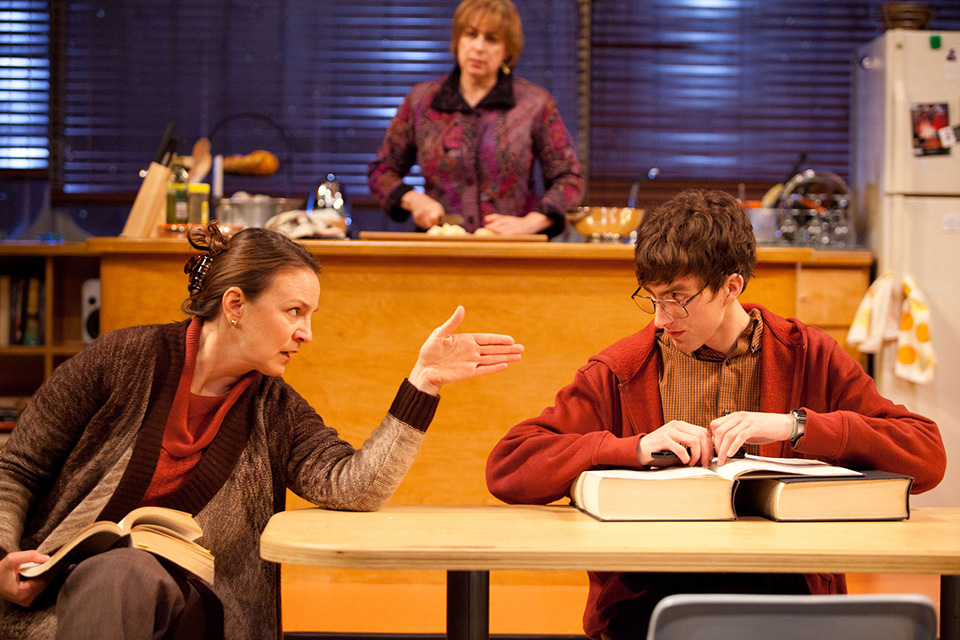 A winner of the 2019 Pulitzer Prize in Drama for her play “Fairview,” Zigler says that Drury is “known for writing in a very pointed manner about the issue of race in America.” Also known for writing “Really” and “Social Creatures,” Drury is the winner of the Susan Smith Blackburn Prize and the Steinberg Playwright Award. Zigler adds that Drury’s work “We Are Proud to Present a Presentation About the Herero of Namibia, Formerly Known as Southwest Africa, From the German Südwestafrika, Between the Years 1884–1915” was produced as a Keys to the Kingdom workshop piece in 2018 and he considers it to be the most powerful piece of work created on the campus that year.

Author’s note: The Keys to the Kingdom program in the School of Drama allows graduating students the opportunity to produce, act in and direct a play of their choosing. 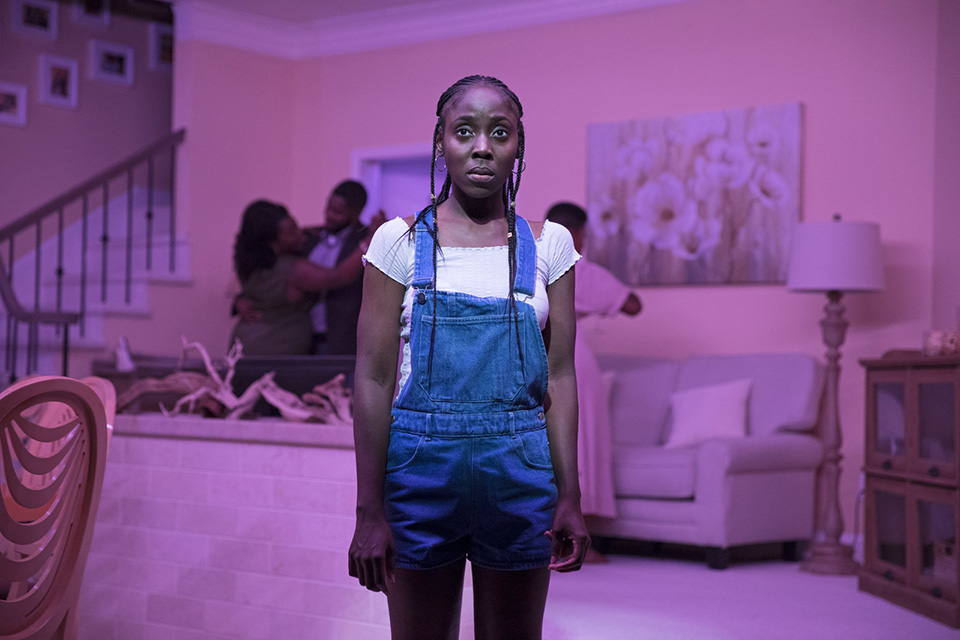 Zigler lists Guirgis as an important figure in contemporary playwriting whose works have been produced all over the world. Guirgis’ most recent Pulitzer prize-winning play, “Between Riverside and Crazy,” included Drama alumnus Stephen McKinley Henderson in the starring role of "Walter 'Pops' Washington" for which he won the 2015 Obie Award for Best Actor. Other well known plays include “Jesus Hopped the A Train'' and “The Little Flower of East Orange.” The School of Drama presented Guirgis’ “The Last Days of Judas Iscariot,” directed by Quin Gordon, in the fall of 2016. His work “Our Lady of 121st Street,” directed by Carl Forsman, was part of the 2020-21 performance season. 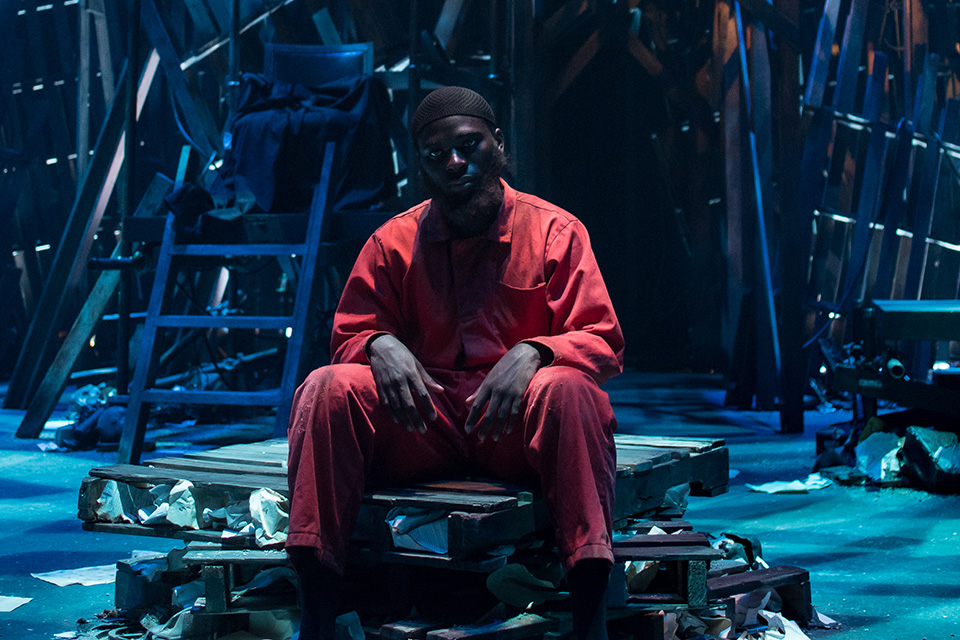 Stephen Adley Guirgis' "The Last Days of Judas Iscariot" was performed by the School of Drama in Fall 2016 / Photo: Peter J. Mueller

Also an actor and philanthropist, Harris is best known for his plays “Daddy: A Melodrama” and “Slave Play,” which has been nominated for 12 Tony Awards including Best Play. Zigler notes that Harris is both a writer of African descent and self-identifies as queer. Harris talks often about how his writing is a reflection of that intersectionality. Recently, Harris signed a pilot deal with HBO and has become a co-producer for “Euphoria.” 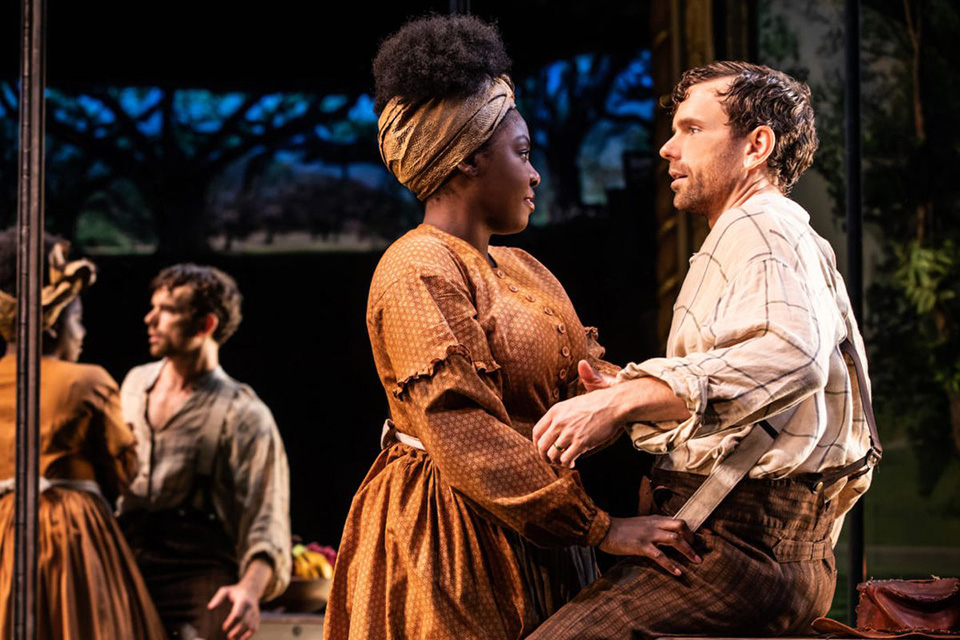 Lee is best known for her work “Straight White Men'' which led to her becoming the first female identifying playwright of Asian descent to ever have a play on Broadway. Also known for the works “Songs of the Dragons Flying to Heaven” and “Untitled Feminist Show,” Lee writes extensively about viewing America through the immigrant experience, using her own background as a Korean immigrant for inspiration. 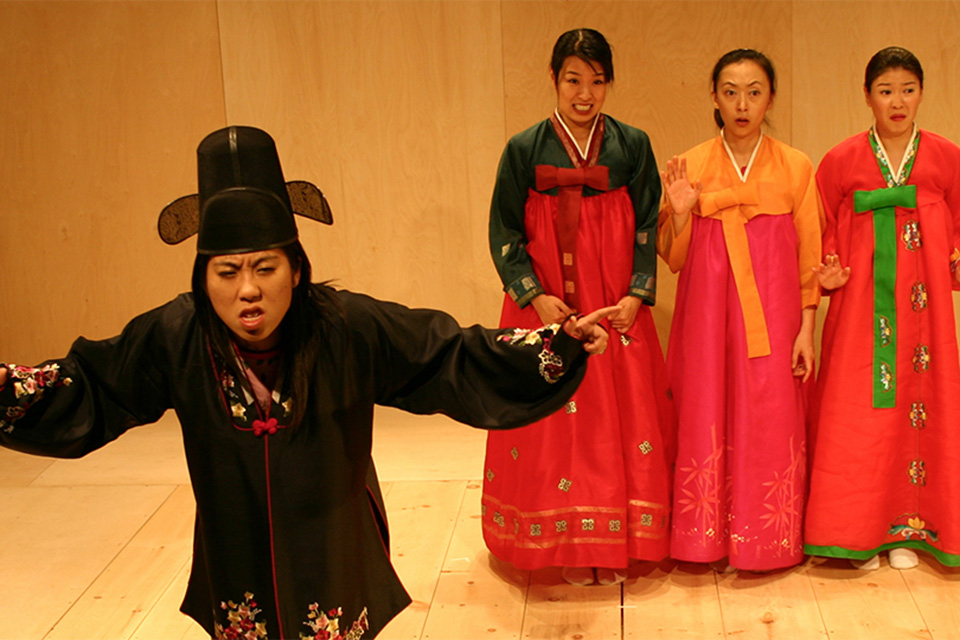 Young Jean Lee drew inspiration from her background as a Korean immigrant for her work “Songs of the Dragons Flying to Heaven.” / Photo: Young Jean Lee

A recipient of the inaugural Apothetae-Lark Fellowship for a writer with a disability, Zigler lists Lord as a playwright who has focused on questions surrounding ability and ableism in his work. “Differently abled individuals are often neglected in the conversations on equity and inclusion in the theater community,” notes Zigler. Lord’s works include “On Every Link a Heart Does Dangle; or Owed,” “The Hard Price” and “We Declare You a Terrorist.” The School of Drama 2020-21 season production of Lord’s “Down in the face of God,” directed by faculty member Cameron Knight, was livestreamed as part of Contemporary Voices: A Virtual Theater Festival. 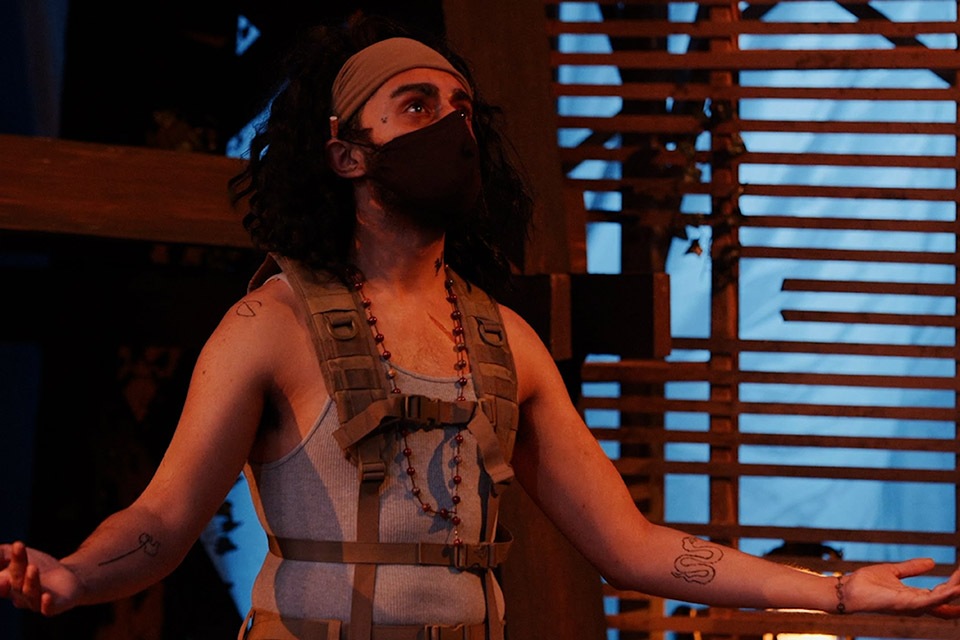 The School of Drama's performance of "Down in the face of God" by Tim J. Lord was part of the 2020-21 performance season.

McCraney is most widely known for writing the play “In Moonlight Black Boys Look Blue” which was adapted into the 2016 film “Moonlight” and led to him winning the 2016 Academy Award for Best Adapted Screenplay along with screenwriter Barry Jenkins. A member of the Steppenwolf Theatre Ensemble, McCraney has won both the Windham–Campbell Literature Prize and the MacArthur Fellowship. Other notable works by McCraney include “The Brother Sister Plays” trilogy and “Choir Boy.” 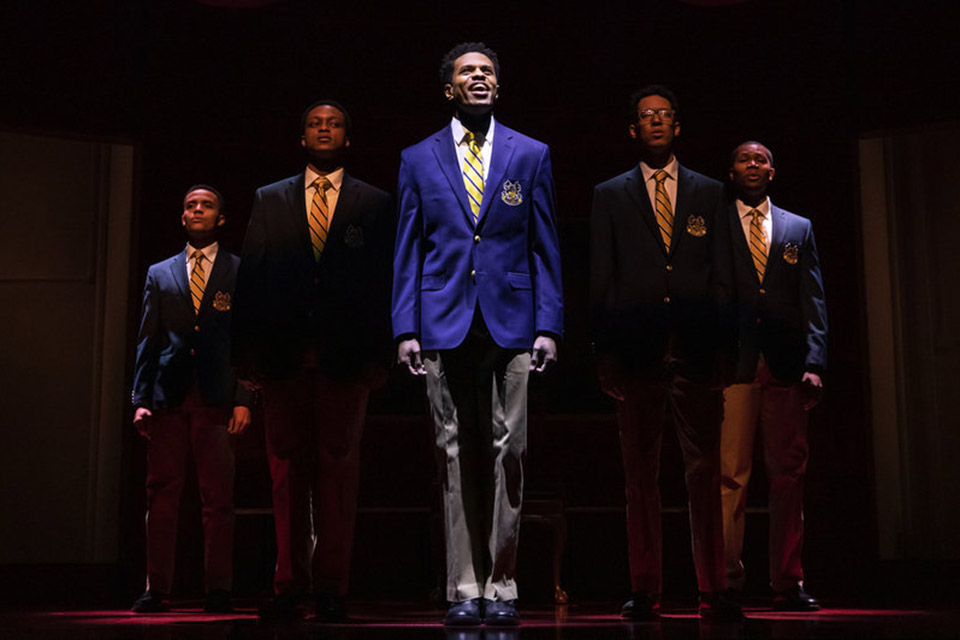 Zigler refers to Morisseau as one of the leading figures in American playwriting at the moment. A winner of the MacArthur Fellowship in 2018, Morisseau wrote “The Detroit Plays,” which is a trilogy of plays that includes “Detroit ‘67,” “Paradise Blue” and “Skeleton Crew.” Morisseau also wrote the book for the jukebox musical “Ain’t Too Proud: The Life and Times of The Temptations,” which earned her a Tony nomination for Best Book of a Musical. 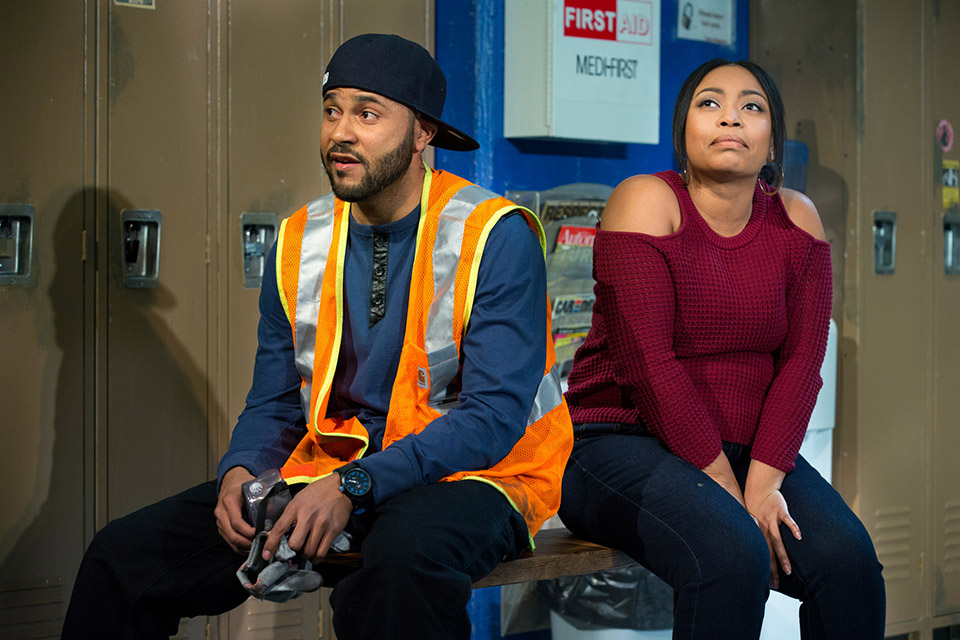 Zigler lists O’Hara as another playwright who focuses on the intersectionality of the queer and black experiences, having written several plays including “Bootycandy,” “Antebellum” and “Barbecue” which Zigler calls, “very pointed studies of identity in America.” O’Hara is also known as an accomplished director and was nominated for a Tony Award for Best Direction of a Play for Harris’ “Slave Play.” Other accolades include a 2010 Helen Hayes Award for Outstanding New Play and 2015 Lambda Literary Award for Best LGBT Drama. 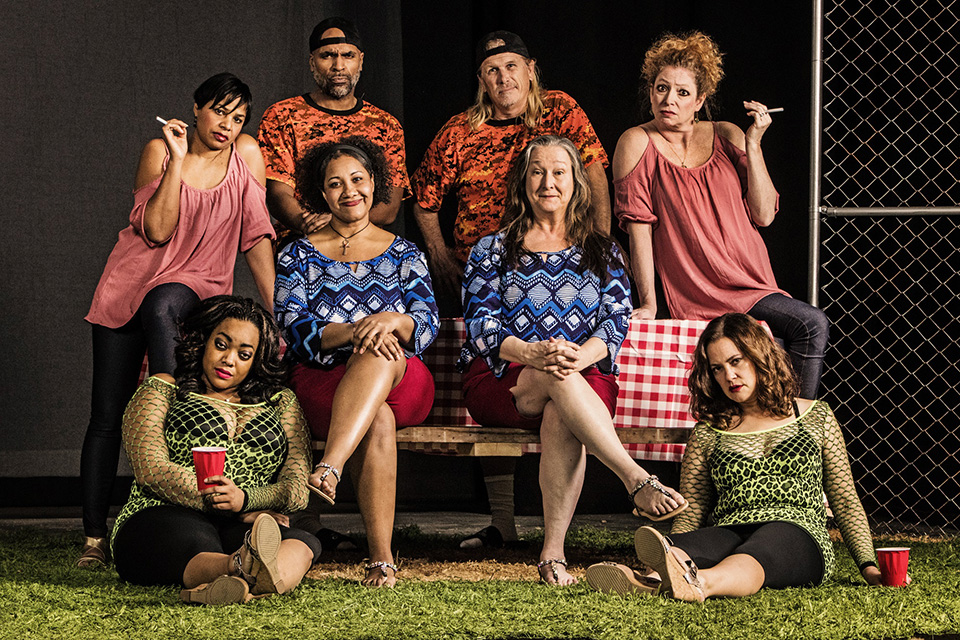 Rounding out the list, Zigler includes Svich calling her “a very active voice in the theater community serving as one of the backbones of multicultural theater and the recent move towards a more inclusive theatrical landscape.” Svich has won numerous awards for her works including the 2012 Edgerton Foundation New Play Award for “Guapa” and the 2011 American Theatre Critics Association Primus Prize for her play “The House of the Spirits.” She received an OBIE Award for Lifetime Achievement in the theatre. She is also co-organizer and curator of After Orlando theatre action in response to the 2016 Pulse nightclub shooting. 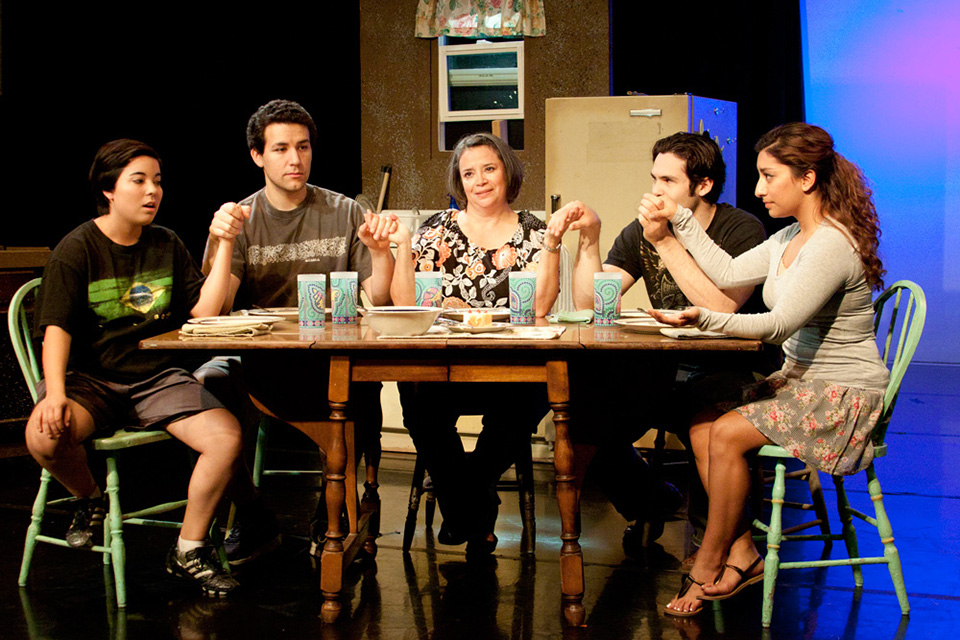