Sphinx Virtuosi returns to UNCSA with concert that challenges the classical canon, Oct. 5

Sphinx Virtuosi, a chamber orchestra composed of some of the nation’s top Black and Latinx classical soloists, will return to the UNCSA to perform Tracing Visions, a program that sets out to challenge and evolve the classical canon by illuminating a new pathway for listening, sharing and expression.

The group’s third concert at UNCSA will be at 7:30 p.m. Tuesday, Oct. 5, in state-of-the-art Watson Hall on the UNCSA campus. Tickets are $20 regular and $15 student and are available online or by calling the box office at 336-721-1945. UNCSA performance venues will be open at full capacity and audiences will be required to wear masks. UNCSA and the Violin Channel will co-stream the concert through the new series Live from Watson Hall. Register for the free livestream online or watch on the Violin Channel Facebook page. 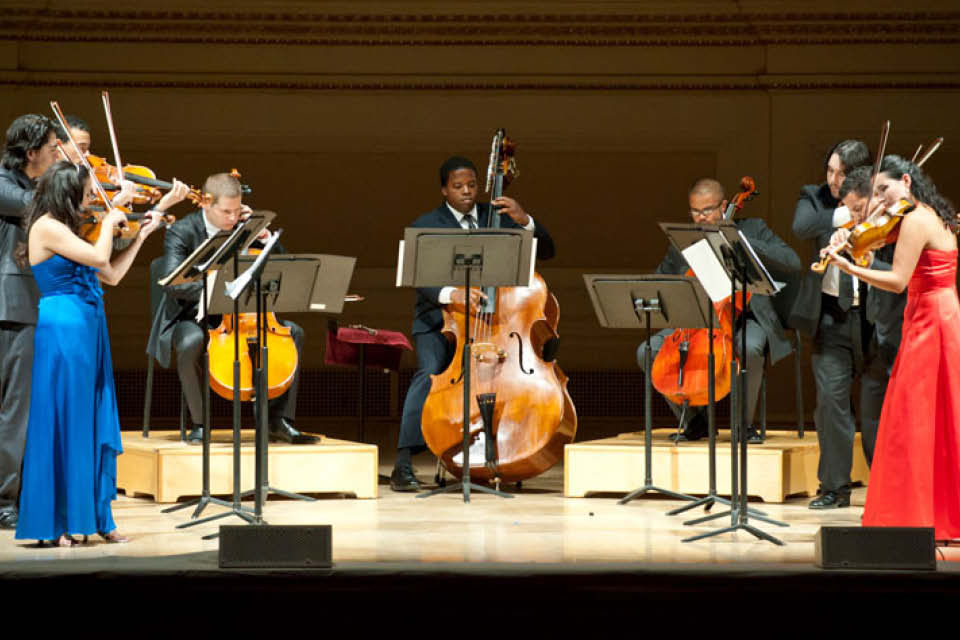 Sphinx Virtuosi will perform on Oct. 5.

In what the ensemble refers to as a “a bit of a musical archeology project,” the program offers elements of uncovered literature by Samuel Coleridge Taylor and Florence Price, and Ginastera's epic Concerto for Strings, as well as a visit to Cuba for a glimpse into the sounds from afar that have influenced much of what we listen to today. The program seeks to tell a more complete story of America through the voice of Xavier Foley and his vision of the “Black National Anthem.” Jessie Montgomery's “Banner” unleashes the vibrancy of the many voices comprising our country and its very fabric.

“Sphinx Virtuosi is one of the most dynamic chamber orchestras in America,” said Saxton Rose, dean of the School of Music. “We’re proud to offer a performance of this caliber to our students and our patrons, continuing the School of Music’s longstanding commitment to perform music being composed today alongside classics from centuries past, by composers who represent the full mosaic of our global creative ecosystem.”

While they are at UNCSA, the members of Sphinx Virtuosi will record the work of student composers in a state-of-the-art studio that opened this fall; will visit string masterclasses; and will hold a question-and-answer session with Music students.

... first-rate in every way ... producing a more beautiful, precise and carefully shaped sound than some fully professional orchestras that come through Carnegie Hall in the course of the year.

Sphinx Virtuosi was founded in 2004 by the Detroit-based Sphinx Organization, a social justice organization dedicated to transforming lives through the power of diversity in the arts. Performers are alumni of the renowned Sphinx Competition who come together each fall to reach new audiences. Through the Sphinx Virtuosi National Tour, this self-conducted ensemble brings fresh, diverse programming to leading venues around the country and engages in immersive outreach to bring classical music to communities nationwide, including students of all ages. Including annual stops at Carnegie Hall and Miami’s New World Center, the Sphinx Virtuosi perform to sold-out crowds and continue to garner critical acclaim.

A critic for The New York Times described a Sphinx Virtuosi performance as “first-rate in every way ... producing a more beautiful, precise and carefully shaped sound than some fully professional orchestras that come through Carnegie Hall in the course of the year.”

Dedicated to new music, the ensemble has pioneered the discovery of gems by composers of color, with the aim of expanding the canon and amplifying new and important voices.

The program for Tracing Visions includes: