Genre-bending classical ensemble yMusic headlines an array of guest artists performing at the University of North Carolina School of the Arts (UNCSA) during the spring semester, complementing concerts by School of Music faculty-artists, student ensembles and studios. Other guest artists include accomplished alumni and other celebrated soloists performing a range of repertoire from jazz to contemporary classical and more.

“We are so pleased to offer our community a wide array of guest-artist performances featuring renowned ensembles and soloists of today, and even more pleased that we can do so in person while also livestreaming select events through Live from Watson Hall,” said Dean of Music Saxton Rose. “It’s imperative that our conservatory students are exposed to the full spectrum of musical genres, and we achieve that best by offering a diverse schedule of guest artists who are performing at the top of their profession. It is invaluable experience for our students to participate in workshops and master classes offered by these artists.”

Unless otherwise noted, tickets are $20 general and $15 student with valid ID, available online. UNCSA venues are open at full capacity, and masks are required.

yMusic, billed as “six contemporary classical polymaths who playfully overstep the boundaries of musical genres” (The New Yorker), performs a range of contemporary and genre-bending works at 7:30 p.m. Saturday, Feb. 19, in Watson Hall. 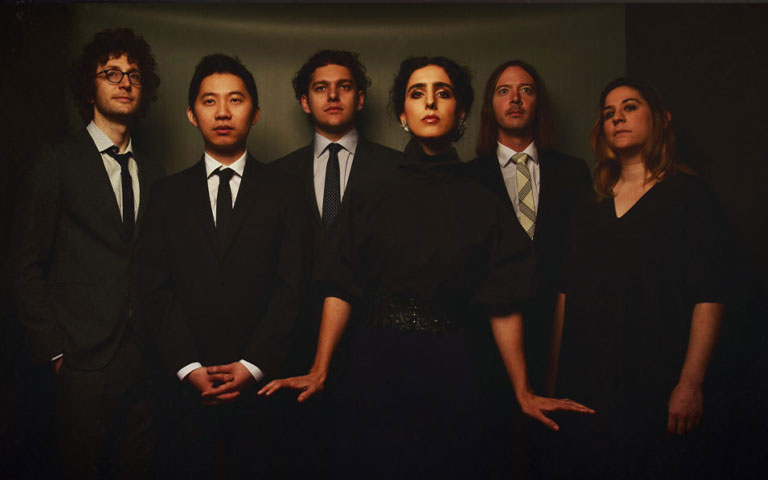 yMusic will perform February 19 at UNCSA.

While on campus, yMusic will record the work of UNCSA student composers in a new state-of-the-art recording studio; will offer career development sessions; and will coach the contemporary music ensemble, the nu Ensemble.

Founded in New York City in 2008, yMusic believes in presenting excellent, emotionally communicative music, regardless of style or idiom. Their virtuosic execution and unique configuration (string trio, flute, clarinet and trumpet) has attracted the attention of high-profile collaborators — from Paul Simon to Bill T. Jones to Ben Folds — and has inspired original works by some of today’s foremost composers, including Nico Muhly, Missy Mazzoli and Andrew Norman.

Other guest artists include

UNCSA Jazz Ensemble in Concert with Jon Metzger
Tuesday, Jan. 25 at 7:30 p.m. in the Freedman Theatre

Acclaimed alumnus and jazz vibraphonist Jon Metzger (M.M. ’94, B.M. ’81) will join the UNCSA Jazz Ensemble for its winter concert. Metzger will perform “Bag’s Groove” by Milt Jackson, “The Nearness of You” by Hoagy Carmichael and Ned Washington, and a feature with the UNCSA Jazz Combo. The Jazz Ensemble will serve up a program of the “melting pot” of jazz, celebrating the variety of style throughout the heyday of big band jazz.

“A star vibist,” as he has been trumpeted by Jazztimes, Metzger has developed an international presence through extensive touring, recording and lecturing. A winner of a National Endowment for the Arts Fellowship Grant for Performance, he has appeared at well-known jazz venues across the United States and has led his quartet on tours of Germany, Italy, Holland, Belgium and Austria. He has played for kings and queens and other heads of state while serving as a jazz ambassador to more than 20 foreign countries. Metzger’s recordings have received widespread airplay and critical acclaim, garnering three Grammy nominations.

A recipient of the North Carolina Miles Davis Jazz Service Award, he is now the artist-in-residence and professor of music at Elon University, where he was presented with the coveted Distinguished Scholar Award.

Magill has garnered international acclaim as a soloist, chamber musician and recording artist. He is the former associate principal cello of the Metropolitan Opera Orchestra and former member of the Houston Symphony and the Pittsburgh Symphony. A champion of overlooked Romantic and early 20th-century repertoire, he has made world-premiere recordings of Vernon Duke’s “Cello Concerto” and Franco Alfano’s 1925 “Cello Sonata,” both on the Naxos label.

Alumnus Owen Broder (High School ’08) runs in a variety of musical circles, leading his own groups and participating in others. His American Roots Project’s debut album, “Heritage,” was praised by DownBeat Magazine as a “transcendent work of art,” and listed as No. 5 among the Best Music of 2018 by NPR. Broder’s quintet, Cowboys & Frenchmen, has enjoyed multiple U.S. tours and found success in international competitions, receiving critical acclaim for its three full-length recordings.

Broder is a member of the Grammy-nominated Anat Cohen Tentet and the Manhattan Saxophone Quartet and has performed with internationally respected artists such as Ryan Truesdell’s Gil Evans Project, Trio Globo, and YouTube sensation Postmodern Jukebox.

An award-winning composer and arranger, Broder earned a 2018 ASCAP Herb Alpert Young Jazz Composer Award for “Goin’ Up Home.” In 2020 he received a commission grant from the International Society of Jazz Arrangers and Composers.

Broder was named 2021 Artpreneur of the Year by UNCSA for his entrepreneurial venture “Live From Our Living Rooms,” credited as “the first online jazz festival” (Rolling Stone) that raised more than $140,000 in support of U.S.-based musicians whose performance careers were halted due to COVID-19.

Billy Hunter, principal trumpet with the Metropolitan Opera Orchestra and professor of trumpet at the University of Texas at Austin, performs a recital with pianist Anna Stoytcheva of the American Chamber Players Ensemble. The program will include a new work by Lora El Ahmad, “On the Bright Side,” as well as a selection of works by Haydn, Hindemith, William Grant Still, Hovanhess and more.

Hunter previously was principal with the New World Symphony and Spoleto Festival Italy orchestras and has performed as guest principal with the Frankfurt Radio Symphony in Germany, Malaysian Philharmonic and the Charleston Symphony Orchestra. He’s performed with the New York Philharmonic and the Boston, Baltimore and Dallas symphonies. As a chamber musician and soloist, Hunter has performed with ensembles and music festivals including Grant Park Orchestra, University of Texas Symphony and Wind Ensemble, Prometheus Chamber Orchestra, Eastern Music Festival Orchestra, American Brass Quintet, the Martha’s Vineyard Chamber Music Festival and the MET Chamber Ensemble. He won first prize in the Kingsville International Solo Competition brass and non-string divisions and second prize in the National Trumpet Competition, and is the recipient of the Roger Voisin Trumpet Award as a fellow of the prestigious Tanglewood Music Center in the Berkshires.

Since winning the prestigious Ettore Pozzoli International Piano Competition in Milan, Italy, at age 17, Stoytcheva has performed throughout North America, Europe and Japan. She has appeared as soloist with the Orchestra del' Angelicum in Milano, the Juilliard Orchestra, the New World Symphony and the Bulgarian National Radio Orchestra, among many others, and she has been the subject of several documentaries on Bulgarian National Radio and Television. She has performed at Avery Fisher Hall, Carnegie Weill Recital Hall, Alice Tully Hall and Merkin Hall, and her extensive chamber music experience includes performances at Marlboro Music Festival, Classical Tahoe, Pianofest, Banff Center for the Arts, Music Academy of the West, Kneisel Hall and Bowdoin Music Festival. She has also recorded two solo albums, distributed internationally on the GEGA NEW label. Currently she is co-chair of the concert series “Bulgarian Concert Evenings in New York,” which takes place at the Consulate of Bulgaria and Weill Recital Hall.