Alumnus Owen Broder (H.S. Music '08) has had a prolific and varied career as a saxophonist and jazz musician in New York City and beyond. Broder currently performs with four bands and ensembles, including his own Cowboys & Frenchmen, who recently released their first visual album, "Our Highway."

Another recent venture is his collaboration with fellow musicians Sirintip and Thana Alexa on Live From Our Living Rooms, an innovative and rapid response to the COVID-19 pandemic and its effects on musicians and artists.

Broder shared with us the impetus for Live From Our Living Rooms, his love of jazz and how his two years at UNCSA helped shape the independent and adaptive skills he uses to approach his music career. 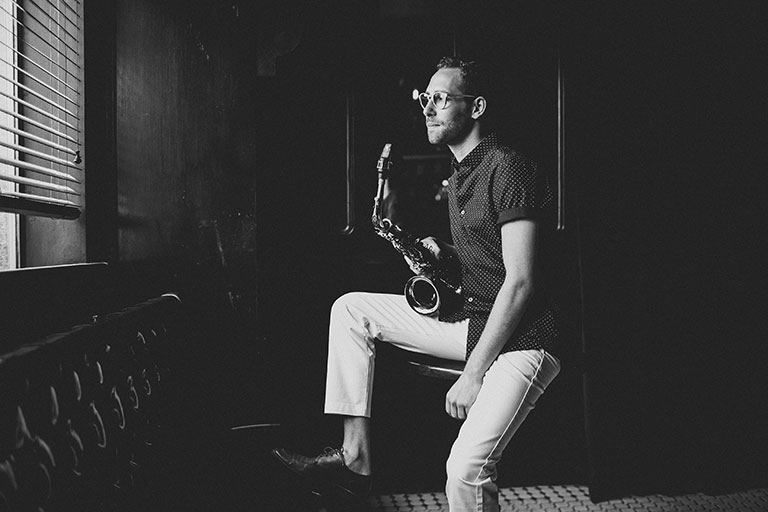 Live From Our Living Rooms

The first Live From Our Living Rooms event, an online jazz festival, was held at the beginning of April 2020, just a few weeks after the COVID-19 pandemic and subsequent shutdowns began to take hold in the United States.

"As soon as the pandemic hit, gigs and tours started getting cancelled," Broder says. Looking through Instagram, he saw lots of friends and colleagues holding their own individual virtual performances. One friend, Sirintip, had organized her own fundraiser to benefit artists. Broder realized that putting the two pieces together — independent concerts and dedicated fundraisers — could have even more impact.

"I reached out to Sirintip and said 'let's focus on a single collection of events around your fundraiser,'" Broder says. Sirintip looped in Alexa, and "Live From Our Living Rooms" was born. Planning for the virtual jazz festival, which featured over 28 events with musicians like Bill Frisell, Chick Corea, Christian McBride and UNCSA alumna Becca Stevens, began in mid-March, and the festival launched April 1.

A post shared by Live From Our Living Rooms (@livefromourlivingrooms)

The week-long virtual festival, billed by Rolling Stone as "the first jazz festival of the quarantine era," raised nearly $60,000 which was then administered as grants to New York-based artists.

In June, the trio partnered with DC JazzFest to raise money for Washington, D.C.-based artists, and in July, they hosted Creative Summit, an education-based event to benefit artists across the country, featuring 12 days of performances, educational webinars and virtual workshops.

So far, Live From Our Living Rooms has raised more than $140,000 in support of musicians who have been impacted by the COVID-19 pandemic and the group is in the very early stages of coordinating their next event.

A career in music and jazz

Broder has performed with music groups across a mix of styles and genres in his career, including performing with internationally recognized artists and stints with two musical theatre productions — the German tour of "Grease" and the U.S. premiere of "The Bodyguard the Musical." Currently, he plays saxophone in two of his own bands, Cowboys & Frenchmen and American Roots Project, and is a member of the Anat Cohen Tentet and the Manhattan Saxophone Quartet.

At the end of February 2021, Cowboys & Frenchmen released the 46-minute video album "Our Highway," which includes footage from a live 2019 concert, as well as scenes from tours over the last several years and other artistic elements.

Adaptability and a willingness to try something new are important elements to Broder in his individual work and collaborations. "We try not to get stuck in any patterns. We're always thinking about how to adapt to changing times and how people consume music, and so much of that is visual," he says. "And I'm always looking for new ways to scratch different creative itches."

I'm a jazz musician — but as time goes on, jazz gets broader and broader. It has a history of incorporating other genres, so I'm just operating within that tradition that already exists.

In jazz, exploration and embracing change are part of the tradition. "I'm a jazz musician — but as time goes on, jazz gets broader and broader. It has a history of incorporating other genres, so I'm just operating within that tradition that already exists."

"I love the variety that I get to engage in in my career," he adds. "The variety of projects I'm involved in, and then the variety within those projects, excites me."

Discovering and fostering his love of jazz

Broder has been involved with music since the age of 4, when he began taking classical piano lessons. In fourth grade band class, he picked up the clarinet and his interest in jazz began. Because of that interest, his teachers encouraged him to play saxophone as a more direct path to jazz. "So, from the sixth grade until I went to the School of the Arts, I was playing those three different instruments."

He attended performing arts middle and high schools in his hometown of Jacksonville, Florida In his final two years of high school, he felt he really needed a dedicated saxophone instructor and began looking for the right high school program.

He had a lesson with then-saxophone instructor Taimur Sullivan at UNCSA and met students who were already in the saxophone studio, including Eddie Barbash, Sam Owens and others. After talking with them and Ron Rudkin, who directs the jazz program, he says the school felt like a great fit for him. "There was a small, but close-knit group of people focusing on jazz, which was exciting."

He credits his fellow classmates, particularly Barbash, as influential. Barbash's dedication and knowledge of the jazz world was helpful. "Being around him and what he was doing, especially in the summer … he was attending programs I'd never even heard of before."

"The jazz program at the school is relatively small. What that did is force musicians who are focused on jazz to create their own opportunities," Broder says. "There's an independence that environment taught me. There's a lot of encouragement there that fosters creating your own opportunities."

Carrying on the teaching tradition

Broder is now an instructor himself, conducting master classes and guest teaching at performing arts high schools and universities around the country. For him, it's a natural extension of his work as a jazz musician. "So much of jazz is oral tradition and passing that down," he says.

"You learn so much about playing your instrument in school. But it's impossible not to be shocked by what building a career feels like. I talk to students about that," he adds. "And that includes those who might not go into performance as a career."

Striking a balance between humility and valuing your own time and talents will lead to work that fulfills and supports you.

He advises students to be strategic in planning their professional lives and making career decisions. "Be discerning, and also open to opportunities that push you beyond your comfort zone," Broder says. "Striking a balance between humility and valuing your own time and talents will lead to work that fulfills and supports you. Find joy in the art and in the relationships with your collaborators."