“It was absolutely thrilling,” Madison McLain (B.F.A. Design & Production ’19) recalled of the evening when audiences stepped into the New Amsterdam Theatre for the first time in 565 days. There was an air of excitement, nervousness and anticipation. A hair and makeup assistant for Disney’s Broadway production of “Aladdin,” McLain was a crew member on the show before the pandemic, and returned to support its highly anticipated reopening last September.

It was an extremely emotional performance for everyone, and she shared a moment from that evening she will never forget: “A few crew members had gathered backstage around a tiny monitor that displayed a live feed of the show,” she described. “As the orchestra swelled and the curtains opened for the start of the show, I looked around to see we all had tears running down our faces.” 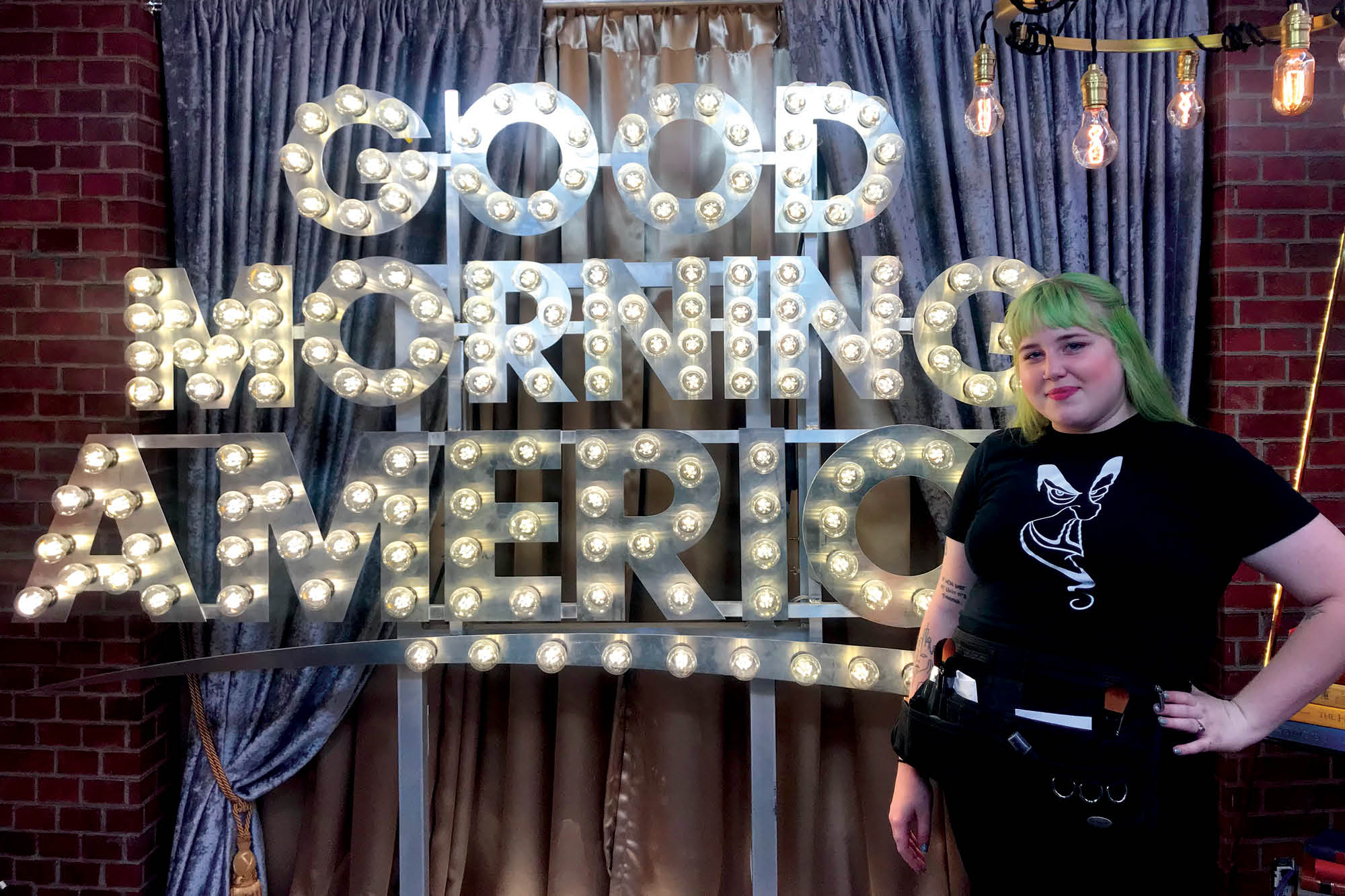 UNCSA alumni are back on the boards, bringing both classics and new works to audiences on Broadway, and beyond. As the recent Tony Awards attest, UNCSA is powering the return of Broadway as the pandemic subsides, with three nominated alumni (Camille A. Brown, Mary-Louise Parker and Paul Tazewell) and 13 alumni associated with Tony-nominated and Tony-winning productions. T. Oliver Reid (B.M. Music ’93), a member of the UNCSA Board of Visitors, was a swing and dance captain on “Hadestown” before Broadway went dark, and returned for its reopening in September 2021. In March, when several cast members fell ill due to COVID-19, threatening to cancel the evening show, he stepped into character as one of the Fates — a role traditionally performed by a female-identifying cast member — and brought the house down.

A delay in rehearsals because of the Omicron surge caused alumna and director-choreographer Camille A. Brown’s take on Ntozake Shange’s 1976 Broadway landmark “for colored girls who have considered suicide / when the rainbow is enuf” to be postponed. However, it was hailed as a “thrilling and exuberant revival” by The New York Times when it finally opened in April, and received seven Tony nominations. 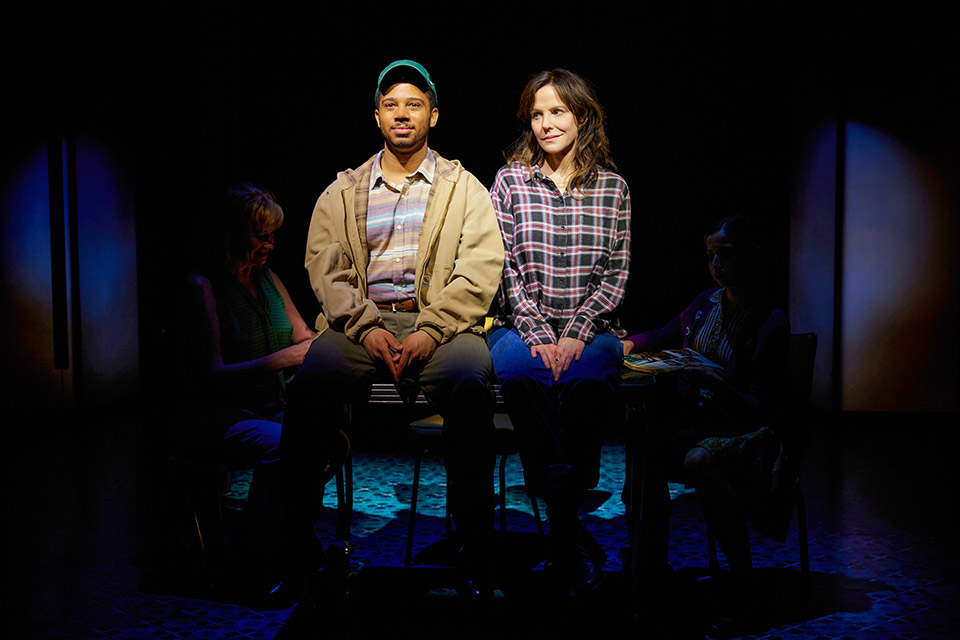 Among the new works, Drama alumnus K. Todd Freeman (B.F.A. ’87) is part of an “impeccable cast” (Deadline) in Tracey Letts’ “The Minutes.”

On tour, Fighting Pickles have supported productions from “Dear Evan Hansen” to “Wicked.” The latter employed several current students, alumni and faculty members during its stint last October in Greensboro, North Carolina, after being postponed from November 2020. And Jimmie “J.J.” Jeter (H.S. Drama ’12) traveled to Sydney, Australia, in March 2021 to perform in the first production of “Hamilton” in more than a year.

Lauren Blair Smith (B.F.A. Dance ’20) was a company member on the national tour of Broadway staple “Fiddler on the Roof,” tackling the roles of Shprintze and Bielke, among others. “I am still in awe of having performed with such a gifted group of artists,” said Smith, who completed more than 50 tour stops in six months. “It was an honor to share the ‘Fiddler’ story in so many communities across the United States.”

Mounting enormous productions like “Aladdin” and “Fiddler on the Roof” is never an easy feat, but pandemic safety precautions have made bringing them to the stage all the more laborious — and rewarding — for both cast and crew.

At “Aladdin,” where McLain works in a four-person hair and makeup room with fellow alums Grayson Frazier (B.F.A. Design & Production ’18) and Loryn Pretorius (B.F.A. Design & Production ’15), safety has been rigorously emphasized. In the months after the show’s reopening, cast and crew members took daily PCR tests and wore KN95 masks at all times, unless a performer was on stage. Backstage areas were outfitted with abundant air purifiers and hand-sanitizing stations. 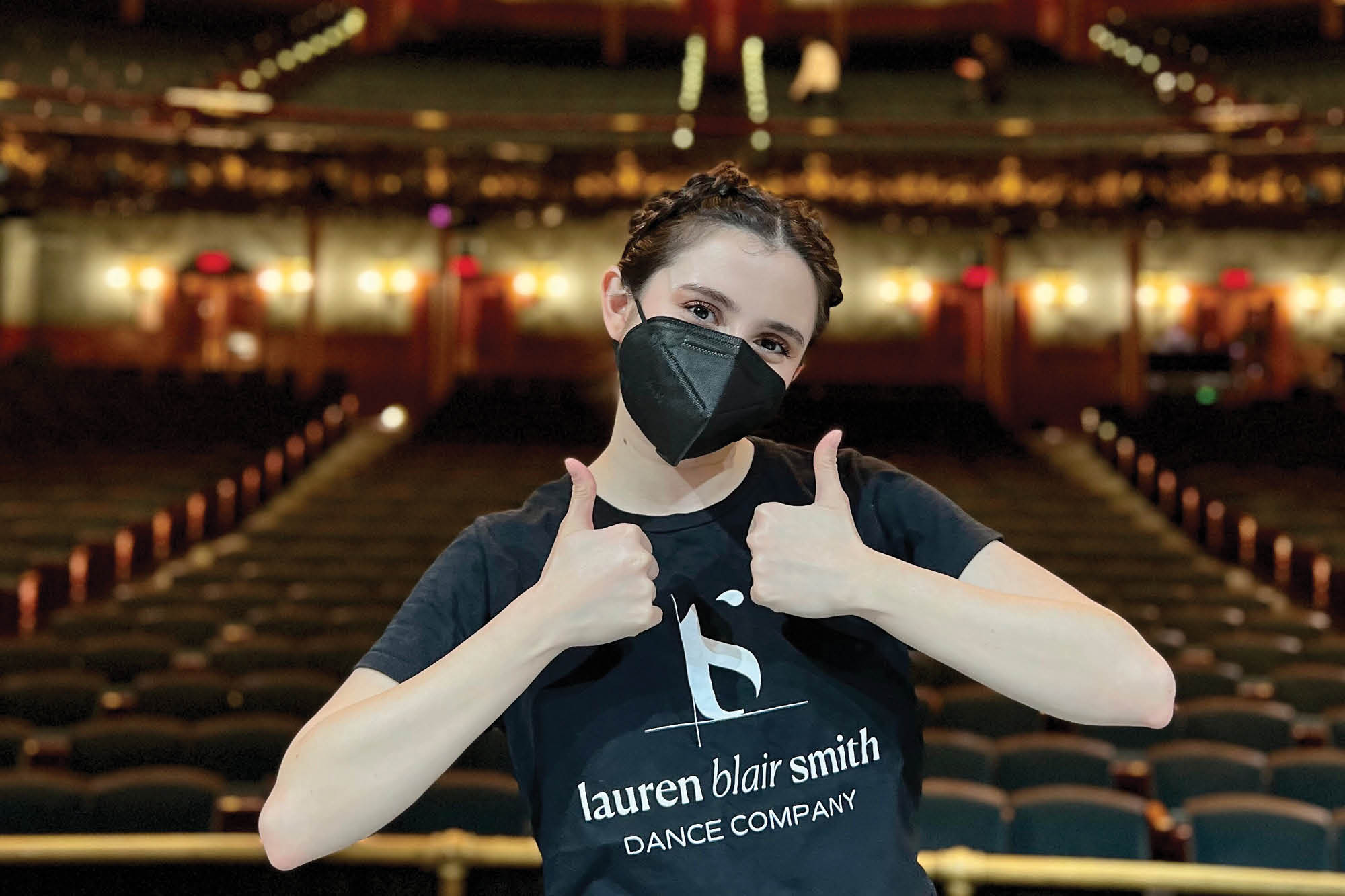 Dance alumna Lauren Blair Smith (B.F.A. '20) was a company member on the national tour of Broadway staple "Fiddler on the Roof."

McLain’s small crew continues to split hair and makeup duties for the entire cast, and is assigned certain actors to follow throughout the run of the show: placing mics at the top of the show, managing quick changes during the performance, and taking off and storing wigs at the end.

“My favorite character to work on is Genie,” McLain said. “His makeup involves lots of glitter, gold and precise eyeliner. It requires working very quickly and efficiently, which is a fun adrenaline rush.”

In the case of “Fiddler,” safety measures changed with nearly every tour stop.

“Our COVID-19 safety manager kept us updated on each city’s and venue’s policies and responses to the pandemic,” Smith explained. “We frequently tested to keep ourselves and, more importantly, those around us safe.” At the end of the day, she added, “It’s still about each individual doing their part for the sake of the entire team.”

This ensemble mentality is indicative of the closeness of the entire cast and crew on tour, both in and out of the theater.

“Regardless of what we were doing — from performing to moving equipment to understudying — we needed to be on point with every movement and every line, even if given last-minute notice,” said Smith. Gratitude and emotion are deep themes for McLain and Smith when revisiting how their lives have transformed since March 2020. Their perseverance, along with that of the greater arts community, is undeniable, and they aren’t afraid to recount the challenges of the last two years in tandem with their successes.

When “Aladdin” closed, along with virtually all other arts and entertainment work opportunities, McLain initially had a difficult time expressing her creativity. “I was overcome with so many emotions that I needed to sit with,” she said. “I was grieving my dreams being put on pause and the clear vision I thought I had for my future.”

During the shutdown, she worked to meet a longtime professional goal: becoming a member of IATSE Local 798, an arm of the International Alliance of Theatrical Stage Employees, which spans the United States and Canada and includes more than 150,000 workers in arts, media and entertainment crafts. “I am protected and my work is valued,” McLain said of the accomplishment. She returned to work on the show as a union member.

For Smith, who was still a student when the pandemic began, reimagining postgraduation plans — like her fellowship at Lincoln Center Education — was a focus. Initially slated to start shortly after departing UNCSA, the fellowship was delayed a year and ultimately collided with the “Fiddler” tour.

“My mentors at Lincoln Center worked with me to ensure that I gained the experience and knowledge of everything the program offers,” she said emphatically, adding that she attended many virtual meetings while on tour buses, in airports and between rehearsals.

During a five-day break from touring, Smith skipped out on rest and relaxation to travel to New York City to film her fellowship’s artistic project at Lincoln Center, focused on finding inspiration in the world around us and translating it to choreography.

The arts are important now, more than ever, because we need the arts to understand ourselves and the world around us. We create so that we can find new paths forward.

This deep immersion in the arts is a core value of Smith’s, and she wouldn’t have it any other way — especially when it comes to her work on “Fiddler.” The Tony Award-winning show is nearly 60 years old, yet has found new relevance in light of the war between Russia and Ukraine.

“There is a growing community focused on supporting the power of the arts for social change and the emotional relief it can provide to those who need it most,” explained Smith. “It will continue to evolve, expand and impact, and I am honored to have been part of a production that highlights increasingly relevant topics and opens up conversations in the greater community.”

The first theaters in New York City, predecessors of Broadway as we know it today, opened in the early 1700s and have closed when necessary through the years to support and protect their cast, crew and patrons — during the Revolutionary War, through many labor union strikes, and in the wake of the Sept. 11, 2001, terrorist attacks. Through many changes, the art has endured, sparking the curiosity and appreciation of Broadway audiences for hundreds of years. That feeling is still palpable now, even in the midst of ever-present uncertainty.

“The arts are important now, more than ever, because we need the arts to understand ourselves and the world around us,” concluded McLain. “We create so that we can find new paths forward.”