A cellist, two guitar players and a clarinetist walk into a bar. It sounds like the start of a joke, but it’s really the beginning of a band, and after three decades, Jump, Little Children is headed for the exit. The band that formed in ‘the Snack Bar’ (now known as the Pickle Jar) at UNCSA in the early 1990s is dropping its final album this month and getting ready for a farewell tour that includes a performance at Winston-Salem’s Ramkat in December.

“We started playing together informally in 1990,” recalls Jay Clifford, who studied classical guitar at UNCSA from 1988 to 1991. He and Christopher Pollen (B.M. ‘92, guitar), Ward Williams (B.M. ’94, cello) and Matt Bivins (B.M. clarinet), came together and played Irish folk songs and original, high-energy indie-pop tunes. These performances took place on a small wooden stage in a room decorated with silver-foil wallpaper and a grand crystal chandelier, while short-order cooks called out “cheeseburger and fries” and “BLT on wheat.” Soon Matt’s brother Evan (High School ‘92 Visual Arts) began sitting in on drums, and Jump, Little Children sprang onto the local music scene, performing at dances and in cafes and taverns across town. 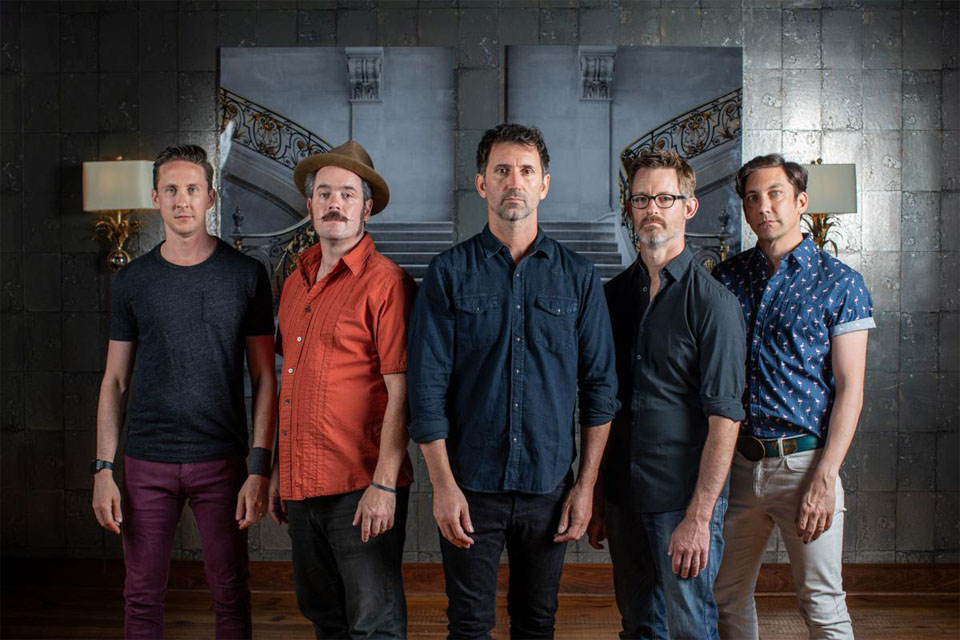 Over the next three decades, different iterations of the band moved to Boston and then to Charleston, South Carolina. They released nine albums, including Vertigo, which reached No. 44 on Billboard’s chart of top independent albums. Their music has been featured in television series such as “So You Think You Can Dance,” “Party of Five,” “Everwood,” “Scrubs” and Netflix’s “The Society,” and in the 2014 Zach Braff feature film “I Wish I Was There.”

Their final album, Foundering, was released on Sept. 23, with 13 tracks written by Clifford. “I feel like this is the strongest group of songs we have ever had the chance to record,” says Williams. “I don’t think Jay is capable of writing super fluffy pop songs, but harmonically and melodically, these songs are easy to listen to and fit fully into the confines of what pop and rock music is.”

Jonathan Gray, who joined the band playing double bass in 1995 when Pollen left, says the music evokes a visceral feel beyond the content. “There’s some musical nostalgia, not in the actual songs, but just in the feel,” he says. “It makes me think of songs from my childhood, teen and preteen years. It still has a very modern feel to it, but there are elements that harken back.”

Ward says that with a tenure of 30 years, nostalgia is inevitable. “It’s kind of weird us making an album today because our band has been around for such a long time. Us putting out anything is going to have a nostalgic feel to those who know us.”

Foundering began as an experimental project on Patreon, an app that allows content creators to run a subscription service and build close connections with their community. “In 2018, we made our last record, Sparrow, by starting a pledge music campaign,” says Clifford. “That went really well and was our introduction into how to make records independently. After that, we decided to take it a step further and opened a Patreon account.”

Clifford spent two and half years writing the songs for Foundering. Fans voted on their favorites through Patreon, and the band went into the recording studio in February.

Clifford says he found “expressive ways of saying things I probably would not have said if I think I have to go through some kind of record label hurdle, knowing that other people are going to be involved,” he said. “That allowed the songs to be more true, more authentic.”

The album was available on Patreon a few days before the official release and then at Record Stop.

The parents are gone, so let’s have fun

The band adopted its name from a blues song written by Leroy Dallas and covered by Sonny Terry and Brownie McGhee.

"The sentiment is 'the parents are gone so let’s have fun,'" Clifford says.

Though they mostly perform original tunes these days, Jump’s roots run to Ireland, where original member Pollen was born in a suburb of Dublin. To support the sound, Clifford started playing in an Irish tuning on his guitar and Matt Bivins picked up a penny whistle, beginning his tenure as a multi-instrumentalist with the band as he added accordion, mandolin and melodica, in addition to performing vocals.

At the arts conservatory of the 1990s, the classically-trained musicians got some resistance from instructors, but they also took heat from the Irish music community.

“We got resistance from both sides — from our professors just a little bit, but in the traditional Irish community as well when we were playing non-traditional songs,” Clifford says. “I remember playing a song I had written for John Cunningham, a renowned Celtic fiddle player, and that was one of the few moments where he really embraced it. He appreciated that I was adding a new song to the long tradition. But a lot of times we would play new stuff and really great Irish players were not into it,” he recalls.

A story that will live within us forever

Jump starts its farewell tour on Dec. 9 at the Cat’s Cradle in Chapel Hill, North Carolina, with additional stops in Raleigh, Charlotte, Atlanta, Brooklyn, Nashville and other East Coast cities before hitting its home stretch on Dec. 23 at the Ramkat in Winston-Salem. Its final concert on Dec. 30 at the Charleston Music Hall in South Carolina sold out within minutes.

The band announced the tour on its website and social media in 2021. “The past 30-plus years have been an incredible adventure — a mosaic of indescribable events, emotions and connections that have shaped who we are as people. It’s a story of highs and lows, of successes and failures, creativity, imagination and brotherhood, a story of a deep sense of awe and love for the art of songwriting and a story of the greatest fans a band could ever want. A story that will live within us forever.”

The band’s lows might include a 10-year hiatus that ended with a reunion concert in Charleston on the last night of 2015, when it announced it would release a new album. A successful crowdfunding campaign resulted in the release of Sparrow in 2018.

Us putting out anything is going to have a nostalgic feel to those who know us.

Most recently, original members of the Bivins brothers bowed out before recording Foundering. “Making this decision, of course, has been tough,” Matt told a Charleston newspaper last fall. “Heartbreaking, soul-searching, and, in the end, necessary.”

Guest artists sat in for the final recording and will accompany the band on tour, Jump announced while acknowledging the Bivins’ departure. “We continue to wish them all the success in the world,” the remaining members said.

The December concert in Winston-Salem will feature Josh Kaler, producer and drummer of Foundering, and Christina Cone of the Nashville-based band Frances Cone.

Moving on, Clifford looks forward to working on a new record and perhaps a new podcast.

Williams is rebuilding a small teaching studio in Ohio, and Gray plans to explore the new frontier of Appalachian music from his home in the North Carolina mountains — perhaps learning to play the fiddle and the gamba, a string instrument in the viol family. “Maybe I’ll become the preeminent mountain gambist,” he says.

As they transition to new projects, the three remaining members of Jump offer advice for musicians hoping to find success in independent music.

Williams says patience and perseverance go a long way. “Artists almost back themselves into a corner where they have to make it work. If you have a fallback plan, you’ll probably take it.”

“The number one thing across the board, not just in music, is adaptability and being able to switch context and skills,” says Clifford. “The only way the Patreon page worked was to pivot into different creative fields -- podcast mastering and mixing live shows and a whole bunch of different things that aren’t directly associated with writing songs."

Gray says artists should follow their passion. “It’s cheesy, but what do you have to lose by going for it? Do it as passionately as you can. It’s not up to you whether you make it. It’s up to the world,” he says.

Clifford agrees. “You have to believe that what you want to do has value and that you can express yourself in a way that you want to,” he says. “Love what you are doing.”