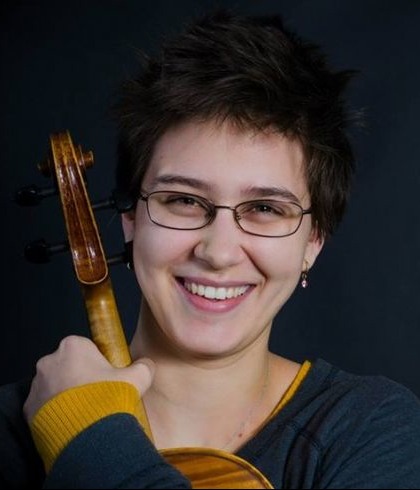 When violist Rachyl Duffy (’14) says it all seemed to happen by “accident”, it’s kind of hard to believe.

The William R. Kenan Jr. Excellence Scholarship recipient, current Colburn School graduate student and international viola competition champion may not be giving enough credit to her years of devotion to the viola and her willingness to put herself out there with fearless determination.

Growing up in the suburbs of Philadelphia, Duffy showed an interest in the violin as young as age 5. She may not remember the exact day she picked up the instrument for the first time, but after receiving a violin for her 5th birthday, everything else has seemingly fallen into place – “as if by accident.”

“I took lessons in a little shop with my first teacher for seven years, until he passed away at age 92.” After that, the search began for another teacher, who she eventually found – where else? – on Craigslist. Duffy’s lessons with instructor Shelley Beard would eventually lead her to the viola and, later, UNCSA.

When Beard suggested she consider the viola, Duffy says, “I was resistant to switching. But I was given a free viola and I thought, ‘Alright, I’ll try it.’ ” What she uncovered was her talent for the instrument and a curiosity to learn more.

It was during a lesson with Beard about playing in tune that it dawned on her just how much more there was to discover about making music.

“I remember I began to think that there’s a lot to this, a lot to learn. I had the potential to grow this from a hobby to something on a much deeper level,” Duffy says. She also began to realize that this was something she could actually major in for her college studies. Beard encouraged her to apply to several different schools and have lessons with viola instructors at each, including with UNCSA’s Sheila Browne. Duffy was accepted into 8 of the 9 colleges to which she applied, but UNCSA and the Kenan Scholarship beckoned her to Winston-Salem. While here, she embraced the school’s mantra of developing the artist as a whole person.

My time at UNCSA was a combination of experiences of really looking at my humanity … they really do develop the whole person. Whether it was in the student-run improv club, chamber music practice, going to see a play or just hanging out, I was always getting in touch with myself as a person and what it means to be human.

The entire School of Music faculty, she says, contributed to her success and understanding of her music. Whether it was in keyboarding with Karen Beres, music history with Michael Dodds, music theory with John Ferri, collaborating with pianist Allison Gagnon or exploring jazz improvisation with Ronald Rudkin, “all of my teachers really made a difference,” Duffy says. It was perhaps from Browne, though, that she learned best the value of taking chances and being herself at all costs.

“It’s hard to talk about someone who has had such an impact on your life. She has an adventurous, large personality. Nobody ever realizes she’s as short as she is,” Duffy laughs, “because she has such a tall stature as a person. She is bold and encourages boldness. She was such a big advocate for me and all of her students.”

While an undergraduate, Duffy also got to know herself on stage as a member of the Winston-Salem Symphony and, of course, with the UNCSA Symphony Orchestra. One of the highlights of her time here came when she soloed for the Symphony Orchestra. “That was a really, really important recognition for me,” she says.

These moments helped prepare her to fulfill her graduate school dream – The Colburn School. “Just getting into Colburn is probably one of my greatest accomplishments. Colburn is the big dream that UNCSA helped me achieve.”

At Colburn, the student has now become the teacher – Duffy teaches a studio of three students and was an instructor this past summer at Porterville Summer Strings, a tuition-free camp in Porterville, Calif. for underprivileged students. While in graduate school, she has also taken top honors in two competitions. In June 2015, she won first place at the International Hugo Kauder Competition for Viola and in October 2015, she won grand prize at the Pasadena Showcase House Instrumental Competition, where she competed with many of her peers from Colburn.

Colburn may have been the big dream, but even during graduate school, Duffy continued to reach for more. In the spring of 2016, she joined the San Diego Symphony.

One thing she knows for sure is that “if you want an opportunity, you have to ask for it.” And she is fully prepared to ask – for the audition, for the time, for the chance to continue to explore her humanity through her music.

When she stops to consider all of the pieces that have fallen into place and led her to where she is today, UNCSA played a major role. “I am so grateful for the Kenan Scholarship and people like Sarah Turner [long-time administrator of the scholarship],” Duffy says. “They changed the trajectory of my entire life and the ways in which I can impact the world.”