Today, students, faculty and alumni from the University of North Carolina School of the Arts (UNCSA) in Winston-Salem will have the unique opportunity to light up the White House. Yes, that White House. 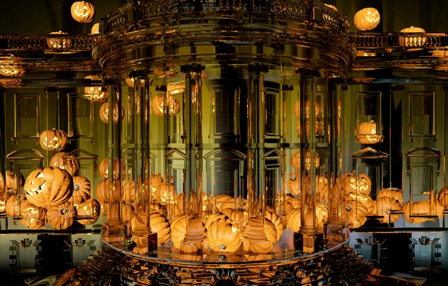 According to Norman Coates, director of the lighting program in UNCSA’s renowned School of Design and Production (D&P) and founder of the Winston-Salem Light Project, the UNCSA group have helped stage the White House for its annual Halloween party tonight. More than 5,000 people are expected to pass through the event, including children of military families and area school children, who will trick-or-treat there. The President and First Lady typically give out treats during the event.

“We designed a projection loop for the South Portico of the White House, creating an ambiance fit for Halloween,” Coates said. “It’s a chance for students to collaborate with successful alumni on a project that will be seen by a whole new audience.”

UNCSA Chancellor Lindsay Bierman said, “This is a tremendous honor and opportunity for our School of Design and Production. Tens of thousands of people see the work of our lighting students and faculty each year through our 300 performances and the Winston-Salem Light Project. We’re thrilled to have a national platform, and there’s no better canvas than the historic, iconic façade of the White House.” 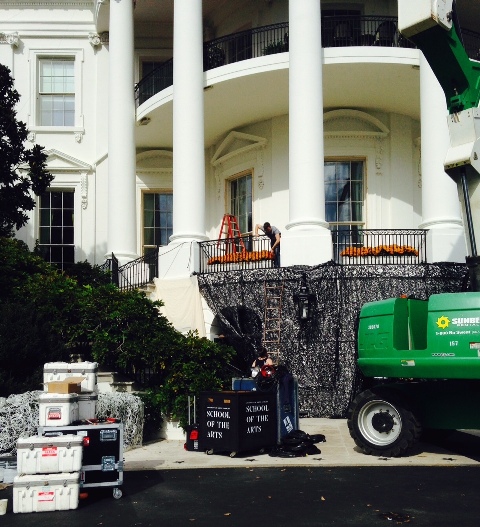 Caption for photo above: Students of the University of North Carolina School of the Arts install equipment on the South Portico of the White House in preparation for tonight’s annual trick or treat event.

Since 2008, Coates and his students have annually lit local landmarks – such as UNCSA’s Roger L. Stevens Center, built in 1929 as a silent movie theatre, and the Millennium Center, a 1906 neo-classical revival style former Federal Court building – through the Winston-Salem Light Project.

UNCSA School of Design and Production Dean Michael C. Kelley said the high-profile project at the White House illustrates particular strengths of the school – connections to industry leaders and engagement of alumni. “Our faculty are working professionals and they have a reputation in the industry for top-quality work,” he said. “That helps us place our students in sought-after jobs with leading companies, and they become valuable partners for us in projects such as this one.”

An alumnus of D&P’s scene design program and two-time Emmy Award winner, Kelley became dean in July after serving for 11 years as senior producer and senior set decorator for Walt Disney Imagineering -- the planning, creative development, research and creative design entity of the Walt Disney Company and its affiliates.

Coates said the school’s participation in the White House project came about because of faculty connections in the industry. Dennis Booth, who teaches technical direction, got a call from a friend who has coordinated the White House’s annual Halloween event for years. “He was looking to do large-scale projection on the building and came to Dennis for advice. Dennis connected him with me,” Coates said. “This sort of thing happens all the time in D&P, but it doesn’t always result in an opportunity to work at the White House!”

About the Winston-Salem Light Project
The Winston-Salem Light Project was created as a teaching tool to expand students’ knowledge about light. Lighting design and technology students apply concepts and techniques learned in the pursuit of theatrical design to architecture and public art, putting aside the script or score and becoming originating artists. This year’s installation is scheduled for April 12-17 at a location to be announced.