Students and employers during an interview session at the School of Design & Production's 19th annual Professional Job Fair.

At the UNCSA School of Design and Production, the jobs come seeking you. At least they do each spring semester for graduating students during the school’s annual Professional Job Fair.

The 19th annual event held this year at the end of February was no exception. With 672 interviews completed over two days, it’s safe to say it was a busy weekend for students and employers alike.

“This is more than just a career fair,” says Jamie Call Blankinship, Stage Management instructor and organizer of the event. “We are asking these companies to engage with our students as teachers and mentors. It’s not just about getting a job. It helps students learn to articulate their passion, their experience and their qualifications.”

The weekend starts with a symposium, where guest professionals and students have an open discussion about entering the job market, followed by portfolio reviews and interview scheduling.

Upon arriving, each company receives a resume book produced by the School of Design and Production. The resume book includes a schedule for the weekend along with the name and resume of each graduating student, organized by concentration. It also includes an overview of each concentration’s curriculum so employers can get a broad overview of students’ skill sets.

Both employers and students are also given “dance cards” to schedule appointments during the allotted interview times with prospective employees and employers, respectively. Scheduling takes place on Saturday, with lightning style interviews taking up the bulk of Sunday.

“It’s kind of like speed-dating,” Call Blankinship says. “Each of the appointments lasts 15 minutes.” The result, she adds, is that students (and employers, for that matter) have to make every minute count and consider how to best represent who they are. 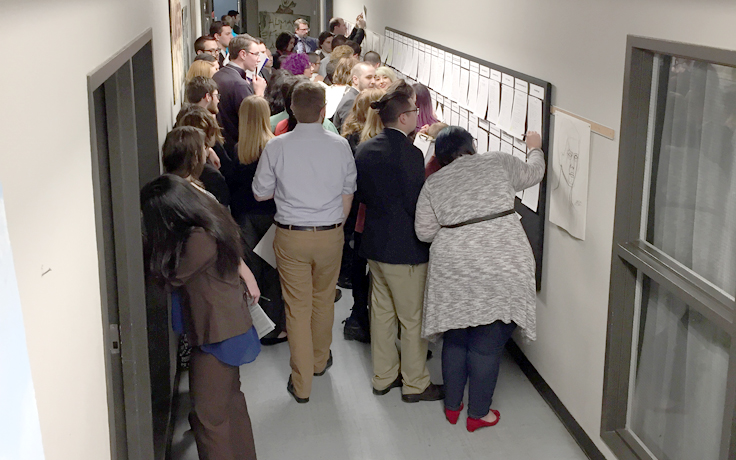 Fortunately, many of the interviewers have themselves been in the same exact hot seat. Of the representatives from each of the 41 companies at the 2016 job fair, almost half were Design and Production alumni. These interviewers have a unique perspective on just how beneficial the event can be for graduating students.

Adam Goodrum is a 2005 graduate of the Technical Direction program who works as the Production Manager at Flat Rock Playhouse in Flat Rock, N.C. He knows firsthand the power of the job fair; he got his first job out of college through it. He’s been attending as an employer for eight years.

“I come to the job fair to hire good employees,” he says. Flat Rock does much of its hiring for summer internships at the fair. “I know what I’m getting at UNCSA. I know who’s teaching the students and that they are trustworthy and hardworking.”

As a 1997 graduate of the Lighting program, Al Crawford, founder and CEO of Arc3design in New York and lighting designer for Alvin Ailey American Dance Theatre, missed out on the first Design and Production job fair by one year. But, like Goodrum, he appreciates the power of the UNCSA network.

“After I graduated, I relied heavily on the network of UNCSA alumni,” he says. “It was a huge piece during my career transitions and it’s important to all students.” The job fair, he adds, has in some ways organized that alumni network into “an opportunity that is incredibly efficient for potential employees and employers.”

Although the event is a requirement for graduating seniors, the job fair is also open to non-graduating students looking for summer work and internships. Underclassmen are encouraged to attend the fair for the same reasons seniors are required to attend – to build their interview skills and learn about the job market.

“We had a freshman attend this year who had 10 interviews,” Call Blankinship says. It’s likely those interviews could pay off at the end of that student’s college career. “It’s competitive across companies. The companies will keep track of first-year students throughout their four years,” and if the timing is right, those students could have job offers waiting for them at graduation.

If nothing else, it’s an invaluable learning opportunity. “It gives students a sense of the job market, where they might have a gap in their skills and what they can do to improve their skill level,” Call Blankinship says.

Not all of the job fair fun is reserved only for students. Design and Production faculty also attend the event, hosting a dinner on Saturday night for the company representatives.

“This gives us an opportunity to meet the companies,” Call Blankinship says. “We can talk to them about the students and make recommendations for interviews. It also gives us the chance to tell them who we are and find out what they’re looking for, which informs us about the industry.”

And more and more companies continue to take an interest. “When I started producing this event, our goal was to have 20 to 25 companies,” Call Blankinship says. “Last year we had 32 companies, this year we had 41. It just keeps getting bigger and bigger.”

“Employers tell us that our graduates are typically three to five years ahead in terms of maturity, skill level and their ability to communicate those skills,” she says. Employers are so impressed, in fact, it’s not uncommon for graduating students to end up with multiple job offers.

It may be more than just a job fair, but it accomplishes perhaps what every job fair aspires to. It connects potential employers and employees in a meaningful way with overwhelming success.

And it certainly helps boost the School of Design and Production’s number one bragging right — a near-100 percent employment placement rate for its graduating students.