The new University of North Carolina School of the Arts website has won a major award in an international competition.

The UNCSA website won a Silver Award in the Institutional Website category of the 2016 Circle of Excellence Awards competition of the Council for Advancement and Support of Education (CASE). The awards were announced last week. 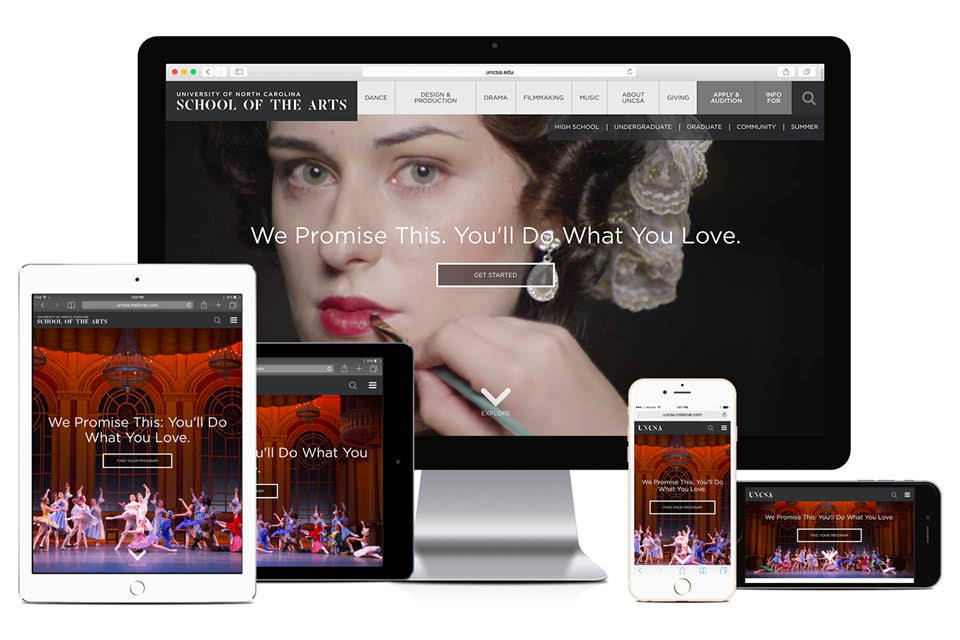 UNCSA Chancellor Lindsay Bierman said, “I’m extremely proud of this award and our digital team, led by Director of Digital Media Claire Machamer. Since day one on the job in 2014, I made it a top priority to design a new website that tells our story, shows our impact and increases engagement. CASE’s recognition is the ultimate vote of confidence in our achievement.”

Director of Digital Media Claire Machamer said, “It was a true campus-wide effort and the results show the benefit of that collaboration. I am looking forward to working with the campus in the future to continue to evolve our online presence.”

The 2016 Circle of Excellence judging panel for the Digital Communications categories consisted of 12 individuals selected for their diverse areas of expertise, knowledge of digital communications, and experience in the field of education. Members of the panel represented a variety of educational institutions, both public and private, as well as digital agencies.

Of UNCSA’s webpage, the judges said: “The UNC School of the Arts identity shines through from the moment the visitor opens the homepage. Every photo feels authentic and shows the level of performance a student would be involved with. The website shows a level of polish that is on par with the results they achieved … Social media is integrated throughout the website through a unique hashtag (#wecreatehere). Overall the website is easy to navigate and highlights their unique character.”

UNCSA had not had a web update in more than 13 years before the new website was launched. A web committee led by Vice Provost and Dean of Students Ward Caldwell and composed of representatives from across the campus took initial steps toward a new website in 2013-14. Upon the new chancellor’s arrival, and with a new visual identity in place, UNCSA hired a leader in higher education websites, mStoner, to create its new website. Machamer was hired in 2015 and put together a new digital media team to launch the new site.

“The award is such an affirmation for the hard work we have put in to make the new website a reality,” said Digital Media team member Elizabeth White, who was initially hired by Caldwell as an Enrollment Management Information Specialist to assist with site migration. White is now a Web Producer.

The CASE Circle of Excellence Awards is an international competition that honors outstanding work in advancement services, alumni relations, communications, fundraising and marketing at colleges, universities, independent schools and affiliated nonprofits.The 2016 competition received 3,356 entries for consideration in nearly 100 categories from more than 713 higher education institutions, independent schools and affiliated organizations located worldwide. More than 350 entries were considered for the CASE Platinum Categories, a collaboration between CASE and its eight districts to recognize outstanding work worldwide.

Peer professionals at schools, colleges and universities as well as professionals from outside of education judged the entries and awarded 331 awards to 197 institutions as follows: 97 bronze; 113 silver, 78 gold and 17 grand gold. In addition, CASE recognized eight platinum winners.

Earlier this year, the UNCSA website was nominated for a 2016 Webby Award, which is the leading international award honoring excellence on the Internet. Reflecting the tremendous growth of the Internet, The Webbys now honors excellence in five major media types: websites, online film and video, advertising and media, mobile sites and apps and social.

The UNCSA website was nominated in the category of school/university websites, along with NYU’s Tisch School of the Arts, USC’s Iovine and Young Academy, Harvard Business School, and Johns Hopkins University. Harvard and Johns Hopkins took The Webby Award and The Webby People’s Voice Award, respectively.

Members of the International Academy of Digital Arts and Sciences select the nominees for both awards in each category, as well as the winners of The Webby Awards. In the spirit of the open Web, The Webby People’s Voice is awarded by the voting public.