Then and Now: The unusual past of UNCSA's buildings

The UNCSA campus is a creative composition of repurposed buildings and gorgeous original spaces like the new Library and the School of Filmmaking's New Media Building. But, like our five conservatories, they work together to create an atmosphere that is as exceptional as our artists.

Plus, you have to give it to the visionaries who first repurposed these buildings. It takes some imagination to turn a former diaper laundry into a paint shop and offices. Take a look at what a few of UNCSA's spaces used to be back then. 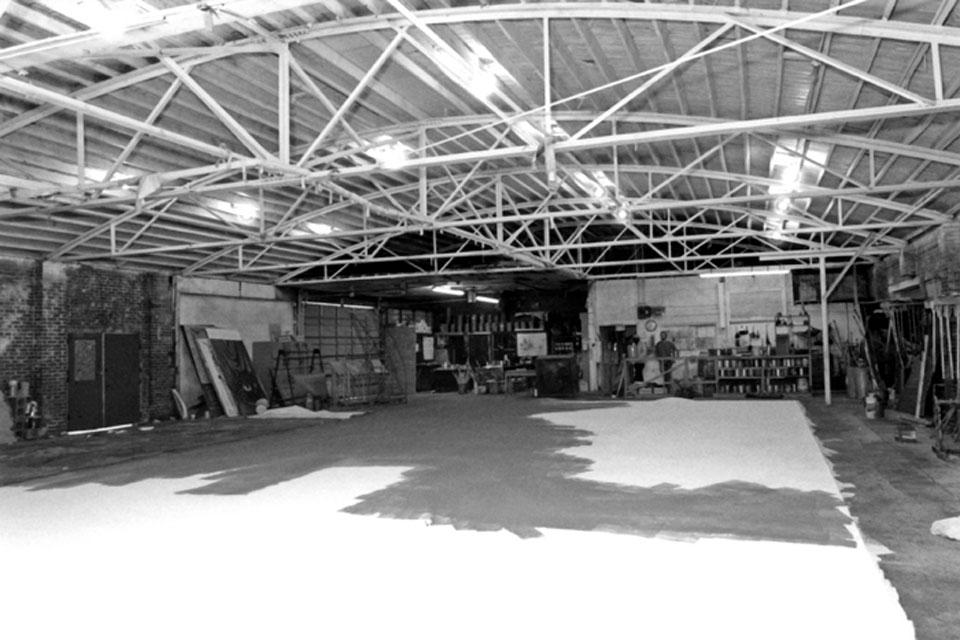 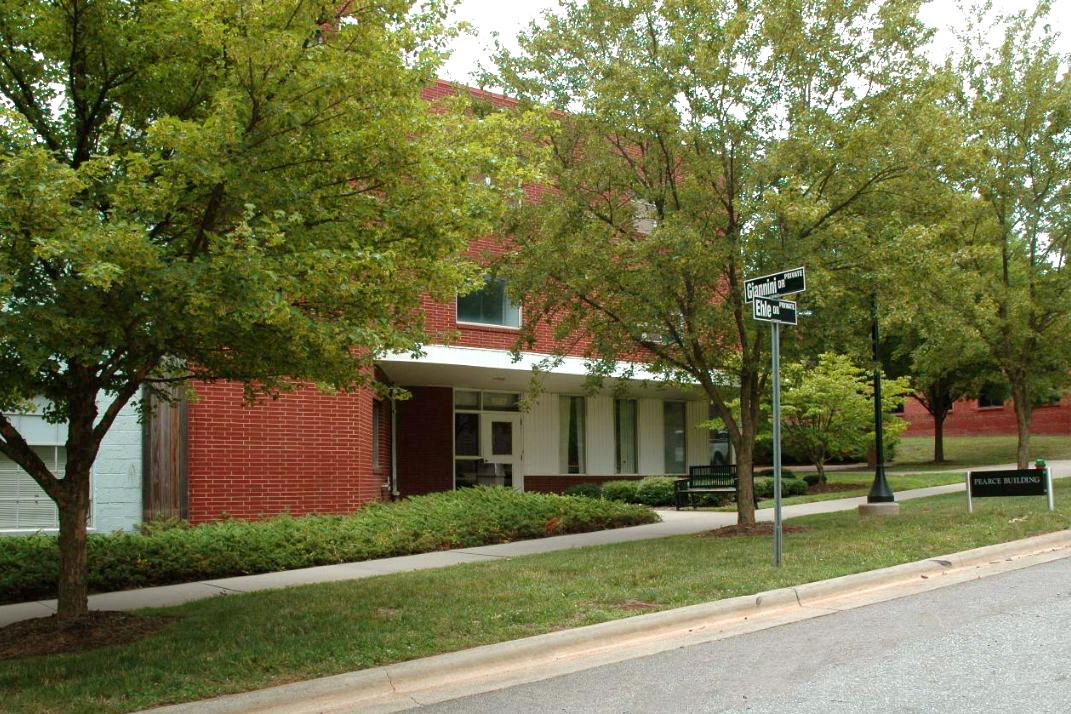 The Pearce Building might get your olfactory senses tingling. The spot was originally home to Pearce Laundry Service, a dry cleaning and diaper laundering service, at one time owned and operated by Myra Gardner Pearce, sister of Hollywood star and North Carolina native Ava Gardner (who reportedly spent some time working at the laundry herself). The building has served a variety of purposes in its life span at UNCSA — it housed the School of Design and Production’s paint shop in the early 1990s before serving as a temporary workspace to the first students in the School of Filmmaking from 1993-1997. In its most recent incarnation, you can find faculty offices and a screening room inhabiting this building.

Then: James A. Gray High School 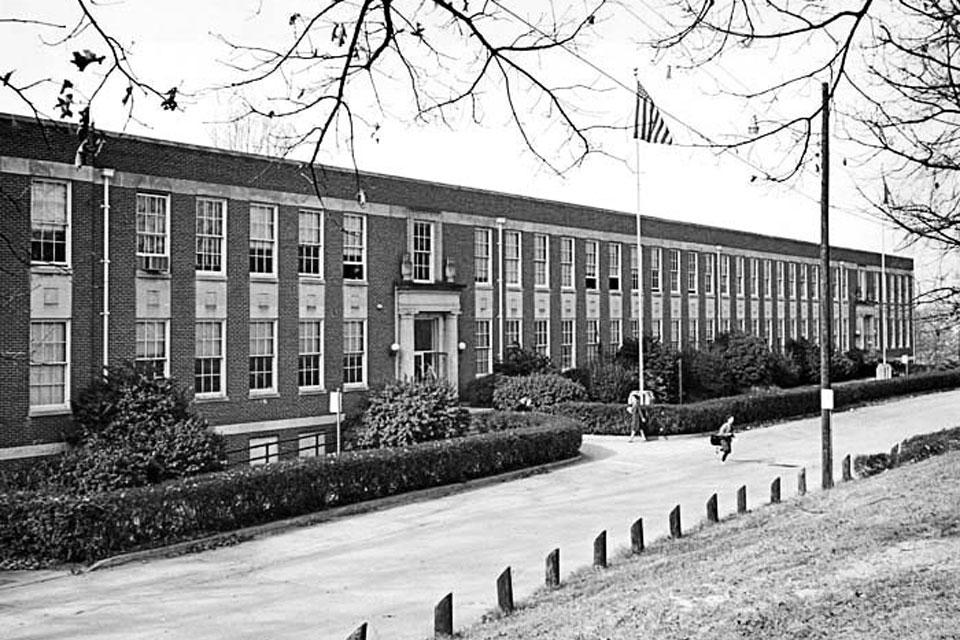 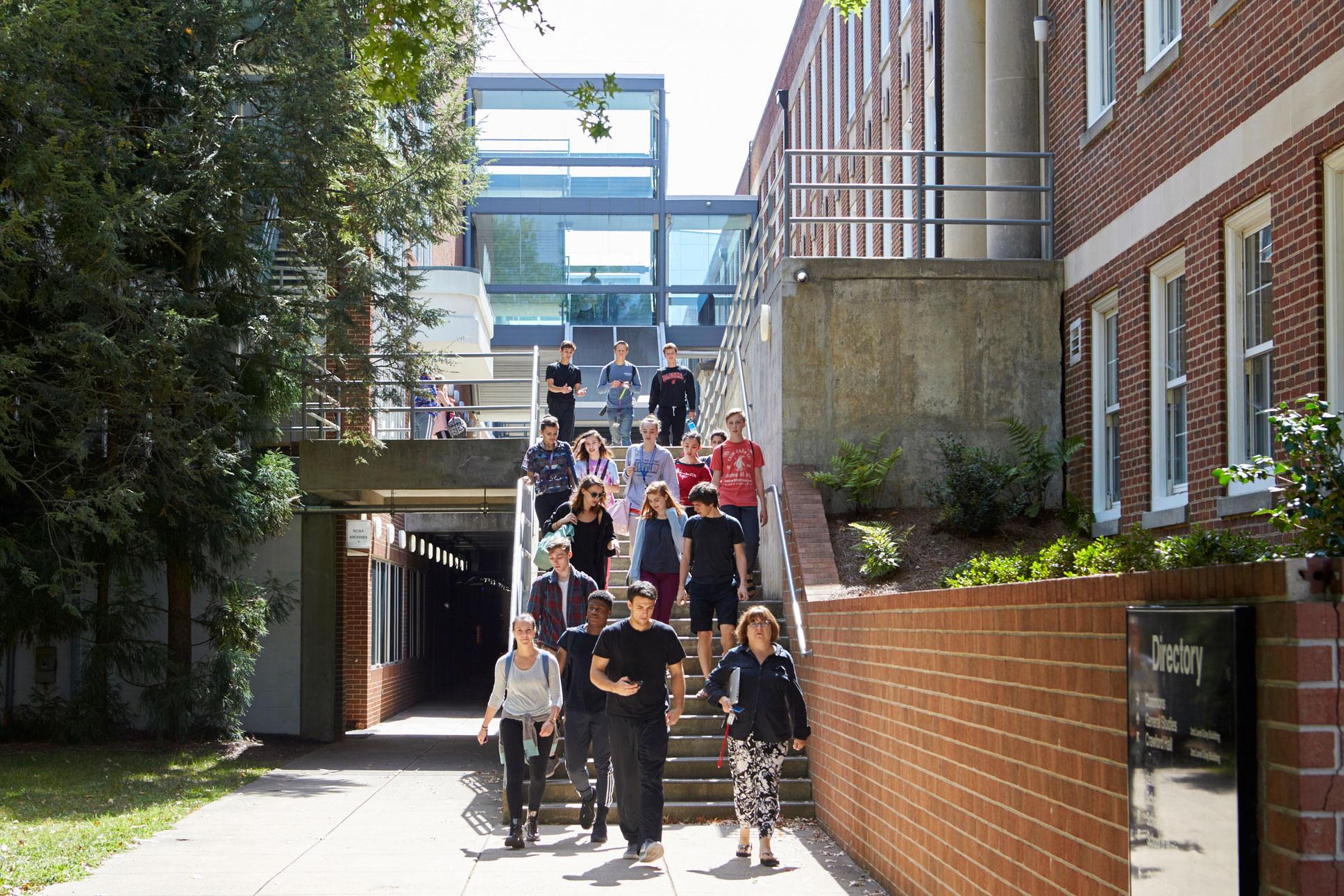 The Gray Building was where it all started for the School of the Arts in 1965. As the founders of the school searched for a home for the first-of-its-kind public arts conservatory in North Carolina (and the country), the Winston-Salem/Forsyth County school system offered up a solution — the former James A. Gray High School campus on Chapel Street. The high school, originally built in 1929 as a junior high, included the Gray Building, a gymnasium (now Agnes de Mille Theatre) and a football field where the Sanford and Moore dorms now stand. The last class graduated from Gray High School just three months before the facility re-opened as the School of the Arts!

Then: Carolina Theatre and Hotel 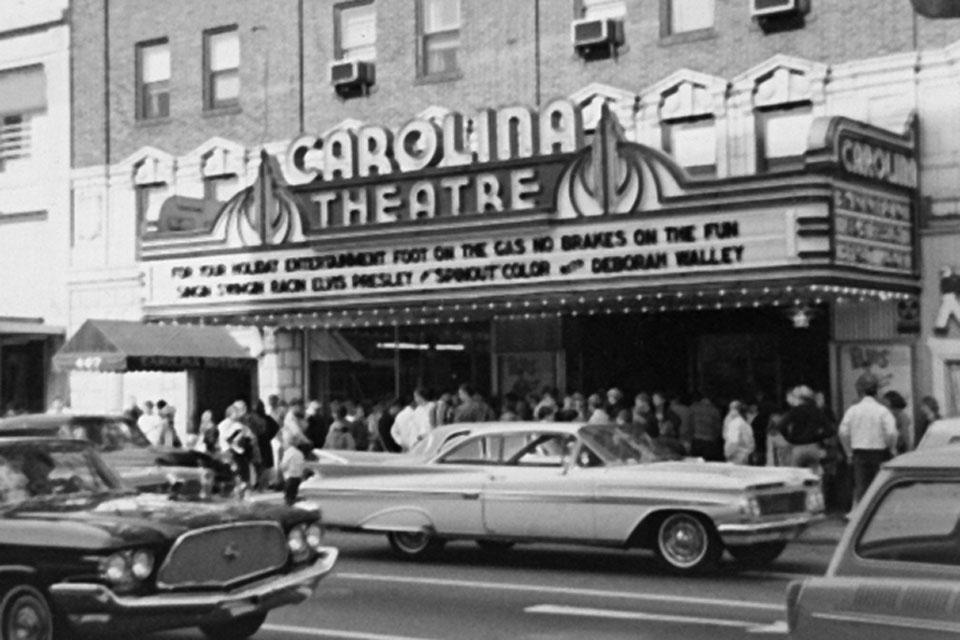 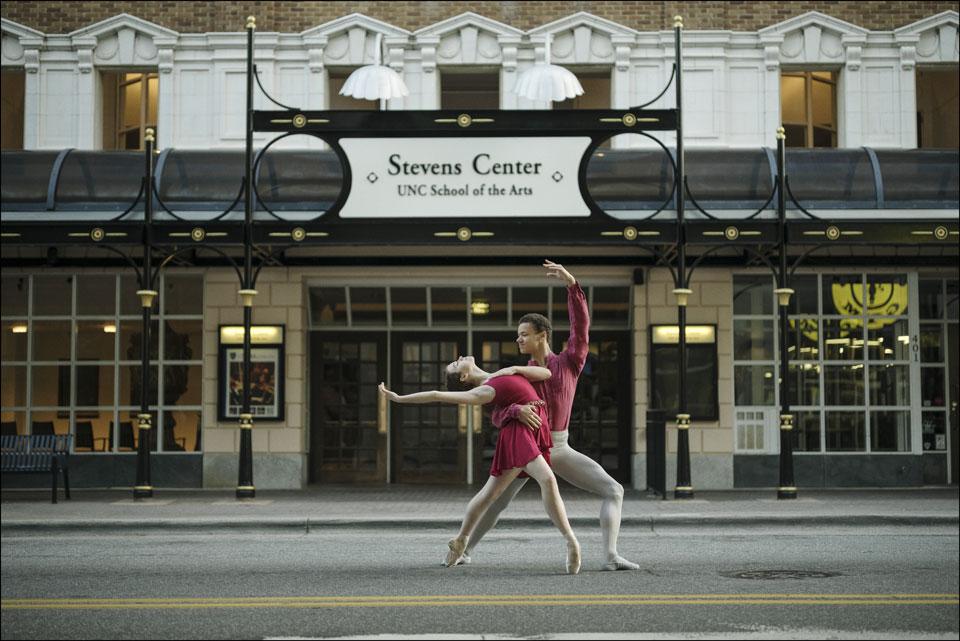 The Stevens Center is one of UNCSA’s crown jewels and the ultimate performance space for students, playing host to everything from UNCSA Symphony Orchestra performances to School of Dance concerts to the annual school-wide production of “The Nutcracker” ballet. Built in 1929, in the first half of the 20th century it was a movie house and hotel known as the Carolina Theatre and Hotel.

UNCSA acquired the building in the late 1970s and re-opened the renovated neoclassical space in 1983 among much fanfare and star-studded celebration. The event was attended by former United States presidents and Hollywood and Broadway royalty, with screen legend Gregory Peck serving as master of ceremonies. The Stevens Center was also one of the projects that helped jumpstart downtown revitalization, which continues to this day. 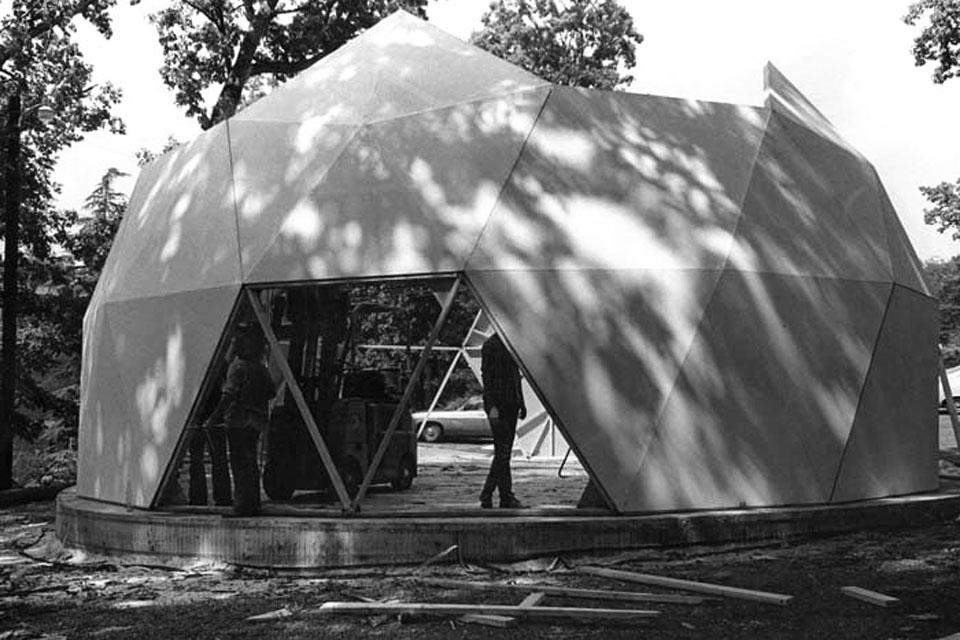 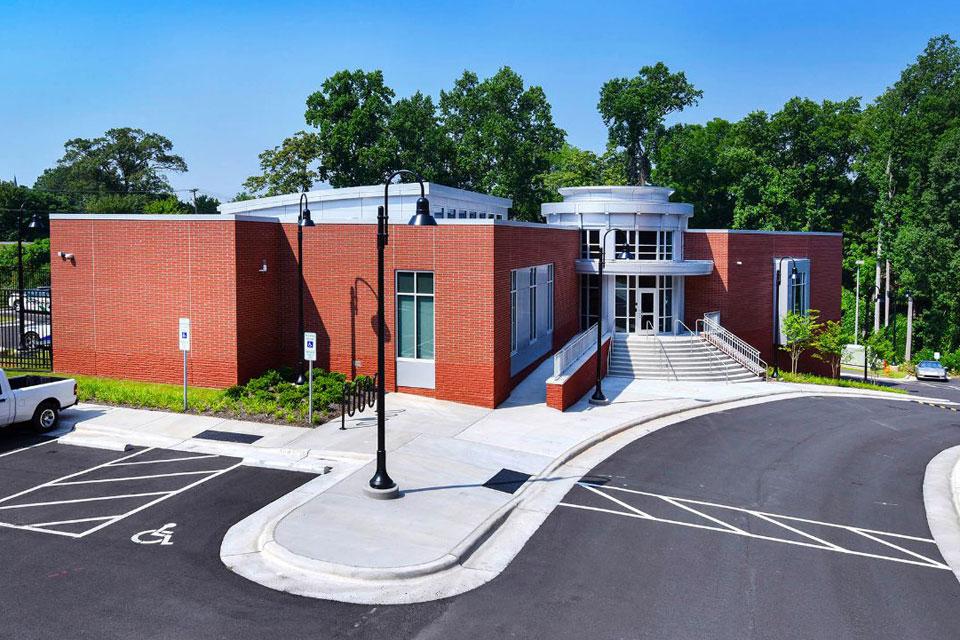 Today’s Campus Police Building may not be the first place you’d think of as a performance space on campus, but in the 1970s a small, somewhat unsual outdoor theatre occupied the area. The geodesic dome theatre, based on a design by American architect Buckminster Fuller, took shape (pardon the pun) in 1972 as renovations were underway at Agnes de Mille Theatre and Crawford Hall. Drama students held a total of 31 performances in the geodesic dome from 1972-76. The final piece of the structure — the round cement slab that served as a foundation — was removed a few years ago to make way for the police building. 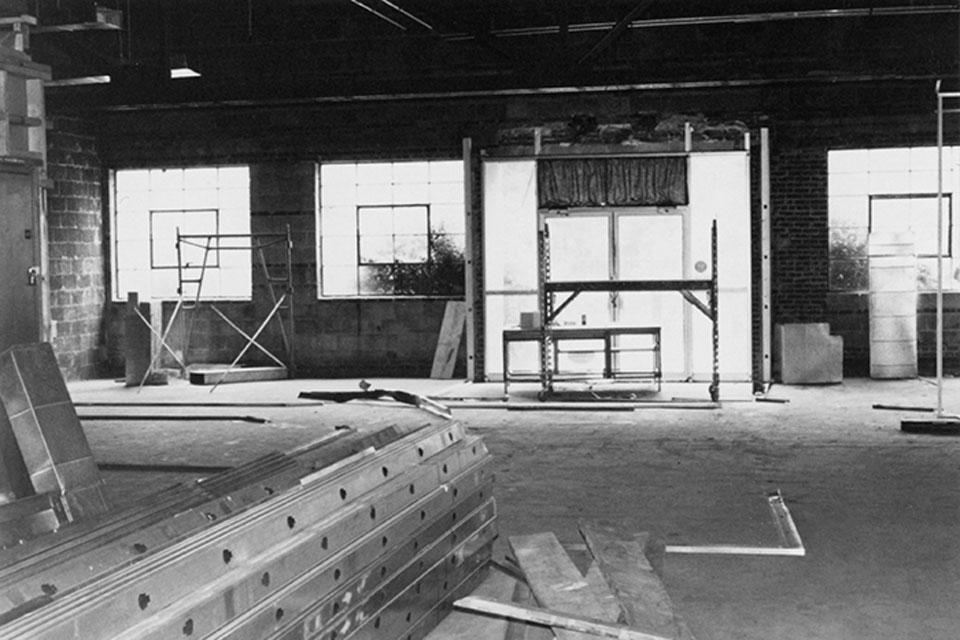 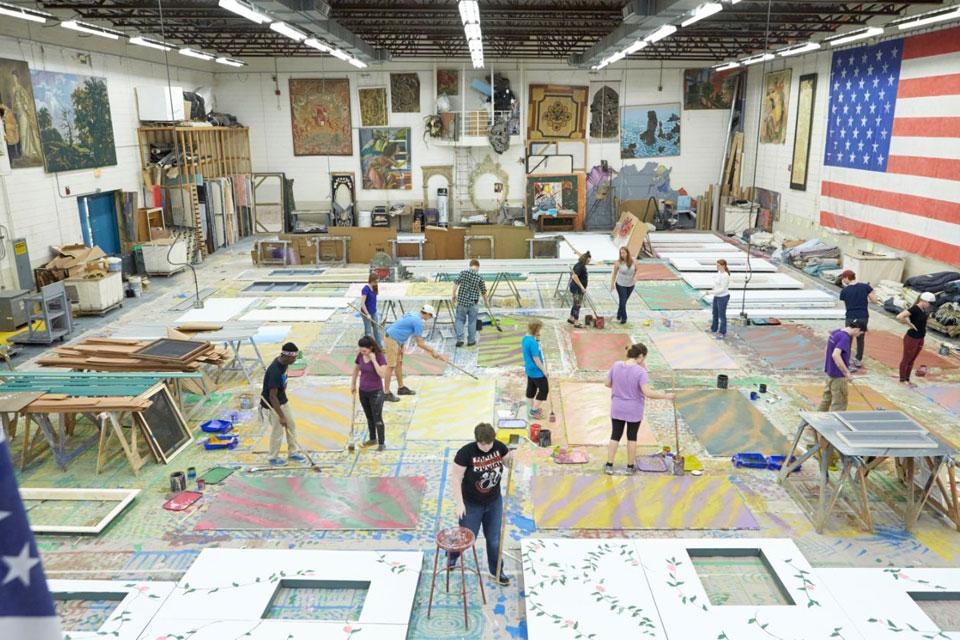 Before housing some of the main production space and offices in the Design and Production Building, Triad Mack Truck Sales and Service occupied the original structure until the late 1970s. The current D&P facility, dedicated in 1991, is about 50 percent Mack Truck building and 50 percent new construction. For the most part, it’s unrecognizable as the former home of a service center for large 18-wheeler transfer trucks, but there are a few vestiges of its past life – the original vault was never removed and is still in use. Just don’t expect to find any treasures in there, it’s now used for storage. Next door, Mack Truck’s administration building found new life as the current UNCSA Administration Building.

These are just a few of the spaces that reflect the amazing talent, creativity and ingenuity that make UNCSA a wonderful place to be an artist. Want to see more of UNCSA or learn more about the campus' history? Explore the virtual Campus Map and check out the great resources (including a list of campus architecture) provided by the UNCSA Library Archives.