When “Still Life with Rocket” debuts April 4 in Winston-Salem, UNCSA’s first public performance of devised theater will be informed as much by the space it’s staged in as by its performers and creative team.

The show will be staged in part of an 80,000-plus square foot warehouse in Whitaker Park, a complex North of downtown consisting of cigarette production and warehouse facilities formerly owned by R.J. Reynolds Tobacco Company.

The Whitaker Park complex, now being developed into mixed-use retail, residential and industrial space, is a key part of the history of Winston-Salem and the tobacco company that shaped much of the city in the 20th century.

“The Whitaker Park site was originally, like most places, just a forest,” says Fam Brownlee, historian for the at the Forsyth County Public Library. “Beginning in the mid-18th century and continuing for 150 years, it was developed as farm land. In the early 20th century, RJR Tobacco bought a chunk of land there and built storage houses for tobacco.”

The groundbreaking for Whitaker Park—named for John C. Whitaker, chairman of the board of directors for R.J. Reynolds Tobacco Company from 1952-59—took place in October 1958. The site was dedicated and started production in 1961. At the time, it was touted as the world’s largest and most modern cigarette-manufacturing plant, according to the Winston-Salem Journal. 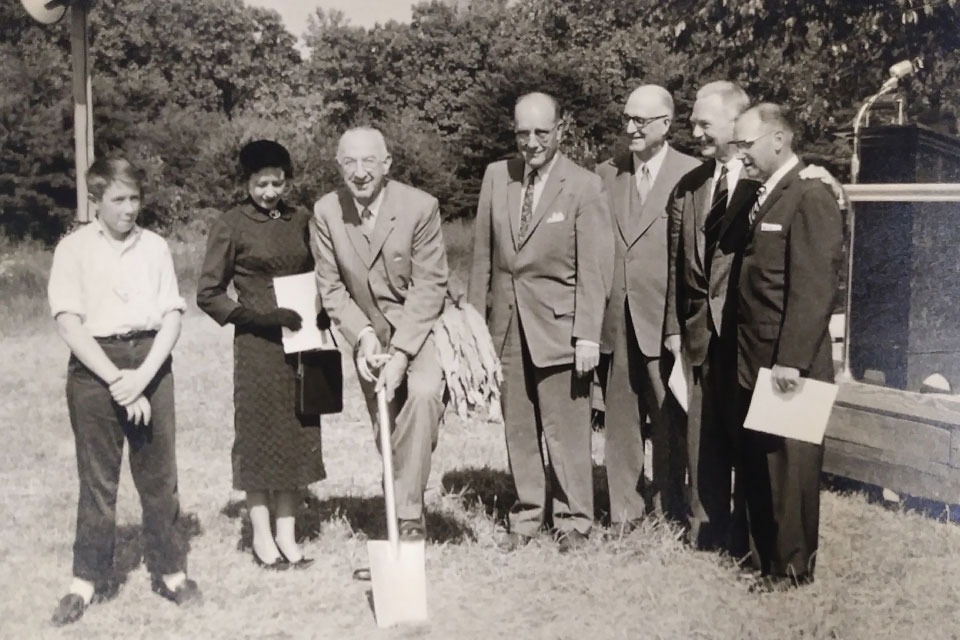 The groundbreaking ceremony at Whitaker Park was held in October 1958. The site's namesake, John C. Whitaker, is third from left with the shovel. / Photo courtesy of Forsyth County Public Library Photograph Collection

The building where patrons will experience “Still Life with Rocket” once housed laboratories for mixing cigarette flavorings, says Robert Leak Jr., President of Winston-Salem Business Inc. and the Whitaker Park Development Authority. It has been empty for about four years.

Perhaps the most interesting and noteworthy features of the building are the elements of safety incorporated into it. “The building has several explosion-proof rooms that were used to store raw materials and finished products,” says Leak.

The weathered wooden floors and exposed brick walls one might expect or imagine in older tobacco warehouses aren’t found in this particular space. Instead, the incredibly thick, solid concrete walls and metal blast-proof doors that separate the building’s rooms dominate the space.

Docking bays, where shipments of menthol were unloaded, line the building and relics of the laboratory space remain—conduit, air vents and other such artifacts.

“It’s like being in the remnants of a huge science lab,” says Mollye Maxner, who conceived “Still Life with Rocket” and is directing the UNCSA production.

A space to experience devised theater

The space is pivotal to the experience of the play. For each performance, audience members will enter in small groups through one of the docking bays and be guided about a football-field’s length into the building. They’ll pass through the explosion-proof doors into the main performance space, a room of about 17,000 square feet.

“The journey starts at the door,” Maxner says, with an art installation, lighting and other imagery along the path to the performance area. “What we are doing is creating a space for the poetry of the play to unfold in a way I don’t think it would in a theater.”

What we are doing is creating a space for the poetry of the play to unfold in a way I don’t think it would in a theater.

She sees many connections between the space and subjects in the play. The piece centers around a family living on a rural plot of land in the mountains and dealing with issues like an economy affected by fading industry, family dynamics, dementia and addiction. The space connects with feelings like loss and decline that surface in the play.

It has been an exciting and unique experience for the entire creative team—designing and creating not only for such a large and non-traditional performance space, but also taking into account the devised theater aspect of the piece.

The location provides a variety of challenges for the technical crew to solve. For Technical Director Jacob Ostdiek, working on the production has been an ongoing adventure. “There is none of the infrastructure in this space that you’d have in a theater,” he says. Every aspect of production must be carefully thought out and infrastructure built in the new space.

Acoustics in the gargantuan building necessitated incorporating headsets that audience members will wear during the performance, which in turn became an opportunity to transform the piece itself, Maxner says. In that way, the space and the play have created a dialogue with one another.

And because the audience is dropped directly into the set, Ostdiek says the creative team has done much more traditional carpentry for this show, “which also holds true to the story,” he adds. “It’s truly 360-degree scenery. You can’t get away with faking it in here.”

The crew planned for unknowns, starting with a design before the cast began rehearsals, and constructed the buildings for the rural mountain property—a mobile home, a shed and other structures—in their entirety before moving them into the space.

They then cut and sliced the buildings to fit both the space and the evolving story created by the performers.

Above: Buildings were constructed in on-campus workshops and transported to Whitaker Park.

The effect, Ostdiek says, is both interesting and disorienting.

Maxner concurs. “There’s a beautiful and disorienting integration between the warehouse space and the scenery,” she says. For instance, walking through the door of the shed structure for the first time was a significant moment for her. “When I walked through the door and was confronted by the wall of the warehouse, I was struck by the intersections of these unlikely parts of life and society.” 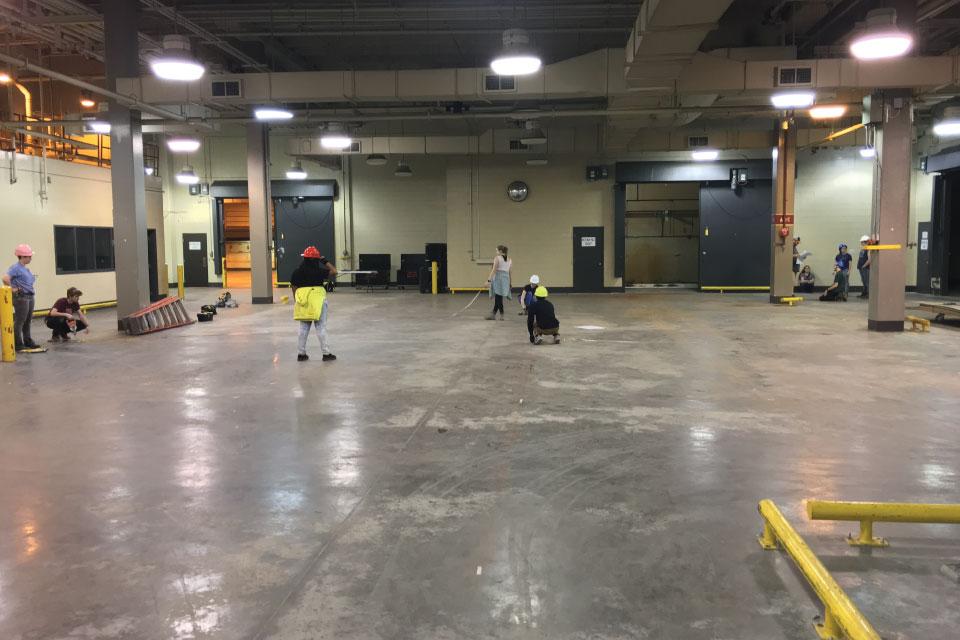 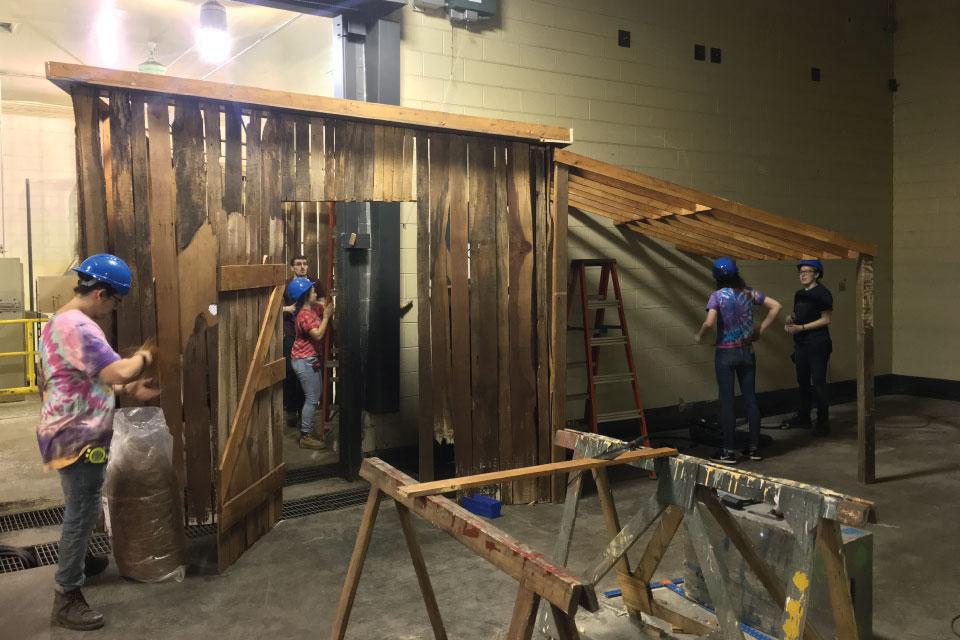 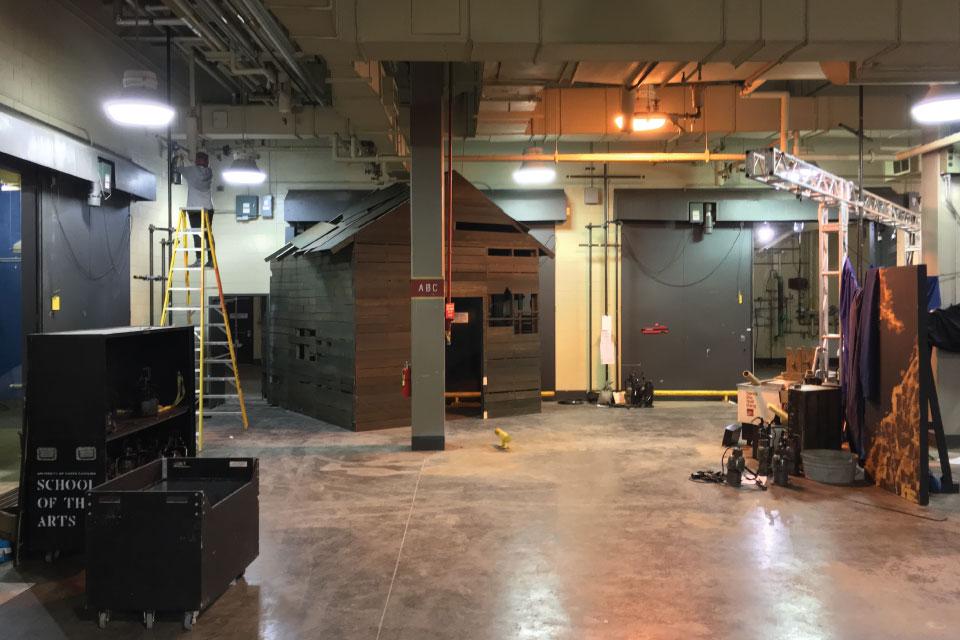 There’s also an intersection between the UNCSA and larger Winston-Salem communities. “The students are learning about different parts of this city. Some even have family friends or family members who worked in Whitaker Park at one time,” Maxner says. “For people in the audience, too, they may end up learning about a part of the city they’ve never been in.”

And, she adds, the production is adding its own entry into the historical record of the space. “The work these students are doing is adding to the history and energy of the building. They are filling the space with so much life.”