Comedian Maria Bamford, known for her Netflix series “Lady Dynamite” and her appearances in the Netflix reboot of “Arrested Development” and the hit ABC series “Fresh Off the Boat,” will appear at the Stevens Center at 7:30 p.m. on Friday, Oct. 4, 2019 as part of the UNCSA Presents 2019-20 season. 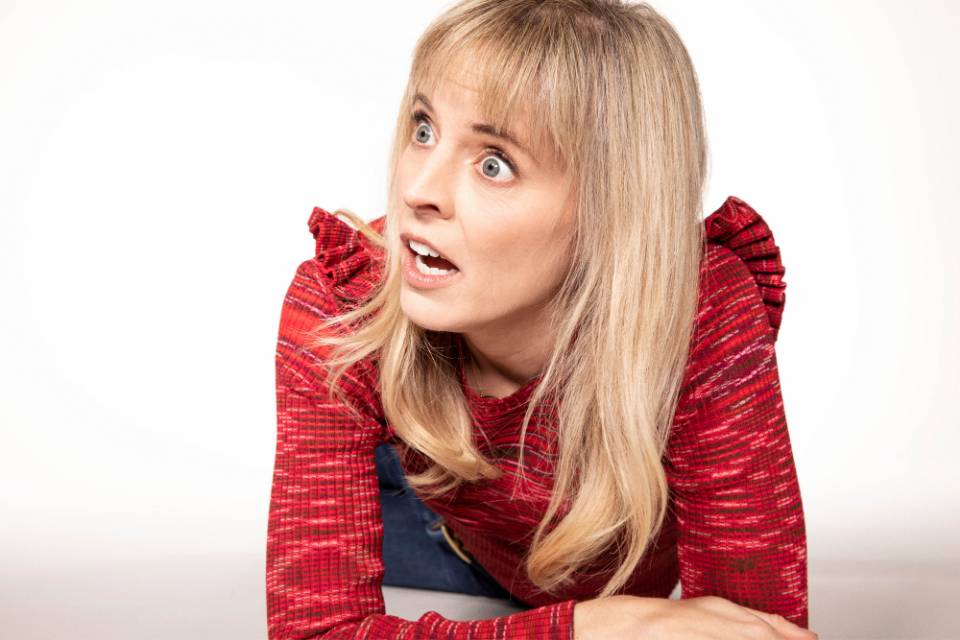 “The Stevens Center is a terrific venue for stand-up comedy, and we’re pleased to present Maria Bamford as the perfect complement to our schedule of Broadway shows, diverse musical acts and immersive entertainment,” said Wiley Hausam, UNCSA’s managing director of performance facilities, who curates UNCSA Presents. The 2019-20 series, announced earlier, includes “Once” and “The Color Purple”; musicians Flor de Toloache and Kathy Mattea; and Erth’s Prehistoric Aquarium Adventures, among other shows.

As a comic, Bamford is known for addressing her own struggles with mental health issues, including bi-polar disorder, obsessive-compulsive disorder, anxiety and depression. She’s starred in two half-hour Comedy Central specials, and has appeared on late-night shows including “CONAN,” “The Tonight Show,” “The Late Show with Stephen Colbert” and “Late Night with Seth Meyers.”

Judd Apatow, producer of HBO’s “Girls” and the feature film “The 40 Year-Old Virgin,” has described her as “the most unique, bizarre, imaginative comedian out there.” Of her stand-up appearance in London, The Guardian wrote: “The celebrated standup mines her self-doubt and general bafflement with life in a fine hour of extreme idiosyncrasy.”

Since 2013, Bamford has appeared in “Arrested Development” as a recovering meth addict. The show’s creator Mitchell Hurwitz has called her “a genius” and “a real artist,” adding, “Real artists talk about things that nobody else talks about, and talk about them candidly.”

She has also appeared on television in “Louie,” “Portlandia,” and “The Sarah Silverman Program,” and has voiced countless characters in animated television series, including “SpongeBob SquarePants,” “The Adventures of Puss in Boots,” “Kung Fu Panda: Legends of Awesomeness,” and the Emmy-winning PBS series “Word Girl.” Bamford has won four Behind the Voice Actors Awards and an American Comedy Award as best club comic.

In a 2014 profile of Bamford, The New York Times wrote, “Her act is a series of monologues and mini-skits performed rapid fire and often without regard for transition. Deploying a range of deadpan voices, she mimics the faux-enlightened who hover around the afflicted, offering toothless platitudes…. The humor of any given moment relies not so much on punch lines as it does on the impeccably timed swerves of her tone.”

Maria Bamford starred in and executive produced the semi-autobiographical Netflix comedy series “Lady Dynamite,” created by Mitch Hurwitz (“Arrested Development”) and Pam Brady (“South Park”). She is also the creator and star of “Maria Bamford: The Special Special Special” and of the cult hit web series “The Maria Bamford Show.” She was the first female comic to have two half-hour Comedy Central Presents specials and starred alongside Patton Oswalt, Zach Galifianakis and Brian Posehn in the Comedy Central series “The Comedians of Comedy” and Netflix’s “Comedians of Comedy: The Movie.”

Bamford has voiced characters on countless animation series including “Big Mouth,” “Talking Tom and Friends,” “BoJack Horseman,” “Adventure Time,” “Bob’s Burgers,” “Legend of Korra,” “Puss in Boots,” “CatDog” and PBS’s Emmy-winning series “Word Girl.” She played DeBrie Bardeaux on the Netflix reboot of “Arrested Development” and had a recurring role on the hit ABC series “Fresh Off the Boat.” Her late-night appearances include “CONAN,” “The Tonight Show,” “The Late Show with Stephen Colbert” and “Late Night with Seth Meyers.”

She is the 2014 winner of the American Comedy Award for best club comic.