Mary Lynn and John Wigodsky are the 2020 recipients of the Giannini Society Award, one of the most prestigious honors bestowed by UNCSA.

The Giannini Society was established in 1989 and was named in honor of Vittorio Giannini, a founder and the first president of the School of the Arts. It is a group of dedicated ambassadors who provide leadership annual support for UNCSA and its students.

The Giannini Award is given annually to members of the society in recognition of their service and support. Previous recipients include founders, board members, alumni, volunteers, and former chancellors and faculty members. 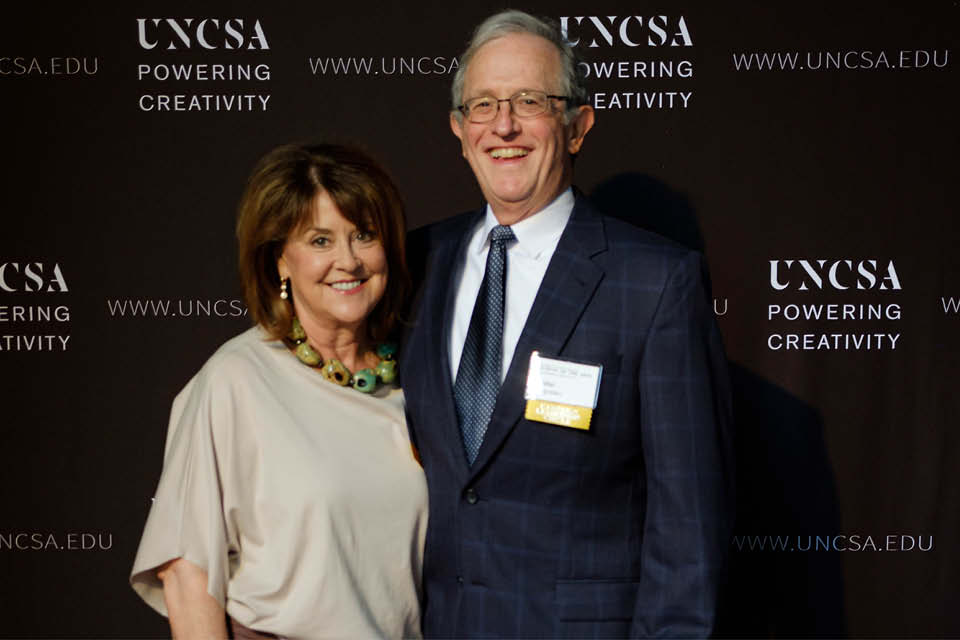 “We are thrilled to be able to recognize John and Mary Lynn with the Giannini Award,” said UNCSA Chancellor Brian Cole. “The enthusiasm, generosity, care and leadership they have demonstrated on behalf of UNCSA is truly special.”

The Wigodskys have a long legacy of service to UNCSA, as members of the Giannini Society and the Campaign Leadership Circle for Powering Creativity: The Campaign for UNCSA, the largest comprehensive fundraising effort in school history. As a part of their own campaign gift, they created the Mary Lynn and John Wigodsky Scholarships in the schools of Dance and Music.

“John and Mary Lynn have incredible passion for the work that our students, faculty, staff and alumni are doing, and have found countless ways to support those efforts,” said UNCSA Vice Chancellor for Advancement Edward J. Lewis III. “Their leadership during Powering Creativity: The Campaign for UNCSA has been outstanding, and they are deeply trusted friends and partners of our university.”

The Wigodskys were introduced to UNCSA through the late Cranford Johnson, then head of residence life and later dean of student affairs, and Sarah Lu Bradley, a residence adviser and later director of counseling, who invited Mary Lynn to conduct medical staff training at UNCSA. They fell in love with the school and were among the founding members of many volunteer programs that continue to thrive at UNCSA, including the Host Family Program  ̶  which connects residential high school students with local families who can assist with needs, arrange outings, attend performances and more.

The passion that Mary Lynn and John have for UNCSA is overwhelmingly shown when they speak from their hearts about the development of future artists at the school.

As members of the volunteer group The Associates, they have opened up their home for Salon@Six receptions with UNCSA artists, and have hosted guest artists and faculty. They assisted with the opening of the Stevens Center, UNCSA’s downtown performance venue, in 1983.

The Wigodskys have taken on many leadership roles at UNCSA, including their service as members of the Giannini Advisory Committee since 2014, and several years as chairs of that organization. They have helped increase new member participation and retention for the Giannini Society. John has served on the UNCSA Foundation Board since 2015 in various roles including treasurer and vice president. He is the incoming president of the UNCSA Foundation Board. The Wigodskys are also members of the Dean’s Councils for the School of Music and the School of Dance.

They have also served the wider community since moving to Winston-Salem in July 1973, when John began his marketing career at the Hanes Corporation, where he remained for the next 13 years. Mary Lynn began work at Mandala, a private psychiatric hospital, where she developed the department of nursing and the inpatient therapeutic community program. Both found opportunities to share their expertise with others: Mary Lynn taught psychiatric and mental health nursing for five years at UNC-Greensboro and John was an adjunct professor at the Wake Forest University Babcock School of Management.

The Wigodskys have also been active community volunteers and supporters of other essential nonprofits in the community. Mary Lynn was active with CHANGE (Communities Helping All Neighborhoods Gain Empowerment) and led a team to bring stricter childhood lead poisoning rules to Forsyth County. This team pressed the city and county to apply for federal HUD grants for lead abatement, leading to more than $5 million in funding to improve the safety of housing for young children. She also consulted with the Wake Forest School of Medicine’s Translational Science Institute to develop a number of community engagement initiatives, and pursued her interest in community mental health by serving on the boards of the Fellowship Home, the Prodigals Community and Hawley House. She also serves on the Wake Forest University School of Divinity Board of Visitors.

John was also active with the CHANGE organization and Industries for the Blind, chairing the finance teams for both.

They have served other local arts organizations such as North Carolina Dance Theatre’s Friends of Dance and SECCA Friends at the Southeastern Center for Contemporary Art.

Mary Lynn and John met as students at Duke University while serving on the campuswide Judicial Board. They married after completing graduate school – Mary Lynn at Yale and John at Massachusetts Institute of Technology. They have two daughters, the Rev. Andie Wigodsky Rohrs of Norfolk, Virginia, and Ellie Wigodsky of Asheville, and three grandchildren.

“The passion that Mary Lynn and John have for UNCSA is overwhelmingly shown when they speak from their hearts about the development of future artists at the school,” said Anne and Steve Sessions, fellow UNCSA supporters and the recipients of last year’s Giannini Award. “They attend every gathering where they may have an opportunity to be ambassadors for the school and they stay focused on that point without hesitating to ask for support when appropriate.”