In his nearly 25 years with the A.J. Fletcher Opera Institute (and even before it was known as such), Steven LaCosse has seen highs, lows and plenty of unprecedented situations. That's perhaps what has helped him, as the Institute's Artistic Director, navigate the waters of 2020 and the current COVID-19 restrictions so adeptly.

The Institute has adjusted everything from its repertoire to its rehearsal processes to accommodate social distancing requirements, with a dexterity that has allowed for some compelling results.

Flexibility has been at the core of LaCosse's UNCSA experience from the start. "I came to Fletcher quite by accident, actually," he says. He knew James Allbritten, Music Director of the UNCSA opera program, from his studies at Indiana University. When Allbritten called him and asked for his help filling a stage director role at the school in 1996, LaCosse was still singing and performing himself. "The timing just worked out perfectly," LaCosse recalls. He had done some directing before and was between roles.

The following year, the opportunity arose to apply for a position full-time. "I loved living in New York City, but I had no singing work lined up that fall," he says, so he decided to apply and was offered the job. "It was a three-year position and still left me time to sing, so I figured 'why not?'." 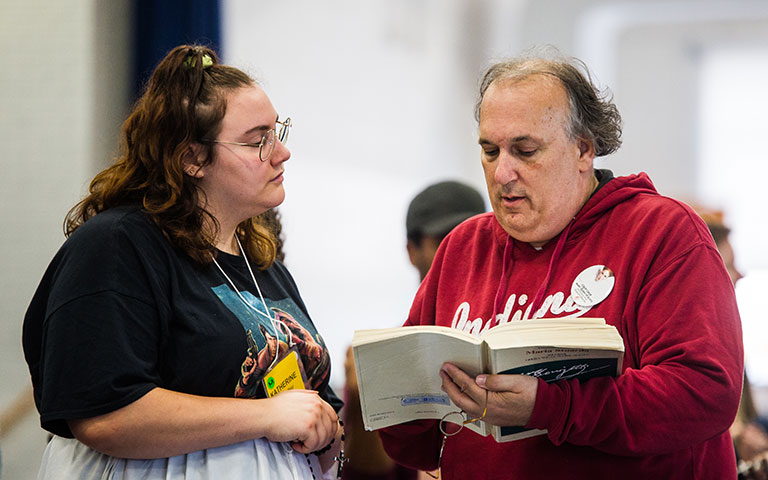 LaCosse working with a voice student during a 2019 rehearsal of "Maria Stuarda."

With LaCosse on board, Allbritten let his goal of creating a "number one opera program" be known. In 2000, the financial support needed to help make that goal a reality came into being in the form of a $10 million gift from the A.J. Fletcher Foundation, which established the A.J. Fletcher Opera Institute at UNCSA.

With the mission of educating rising young opera singers and increasing educational outreach in the community, the gift established fellowships that allow the Institute to cover the cost of singers' tuition, along with a yearly stipend. It has also helped strengthen and establish relationships with several regional opera companies, among them Winston-Salem's own Piedmont Opera.

When the school received the gift, LaCosse knew where his path lay. "I had to stay and see this through," he recalls. He already knew what the program could do with base level funding, and he saw the chance to amplify that and accomplish Allbritten's vision.

LaCosse likewise knew that having a good program was about more than just having the best singers. "You need good designers, supporting singers, guest artists," he says. With that in mind, the Fletcher gift also provides scholarship funding to graduate students in the School of Design and Production and undergraduate voice students.

Fellows are encouraged to work at festivals over the summer and are also given the chance to sing with Piedmont Opera. The Fletcher Institute's outreach work is also done through Piedmont Opera.

Our job is to give young artists the tools they need so that when an opportunity presents itself, they're ready for it. We can't give them the opportunity, but we can prepare them for it.

LaCosse says the program's approach has always been to prepare singers for what's next. "Our job is to give young artists the tools they need," he says, "so that when an opportunity presents itself, they're ready for it. We can't give them the opportunity, but we can prepare them for it."

To accomplish that, he makes sure he personally stays plugged into the industry. He has spent the last four years serving as an auditions coordinator for the Metropolitan Opera for the North Carolina district. "I'm at that table and I can hear what it is they're currently looking for," he says. Likewise, his relationships with alumni help him keep his ear to the ground for trends in the industry.

He's also directed at The Princeton Festival for 15 years, has worked with The Opera Theatre of the Rockies Vocal Arts Festival for 21 years and Piedmont Opera for 17.

In fact, LaCosse and Allbritten, in part as a response to COVID-19, have been joining Piedmont Opera (at first daily, now weekly) on Facebook Live for "Opera Talk," where they discuss the Met Opera's free streaming performances.

"We have done 65 to 70 'Opera Talks' at this point," he says. "I'm so grateful for that. Nothing can take the place of in-person performances, but it has been so nice to connect with people in that way."

As part of that COVID-19 response, LaCosse, along with the Fletcher leadership team, has had to tap into his adaptability again this year in the wake of the unique restrictions facing musicians and artists.

Preparations started in the spring, beginning with the selection of fellows and the 2020-21 repertoire. "There are a lot of pieces to this puzzle," he says. "We had to spend time thinking about what we could do to still give the fellows the best education. We are still figuring things out, but I know we will all learn something from this."

When it became clear that rehearsal spaces would also need to be modified, the Institute found a unique solution: they were able to rent ready-to-go rehearsal space in the form of a vacant office in downtown Winston-Salem. The space includes three glass-front offices where singers can sing without masks, but still be observed and receive feedback from instructors. It also frees up space for other programs on the UNCSA campus. Take a look at Fletcher's downtown home in this behind-the-scenes video:

This season's repertoire was selected in the spring with social distancing limitations already in mind. In February 2021, fellows will perform two salon operas by Manual Garcia, "Un avvertimento ai gelosi" (A Warning to Those Who are Jealous) and "Le Inglesi" (The English Woman), and their May performance will feature two French operas, "Sophie Arnould" by Gabriel Pierné and "L'heure Espagnole" (The Spanish Hour) by Maurice Ravel. The titles were chosen for their limited number of roles and necessary accompaniment.

"These are good stories with good characters," LaCosse says, but allows the program to follow social distancing guidelines for both singers and accompanying musicians. The works also allow the Institute to use one set for all operas (with some modifications). All performances this season will be livestreamed from the Stevens Center, with tickets on sale soon.