The A.J. Fletcher Opera Institute presents a French opera double bill selected to accommodate COVID-safe performance protocols adopted by professional opera companies. “Sophie Arnould” by Gabriel Pierné and “L’heure espagnole” (“The Spanish Hour”) by Maurice Ravel will be livestreamed for free from the Stevens Center at 7:30 p.m. Friday, May 7, and 2 p.m. Sunday, May 9. Tickets are available online or by calling the box office at 336-721-1945.

Steven LaCosse directs the two one-act operas from the 20th century, with musical direction by James Allbritten and music preparation by Angela Vanstory Ward. The operas will be sung in French with captioning by UNCSA Faculty Emeritus Nancy Goldsmith.

It is the second program of one-act operas presented by Fletcher Opera this year to maximize performance opportunities during the pandemic. “It is especially challenging for opera singers to perform during the pandemic because their vocal projection can carry respiratory droplets farther than speaking,” LaCosse said. “We have been grateful to have the ability to perform operas in the pandemic.”

One-act operas often have small casts – three for “Sophie Arnould” and five for “L’heure espagnole” – which allows for socially distant staging. “Simply put, the one-act operas created a space with fewer people on stage for a shorter period of time,” said soprano Virginia Sheffield, who performs the title role in “Sophie Arnould.”

Care is taken so that all performers and production staff feel safe when they are working in the space, LaCosse said. In rehearsals, singers and musicians are either masked and socially distanced or separated by screens.

"The singers also decided to test every day we sang without masks on stage. We each had typical PCR tests as well as rapid antigen tests to be as safe as possible. With smaller cast size, this testing was easily accomplished,” Sheffield said. 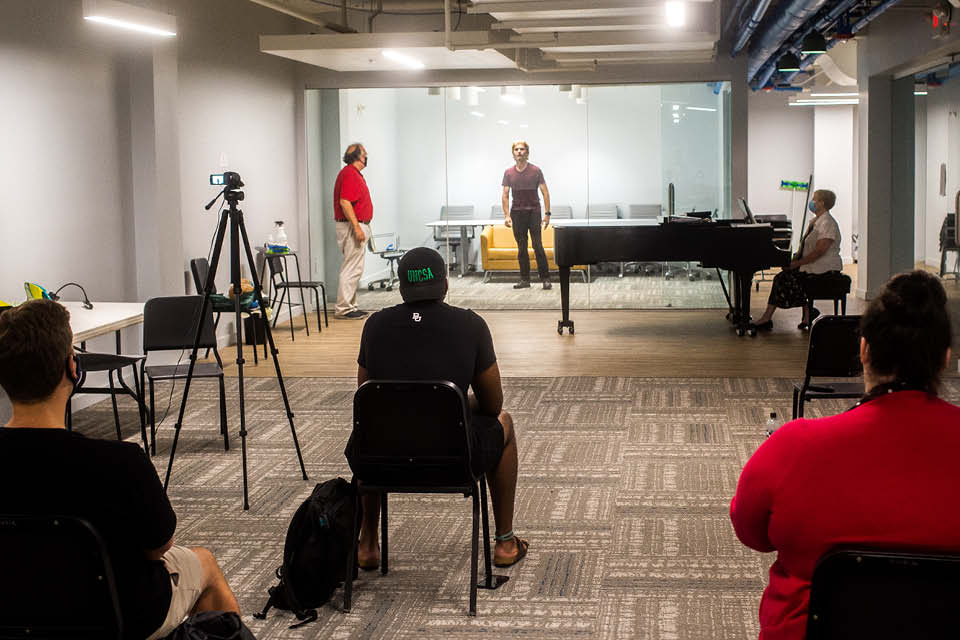 Fletcher Opera Institute was able to secure a dedicated classroom and rehearsal space in downtown Winston-Salem this year. It has a large area for staging, glassed-in classrooms for lessons and coaching sessions, a kitchen, restrooms and a common area that is large enough to accommodate several people while maintaining social distancing.

Based on a short play by Gabriel Nigond, “Sophie Arnould” premiered in Paris in 1927. It focuses on the life of the French soprano who performed with Paris Opera in the last half of the 18th century. Celebrated for her singing, she was also known for her many tumultuous love affairs. The opera illustrates Sophie’s reunion with her long-term lover, the Comte de Lauraguais (Dorval), after the French Revolution. Now retired, Sophie reveals a long-held secret.

“Sophie Arnould is a feminist figure,” Sheffield said. “She was a woman who took control of her finances, her family, and her life in a time when most women were barred from such independence. She is the epitome of the modern woman.” 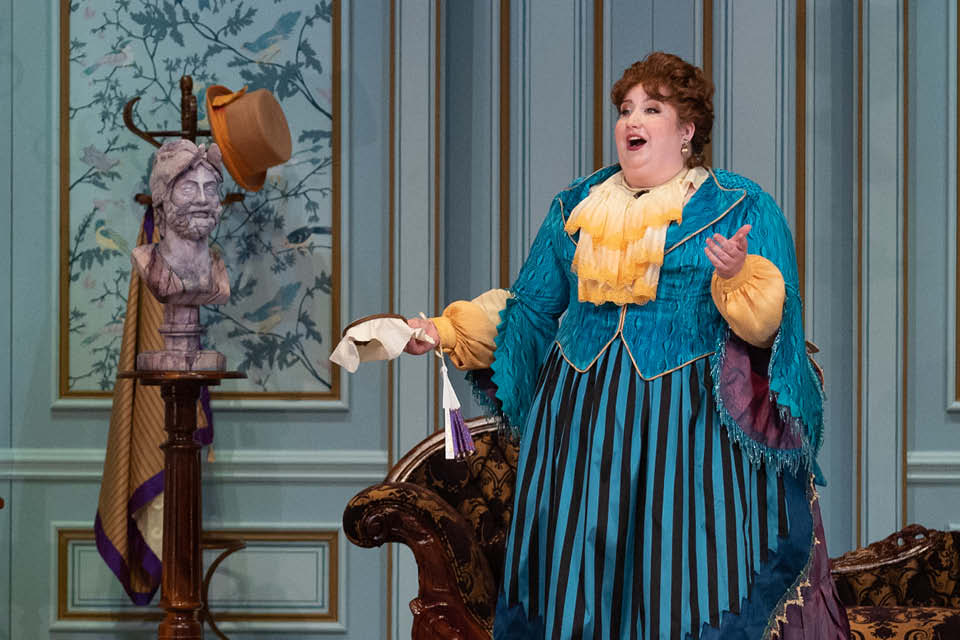 Sophie has escaped Paris during the revolution and is living in a dilapidated monastery with her maid and son. “She is nostalgic for her life in Paris, when she was revered by her fans and desired by all. Only one suitor claimed her heart, however, and she is forever dismissing memories of him until he appears at her door,” Sheffield said. “Ever the survivor, Sophie will do what she must to carry on. Longing and passion imbue this moving piece and so, although the situation is unlike anything we may recognize today, the intimacy, true love and compassion are timeless.”

Sheffield said Sophie is a multifaceted character. “While she can be hilarious, she can also break your heart. She is genuine, strong, and unapologetically herself. I have loved researching and analyzing this role. Everything Sophie says has hidden tiers of meaning to it, and, as an actor, finding those secret emotions that lie beneath the surface is like discovering hidden treasure,” she said, adding “Sophie is the treasure, though. She has much to teach us all about what we think we want and what life can be when we indulge too far in the dream.”

Musical Director Allbritten reduced the “Sophie Arnould” score from a standard opera orchestra to a string quintet, piano and harpsichord.

“L’heure espagnole” (“The Spanish Hour”) is a 1911 comic opera by Maurice Ravel with liberetto by Franc-Nohain, based on Franc-Nohain's 1904 play of the same name. Set in Spain in the 18th century, it is about a clockmaker, Torquemada, whose unfaithful wife, Concepción, hides her lovers in the clocks. 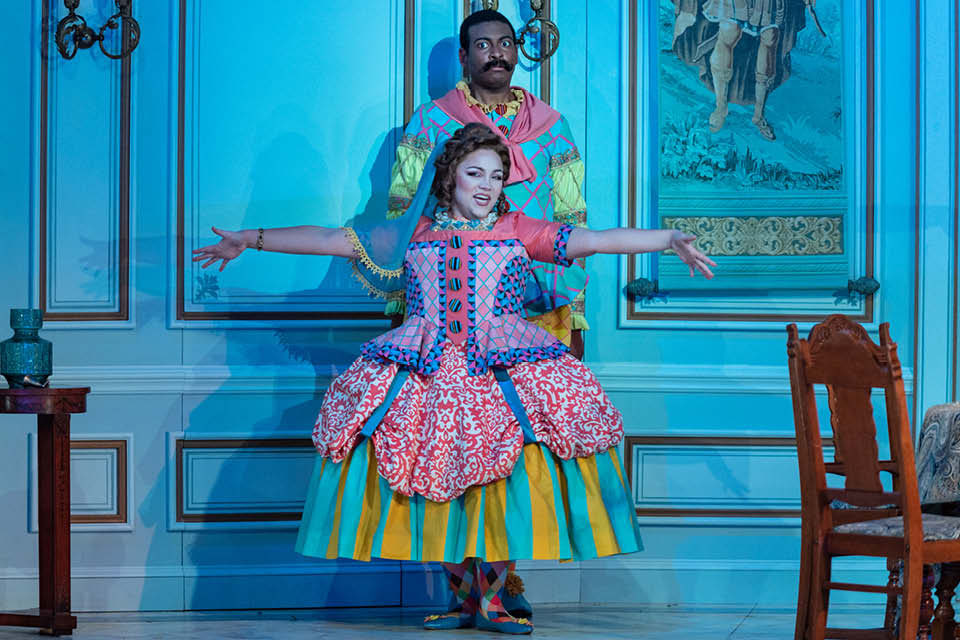 “Concepción is a colorful character indeed! She has loads of personality. She's sassy, sultry, frustrated and demanding,” Zentner said. “She's described in the score as ‘coquettish’ which is absolutely true! Playing ‘commedia dell'arte’ characters is a lot of fun because I feel that it gives me a lot of freedom to try things on stage and act totally ridiculous.”

Zentner said the role lies in the middle of her vocal range. “It’s a difficult spot for most sopranos,” she said. “The role has strengthened that area of my voice. It has challenged my acting and my vocal technique,” she said.

British opera conductor Jonathan Lyness reduced the original score for violin, bassoon, harp, piano and percussion. Fletcher Fellow Caroline Barclift Hayes has been the rehearsal pianist and will play the piano part with the orchestra.