The UNCSA Symphony Orchestra returns to the Stevens Center stage with a performance of Shostakovich's Symphony No. 5, led by acclaimed guest conductor and alumnus Robert Franz, at 7:30 p.m. Saturday, Sept. 18. This is the first of three programs this season featuring the full orchestra performing for live audiences after a yearlong absence due to COVID-19.

Tickets are $20 regular and $15 student and are available online or by calling the box office at 336-721-1945. UNCSA students, faculty and staff receive complimentary tickets. With health and safety as a top priority and in compliance with the citywide indoor mask mandate, audience members (and musicians as practical) are required to wear masks regardless of vaccination status. 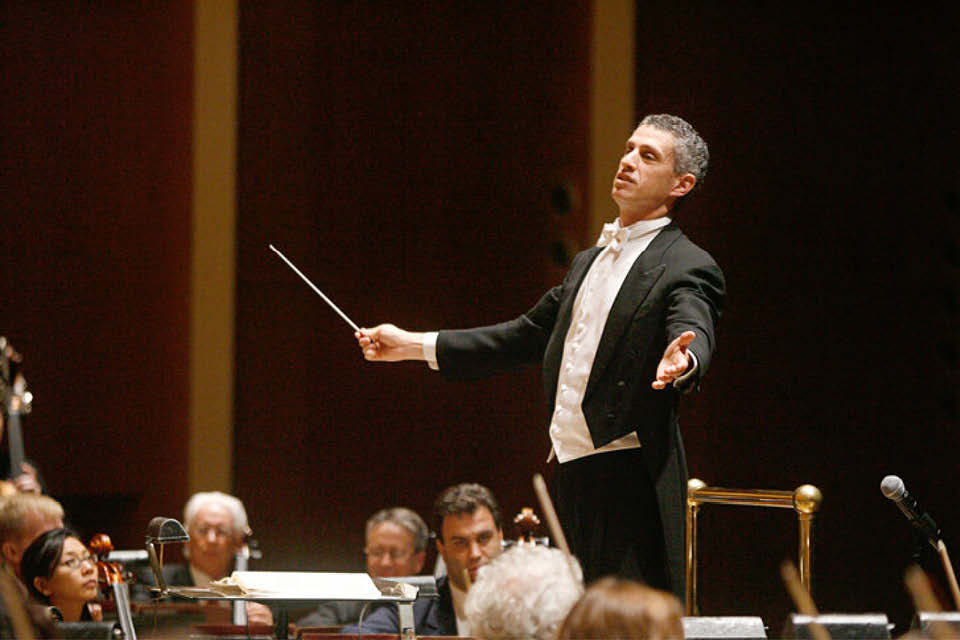 Alumnus Robert Franz will conduct the UNCSA Symphony for a program that includes Shostakovich's Symphony No. 5 on Sept. 18. / Photo: Mark Dellas

“Shoktakovich's fifth symphony is a musical mystery,” Franz said of the Shostakovich work. “Through this symphony we are invited into the mind of a composer who is torn between love of country and hatred of the oppressive political system that ran it, with a real fear for his safety and the safety of his family. The tightrope that Shostakovich had to navigate to keep the authorities happy and speak his mind has meant that there are secret codes embedded throughout this piece. The revelation of secrets and search for the true meaning of the music is what inspires musicians around the globe every time this piece is performed.”

The program opens with the Overture for Orchestra by Grażyna Bacewicz, a leading female composer of the mid-20th century who wrote from behind the Iron Curtain in Poland. It also features 2021 UNCSA Concerto Competition winner and guitarist Harry Ngo performing the well-known Concierto de Aranjuez by Joaquín Rodrigo. 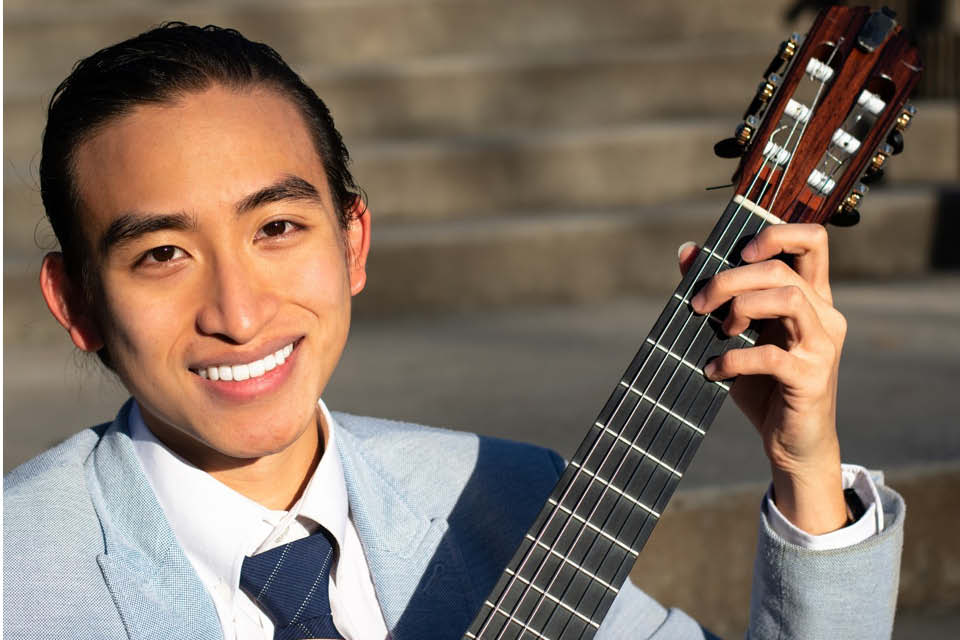 Guitarist Harry Ngo will be soloist with the UNCSA Symphony Orchestra on Sept. 18.

Franz received his Bachelor of Music in oboe performance in 1990 and was the first graduate student to earn a Master of Music in orchestral conducting in 1992. Recognized as “an outstanding musician with profound intelligence” (Classical Voice North Carolina), he is music director of the Windsor Symphony Orchestra, associate conductor of the Houston Symphony and artistic director of the Boise Baroque Orchestra. He was a guest conductor of the Winston-Salem Symphony in January 2019 after serving as a musician apprentice for the organization in the past.

“To say I’m excited to be coming back is an understatement,” Franz said, adding that he last conducted the UNCSA Symphony Orchestra as a graduate student in the spring of 1992, for Elgar’s “Enigma Variations” and Brahms’ Serenade No. 2 in A major.

“When I was a high school student growing up in Davidson, North Carolina, I wanted nothing more than to be a musician. Auditioning and getting in as an oboist was nothing short of miraculous to me. My six years at UNCSA were formative, life-changing, and allowed me the skills and confidence to launch my career,” Franz said.

Dean of Music Saxton Rose said, “We are thrilled to welcome one of our most celebrated alumni back to campus for the first concert of the full orchestra since 2019. We have selected our programs very carefully this year to showcase the talent and discipline of our student-artists, who have continued to perform and grow in their craft throughout the pandemic. It is entirely fitting that their first concert of the year will be conducted by a musician who performed on the same stage as a student and has built a stellar career.” 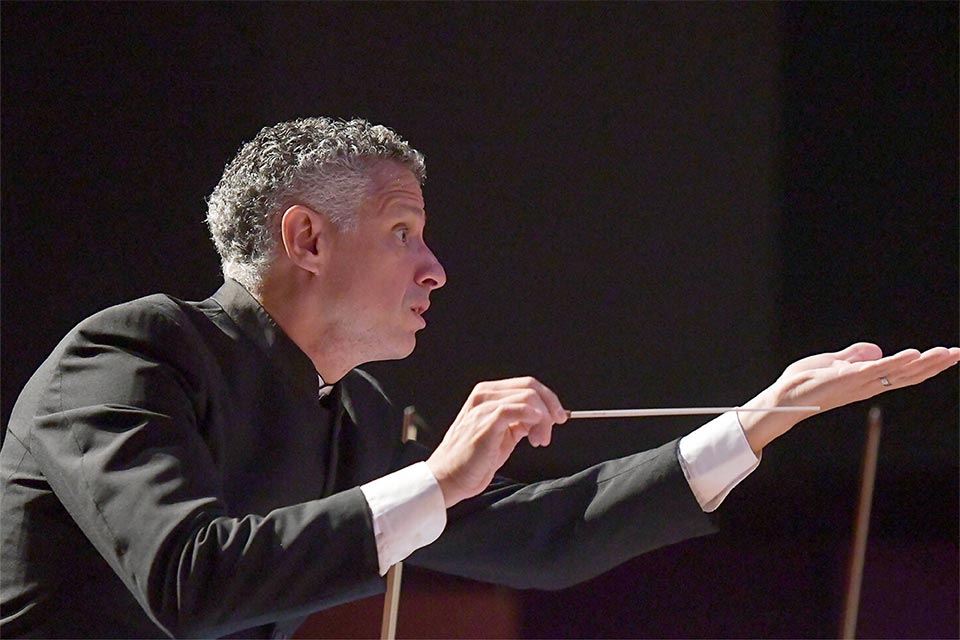 Alumnus Robert Franz will be artist-in-residence in the School of Music. / Photo: Isaac Ortiz

Franz will serve as artist-in-residence in the School of Music, leading orchestra rehearsals during the week leading up to the Sept. 18 concert. Rose said other opportunities for Franz to engage with students will be planned. “Robert Franz is both a brilliant musician and a passionate educator. Our students will be eager to engage with an alumnus who is known as a leader in the profession.”

Soloist Ngo is a college senior from Hanoi, Vietnam, who studies with Joseph Pecoraro, chair of the guitar department at UNCSA. Ngo graduated from the high school Music program in 2018.

Robert Franz has held to three principles throughout his career: a commitment to the highest artistic standards, creating alliances and building bridges in each community he serves, and a dedication to being a strong force in music education. As music director of the Windsor Symphony Orchestra, associate conductor of the Houston Symphony, and artistic director of the Boise Baroque Orchestra, he has achieved success through his focus on each of these principles.

This year marks his debut with the Detroit Symphony Orchestra. Upcoming guest conducting engagements include Tulsa's Signature Symphony and returns to the Louisville Orchestra and the Austin Symphony. His appeal as a first-rate conductor and enthusiastic award-winning educator is acclaimed by critics, composers and audiences of all ages. Composer Bright Sheng praised Franz for his “extremely musical and passionate approach towards music making.” Franz is in increasing demand as a guest conductor, having collaborated with the Cleveland Orchestra, Baltimore Symphony, St. Louis Symphony, Rochester Philharmonic, North Carolina Symphony, Phoenix Symphony, and Italy’s Orchestra da Camera Fiorentinas. His versatility has led to performances with a wide array of artists, including James Galway, Joshua Bell, Rachel Barton Pine, Chris Botti, Idina Menzel and Judy Collins, and composers such as John Harbison, Jennifer Higdon and Jordan Pal. An eloquent speaker, Franz recently presented a TEDx Talk entitled “Active Listening and Our Perception of Time.”

In his eighth season as music director with the Windsor Symphony Orchestra, Franz was recognized by the Windsor Endowment for the Arts with its Arts Leadership Award. Faced with the challenge of maintaining a vital arts presence in the midst of a pandemic, he led and hosted two curated digital concert series during the 2020-21 season. Both series included his trademark music introductions, interviews with guest artists and composers, and a celebration of multiple works by five composers of color. Recent collaborations include the Windsor International Film Festival, Art Gallery of Windsor, Windsor Public Library, Canadian Historical Aviation Association and the University of Windsor.

Franz serves as artistic director of the Boise Baroque Orchestra where he curated and led two digital concert series during the 2020-21 season. Under his leadership, the orchestra has collaborated with Grammy Award-winning tenor Karim Sulayman, and will undertake its first commercial recording project of Classical Oboe Concerti for Centaur Records featuring rising star oboist Bhavani Kotha.

This season Franz celebrates his 13th year as associate conductor of the Houston Symphony where he was recently honored with the Raphael Fliegel Award for Visionary Leadership to celebrate his immense success in advancing the organization’s education and community engagement activities. The 2020-21 season featured Franz leading the North American premiere of author Dan Brown’s musical children’s book “Wild Symphony.”

As cofounder and conductor of the Idaho Orchestra Institute, now in its fifth year, Franz takes young musicians on an exploration of major orchestral repertoire that explores the complete musician.

In addition to his current posts, Franz served as music director of the Boise Philharmonic from 2008-2016 and the Mansfield Symphony (Ohio) from 2003-2010. When not on the podium he can be found on the slopes, skiing slowly and carefully, stretching in a yoga class, and noncompetitively trying his hardest to win at a game of cards with his family.