The Reynolda Quartet, acclaimed faculty-artists in the School of Music, will perform Farewells and Swan Songs at 7:30 p.m. Sunday, Nov. 21, in Watson Hall. North Carolina Symphony principal cellist Bonnie Thron will join the quartet for Schubert’s String Quintet in C major. Also on the program is Dvořák’s String Quartet in D minor.

Tickets, at $25 regular and $20 student, are available online by calling the box office at 336-721-1945. UNCSA and Wake Forest University students, faculty and staff get in free with advance registration. Watson Hall will be open at full capacity and audience members are required to wear masks. The concert will also be livestreamed for free as part of the Live from Watson Hall series. Register online for streaming instructions.

The quartet includes world-renowned musicians Ida Bieler and Janet Orenstein, violins; Ulrich Eichenauer, viola; and Brooks Whitehouse, cello. Founded in 2019 to illustrate a progressive partnership between two of Winston-Salem’s premier cultural organizations, Reynolda House Museum of American Art and UNCSA, the quartet performed its first concert on Feb. 1, 2020, at Reynolda House. It will perform again at Reynolda House in March 2022. 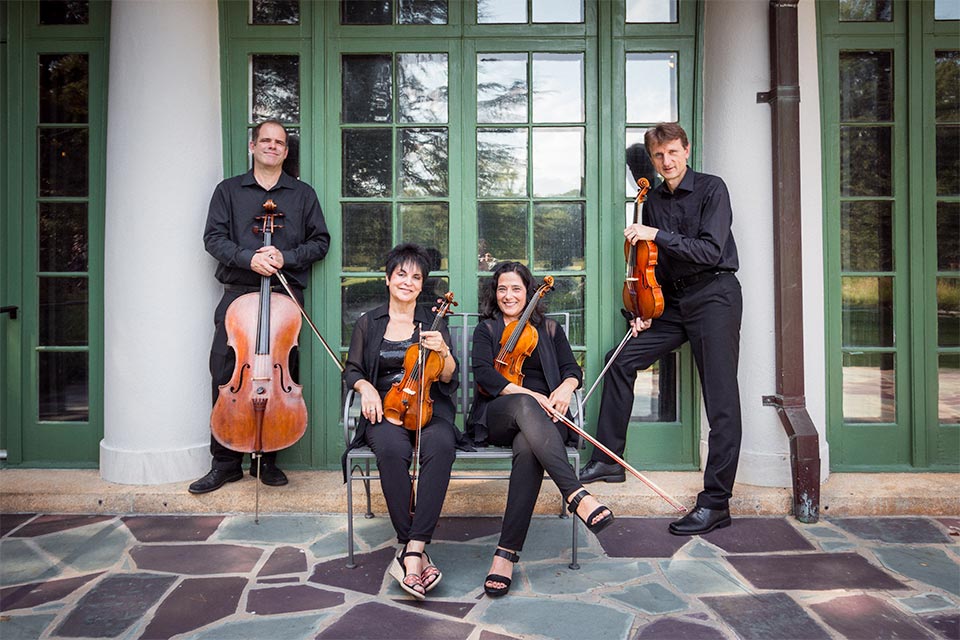 "Winston-Salem is richly provided with world-class collections of art and decorative arts, and those of us fortunate enough to live here have endless opportunities to hear world-class music,” said Phil Archer, deputy director of Reynolda House. “We are thrilled that the Reynolda Quartet will continue to delight audiences this fall and spring with performances that are sure to revive the senses, much like a trip to Reynolda.”

The title of the concert refers to Ancient Greek mythology, which claims that the swan sings a single song of exquisite beauty just before its death. Schubert finished his transcendent C major string quintet in his final weeks of life, and many consider it his greatest instrumental work. Finished in 1828, the quintet was not performed publicly until 1850.

Schubert’s unusual choice of a second cello as the quintet’s fifth voice, rather than a more traditional second viola, adds richness and depth to the string quartet sound. For that reason, Whitehouse said, cellists hold the piece close to their hearts.

"People hear it and wonder why there aren’t more cello quintets,” he said. “Every cellist lives for the opportunity to play this piece of music.”

Though Schubert wrote the music in his final days, Whitehouse said it is not morose, but life affirming ‒ alternating between vivacious, energetic music and ecstatically broad depictions of eternity. “It is remarkable to me that Schubert cared so much about this piece that he gave so much of himself when he really was not well. It is heavenly, and when you are playing it or listening to it, you just want it to go on forever.”

Like the Schubert quintet, Dvořák’s D minor quartet "alternates between the robust and the timeless, with a slow movement that is a sort of melancholy sister movement to the quintet's great Adagio,” Whitehouse said.

Dvořák composed his deeply personal String Quartet in D minor in 1877, a year of tragic loss for his family, with the death of two very young children. It was dedicated to his benefactor, Johannes Brahms.

"You get a sense of yearning, just a tinge of longing” in the quartet, he said. “There’s a sense of eternity, that this music doesn’t even belong to us. It just continues on after you’ve finished playing.”

It is remarkable to me that Schubert cared so much about this piece that he gave so much of himself when he really was not well. It is heavenly, and when you are playing it or listening to it, you just want it to go on forever.

At one point in the music the cello is playing under sustained melodies of the violins and the viola, in what the members of Reynolda Quartet have called “the eternal heartbeat,” Whitehouse said. “The movement expresses something much larger than sorrow or human sadness.”

When planning to perform the Schubert quintet, guest artist Thron was a natural choice for the second cello. She and Whitehouse, who are both originally from New Hampshire, were music stand partners in a youth orchestra while in high school.

Thron joined the North Carolina Symphony as principal cellist in 2000. As an active chamber musician and recitalist, she has performed with the Mallarmé Chamber Players and the Ciompi Quartet and has joined the Jacobowitz-Larkin Duo to form a clarinet trio called Three For All. She has been a guest artist with the American Chamber Players in Washington, D.C., and performs regularly in the district’s Musica Viva series. Thron has played and recorded with the Orpheus Chamber Ensemble. As a guest artist and chamber music coach, she has had a long history with the Apple Hill Chamber Players, including the group’s first Playing for Peace tour to the Middle East in 1991. Previously Thron was a member of the Peabody Trio in-residence at the Peabody Institute when the group won the Naumberg International Chamber Music Competition.

For the past several summers, she has been a guest artist and teacher at the East Carolina University Summer Chamber Music Institute. She also plays in the Sebago Long Lake Music Festival in Maine.

Early in her career, Thron was assistant principal cellist of the Denver Symphony for a season. She has performed concertos with the North Carolina Symphony, the Orpheus Chamber Ensemble, the Juilliard Orchestra, the Panama National Orchestra, the Vermont Symphony Orchestra, and various other orchestras in North Carolina and New Hampshire.

Thron received both bachelor’s and master’s degrees from The Juilliard School. Her teachers include Lynn Harrell, Norman Fischer and Elsa Hilger.

About the Reynolda Quartet

An alumna of the UNCSA School of Music, Ida Bieler joined the faculty in in 2013 and was named artistic director of the school’s Chrysalis Chamber Music Institute when it was formed in 2015. She has won prestigious music competitions on three continents, has been a regular performer in major music capitals throughout the world, has recorded for radio and television on five continents, and has appeared with leading international orchestras. She is on the faculty of both the Robert Schumann Hochschule in Düsseldorf, Germany, and Kunstuniversität Graz, Austria. Bieler is the creator and director of the Vivaldi Project, a teacher training program in Düsseldorf and at UNCSA, aimed at educating underprivileged youth.

Orenstein has performed in the U.S. and abroad as a chamber musician, soloist and advocate of contemporary music. As a chamber musician, she has appeared in New York's Alice Tully and Merkin concert halls, as well as at the Kennedy Center in Washington, D.C. Orenstein has performed at the Apple Hill Chamber Music Festival in Nelson, New Hampshire; the Green Mountain Chamber Music Festival in Burlington, Vermont; and the International Musicians Seminar at Prussia Cove in Cornwall, England. She joined the UNCSA faculty in 2012, and has taught violin and chamber music at the University of Virginia, UNC-Greensboro (UNC-G) and Wake Forest University.

Whitehouse has performed and taught throughout the United States and abroad, holding artist-in-residence positions at SUNY Stony Brook; the Guild Hall in East Hampton, New York; the University of Virginia; and Tanglewood Music Center. As a soloist, he has appeared with the Boston Pops, the New England Chamber Orchestra, and other orchestras. His recitals throughout the northeastern United States have been broadcast on WQXR's "McGraw-Hill Young Artist Showcase," WNYC's "Around New York," and the Australian and Canadian Broadcasting Corporation networks. Whitehouse is also cellist of the European-based Atma Trio and of the Low and Lower duo with bassist Paul Sharpe. He has recorded for the Centaur, CRI and Innova labels. Before joining the faculty of UNCSA, Whitehouse taught at the University of Florida and UNC-G.

Reynolda is set on 170 acres in Winston-Salem, N.C., and comprises Reynolda House Museum of American Art, Reynolda Gardens and Reynolda Village Shops and Restaurants. The museum presents a renowned art collection in a historic and incomparable setting: the original 1917 interiors of Katharine and R.J. Reynolds’ 34,000-square-foot home. Its collection is a chronology of American art and featured exhibitions are offered in the museum’s Babcock Gallery and house bedrooms. The gardens serve as a 134-acre outdoor horticultural oasis open to the public year-round, complete with colorful formal gardens, nature trails and a greenhouse. In the village, the estate’s historic buildings are now home to a vibrant mix of boutiques, restaurants, shops and services. Plan your visit at reynolda.org and use the mobile app Reynolda Revealed to self-tour the estate.