Students, alumni and faculty of the School of Filmmaking at the University of North Carolina School of the Arts (UNCSA) have numerous connections – from panel discussions to films selected to screen – to the 24th RiverRun International Film Festival, which runs April 21-30.

This year’s festival will be a hybrid of in-person and virtual screenings and panels. Venues include the ACE Exhibition Complex at UNCSA, the Southeastern Center for Contemporary Art (SECCA), Marketplace Cinemas, and theaters at the Milton Rhodes Center for the Arts in Winston-Salem, among others, and the RED Cinemas in Greensboro. Tickets are available on the films and events webpage at riverrunfilm.com. UNCSA is the title sponsor of the festival.

“We are very grateful to have the symbiotic relationship that exists between RiverRun and UNCSA,” said School of Filmmaking Dean Deborah LaVine. “It is beneficial for the festival to have an internationally top-ranked film school in its backyard, and for our young filmmakers to have one of the fastest-growing regional film festivals in the U.S. in the city where they are training.

“I believe festivals remain one of the most significant avenues for filmmakers at every level of their careers to have eyes on their work – which is the primary goal of making films,” LaVine continued. “Also, a film festival enriches its local community both economically and culturally.

I believe festivals remain one of the most significant avenues for filmmakers at every level of their careers to have eyes on their work – which is the primary goal of making films.

“River Run is a gem in that it respects its regional artists but also blends many genres of film, and a wonderful mix of artists who entertain its audience, as well as challenge them,” LaVine concluded.

LaVine will be moderating panel discussions with several of the RiverRun guests. One is with visiting faculty member Ilana Coleman and entrepreneur Iris Cole, who will be panelists for “Filmmaking Approaches To Trafficking and Disappearance” at 3 p.m. Sunday, April 24, in the Main Theatre of the ACE Exhibition Complex at UNCSA. Coleman is a director, writer, editor and producer, working in both documentary and fiction. “The Inventory” is her feature film born out of the murky line demarcating criminal organizations and The State, which is a relationship that’s resulted in more than 80,000 disappearances. Cole's recent venture Do Good Artist is pioneering social change through multi-sector collaborations between the arts and other industries. Do Good Artist launched “Unseen,” a virtual reality experience that raises awareness about human trafficking, at the 2019 RiverRun Festival.

Coleman will also be featured on another panel, “A Woman’s Viewpoint: Mexican and Mexican American Films Today,” which will be presented at 5 p.m. Friday, April 22, at Hanesbrands Theatre at the Rhodes Center. Coleman will be joined by Iliana Sosa, whose documentary, “What We Leave Behind,” is screening at RiverRun, as is Coleman’s narrative, “Dos Estaciones” (detailed later in this release), which premiered at the Sundance Film Festival earlier this year. The panel will discuss how Mexican and Mexican American cinema is currently being transformed by women filmmakers working in both the documentary and narrative sectors of the industry.

A visiting faculty member in directing this semester, Andrew Harrison Brown will be featured on a panel on “Career Sustainability in a Changing Film and Television Landscape,” at 2 p.m. Saturday, April 30, in Reynolds Place Theatre at the Rhodes Center. While many individuals beginning a career in film and television look toward the high-profile, above-the-line careers like directing, writing and acting, there is a myriad of career possibilities in the industry. The advent of streaming and new film and television outlets has seen an expansion of career opportunities in below-the-line careers not even imagined a decade ago. Other panelists include Natalie Bullock Brown, Roger Darnell and Eric Johnson.

All panel discussions are free and open to the public with registration at riverrunfilm.com.

First-year graduate student Aileen Lassiter will represent UNCSA in the 11th Annual Pitch Fest Student Documentary Film Competition at RiverRun. The competition, in which student documentary filmmakers pitch their ideas to a panel of jurors who provide feedback and cash prizes, will be held at 2 p.m. April 23 at Hanesbrands Theatre at the Rhodes Center. She will pitch her doc “What Happened to Ottie B Graham,” about Lassiter’s great-grandmother, who played an active role in the Harlem Renaissance and was educated at Howard and Columbia universities. When her husband, a prominent Black physician, was found hanging in his own office, Ottie left her only son — but why?

Three students have two films in the Films With Class – Elementary School Shorts category, screening at 4:30 p.m. April 28 at Reynolds Place Theater at the Rhodes Center and virtually on April 27.

A student and two alumni have three films in the North Carolina Shorts 2 – Narratives category, which will screen at 7:30 p.m. April 22 at Reynolds Place Theatre in the Rhodes Center and at 8 p.m. April 28 at SECCA, and virtually on April 22. 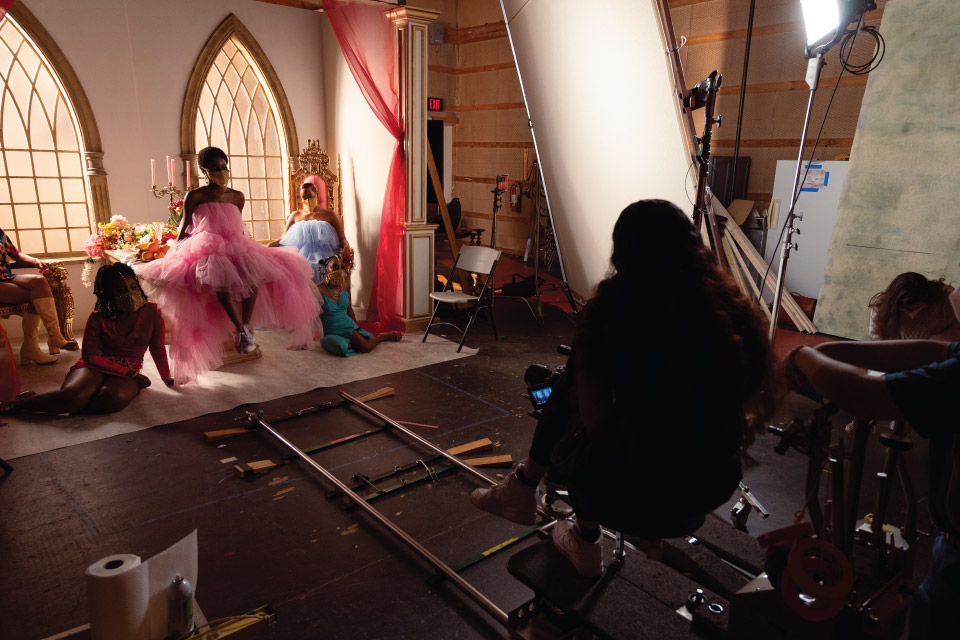 Behind the scenes of 2021 student film "Jazmin."

Alum Grant Conversano (B.F.A. ’18) has a film in the North Carolina Shorts – Documentary category. In “Father, Can’t You See I’m Burning,” Conversano interrogates the medium of the family photo, and what it means to be photographed as a child by one’s father while exploring intergenerational trauma, grief and addiction. The 13-minute film will screen at 3:30 p.m. April 22 at Reynolds Place Theatre at the Rhodes Center and at 5 p.m. April 29 at SECCA. It will also screen virtually on April 23.

Four alumni have three films in the Carolina Stories category.

A School of Filmmaking faculty member and alumna have a film in the N.C. Shorts – Winston Rising category. “Mighty Girls: Rising in Winston-Salem” is a poignant documentary that tells the story of two teenage girls raised in poverty as they pursue their dreams of being an engineer and a police officer in their complicated, sometimes unsafe world. They are helped along the way by their friends at LEAD (Learning Everyday Accomplishing Dreams) Girls of NC. The film is directed by Laura Hart McKinny, John H. McKinny, and alum Ashley Miller (B.F.A. ’20). The 34-minute film will screen at 2 p.m. April 23 at SECCA, and virtually on April 24. Laura Hart McKinny teaches screenwriting at UNCSA. She and son John H. McKinny run a production company called Stone’s Throw Films Inc.

Current School of Filmmaking visiting faculty member Ilana Coleman is the writer/producer of “Dos Estaciones,” which will screen in the Global Currents category. The film portrays iron-willed businesswoman María García (Teresa Sánchez), who is fighting the impending collapse of her once majestic tequila factory in Mexico’s Jalisco highlands. The film will screen at 1 p.m. April 23 in the Main Theatre at UNCSA. This semester, Coleman is teaching directing and screenwriting at UNCSA.

“What’s Up, Doc?” will screen in the From the Archives category at 4:30 p.m. April 24 in the Main Theatre at UNCSA. The hilarious comedy starring Barbra Steisand and Ryan O’Neal is from the late director Peter Bogdanovich, who served several years on the UNCSA School of Filmmaking faculty.

Additionally, this year UNCSA School of Filmmaking students will review select RiverRun films for the Winston-Salem Journal. Support for the film reviews is provided by the Thomas S. Kenan Institute for the Arts.

Directed by Sherene Strausberg (M.M. ’02), “Cool For You” is an animated film, based on the book of the same title, that explains global warming to children in a friendly way. Incorporating different characters and families, animals and plants, the film introduces children to CO2, and positive, easy ways to improve our impact on the earth. A three-minute film, “Cool For You” is in the Films With Class – Elementary School Shorts category, screening at 4:30 p.m. April 28 at Reynolds Place Theater at the Rhodes Center and virtually on April 27.

Directed by Daniel Mercer (M.F.A. Filmmaking ’19) and Matthew Vermilyea (M.F.A. Filmmaking ’19), “The Mourner” focuses on Lonnie Walker, who finds lonely work as a professional mourner at sparsely attended funerals. But when he meets the granddaughter of the recently deceased, he sees an opportunity to set his life on a new path. An 18-minute film made primarily by UNCSA alums, “The Mourner” is in the North Carolina Shorts 2 – Narratives category, which will screen at 7:30 p.m. April 22 at Reynolds Place Theatre in the Rhodes Center and at 8 p.m. April 28 at SECCA, and virtually on April 22.

Directed by Graham Bowlin (B.F.A Filmmaking ’09), “Treats” portrays a married couple – working to overcome a rough patch – that goes out to the desert to focus on each other. When a masked maniac breaks into their home on Halloween night, they’re forced to put aside their differences and come together to defeat him. The 17-minute “Treats” is in the Late Night Shorts category, which screens at 12 a.m. April 28, virtually only.