When guitarist Harry Conn walks across the stage to receive his undergraduate diploma from UNCSA, it will mark the completion of a journey that, as he puts it, has composed a third of his life. He came to the United States from his home country of Vietnam at age 15, and joined the high school guitar studio in the School of Music his junior year.

Since then, UNCSA has become like a second home. After completing the high school program, he stayed for his undergraduate studies — during which time he has made connections across campus as a Resident Assistant (R.A.) and as a member of the ArtistCorps program, among his other work.

Conn was also a recipient of multiple scholarships, including the Aaron and Lorraine Shearer Scholarship for Guitar and the Bill and Judy Watson Scholarship. In 2021, he won the School of Music's annual concerto competition, playing Concerto de Aranjuez” by Joaquín Rodrigo, which he went on to perform with the UNCSA Symphony Orchestra in the current season.

As he completes his journey at UNCSA and heads to Yale for graduate studies, Conn reflects on his time studying with guitar professor Joseph Pecoraro, his love of the instrument and composing, and on the power of creating connection in the community.

What do you love about playing the guitar, and what made you choose to study it?

The guitar is something I discovered serendipitously. I went to have a few lessons when I was 8, just to try it out. The teacher told my parents that I was very fluent with the guitar, that it came very naturally. It wasn't something I really thought about, it was like brushing my teeth. And my parents encouraged me to follow this path.

There was a teacher from North Park University, Julie Goldberg, who came to have a master class at my school. She also taught An Tran, an acclaimed Vietnamese classical guitarist, who is an inspiration to me. She was one of the first people to ask me how I felt about a passage I was playing. It totally bamboozled me because I didn't know what to say — and I'm supposed to know what to say. Music is about expression, about the language of emotions, but I didn't know what I was feeling. That put me into a really contemplative mindset, and that's what inspired me to come to the United States.

What influenced your decision to attend UNCSA for high school and continue for your undergraduate studies?

I came to the U.S. at age 15 to study guitar, and started UNCSA in my junior year of high school. It was a huge honor to study abroad in the United States. What I cared about most was the teacher. 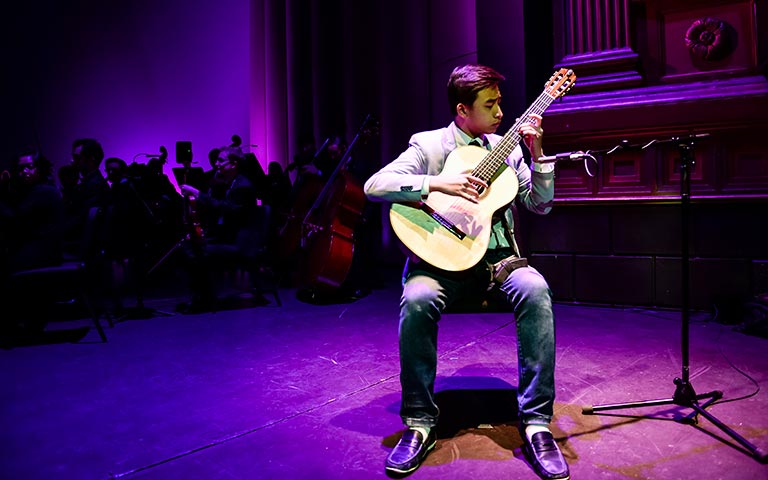 Joseph Pecoraro is one of the greatest, if not the greatest, teachers of guitar. He's so dedicated, and almost scientific about the way he teaches. He's very detailed, very procedural and he always has an explanation for everything that he does. That gave me a totally new perspective in my education, it pushed me and gave me a pathway that I could see clearly and follow.

I stayed for college mostly because of Joe. I felt I couldn't possibly learn enough from him.

Can you tell us about some of the work you've done outside of music during your time at UNCSA?

I found out about the R.A. job from a friend. It's one of the few jobs I can do as an international student. I knew nothing about being an R.A., but they saw something in me and hired me. It has been a great experience because it pushes me. I go out and program all of these events and get to work as a team with other R.A.s. The first year was really beautiful because everyone was really passionate about their job and the school. It felt more like a family than work.

It's also great because there are all kinds of people from different schools on campus, so there's a lot of collaboration — that's a hidden benefit. I have received a lot of opportunities from being an R.A. For example, I played guitar for the Drama Cabaret earlier this year because one of my friends in the R.A. program is a Drama student. 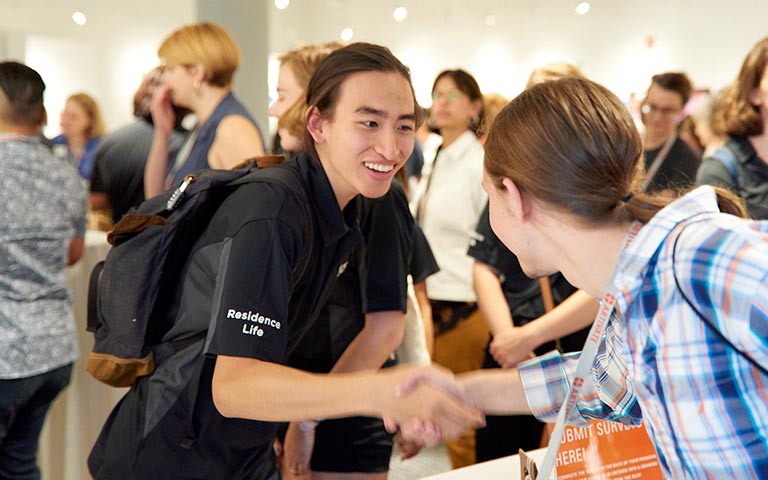 I also found out about ArtistCorps through friends. In my third year I was studying pedagogy with Joe Pecoraro and became a certified Suzuki teacher. I learned a lot about teaching young children and I thought ArtistCorps was the perfect opportunity to use my teaching and pedagogy skills and put them to the test.

This year, I also worked with Easton Elementary School teaching the Wolf Method [a pre-phonics arts integration and instruction program]. That was very educational and eye-opening to me. Those interactions taught me a lot.

Tell us about your senior recital and the inspiration for the pieces you selected:

For my recital I was very, very ambitious. I really wanted to push the guitar and push myself. In the real world, I wouldn't put that much music into one program, especially for solo guitar. I had music from the Baroque period, NeoClassical period, jazz, the modern era and three pieces that I wrote myself. It was an amalgamation of all of the music that I've played that I wanted to express on the guitar and try out.

My pieces are inspired by my Vietnamese heritage and by composers like Roland Dyens and Andrew York, who are very modern. Their harmonies come mostly from jazz and folk songs from different countries. That's the biggest thing I want to do with the rest of my career: write music.

I also played a really fun, unique piece from Yale alumnus Thomas Flippin. As part of the application process for graduate school at Yale, they send applicants a completely new commissioned piece. It was fun heading into the piece knowing nothing about it (they removed all markings) and knowing that there's nothing wrong with my way of playing it. It's similar to composing in that there's a lot of freedom there.

What do you feel you've learned, artistically and personally, during your time at UNCSA?

UNCSA is my home. I've spent a third of my life here, and that time of my life was a time of growth. It has been a huge journey of learning about relationships: with my friends, with my teacher, with the guitar. The experience of being an artist among so many other artists is amazing.

The scariest thing about being an international student is getting out of your comfort zone. What helps at UNCSA is that it's such a small community that everyone knows almost everyone else. That makes it easier to get out and connect with other people.

I remind myself every day to be myself and to be original. Explore whatever it is you're trying to say, and find a way to voice that. That's the most important thing I've learned about being an artist at UNCSA.

The biggest thing I've learned is to try and be original, to try to be myself, even if I know it's quite hard. There are so many people judging you — critics, friends, yourself. I remind myself every day to be myself and to be original.

Explore whatever it is you're trying to say, and find a way to voice that. That's the most important thing I've learned about being an artist at UNCSA.