Misty Copeland, a principal dancer with American Ballet Theatre and the first Black woman to be promoted to the position in the company’s 75-year history, spoke to an audience of more than 300 dance students and community members in Watson Hall on Friday. She is well-known as an advocate for diversity and access in ballet.

Appearing at the invitation of Dean Endalyn T. Outlaw of the School of Dance, Copeland spoke in conversation with Dean Outlaw about her life, career and influences as well as issues of equity, diversity, inclusion and belonging (EDIB) in ballet. She highlighted notable Black dancers from throughout history who have been overlooked, several of whom are highlighted in her New York Times-bestselling book “Black Ballerinas,” an illustrated nonfiction collection celebrating dancers of color who have influenced her on and off the stage. 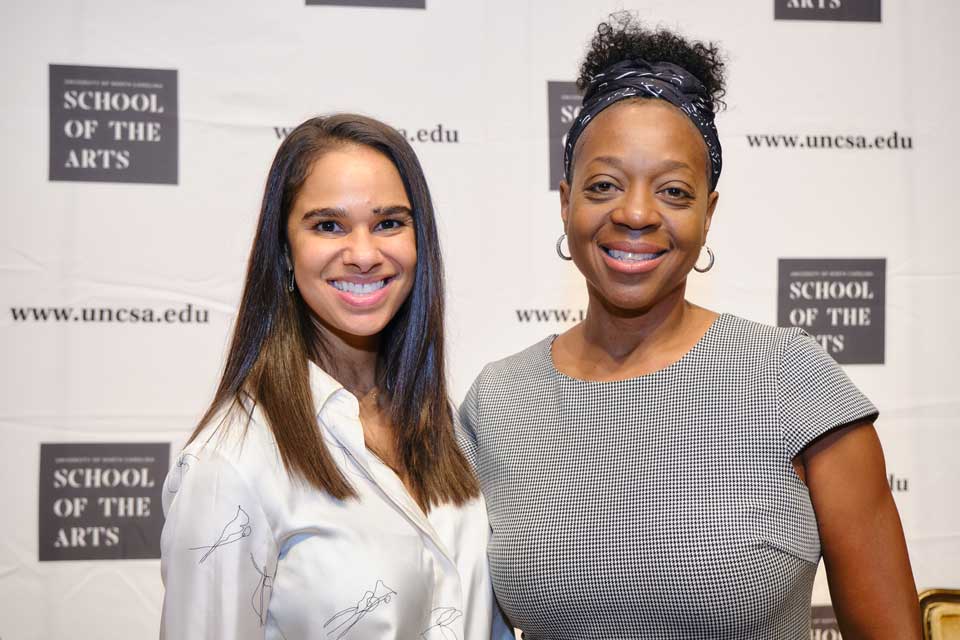 Copeland also discussed her recently announced initiative, “Be Bold,” a free after-school dance program that aims to make ballet accessible, affordable and fun, especially for children of color, and the importance of creating opportunities for underrepresented groups in dance.

The audience included students from UNCSA, the Arts Based School, Empower Dance Studio, Royal Expressions and other regional schools and studios. 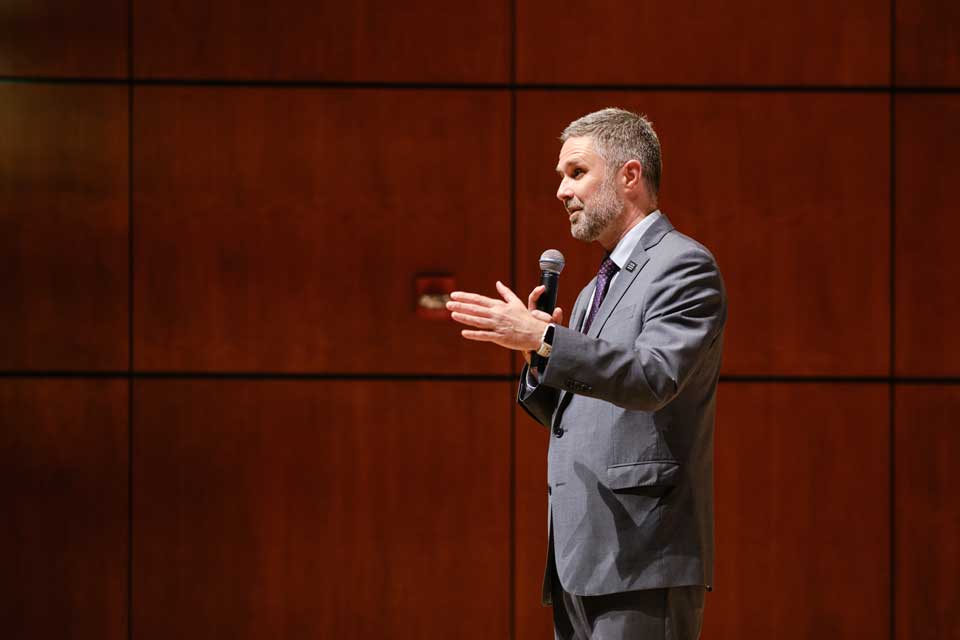 Chancellor Brian Cole introduced Copeland, calling her “an inspiration.” He said, “It is an honor and a privilege to welcome this truly transformative dancer, author and advocate, to share her insights and experience with our students and community.”

Dean Outlaw lauded Copeland for her work to “celebrate and elevate” Black ballerinas from throughout history. She commented: “It is always a welcome opportunity to have prominent industry folk on campus to interact with our students. They bring a direct perspective to the past and current culture of the field. They are living, breathing testimonies to the ability to influence through the arts.

Bringing someone of Misty’s stature, someone who has become a household name to people who know little else about ballet is incredible," Outlaw continued. "The fact that she is a person of color, with a less-than-privileged journey to becoming the person, artist, author, entrepreneur and activist she is today, is an immense opportunity to inspire others with similar circumstances. Putting her face-to-face with our students and young students from the community allows them to see themselves in the future, mirroring the work Misty has done to uplift the art form, diversify the field, and give back.

The timing of Misty’s visit is quite opportune and aligns with my priorities for the future of the School of Dance at UNCSA. One of my core visions as dean is to diversify, unify and thusly strengthen our program from within in order to impact the areas in dance that are slowly changing, albeit resistant to artistic and cultural shifts. Providing exceptional training, performance and learning opportunities for the entirety of students will require making space for new voices, and representation at the front of and around the studio,” Outlaw concluded.

Copeland described to the audience that when she was a young dancer, she lacked access to resources to learn about Black dancers. It was meeting Stephanie Dabney — who performed as a principal dancer with Dance Theatre of Harlem from 1979 through 1994 and was best known for her performances in John Taras' “The Firebird” — that opened her eyes to an overlooked history. “Stephanie brought so much to my life," Copeland said. "To be able to see someone who has literally walked in your shoes and shared so many similar experiences, and this iconic role of the Firebird. She made a huge contribution to the art form.” Dean Outlaw held a moment of silence for Dabney, who passed away on Sept. 28. 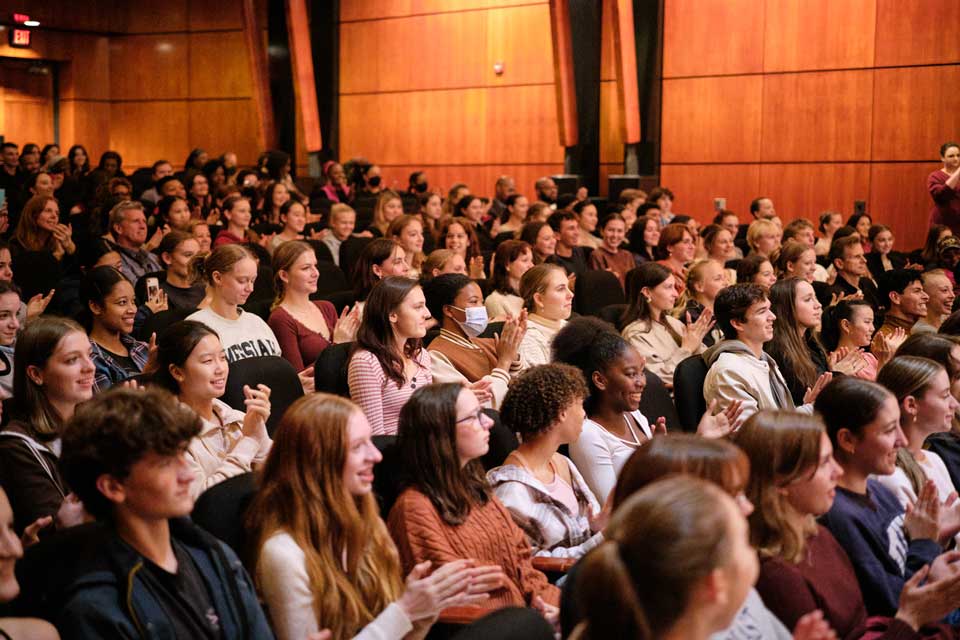 “Black Ballerinas” is Copeland’s seventh book. “I wanted to create something I feel doesn’t exist. To have in one place a book you can open and see Black dancers with all different body sizes and ranges of success,” she said. “My main goal is to show there are varying ways to have success in this art form.”

Among other notable Black dancers Copeland mentioned who were a significant influence on her included Raven Wilkinson, who became the first African American woman to dance for a major classical ballet company when she signed a contract to dance full time with the Ballet Russe de Monte Carlo in 1955. Copeland recalled learning about Wilkinson through a documentary on PBS, remarking that it “changed my purpose.

“Just seeing that image of her I felt like I belonged. That I do have a history as an African American woman in this art form,” said Copeland, who befriended Wilkinson (who, coincidentally, lived a block from her at the time). “It gave me a second wind. I wouldn’t be a principal dancer now if not for her.”

Copeland’s next book, “The Wind at My Back: Resilience, Grace, and Other Gifts from My Mentor, Raven Wilkinson” (to be released in November) tells the story of their friendship, and how they changed each other, and the dance world.

Copeland described how sharing the stories and legacies of Black and brown people in dance who haven’t been acknowledged is her purpose as a performer. “I began to realize that I can use this stage and platform and voice to connect with and share these stories,” she said. “This has been my life story of connecting with other Black women in this field. All of them deserve to be acknowledged and celebrated.”

Of her new after-school “Be Bold” initiative, Copeland said she wants to give students who may not otherwise have had the opportunity to access affordable dance instruction. The classes, which will be offered in local Boys & Girls clubs and other similar community-based, child-serving sites, are “fun and rigorous” and give students “more of a voice. That is the way I want these communities to see ballet,” Copeland said. The program will have a diverse group of teaching artists because “it is vitally important for these kids to see their background is being embraced.” She noted that a free after-school dance class through the Boys & Girls Clubs was her first introduction to dance, and where her talent was discovered. “It changed my life,” she said. 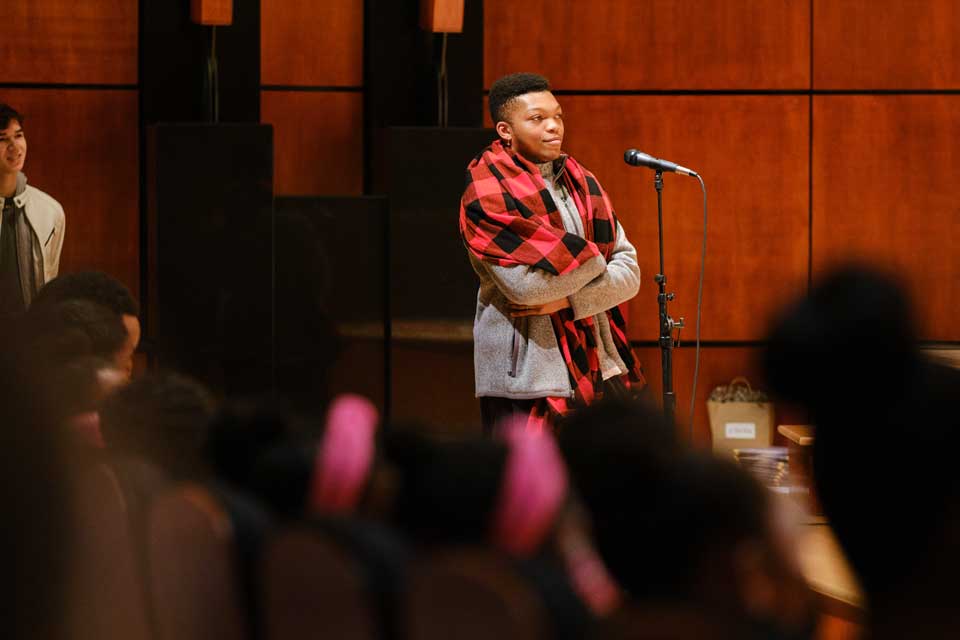 During a Q&A session following the talk, first-year UNCSA Dance student Leander Gray asked Copeland how she feels about the future of inclusivity in dance. She responded that she is “hopeful for the future of dance for dancers of color. There has been the most impact I’ve ever seen these last few years. It is so empowering that young people have a voice in a way I’ve never seen. As dancers we feel we can’t have a voice because we express ourselves through our bodies; I’m excited about this generation: that you speak up and are activists, changing the world in positive way.”

When asked what is her favorite part of being a dancer, Copeland said, “There has always been something about going on stage that makes me feel protected, like I could fully express myself. Not being able to see the audience, with it all dark and black out there, I could just be me. That’s my safe space.

“Dance has always been the language that suited me best,” she continued. “When I was young, dance became a thing I needed, that made me feel safe during a difficult time in life. It was a constant and provided stability. For me it was not just about having fun. It saved my life.”

Misty Copeland was also the keynote speaker at the Winston-Salem Dance Medicine Conference on Sept. 30, provided by the Northwest Area Health Education Center (AHEC), a program of Wake Forest University School of Medicine and a part of the NC AHEC System, with Atrium Health Wake Forest Baptist. 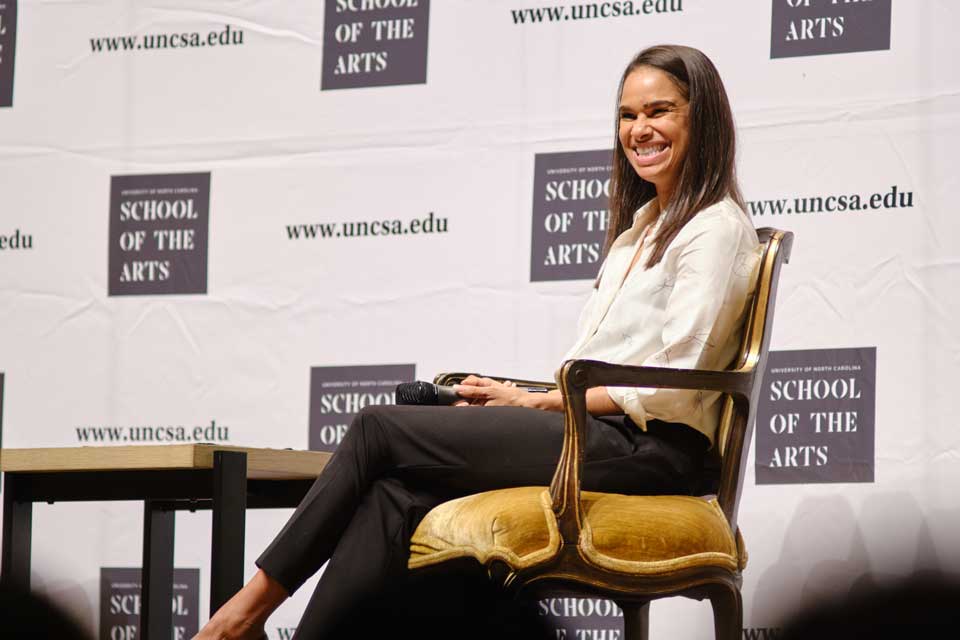 Misty Copeland is a principal dancer with American Ballet Theatre, the first Black woman to be promoted to the position in the company's 75-year history in 2015. She has performed some of the most iconic classical ballet roles, including Odette/Odile in “Swan Lake”; Juliet in “Romeo & Juliet”; Giselle; Manon; Coppelia; Kitri in “Don Quixote”; and Firebird, to name a few.

Copeland has been featured in several publications, including the cover of Time Magazine for the Time 100, as well as the covers of ESSENCE, Self, ELLE South Africa, Oxygen and Women’s Health. She has also appeared on CBS' “60 Minutes,” “CBS Sunday Morning,” ABC's “Good Morning America,” NBC's “The Today Show” and “Little Big Shots,” celebrating extraordinary young people.

She made her first awards season guest performances in 2019 with Taylor Swift at the American Music Awards and at the 2020 Grammy Awards alongside Camilla Cabella, Common, Ben Platt, and dancers from the Debbie Allen Dance Academy, as well as the televised Prince Grammy Tribute performing with award-winning recording artist H.E.R. Copeland made her Broadway debut in “On The Town” in 2015 and her major motion picture debut in Disney's “The Nutcracker and the Four Realms” in 2018.

Copeland started her production company, Life In Motion Productions, and is working on her first project, “Flower,” a silent arts activism film using dance to help raise awareness about homelessness. She is also featured in an episode of “Masterclass,” the online series.

Copeland is an avid philanthropist and is an ambassador of the Boys & Girls Clubs of America, of which she is also an alum, and MindLeaps, an arts education program based in Rwanda that helps young people get off the streets and into an academic setting to help enhance their lives. She is The New York Times bestselling author of “Life In Motion,” “Ballerina Body,” “Black Ballerinas,” and a picture book titled “Bunheads.” She is also author of the award-winning children's picture book, “Firebird.” Her newest book, “The Wind At My Back,” a tribute to her late mentor and friend, pioneering ballerina Raven Wilkinson, publishes November 2022.

In 2021, Copeland received the Spingarn Medal, the NAACP’s highest honor.