“The Nutcracker,” presented by Mercedes-Benz of Winston-Salem, live at the Stevens Center Dec. 9-18

UNCSA proudly welcomes Mercedes-Benz of Winston-Salem as the 2022 sponsor for the beloved annual holiday tradition of “The Nutcracker” ballet presented live at the Stevens Center in downtown Winston-Salem this holiday season, featuring 90 dancers from the School of Dance, the UNCSA Symphony Orchestra performing Tchaikovsky’s timeless score conducted by guest artist Jiannan Cheng, and Dance faculty member Ilya Kozadayev’s expanded choreography highlighted by the return of favorite characters and scenes in the full-length ballet audiences will remember.

“The Nutcracker” opens Friday, Dec. 9, and runs for 11 performances through Dec. 18. Tickets begin at $25 and can be purchased at uncsa.edu/nutcracker or by calling the box office at 336-721-1945. Proceeds from “The Nutcracker” support student scholarships.

“With the return of the complete score, a fully realized Party Scene and everyone’s favorite matriarch – Mother Ginger – this year’s production promises to fill your hearts with joy and your eyes with visions of sugarplums dancing in your head,” said School of Dance Dean Endalyn T. Outlaw. “I speak for myself and our experienced faculty in expressing how fortunate we are to nurture and contribute to the development of these talented, gifted students,” she continued. “We are encouraged by your smiles, laughter and appreciation of the performers as they pour their heart and souls into leaving it all on the stage.” 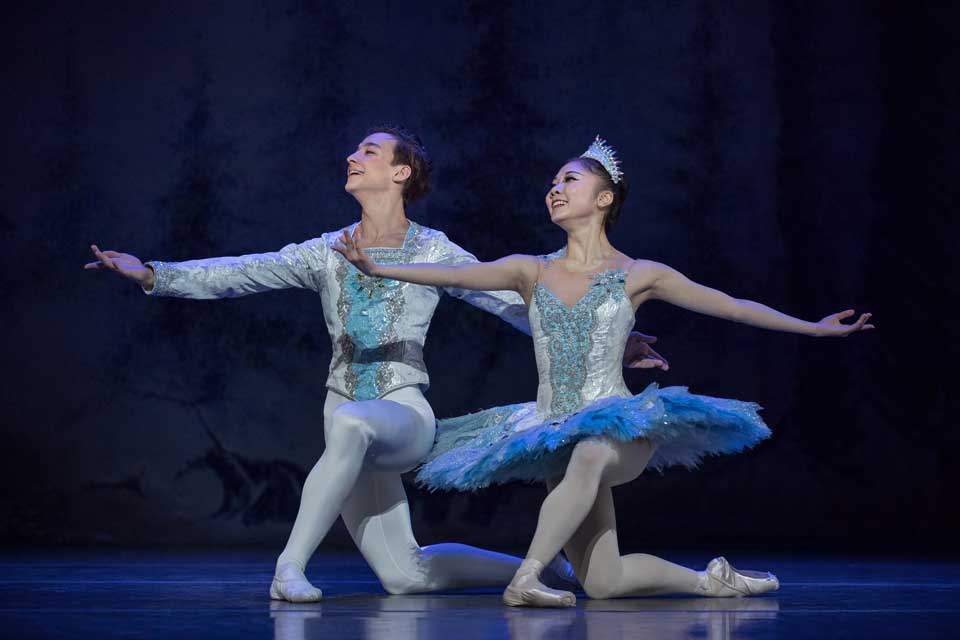 Students and faculty from the UNCSA schools of Dance, Design & Production (D&P) and Music work together to produce “The Nutcracker,” an annual tradition since 1966. This year’s production features the return of Mother Ginger, played by UNCSA ballet faculty member Keith Thomas, and the complete vibrant opening Party Scene. It will feature more dancers than ever before, giving every ballet student in the School of Dance the chance to appear in the cherished holiday production, in addition to students from the contemporary dance program. 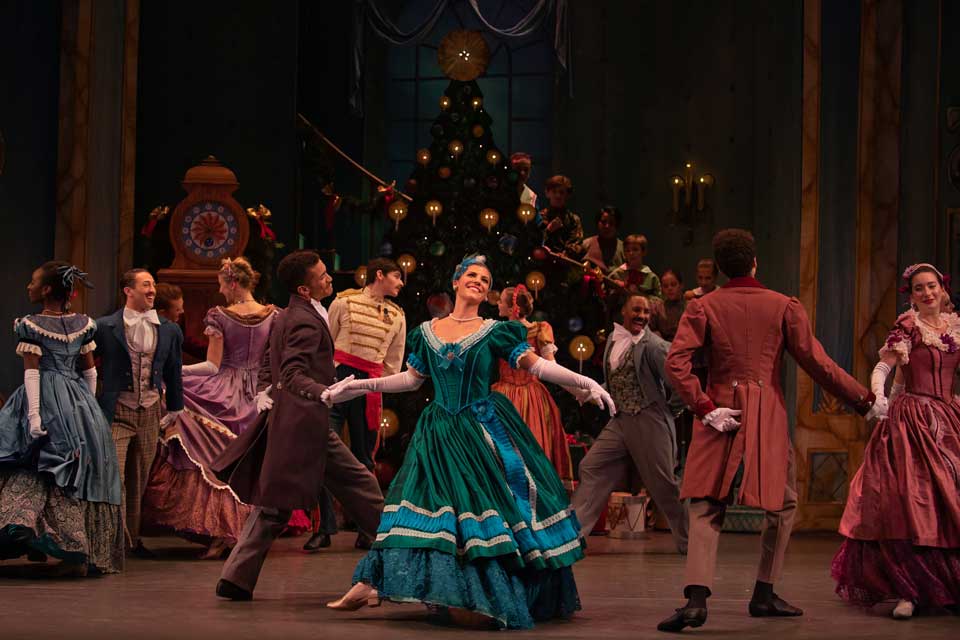 New this year, attendees will experience “The First Nutcracker: An exhibit of costumes and scenes designed by Christina Giannini” at the Stevens Center, featuring original designs from the first presentation of “The Nutcracker” in 1965. Christina Giannini was the school's first resident costumer and niece of Vittorio Giannini, the founder and first president of the school (1964-66). Additionally, UNCSA graduate Design & Production students from the animatronics program will design a Nutcracker-themed window display in the Stevens Center. UNCSA will also hold a food drive to fight food insecurity in Forsyth County in partnership with the Salvation Army for the duration of the show.

History of “The Nutcracker” at UNCSA 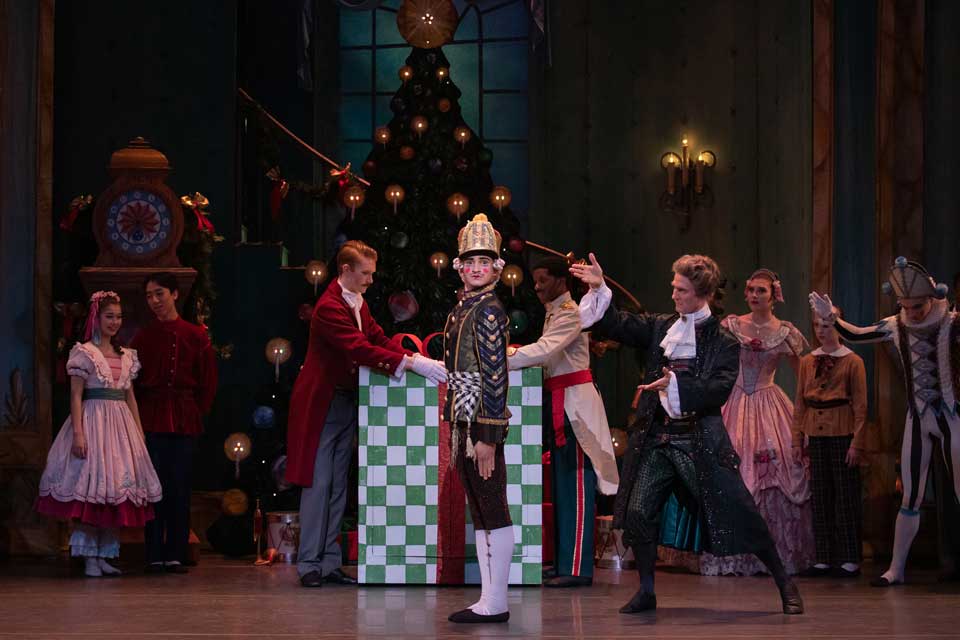 “The Nutcracker” has been performed annually by students under the direction of faculty and staff since 1966. That year, Robert Lindgren, founding dean of the UNCSA School of Dance, and his wife, Sonja Tyven, a School of Dance faculty member, staged “The Nutcracker” at UNCSA for the first time as part of the town of Salem’s 200th anniversary celebration. The choreography was modeled after what Lev Ivanov and Marius Petipa created for the original production in 1892. The costumes were uniquely UNCSA, envisioned by the schools then-resident designer, Christina Giannini. Performed for the first time on Dec. 10, 1966, in Reynolds Auditorium, the UNCSA “Nutcracker” production has been reimagined, recreated and refreshed numerous times since.

The First Nutcracker: An exhibit of costumes, and scenes designed by Christina Giannini 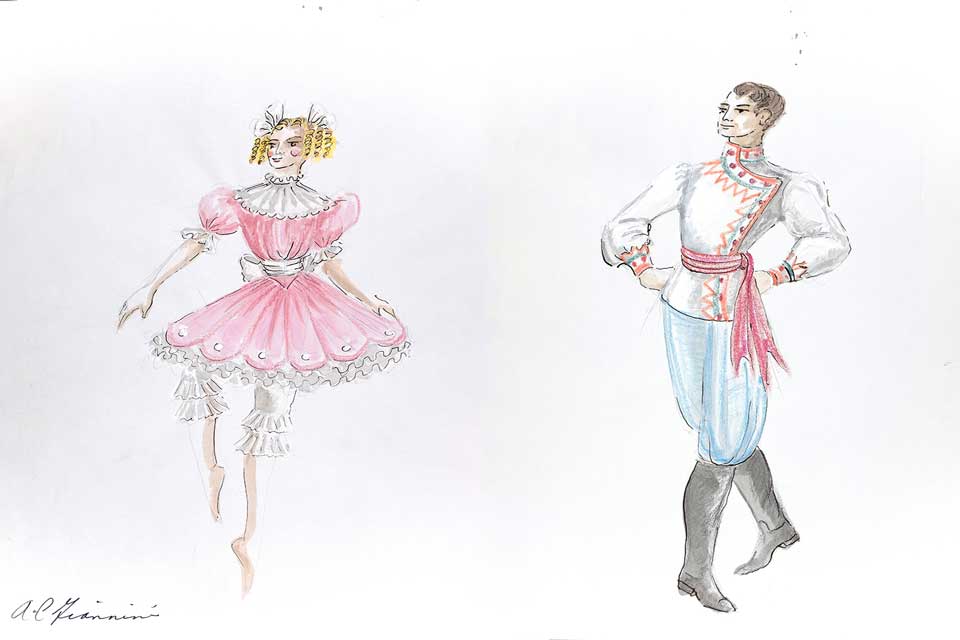 For the first time in the show’s history, patrons will have the chance to view an exhibit of costumes and scenes designed by Christina Giannini for the first UNCSA “Nutcracker” performance in 1966. The display will include sections of Giannini’s original show design drawings that are part of the Christina Giannini Collection of Design Drawings in the UNCSA Archives.

“We’re excited to give folks a peek into the history of the School of the Arts Nutcracker as imagined by Christina Giannini who has such an impact on the legacy of the campus,” said University Archivist and organizer Kait Dorsky. “She designed for numerous productions here and helped establish a reputation for excellence in costume and scene design for the university as a whole.”

In 1965, when the North Carolina School of the Arts first opened, Christina “Stia” Giannini was invited by her uncle, Vittorio Giannini, to serve as the schools first resident costumer. During her time at the school, she taught courses in costume design and created costumes and scenery for numerous dance, drama and opera productions.

Families wishing to attend the performance can take advantage of the Super Saver Family 4-Pack deal. The affordable package deal is available for the evening performances on Wednesday, Dec. 14, and Thursday, Dec. 15, only. The package includes two adult and two child tickets at $5 off each. To purchase the Family 4-pack deal head to the event page for more information.

The UNCSA Staff Council and the Salvation Army of Winston-Salem are hosting a campuswide and community food drive to help fight food insecurity for Forsyth County residents. A donation drop-off location will be available at the Stevens Center beginning Dec. 8 and throughout the run of The Nutcracker. To find out which items are needed, you can visit our website.