A rare collaboration among the Schools of Drama, Music, and Design and Production has given UNCSA students a powerful sense of achievement and advantages in their future professional careers.

The idea of enhancing Peter Shaffer’s “Amadeus” with a musical score came to School of Drama faculty member and director Quin Gordon seven years ago after doing something similar with “Good” by C.P. Taylor. After clearing it with Dean of Drama Scott Zigler, Gordon approached Mark Norman in the School of Music with his idea for “Amadeus,” and the two began working together. 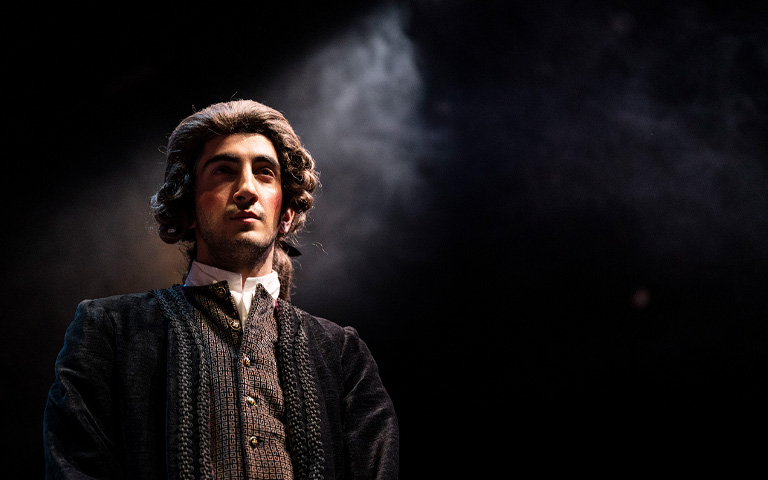 Editor’s Note: The film version of Amadeus is listed as one of “10 films every special effects makeup artist should see” by Director of Wig and Makeup Holland Berson.

Incorporating the Music of Mozart

“Quin and I met last summer and started talking about what music we would play,” Norman says. “We tailored the excerpts to the script. I would call Steve LaCosse and say, ‘Where is this section in the opera?’ And, of course, he would know right where to find it.” LaCosse is the artistic director of the UNCSA Fletcher Opera Institute.

Karen Mason, a third-year Music student from Asheville, played Katerina Cavalleri, a student of Salieri’s who becomes enamored with Mozart and his music. Because of her experience singing at the Lyric Opera Studio Weimer and Berlin Opera Academy in Germany, she was able to help her fellow actors with pronunciation and cultural context for some of the dialogue.

I am most proud of the soundtrack creation. It was truly collaborative and creative.

“I just hope that people take away from this that indulging in classical music doesn’t have to be a serious or intimidating thing,” Mason says. “People look for something to touch them emotionally, so why not go to classical music where it all began?”

“I am most proud of the soundtrack creation,” Norman says. “It was truly collaborative and creative. When you see this play done by any other theater, you won’t hear this soundtrack.”

The final score stitched together 67 excerpts from Mozart’s masterworks, many of them selected by the students. “There was a moment when Quin wanted the music to end strangely, and the students had great suggestions for that,” says Norman.

The result was an emotionally affecting production about the fictional rivalry between composers Wolfgang Amadeus Mozart and Antonio Salieri.

Designing the 18th century for today

The show opened with 20 musicians onstage in the dress of Mozart’s time: knee breeches, frock coats, white stockings, and powdered wigs, all created by students in the Design and Production Costume and Wig and Makeup programs. Music director and conductor Norman also dressed the part. 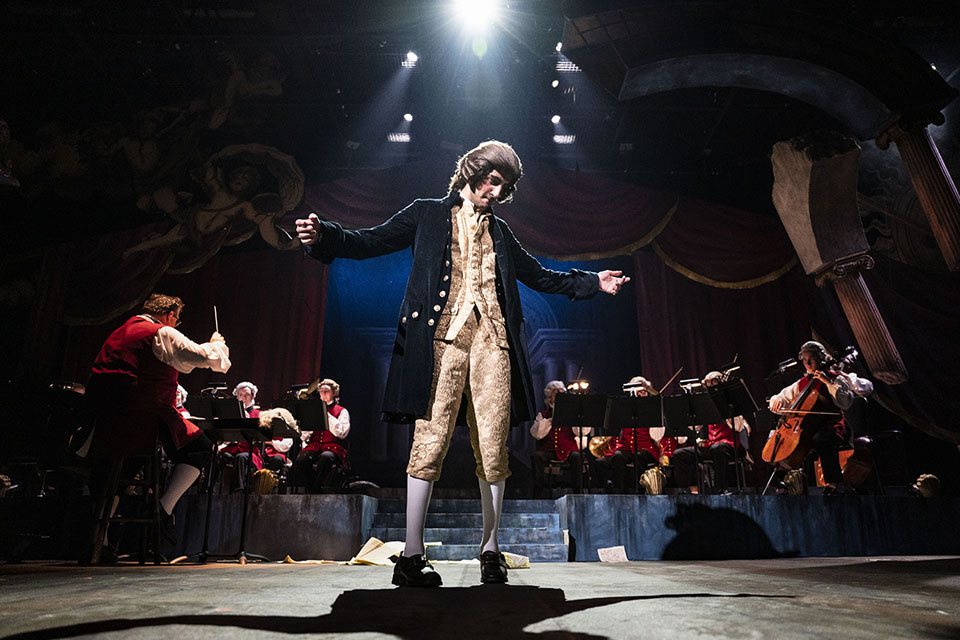 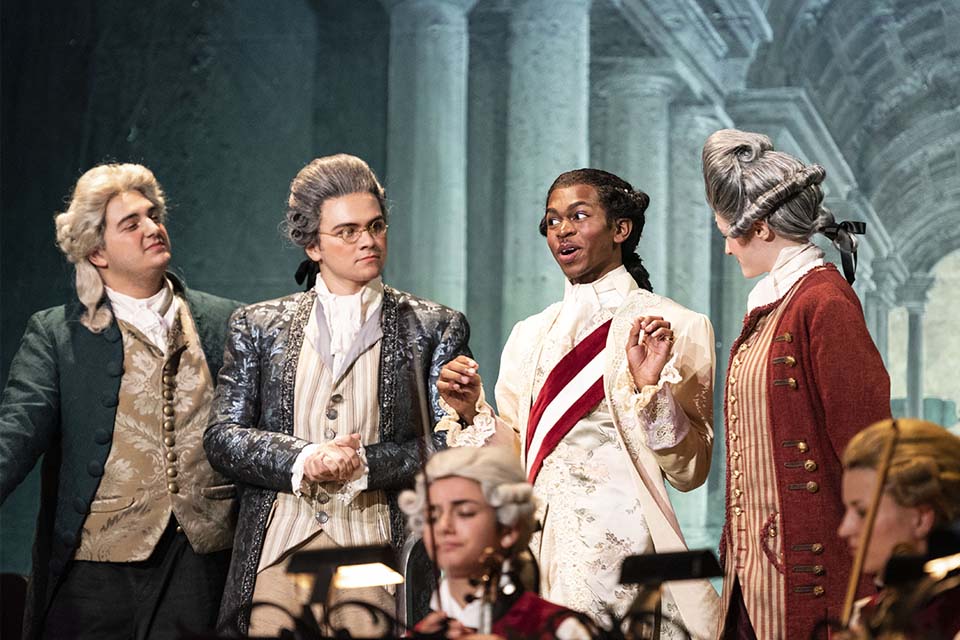 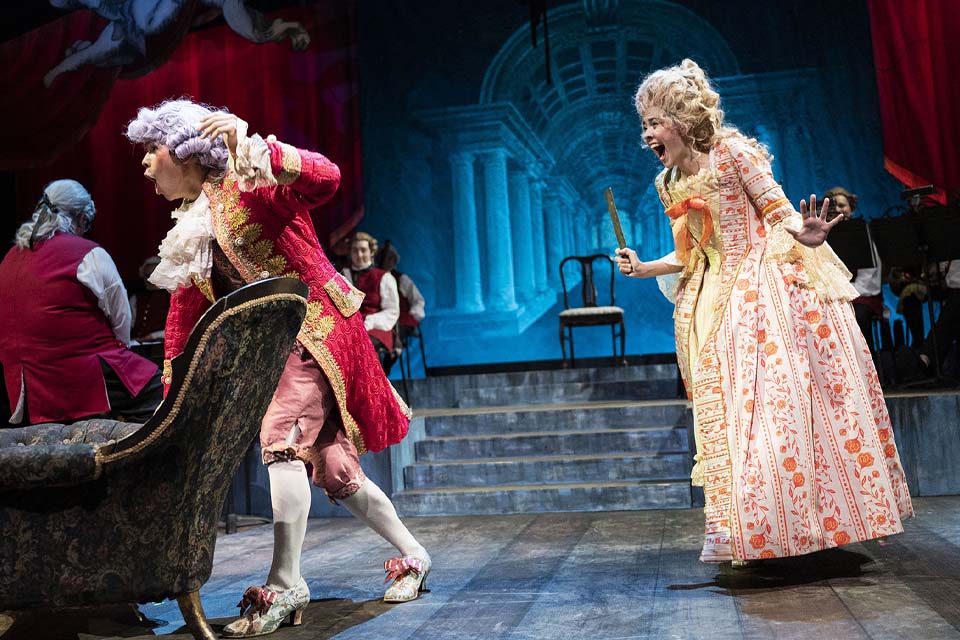 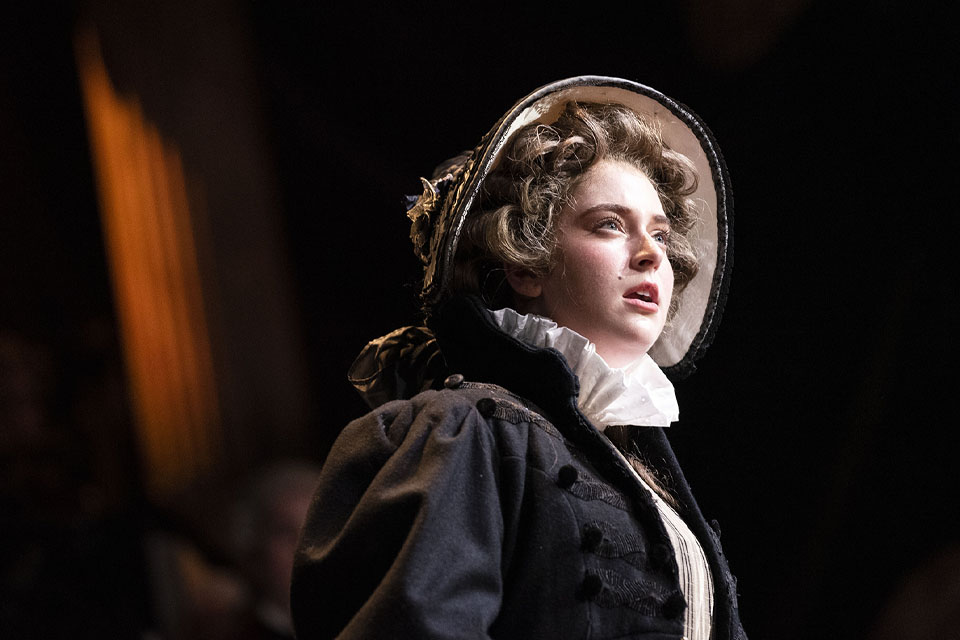 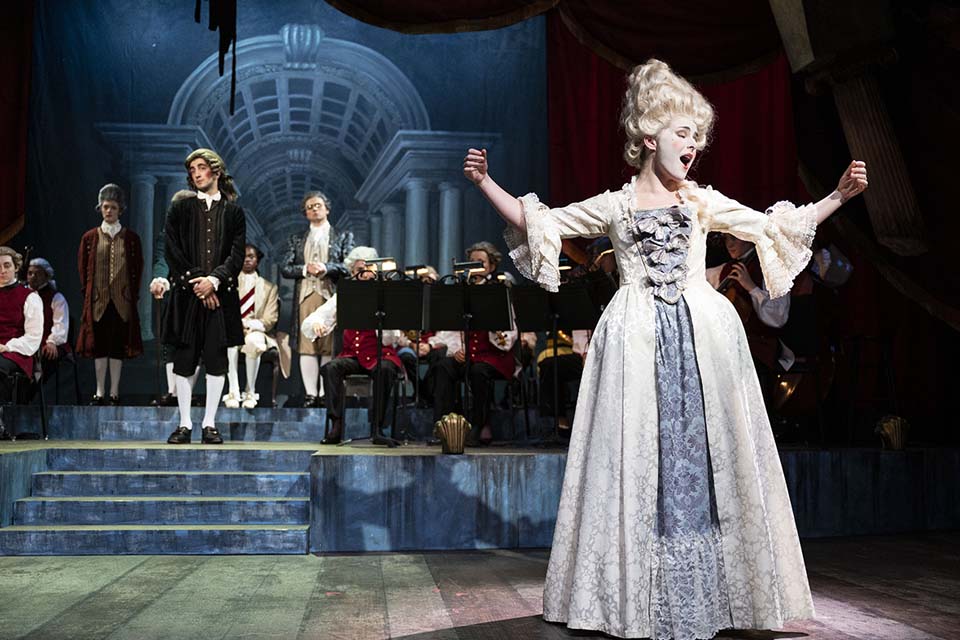 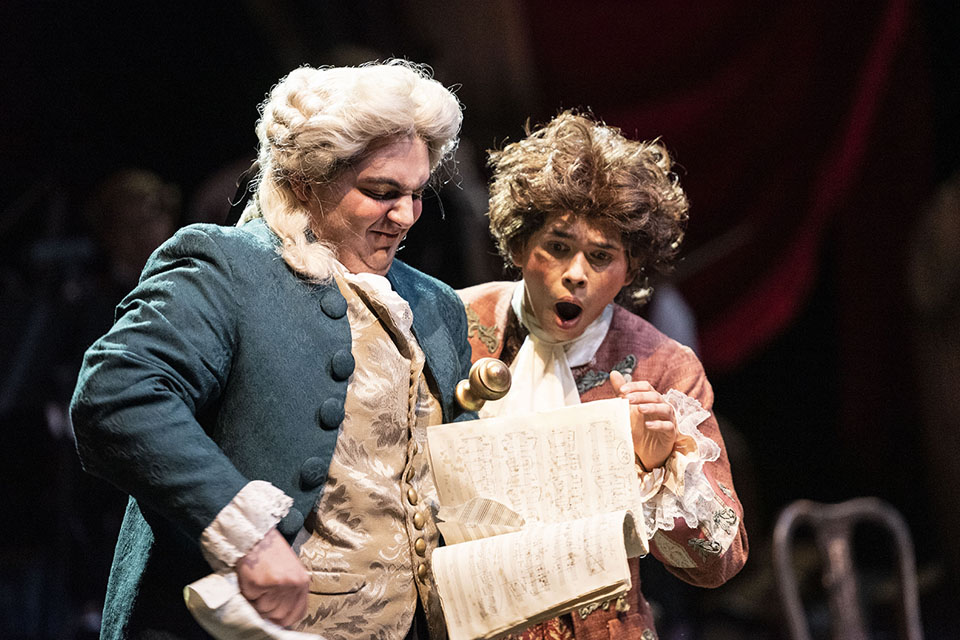 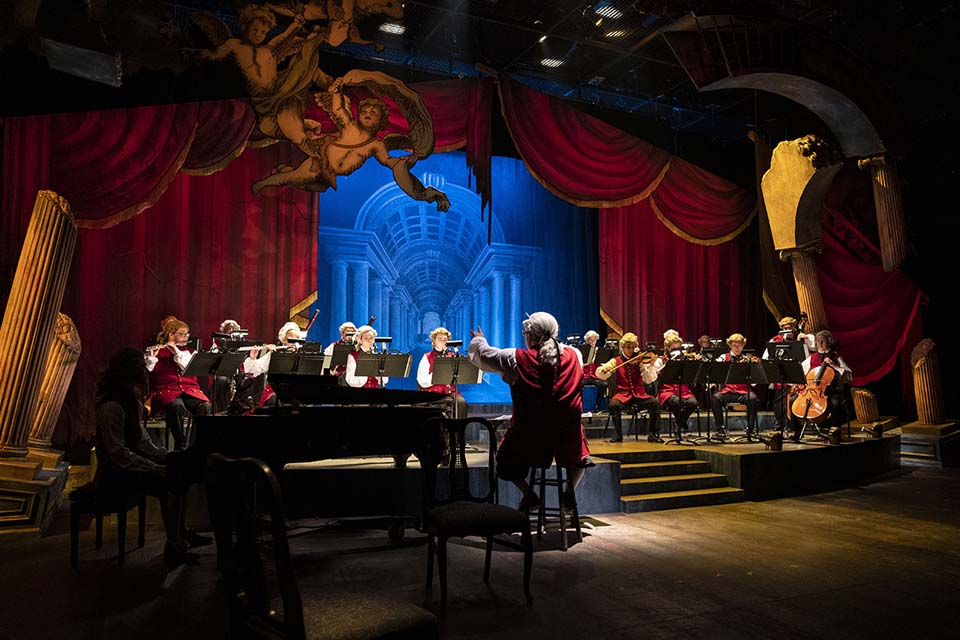 Overhead hung set pieces that reflected the beauty of the 18th century while simultaneously hinting at its destruction. Cherubs floated alongside broken decorative pillars and an elaborately appointed archway.

“The set came out of our first production meeting,” Gordon says. “We had to get 20 musicians and 10 actors on stage, and Nathan did it.”

In the story, Mozart’s music and talents enrapture Salieri. Still, he is dismayed that such gifts reside in such a vulgar young man. Mozart’s remaining letters show his fascination with scatological humor. A former child prodigy, his inability to conform to polite society, coupled with the poisoning power of rumor and gossip, enabled Salieri to slowly but surely destroy Mozart’s career, according to the play.

“The playwright doesn’t put Mozart at the center of the play. Instead, he puts Salieri, the composer who has been all but forgotten, at the center,” Gordon says. “The story has always appealed to me. I saw the movie when I was nine and it’s something I’ve always wanted to do.

“It was fast and furious, and every night it got smoother. I’m really proud of the actors and how much depth they got from the characters. I prefer to be the editor of the best ideas in the room instead of imposing my ideas on the students.” 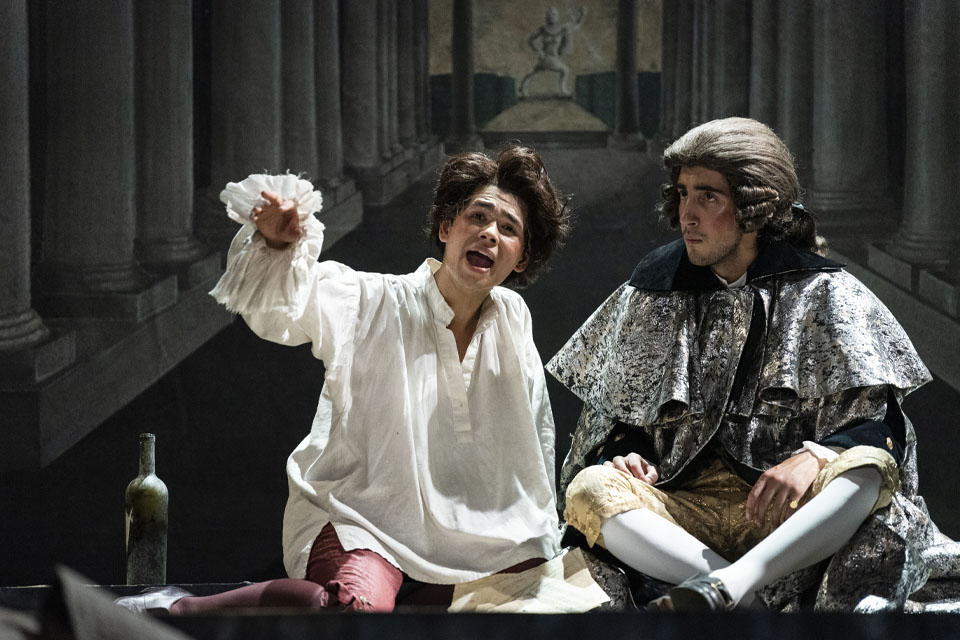 Trevyn Wong (left), as Mozart, and Arman Hakimattar (right), as Salieri. in the UNCSA production of "Amadeus" by Peter Shaffer. / Photo: Allison Isley

Two students who worked hard throughout the show and made it look easy were Trevyn Wong, as Mozart, and Arman Hakimattar, as Salieri.

Hakimattar, a fourth-year student from Calgary, Alberta, Canada, describes the play as “a jungle gym for acting.”

“The scenes slam into one another and the point of view changes on a dime,” he says. “There’s no room to center yourself because there are three and a half hours to throw yourself into the moment, which requires total commitment.

“Trevyn and I had comparable feelings,” shares Hakimattar. “So much of the play is resting in our hands. It was the hardest show we have ever had to do, but we could lean on each other. The ensemble was great too. It was really a wonderful process.”

Wong, a fourth-year student from San Luis Obispo, Calif., says, “The most challenging things were also the most fun things. I was super-drawn to doing research.”

Gordon adds, “We spent a lot of time talking about child stars and early fame – Michael Jackson, Britney Spears, Miley Cyrus. All the early adulation stunted Mozart, and his obsession with sex and scatological humor trapped him.”

Mozart wrote his first symphony at five, and his father took him all over Europe to perform in all the royal courts.

Among other things, Wong read “Mozart’s Letters, Mozart’s Life” by Robert Spaethling. “It was super informative for me to learn about him through the way he wrote. Everything he wrote was super-frenetic. He didn’t bother much with spelling but wrote in the rhythms and cadences.”

Another book he read was “I’m Glad My Mom Died” by former child star Jennette McCurdy. “I was trying to understand how the author feels about her mom,” he says. “And I believe it’s the way Mozart felt about his dad.”

“For child stars, navigating the world is challenging when society praises you for being one way as a child but derides you when you keep being that way as an adult.”

The most challenging things were also the most fun things.

In the play, Mozart is baffled by the strictures of the grown-up world. At one point, he says, “I’m just a good fellow. Why do they all disapprove of me?”

In the role of Amadeus, Wong is onstage much of the time, and when he’s off stage, he is changing costumes. “Especially in the second act, there’s not a moment when I’m not running around in the backstage circle,” Wong says. “Forty-seven seconds is the longest time I had to make a change. All the Design and Production people were great with everything happening backstage.”

“Endurance in so many different ways is what I learned from this process,” Wong says. “What’s it like to be a physical actor in any performance? How can you sustain your voice and your body? For me, all of it was a lesson in endurance and committing fully with what I have.”

When music and drama unite

The actors and the musicians rehearsed separately, learning their parts until just two weeks before the show. Then they combined their considerable talents.

Violinist Roni Shitrit, a fourth-year student from Israel, performed as the concertmaster. “Amadeus” was the first time she had worked with actors or with sets and costumes.

“Today, as musicians, we really need to know how to work with everyone,” she says. "Being exposed to these varied ways of doing music and shows is important." 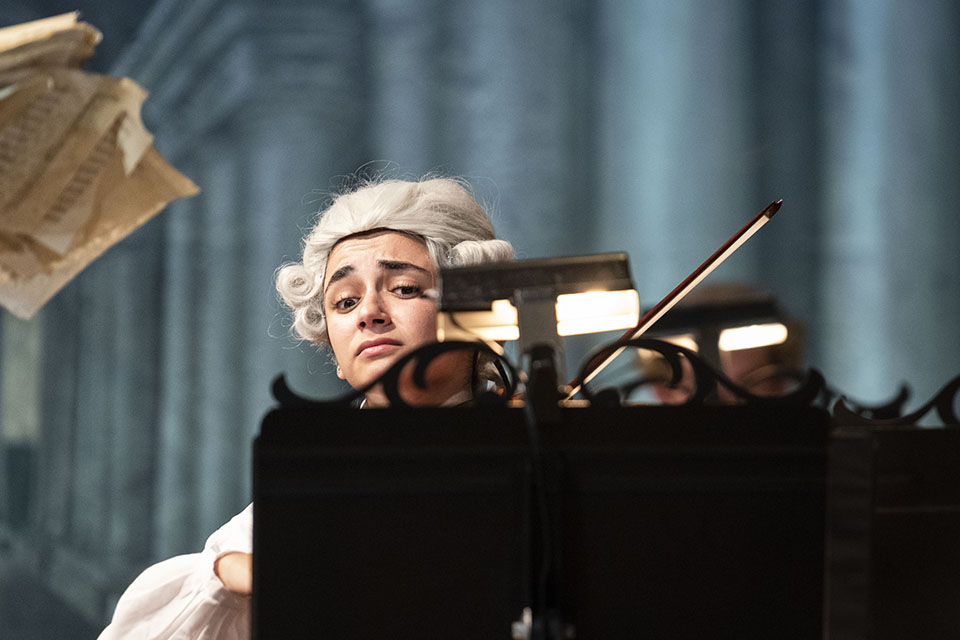 Violinist Roni Shitrit, a fourth-year student from Israel, performed as the concertmaster for the UNCSA production of "Amadeus." / Photo: Allison Isley

“It was definitely different from playing in a concert setting. Instead of playing it like I would in a concert hall, I played it based on the scene. I’m very emotional as a player, and I move a lot. It was nice to know that people looked at us and saw us as a part of the show.”

In the Prelude music before Act I began, the conversation in the theater gradually softened as Sophie Lyman, a third-year cellist, performed a gorgeous rendition of the Bach Cello Suite No. 1 in G Major.

“It was exciting,” she says. “It was cool to see it all come together. And it was Mozart, so it was cool to play the music, and adding it into the context of the lines really improved my understanding of who Mozart was.”

Hakimattar had been working on Salieri’s dialogue for weeks, but his job changed when the musicians came on board.

“I had been so long in the rehearsal process finding the colors and nuances of the dialogue, then when the orchestra came in, my job became very clear,” he says.

Wong says that one of the moments in the play that struck him was when Mozart talked about what music can do. “There’s one part where he quarrels with the Baron, the Chamberlain, and Salieri, and he says: ‘It would take a poet pages and pages to have this argument, but the composer can write a quartet and make it all happen at once.’”

In the marriage of words and music, in the hands of talented actors and musicians, magic sometimes strikes.