Nia Imani Franklin, a University of North Carolina School of the Arts (UNCSA) alumna and native of Winston-Salem, is Miss America 2019. Franklin, who competed as Miss New York, was crowned last night in Atlantic City, N.J.

Franklin received a master’s degree in composition from the School of Music in 2017, and was awarded a Kenan Fellowship at Lincoln Center Education in New York.

For her talent selection she performed a selection from the opera “La Boheme.” 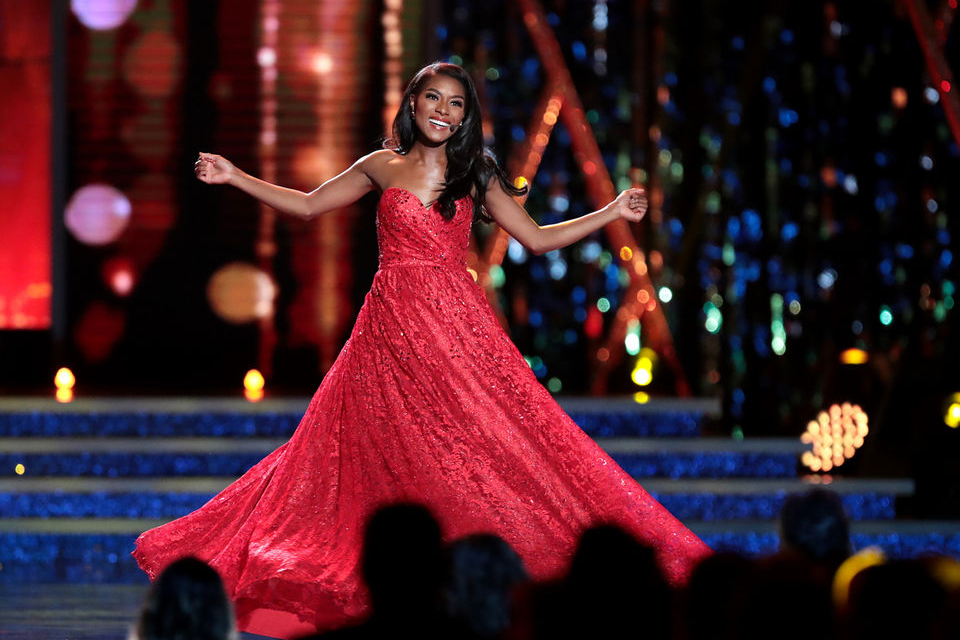 Nia Franklin, Miss America 2019, performed a selection from the opera “La Boheme” for the talent portion of the competition.

Chancellor Lindsay Bierman said Franklin has been a terrific ambassador for UNCSA, and will likely be one for the Miss America organization. “Nia is a remarkable young woman who embodies the power of the arts to enrich and transform lives,” he said. “As everyone saw from her performance last night, she is very talented. We’re proud of her and can’t wait to see what she will accomplish during her reign as Miss America and in the years to come,” Bierman added.

Nia is a remarkable young woman who embodies the power of the arts to enrich and transform lives.

The 92nd Miss America, Franklin was crowned as the event rebranded itself from a pageant to a competition dubbed “Miss America 2.0” during a year of reorganization and the elimination of the iconic swimsuit competition. But Franklin said the crown and the competition will come out stronger.

“I really believe in this organization and I have for a long time,” she said after being crowned, adding the scholarship money has been valuable, but “it was also about the leadership, the mentorship and the sisterhood that you find in this program.

“If we continue to focus on those positives, that will keep this organization up and running,” she added. “That’s what’s going to help us see another 100 years.”

Franklin credits her experience at UNCSA with fueling her passion for arts education, which is her social impact initiative in the pageant organization. While pursuing her Master of Music, she was a member of ArtistCorps, an artist-driven AmeriCorps service program that places accomplished artists in public schools and community-based institutions to work with high-needs students.

In an interview after the competition, Franklin related a story from her ArtistCorps experience. “I was going into different sites teaching music in schools and preschools that didn’t have it,” she said, adding that she met a two-year-old named Noah who had limited vocabulary, a very short attention span, and no ability to focus.

Franklin said exposure to music turned Noah’s life around, increasing his vocabulary from about 20 words to 100 during the year. “It was in that year that I knew I really have to go farther with my love for music,” she said.

I grew up with a love for music.

After she was crowned, Franklin said at a press conference that her participation in the Miss America program allowed her to pay for her education as an undergraduate at East Carolina University, where she received a degree in vocal performance. During her freshman year of college, Franklin’s father was diagnosed with non-Hodgkin’s Lymphoma, a form of cancer. She used her love and passion for music to find therapeutic ways to help herself and her family through the hardship. As a last resort, she donated stem cells and essentially saved his life.

“It took a lot of perseverance to get here," Franklin said after her win. "I want to thank my beautiful family, my mom and my dad, who is a survivor of cancer."

Franklin composed her first song at the age of 5, called “Love, Love, Love, Love, Love.” She said she always wanted to compose music and chose to study as an opera singer because she lacked formal training playing an instrument. “I grew up with a love for music,” she said. “I took all the arts classes, all the music classes.”

At least seven UNCSA students and alumnae have previously competed for the Miss America crown, representing North Carolina, Georgia, Pennsylvania and the District of Columbia.