Stage Properties student lives the dream behind the scenes

Maine State Music Theatre (MSMT) was the perfect setting for senior Stage Properties student Morgan Ochs to build her skills and better herself as an artisan through its journeyperson program this summer. The theatre presents several Broadway-quality musicals every summer at the Pickard Theatre in Brunswick, Maine. For theatre students it also offers educational fellowships in the form of an apprenticeship or journeyperson. This season, Ochs worked on “Grease,” “Guys and Dolls” and “Newsies,” to name a few.

What does a stage properties person do?

I spent most of my time on the shop floor creating and repairing props. My projects ranged in carpentry, painting, upholstery and crafting. Being able to work in the Prop Shop meant that every day I was able to do something different, from building lockers for “Grease” to going fabric shopping for “Guys and Dolls” or loading in a show to the theatre. No two days were ever the same.

Another exciting opportunity I had was to be the properties master of one of the concert shows, “The Taffetas.” This meant I was solely in charge of handling all props for the show. It was a lot of fun to work on. We made a custom On Air sign, and I created a fake line of beauty products, which was my first time doing a Photoshop project independently.

Which was your favorite show you worked on? 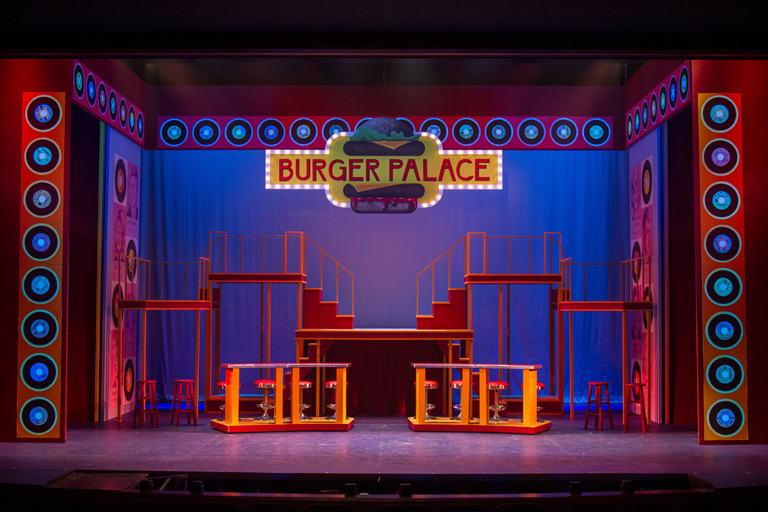 UNCSA produced “Guys and Dolls” in 2015. Any comparisons?

When I was a freshman I had the opportunity to work on “Guys and Dolls” in the Scene Shop. I got to help with the build process, and then run the show backstage. I remember being in awe of how beautiful everything was: the set, the costumes, the props. I wished I had a bigger impact on the show. The neat thing about MSMT’s version was that there were things in the show that I had ownership of: building and painting the mission benches, lettering the Bible verses on the signs. I had much more of a personal connection with the show this time around. Being able to watch the show and see the completed piece and remembering how it started, or all the time that went into it, is such an incredible feeling. 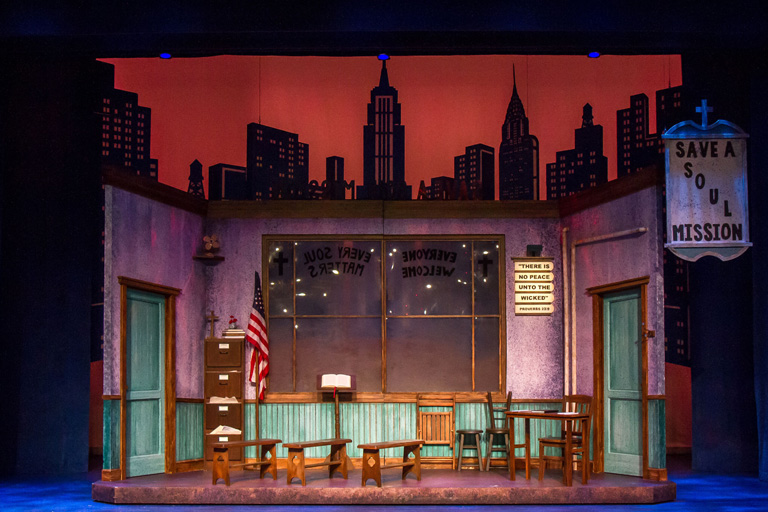 How did you find out about this opportunity?

My closest friend and fellow UNCSA student Andy Canning-Skinner was applying to MSMT and I decided to as well. I really liked the season they were doing and thought that working in Maine would be nice. It worked out great because we both ended up there! There were a lot of other current UNCSA students who worked for MSMT this summer in the paint shop and as stage hands. The costume designer for “Guys and Dolls” is a UNCSA graduate.

What did you learn from this experience?

Working at Maine State Music Theatre made me realize that often I doubt my abilities. I’m essentially my biggest critic, which can be positive sometimes, but also very negative. I would say before working here this summer I was nervous. I felt that I wasn’t at the level a rising senior should be at, that I was behind or lacking; however, working here showed me that I’m capable of so much more then I knew. UNCSA has taught me so much in the past three years, things that I didn’t even know I would remember or would be relevant, and yet all those little moments of triumph and failure and growing really helped me become the person I am today. I’m thankful for all my teachers that made me the individual I am.

UNCSA has taught me so much in the past three years, things that I didn't even know I would remember or would be relevant, and yet all those little moments of triumph and failure and growing really helped me become the person I am today.

How was it to work with practicing artists?

My two department heads really changed the way I thought about props as a whole. Elizabeth Frino (the properties master) has a fine eye for detail, and always made sure that we did our best work. She challenged me to push myself and work on different projects that I wasn’t used to doing, which made me a more confident artisan. Corinne Gologursky (the properties assistant) also greatly contributed to my success. She was always willing to take time to teach me how to do something correctly, and believed that I was always capable of doing a good job. I’m extremely thankful to have worked alongside such strong and powerful women.

Describe your summer in one word.

Invigorating. Being able to work alongside such talented people really made me want to better myself as an artisan, and continue to grow and learn every day. It was challenging, but MSMT really made me love what I do even more.