The University of North Carolina School of the Arts is mourning the loss of Bruno Louchouarn, an associate professor of interdisciplinary studies in the Division of Liberal Arts. He died today in Winston-Salem at the age of 59 following a courageous battle with esophageal cancer.

A cognitive scientist and award-winning composer whose music has been performed internationally, Louchouarn joined the UNCSA faculty in 2014. He was also a research designer for the Center for Design Innovation, and taught courses in the School of Filmmaking and the School of Design and Production. 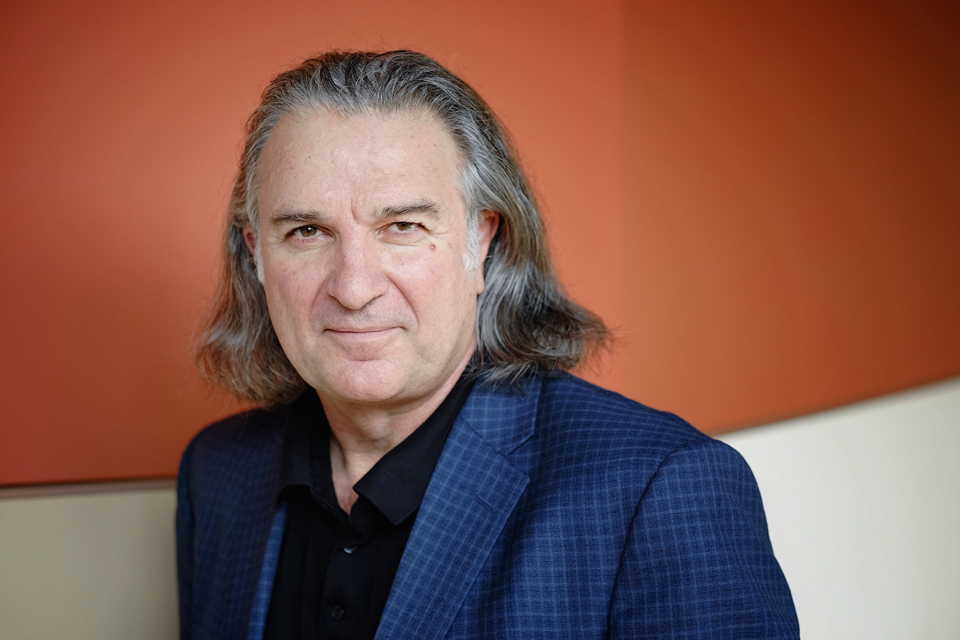 As a teacher, Louchouarn translated complex theory into practice for his students, said Provost David English. “His experiential, collaborative style of teaching was a perfect fit for our conservatory setting, and his classes were among our most sought-after electives,” English said. “He will be missed by many.”

Louchouarn was married to UNCSA alumna Corey Madden, executive director of the Thomas S. Kenan Institute for the Arts. The couple were frequent collaborators, including their recent “And So We Walked,” a one-woman play, directed by Madden with sound design by Louchouarn. It premiered in April 2017 at HanesBrands Theatre in Winston-Salem, presented by Triad Stage. A production in Portland, Ore. this spring garnered national attention.

Louchouarn’s musical legacy is vast, innovative and diverse. He leaves a catalog of more than 600 original musical compositions including orchestral and chamber music; opera, dance, film, television and theater scores; and numerous sound and media installations. His remarkable body of work reflects his wide-ranging interests in music, media and sound, and is informed by his academic research in cognitive science, artificial intelligence and ethnomusicology. His musical catalog also reflects the spirit and rhythms of Paris, Mexico City, Los Angeles and the Piedmont of North Carolina, the places he called home over six decades.

Since coming to UNCSA, Louchouarn collaborated twice with Dean of Dance Susan Jaffe, composing music for “Carmina Terra,” which premiered at Spring Dance in April 2018 and for “Metallurgy,” which premiered at Winter Dance in February 2015 and later was performed at the Alvin Ailey Theater in New York City.

“My collaborations with Bruno made me a better choreographer and a better person,” Jaffe said. “He was so nimble, open and ready for anything as a composer, he made me more open in my work.

“He had so many great ideas,” she continued. “He would hear my ideas, and together we would create new ideas for our work. I will really miss working with him. He is a great friend.”

My collaborations with Bruno made me a better choreographer and a better person. He was so nimble, open and ready for anything as a composer, he made me more open in my work.

He composed the score for “Wrestling Jerusalem,” a one-man play adapted into film in 2016, which screened at numerous film festivals across the country and was hailed by critics as “a tour de force” and a “work of art.”

He collaborated with Herbert Siguenza, founder of the Latino comedy troupe Culture Clash, on Siguenza’s one-man play “A Weekend With Pablo Picasso,” at Alley Theatre in Houston and Los Angeles Theater Center, among other venues. Siguenza recently posted on Facebook that Louchouarn was “my greatest artistic collaborator besides the (Culture Clash) boys.”

As a sound designer, Louchouarn was nominated for a Los Angeles Drama Critics Circle Award in 2016 for “Mojada: A Medea in Los Angeles,” Luis Alfaro’s breathtaking adaptation of Euripides’ ancient Greek tragedy set amidst the immigrant community in East Los Angeles. It was presented in 2015 by The Theatre @ Boston Court and Lawrence Fleischman Theater at the Getty Villa.

Louchouarn’s “Sol Path” (directed by Madden), an immersive music and media work, was commissioned for the A X S 2014 festival in Pasadena, Calif. “Sol Path” was developed through a residency at NASA’s Jet Propulsion Laboratory during which Louchouarn met with Mars Mission team members including rover drivers, robotics engineers and members of the “planetary protection team” and collected interviews, images and data that he incorporated into the score and media installation.

Louchouarn was born Paris, France. As a teenager, he moved with his family to Mexico City. In 1977 he attended Université Pierre et Marie Curie in Paris, where he studied for five years, obtaining a B.S. in computer science, followed by an M.S. and a Diplôme d’études approfondies in artificial intelligence.

Louchouarn returned to Mexico in 1982 as a university teaching fellow, and in 1985 was called up to serve in the rescue efforts following the devastating Mexico City earthquake. His experiences on a multinational team working to rescue infants from the Hospital Juárez de México inspired his opera, “Voces en el Polvo (Voices in the Dust)” with a libretto by Juan Felipe Herrera, poet-laureate of the United States.

Louchouarn earned a Ph.D. and a Master of Arts in music composition from the University of California Los Angeles.

He served as director of the Keck Language and Cultural Studio and associate professor of digital media at Occidental College in Los Angeles.

In addition to his wife, he is survived by his mother, Henriette Nelly Louchouarn; his brother, Patrick; his son, Erwan; and his stepsons Nicholas Rawitsch and Ezra Rawitsch.

A memorial celebrating his life and music will be held at 3 p.m. on Friday, Sept. 21 in Watson Hall at UNCSA. A subsequent memorial will be held in Los Angeles.

In lieu of flowers, the family requests that donations be made to a fund established in his honor at UNCSA. The Bruno Louchouarn and Corey Madden Fund will support interdisciplinary projects at the University and the presentation, performance and preservation of Bruno’s musical catalog. Contributions can be made online or mailed to: UNCSA Foundation, Inc., 1533 South Main St., Winston-Salem, NC 27127.