Shakespeare’s play about a battle that took place in 1415 provides rich content for students at UNCSA as they explore a storytelling genre made popular nearly a century ago, all the while developing skills they’ll likely use in the new normal of post-pandemic arts and entertainment. “Henry V” will be presented by the School of Drama and the School of Design & Production as a modern-day radio play. It premieres at 7:30 p.m. Thursday, Nov. 12, and will be available on demand thereafter (run time approximately two-and-a-half hours, in two acts).

Drama faculty member Sara Becker directs Shakespeare’s most famous war play – about England’s victory over France at the Battle of Agincourt, performed by third- and fourth-year actors. A team of graduate and undergraduate students in the School of Design & Production’s sound design program provides an original soundtrack with leadership of faculty members Jason Romney and Lindsay Jones, a 2020 Tony nominated composer and sound designer.

Becker, who specializes in Shakespeare, voice and dialects, said the play is about “a kid – a screwup – going to bars and being irresponsible and reckless, and then his father dies and he is forced to take over the family business. And that business is leadership.”

In her fourth professional experience with “Henry V,” Becker said the leadership theme appealed to her at this moment in America’s history. “We watch Henry grow up and become an inclusive leader for all of England. He is able to unite the country to say ‘We are England.’ It’s a really powerful message right now.”

Becker previously was voice and text coach for “Henry V” productions with Oregon Shakespeare Festival, the Guthrie Theater/The Acting Company and Classical Theater Company of Houston. This is her first time directing it. “Every time I come back to this play it hits me in a new way. That’s the thing about classics – they can be a real mirror for what is happening now,” she said.

“Henry V” also explores citizen participation through the role of Chorus, a narrator who appeals to the audience to become involved with the story. “We don’t have everything we need,” Becker paraphrases Shakespeare’s text. “We need you to participate. We need you to imagine.”

Jones, who has designed sound and composed music for Broadway shows, film and television, said “Henry V” is a natural choice for a radio play, and a radio play was a natural choice for UNCSA during the pandemic. “With such a boldly theatrical story such as ‘Henry V,’ our students continue an amazing tradition of actually creating theater for an audience,” he said. “I love podcasts as much as the next person, but sometimes they seem to come from an objective and distanced perspective that allows a listener to choose how much they become absorbed by the experience.

“With an established and dramatic play like ‘Henry V,’ our students must not only embrace the fact that they are creating a theatrical environment, but they must continue the tradition of immersing an audience so completely into a story that they suspend their disbelief and sit on the edge of their seats in the listening experience,” Jones added.

With an established and dramatic play like 'Henry V,' our students must not only embrace the fact that they are creating a theatrical environment, but they must continue the tradition of immersing an audience so completely into a story that they suspend their disbelief and sit on the edge of their seats in the listening experience.

Radio plays became popular during World War II (1939-45), when nine out of 10 families owned radios and listened in for up to four hours a day, tuning in to hear President Franklin D. Roosevelt's fireside chats; regular series like "The Roy Rogers Show" and "Abbott and Costello"; and plays that were often adapted from classic theater works.

While radio’s popularity faded with the advent of television in the 1950s and ’60s, radio drama has never entirely gone away. The BBC still regularly produces and airs radio plays, and NPR has had a number of radio play series, including Earplay and NPR Playhouse, which ran from the 1980s until 2002. Most recently, podcasts have become enormously popular, and in the age of social distancing during the pandemic, radio plays are allowing theater companies to continue presenting work for audiences while venues remain dark.

Romney, director of the sound design department, said making a radio play in 2020 is a very different process than it was in the 1930s and ’40s. Traditionally, radio dramas were recorded live, with the entire cast and sound effects crew gathered together in a studio, performing the piece for listeners in real time. "Our actors were never in the same room at any time," he said. "We gave them all recording devices and they recorded themselves individually while together on a Zoom call." 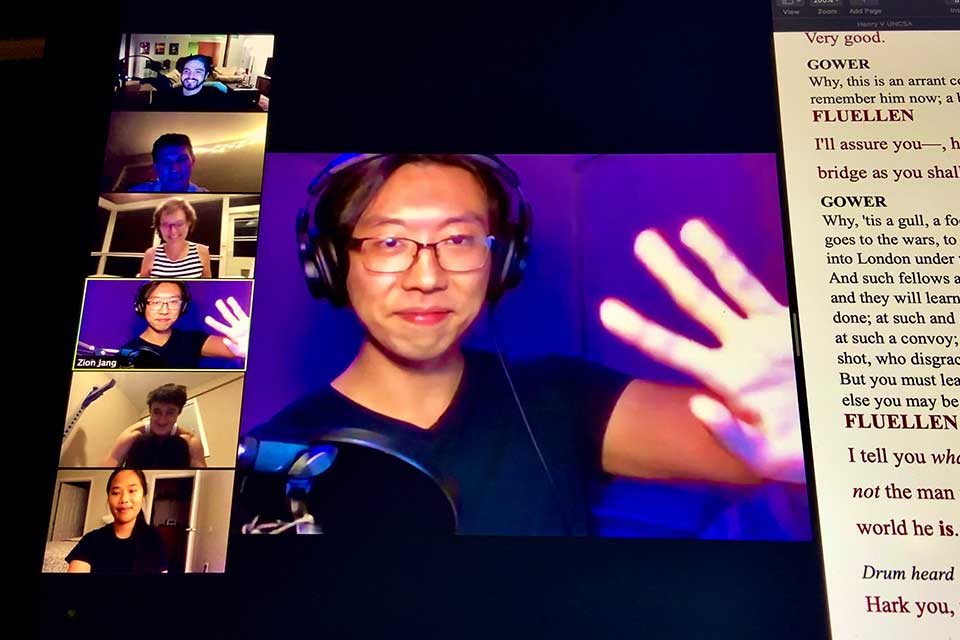 The recordings were then sent to the sound design team of undergraduate and graduate students who worked in a multilayered approach — two designers combining all of the voice recordings, one selecting and composing music for the play and one adding sound effects from the department's extensive library of commercially purchased, donated and created in-house sound effects.

"It's a play about war," Romney said, "so the actors talk and they fight. We're creating the sounds of the battle."

Even scenes without the dramatic action of a battlefield require thoughtful background and environmental sounds. For example, in one scene Henry meets with his advisers in his chambers. "We had to think about the room they're in. What's the acoustic signature of where they are? And we have to create the sounds of that room," Romney said, adding: "There's very little of the play without musical underscore."

When it’s all layered together, Becker said it is reminiscent of a bedtime story. “It’s like being read to. We get to imagine the details. We feel a part of it,” she said. “That’s why when you’ve read a book and then you see the film, you almost always think the book was better. You’ve participated imaginatively.”

The radio play experience is a rich training ground for both the actors and the sound designers.

“I teach voice and text, which is one aspect of how an actor tells a story, along with their movement,” Becker said. "We are a very visual culture now. This is a way to go back and put words and language first."

Voice skills, she said, will be in demand as students transition to careers in an industry that is forever changed by the pandemic. “Contemporary theater majors will find more opportunities than ever in voiceovers for commercials, podcasts, film, television and radio.”

Jones said the radio play is a demanding and rewarding format for his team. “First and foremost, it is a brilliant reminder that the artists of sound and music are actually able to tell a story all by themselves. In this medium, the choices that they make in portraying the story through audio also makes them set/costume/lighting designers as well,” he said. “It really pushes their creativity to the limit and presents a tremendous opportunity for growth as an artist.”

Fourth-year actor Jeremy Gill plays Henry. Additional fourth-year students in the cast include Zion Jang as the Bishop of Canterbury, Pistol, Scroop and the King of France; Jane Cooper as Alice, Montjoy, Grey and Captain Jamy; and Lawrence Davis as Dauphin, Bedford and Bates.