As the Dan River Girls, Burdette sisters bring together love of music and place

Sisters Fiona Burdette, Ellie Burdette and Jessie Burdette have been playing together as the Dan River Girls for nearly eight years now. That's quite the feat, when you consider that Jessie, the youngest, was only 9 when the three formed the band and started performing.

The trio have all been students of the high school program in the UNCSA School of Music — Fiona in the cello studio (H.S. Music '17), Ellie in the double bass and voice studios (H.S. Music '19) and Jessie in the viola studio as a current student and soon-to-be graduate.

Playing everything from bluegrass to Celtic to pop, the Dan River Girls have performed at and on many local platforms over the last several years, including Muddy Creek Music Hall, The Martha Bassett Show (Bassett was also their vocal teacher), The Ramkat and for local non-profit and fundraising events. 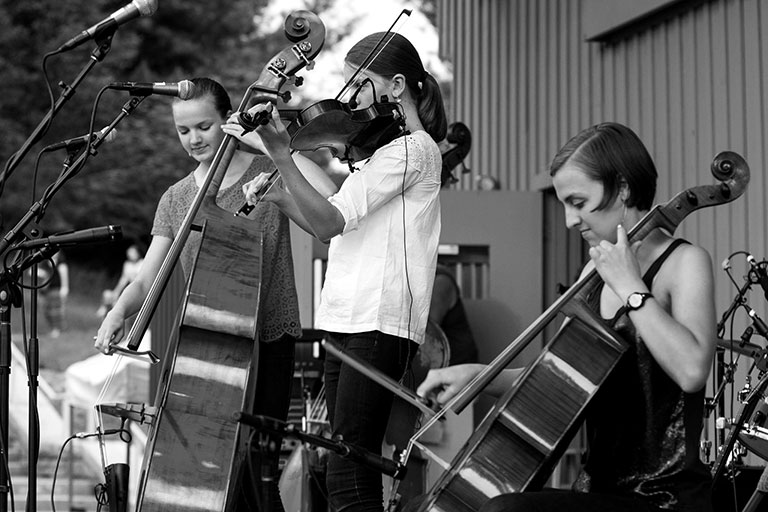 While their respective studies in Winston-Salem and Glasgow, Scotland, have them performing together less often, the Dan River Girls still have no plans to give up playing music together. Here, they share how the band got started and reflect on how their time at UNCSA has influenced them as a band and individual artists.

Tell us a little about yourselves. What are you up to and what plans do you have for the near future?

Fiona: I play the cello and mandolin. We all sing. I am currently a senior at Wake Forest University double majoring in Mathematics and German with a minor in Art History, and I am attending WFU on a Presidential Scholarship in Cello Performance. I graduate in May of 2021, and I have made it to the semi-final round to receive the Fulbright Scholarship for next year in Berlin, Germany. I plan to attend graduate school in Germany studying architecture, math or music composition.

Ellie: I play the double bass and I sing. I attended UNCSA for three years studying bass, then switched to voice for my senior year of high school. I am currently in my second year studying law at the University of Glasgow in Scotland. I will come home to N.C. after being in Scotland since last August to hopefully get an internship while I am back. And of course, play music with my sisters!

Jessie: I am a senior in high school studying viola at UNCSA. Outside of school, I play the fiddle and sing. I also play banjo and have explored several styles with my teacher, Rex McGee — from Scruggs-style bluegrass to Bach preludes from "The Well-Tempered Clavier." I have gotten more into writing fiddle tunes and experimenting with melodies. I haven’t yet decided where I will attend college after graduation.

How did Dan River Girls get started and where does the name come from? Tell us about the music you play.

Fiona: We began training classically on our respective instruments when we were each about 5 years old. We started playing together when we began taking lessons in traditional styles of music from Rex McGee and vocal lessons from Martha Bassett. The summer of 2013 was when we first began performing together and playing gigs (I was 14, Ellie was 12 and Jessie was 9). Our family used to own some land on the Dan River, and we would enjoy taking our instruments out there and having jam sessions on the banks of the river.

North Carolina is home to a rich history of traditional music, so we felt it was important to learn this music of our home state. Our mum is from Scotland, and there are a lot of connections between traditional Scottish music and traditional North Carolina music.

We play a range of musical styles, such as bluegrass, old-time, Americana, pop, Celtic and jazz. North Carolina is home to a rich history of traditional music, so we felt it was important to learn this music of our home state. Our mum is from Scotland, and there are a lot of connections between traditional Scottish music and traditional North Carolina music. We attended a music course on the Isle of Skye, Scotland, each summer from 2013-17, studying with Alasdair Fraser and Natalie Haas, so the many Celtic tunes we learned there are an important part of our repertoire. Our music mentor Rex McGee has exposed us to many other styles of music as well, such as Gypsy jazz, Brazilian choro, French Canadian, etc.

Are there any performances or opportunities you'd like to highlight? What made them special?

Ellie: It’s so hard to choose! One of the highlights of our time as a band was probably performing at the Winston-Salem Women’s March. Additionally, I’ve really enjoyed performing at the Ramkat and on the Martha Bassett Show in Elkin – the energy and the crowd is always electric. And our CD release party in 2017 at Muddy Creek Music Hall was really fun.

Jessie: A few of my favorite shows include playing at the Blue Ridge Music Center, the Ramkat, the Martha Bassett Show, Muddy Creek Music Hall, a fundraiser for the Children’s Law Center at the Millennium Center, a fundraiser and subsequent lobbying in Raleigh for the clean-up of the Dan River after the coal ash spill and the Winston-Salem Women’s March. Some of my favorite moments are when younger children come up to me and say that they have started violin lessons because they saw my playing in the Dan River Girls.

Are there any projects the band is currently working on?

Fiona: Nowadays we are only in town all together in December and for parts of the summers. We recorded our first CD, "Dan River Girls," in 2015, and it was named one of the top six family CDs of the year by Seattle’s ParentMap Magazine. We recorded our second CD, "Sounds of Skye," in 2017, after which O.Henry Magazine named us one of the up-and-coming bands to watch. We currently have enough new material to make at least three more CDs, so perhaps we will record another album in the near future.

What has been the experience of playing music together as sisters? Any benefits or challenges?

Ellie: There are definitely challenges in that we all can have very strong differing opinions on how we arrange a particular song, leading to heated discussions. But overall, I think the benefits outweigh the challenges. We are able to have what is often referred to as "sister harmonies," meaning our voices blend together nicely. Living under the same roof (at least for a while) made jam sessions and rehearsals quick and easy to organize — if one person had an idea for a song, it wouldn’t take long to work out because we would all be nearby. 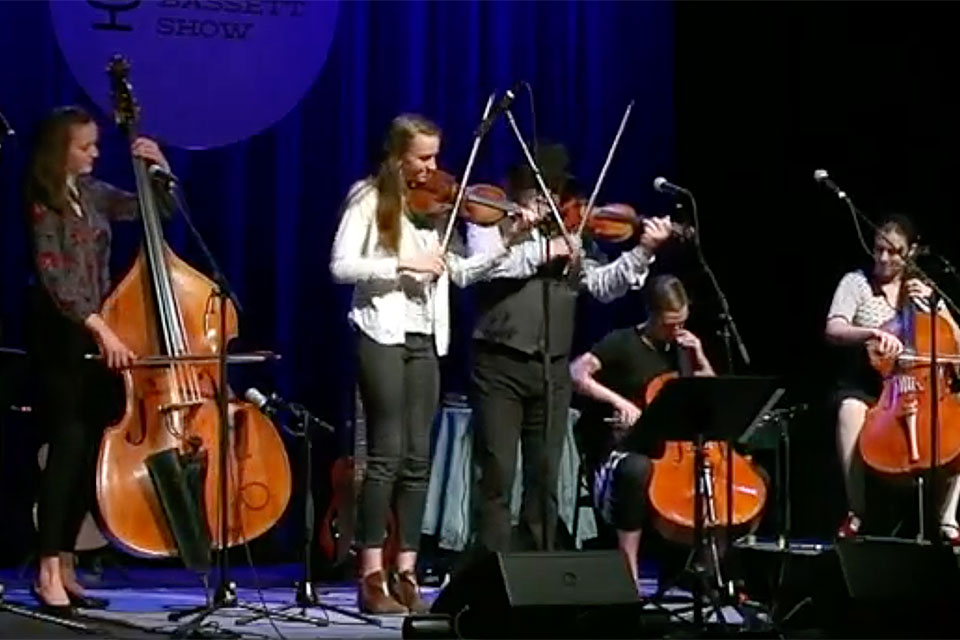 The Dan River Girls performing on The Martha Bassett Show with John Murray of Lochee, Alasdair Fraser and Natalie Haas.

All three of you have attended the high school program at UNCSA. How did you hear about it and what made you decide to attend?

Fiona: We have known about UNCSA since we were quite young and would regularly attend performances there. Our house is three blocks from UNCSA, so we walked to high school each day. I took lessons from Brooks Whitehouse, the cello professor at UNCSA, when I was in seventh and eighth grade. So, we have always been aware of the incredible opportunities that UNCSA offers, and we were excited to take advantage of these in the high school program.

Ellie: I think growing up in Winston-Salem, UNCSA has always been there, whether it was attending Spring Dance or Fletcher Opera Institute performances, or drama productions and orchestra concerts. I took lessons with Paul Sharpe, the double bass professor at UNCSA, as soon as I started playing bass and he encouraged me to audition for the high school program. When I got in, it seemed like too amazing of an opportunity to let slide, and I am so glad I chose to become a Fighting Pickle!

How have your studies at UNCSA influenced your band or perhaps your other musical interests? Has it impacted what you did (or will do) after graduation?

Fiona: Our studies at UNCSA encouraged us to continue working hard on classical music and gave us numerous opportunities to hone our performance and music theory skills. Getting to play in elite chamber groups and in the UNCSA Orchestra helped with our ensemble playing, and the other way around—the experience playing in our band helped with our classical music ensemble playing. My time at UNCSA enabled me to receive the Presidential Scholarship in Cello Performance at Wake Forest University, which I have taken advantage of these past four years.

Ellie: I think overall my biggest takeaway from UNCSA is confidence. It was a sort of subtle confidence in my playing and my singing that I wasn’t really aware of, but other people remarked on. Although I have chosen not to pursue music professionally, music will always be a big part of my life. UNCSA has given me the skills to walk into any music session in Glasgow or anywhere else and know that I can hold my own.

Jessie: UNCSA is both challenging and rewarding. I get to train with viola professor Ulrich Eichenauer, who has helped me greatly improve both my technique and my artistry. And it is great to be around other students who are dedicated to their art.

Has the pandemic affected your work with Dan River Girls? If so, how have you adapted?

Ellie: We normally are all home over December for the winter break, which is a great time to learn new repertoire and just have time to play some music. This year I was unable to make it home because of the pandemic, so we missed that experience. Also, there are several amusing videos of when I returned home from Scotland at the start of the pandemic and had to quarantine for two weeks. We played music with Fiona and Jessie on one side of the door and me on the other or socially distanced across the lawn. 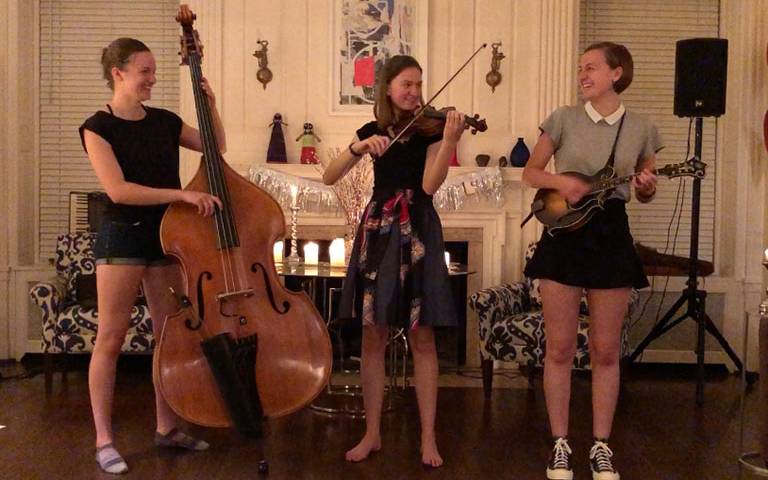 Jessie: One unexpected benefit of the pandemic was that we were all home from March until August [2020]. However, the downside of that was that we never got to play for anybody. Like all musicians, I miss the exchange of energy with an audience and the joy of sharing music with an audience. The gigs we had lined up for the summer were cancelled, but recorded a series of Facebook videos from our living room. This summer, if COVID cases continue to fall, we hope to play some concerts, including one at Triad Park and one at the Reeves Theater.