Film of live performance of the "Nutcracker" will be available on demand beginning Monday, Dec. 20

“The Nutcracker,” the beloved holiday tradition, has sold out for 11 performances at the Stevens Center in downtown Winston-Salem. But fans of the timeless classical ballet can experience the magic from the comfort of their own homes by purchasing access to an on-demand film of this year’s live stage production, shot before a live audience.

A one-time fee of $75 per household provides unlimited access to the high-definition film starting Monday, Dec. 20, through June 30, 2022, plus exclusive behind-the-scenes content including videos with the School of Music and the School of Dance, a “Nutcracker” history, videos of alumni sharing memories of “The Nutcracker” at UNCSA, a social wall to connect with friends, fun games, trivia, coloring sheets, Zoom backgrounds, and access to the 2020 “Nutcracker” film.

In addition, PBS North Carolina will offer a one-time-only broadcast of the 2021 production exclusively for North Carolinians at 6 p.m. on Christmas Day.

"Thousands have been able to join us this year at the Stevens Center for a thrilling performance of the time-honored story told in a fresh new way,” said UNCSA Chancellor Brian Cole. “Now people around the world can enjoy our high-quality recording of the live stage production, featuring Ilya Kozadayev’s brilliant new choreography performed with grace and precision, Tchaikovsky’s beloved score performed beautifully as conducted by Guest Artist Jiannan Cheng, lush scenery and props, and exquisite costumes. 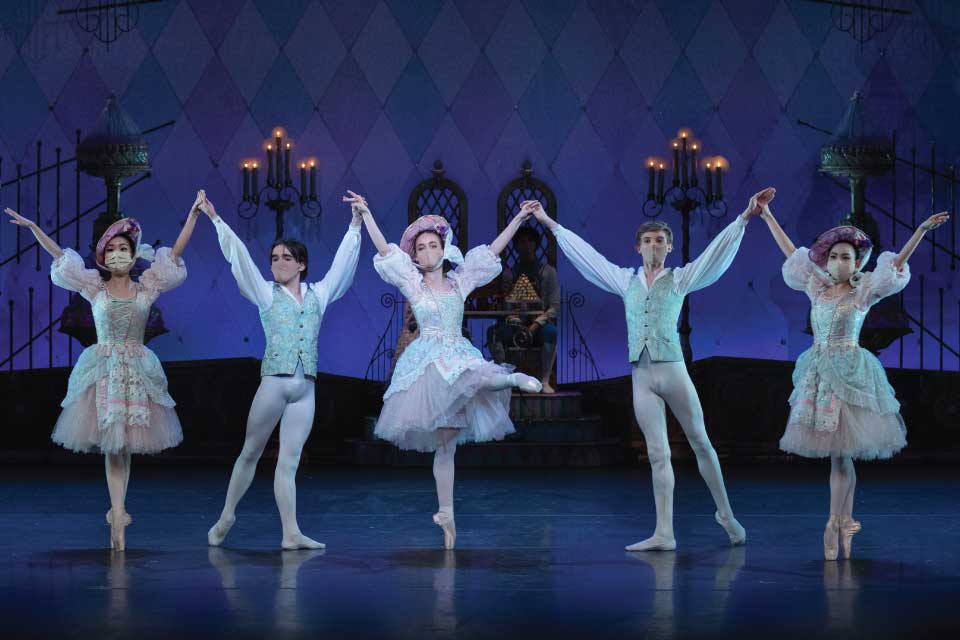 “We are thrilled that everyone can delight in the work by students in our schools of Dance, Music, and Design & Production, and we are grateful for our partnership with PBS North Carolina that will allow citizens of our state to watch for free,” Cole added. “I know our viewers will be filled with pride knowing their purchase of the on-demand experience will support scholarships for our talented student-artists.”

Dean Endalyn Taylor of the School of Dance said the “Nutcracker On-Demand Experience" offers an unparalleled opportunity for friends and family to create enduring memories together. “As a young artist, some of my fondest memories are of being on stage or in the audience watching ‘The Nutcracker’ with my family,” she said. “It was an opportunity to be swept up in the pageantry of the performance as well as the wonder and warmth of the holiday spirit.

“I am thrilled that we can provide an occasion to once again smile, laugh and dream together and revel in the peace and joy of the holiday,” she added.

Kozadayev’s choreography is a new imagining of the original stage production. Clara and her Nutcracker Prince remain front and center in the new production. Also returning are the favorites including the Sugar Plum Fairy and her Cavalier, the Snow King and Queen, Snow Flakes and Flowers, as well as the showstopping Trepak.

UNCSA has partnered with local companies JerFilm Productions and Ovation Sound to create the film, using five cameras, multiple microphones and a professional stereo audio mix that will sound as if listeners are in the orchestra pit with the musicians.

“Viewers will see the fantastic new choreography from several optimal vantage points that accentuate the beautiful architecture of movement our dancers bring to life on the stage complemented by Guest Artist Lisa J. Pinkham’s wonderful lighting design,” said Assistant Dean of Dance Jared Redick, who is executive producer of “The Nutcracker.”

Redick said he and Kozadayev collaborated closely with the filmmakers to ensure that each moment on stage is captured by the best camera angle. “Viewers of the on-demand film will see every moment and from perspectives you would not have the opportunity to see in the theater. The multiple camera angles bring more magic into the home-viewing experience,” he said.

An award-winning dancer and choreographer, Kozadayev was born to a family of dancers in St. Petersburg, Russia, where he received his dance training from Vaganova Ballet Academy. He also trained with the School of American Ballet in New York City, Academy of Colorado Ballet and graduated from the John Cranko Ballet Academy in Stuttgart, Germany. He holds an M.F.A. from Jacksonville University.

Guest Conductor Cheng is director of the Rowan University Symphony Orchestra in Glassboro, New Jersey, conductor of the university’s opera productions and instructor of conducting. She is a Doctor of Musical Arts candidate in orchestral conducting at the University of Cincinnati College-Conservatory of Music. Cheng completed her undergraduate studies at the China Conservatory of Music in Beijing and earned her master’s degree from the University of Washington in Seattle.

Cheng made her European debut conducting and working with the Orchestra Giovanile Luigi Cherubini, Stuttgart Philharmonic, the Georgian Chamber Orchestra Ingolstadt and the Munich Hochschule Symphony Orchestra. Her teachers and mentors have included world-renowned conductors such as Riccardo Muti, Kurt Masur and Marcus Bosch, to whom she served as an assistant in Heidenheim, Germany, and led a successful performance of Verdi’s “Nabucco.” She has been conducting fellow of the Cincinnati Symphony Orchestra and the Miami Symphony Orchestra.

Guest Lighting Designer Pinkham began her relationship with “The Nutcracker” in 1984 and it is still ongoing. Currently resident lighting designer for Houston Ballet, Pinkham has been designing lighting for dance for more than 35 years, working with classical, contemporary and modern companies. Her lighting can be seen in the repertoires of many national companies including American Ballet Theatre, Boston Ballet, Houston Ballet, Joffrey Ballet, Pacific Northwest Ballet and San Francisco Ballet. Internationally her work is included in the repertories of Birmingham Royal Ballet, Norwegian National Ballet, Hong Kong Ballet, Berliner Staatsballett, Wiener Staatsballett and Singapore Dance Theatre. From 1991-99 she was lighting director for San Francisco Ballet and designed the lighting for over 35 of the company’s productions. She was lighting designer for Alonzo King’s LINES Contemporary Ballet from 1994-2001.

Redick began his ballet training with his mother, Julia Cziller Redick, in Reston, Virginia. He is a graduate of the UNCSA high school ballet program, where he studied with founding Dean of Dance Robert Lindgren. He went on to train at Mikhail Baryshnikov’s School of Classical Ballet and at the School of American Ballet. He danced professionally with San Francisco Ballet and was a soloist with Miami City Ballet, Suzanne Farrell Ballet and Boston Ballet. He has taught nationally and internationally and has served as guest ballet master with Finnish National Ballet, Houston Ballet, Nashville Ballet and Cincinnati Ballet. Redick is a recipient of the National Foundation for Advancement in the Arts Award for Exceptional Achievement and in 2012 was appointed associate fellow of Pierson College at Yale University. Since 2013, Redick has been a judge and master teacher for the Youth America Grand Prix.  He has served as assistant dean since 2013 and was interim dean of the School of Dance during the 2020-21 school year.