UNCSA has announced the recipients of the 2022 William R. Kenan, Jr. Excellence Scholarships and the Sarah Graham Kenan Scholarship, its most prestigious, merit-based scholarships.

The Kenan Excellence Scholarship provides selected incoming students with full tuition, required fees, and room and board for four years of undergraduate study. The Sarah Graham Kenan Scholarship goes to a rising college senior and covers tuition, fees, room, and board, plus a $3,200 stipend for related expenses.

“It's hard to put into words just how special the students are at UNCSA – even more so when it comes to describing the amazing accomplishments of the Kenan scholarship recipients,” said Executive Vice Chancellor and Provost Patrick J. Sims. "To say they are stellar artists as well as highly motivated students demonstrating the very best of academic excellence and artistic leadership is a bit of an understatement.

“These students are outstanding examples of our core institutional values of community, collaboration, imagination, integrity and grit. I have no doubt that they will literally and figuratively change the world in the pursuit of their artistry and personal development. They are truly deserving of our most prized scholarships,” Sims concluded.

Nominated by the deans of the five arts schools from their top accepted applicants, Kenan Excellence Scholars are chosen based on measures that include abilities in their arts discipline, capacity to lead and motivate, extracurricular endeavors, and academic achievement. The Kenan Excellence Scholarships were established at UNCSA in 2005 by the William R. Kenan, Jr. Charitable Trust and later endowed by the Trust in 2011 with a $6 million grant, the largest one-time private gift in the school’s history. In 2019, an additional $5 million gift was provided to expand support of the scholarship program.

The Sarah Graham Kenan scholarship goes to a rising college senior with outstanding characteristics in talent and artistic achievement, excellent academic performance, and exceptional leadership and citizenship qualities. The Sarah Graham Kenan Scholarship was established in 1984, and one rising UNCSA college senior has received this scholarship each year since the 1984-85 academic year. 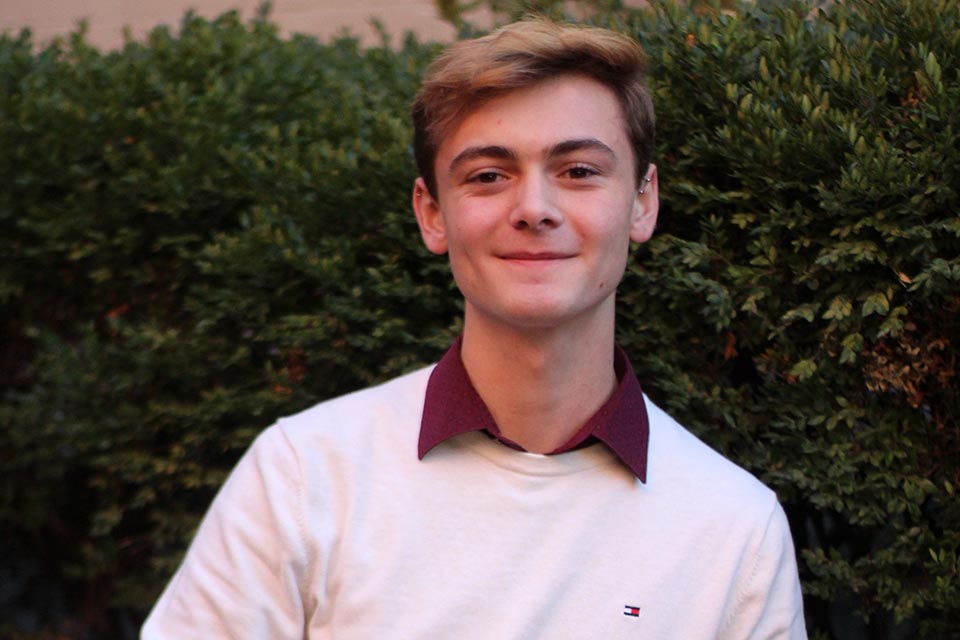 “It is difficult for me to envision someone more ideal for the diverse and collaborative environment here at UNCSA,” said Saxton Rose, dean of School of Music. “With his versatile musical skills, and experience in musical theater, he is a perfect fit for future offerings in the School of Music.”

Studying horn for seven years, Oncken has performed in many ensembles, including the Missouri All-State Band; the St. Louis Metro-8 District Honor Band for four years, most recently as principal; and the Francis Howell North Wind Ensemble, where he was principal for the past three years. As a member of St. Charles County Youth Orchestra, he served as principal for three of his five years.

After making the Missouri All-State Choir in 2021, Oncken was selected for the Bayer Fund Artist-in-Training program for Opera Theater St. Louis. A member of the Francis Howell North Mixed Chamber Choir for three years and the Francis Howell North Concert Choir for four years, he has served as bass section leader for both ensembles since 2020. His high school choir performed at Carnegie Hall with Ola Gjeilo by invitation in 2019, and is currently preparing for their second concert there under the direction of Eric Whitacre. In addition to classical voice, Oncken performs in musical theater. Roles have included Mal in “The Addams Family,” Simba in “Lion King Jr.,” and Niko in “The Wizard of Oz Jr.” This year, Oncken was the pianist and vocalist for his school’s premier jazz ensemble.

Over the past four years, he has been the recipient of nine gold medals and three silver medals at the MSHSAA State Solo and Ensemble Contest, competing on horn and voice. As a member of the LGBTQIA+ community, Oncken was recently a guest artist with the Gateway Men’s Chorus where he was featured on both horn and voice. 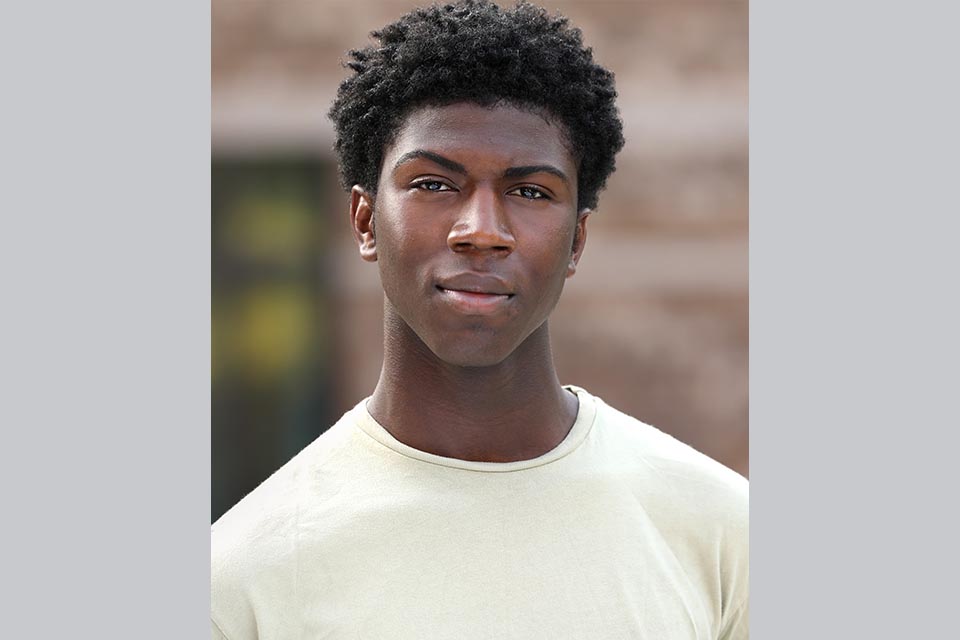 From Galivants Ferry, South Carolina, Christian Moody is a senior at the South Carolina Governor’s School for the Arts and Humanities. Moody has acted in productions of “The Trojan Women,” “Iphigenia in Aulis,” and “Into the Woods,” to name a few. Also known for his baritone singing voice, Moody won third place in the William Warfield Vocal Scholarship Competition for African American high school students. He was awarded a certificate of excellence in vocal performance by Claflin University (HBCU) and was accepted into the all-county chorus in Horry County.

“Christian Moody’s audition was among the top handful of this audition tour and perhaps one of the finest singing talents to audition for us ever,” said Quin Gordon, director of recruitment for the School of Drama. He called Moody “a rare and special talent, one that our school was made for.”

Moody’s desire to understand what shapes human behavior and what ultimately influences our actions inspired his devotion to acting. He seeks to apply his life experience and interest in observing people when developing his character roles. 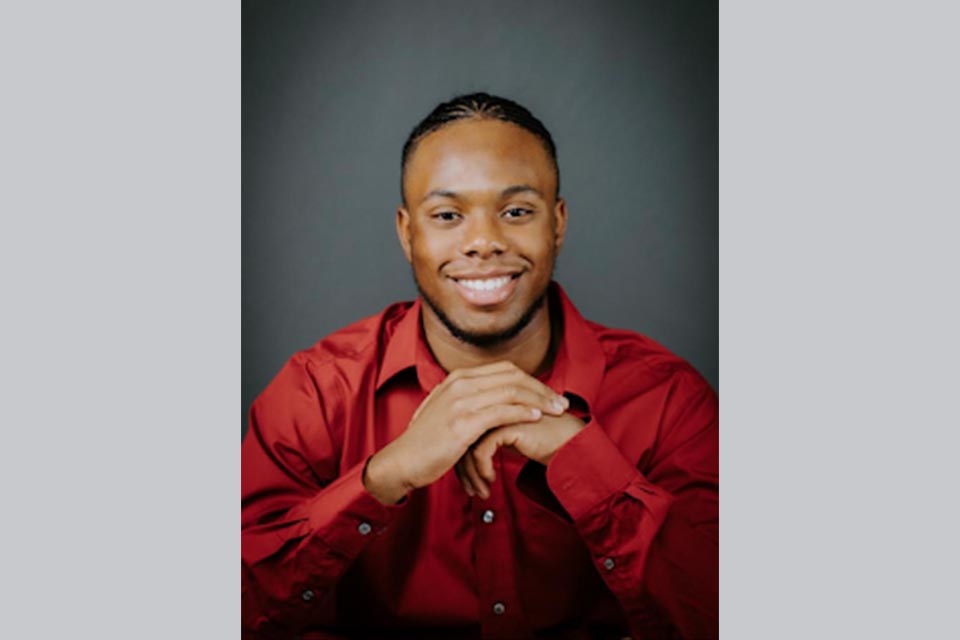 Shows he has performed in include “Lion King Jr.,” “Clue: On Stage,” “Into the Woods,” “Elephants Graveyard,” and “Frozen Jr.,” and he was named an “All Star” cast member by Mississippi’s annual Drama Club competition.

“Devon was a candidate that we saw early in the audition cycle who remained one of our top candidates due to his huge artistic potential, strong transcripts, and clear leadership skills – a student that deserves to be on our campus,” said Quin Gordon, director of recruitment for the School of Drama.

In 2020, Harbin played Tucker Ray in a movie concept titled “Black Privilege White Power” directed by Daniel Danielson. In 2022, he played the role of Danny in the action film “A Day to Die” starring Bruce Willis. He trained at the Janice Wyatt Mississippi Summer Arts Institute and StoryWorks Theater.

Harbin is a member of the National Honor Society, Beta Club, and National Society of High School Scholars, as well as the Youth Leadership Council at GRAMMY Museum Mississippi. 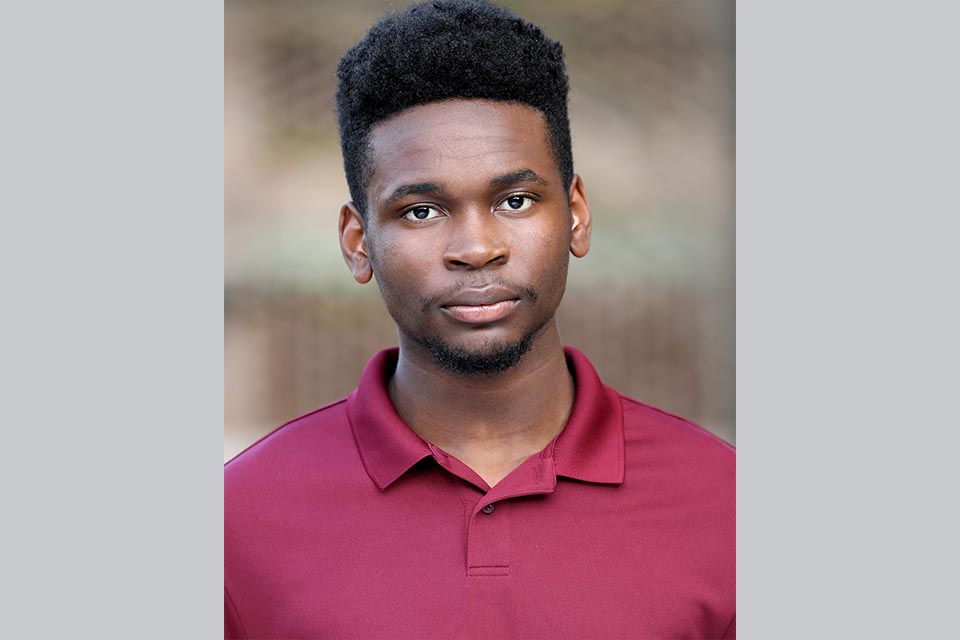 Isaiah Gray, a lighting designer from Columbia, South Carolina, began his training at the South Carolina Governor’s School for the Arts and Humanities, where he served as the Multicultural Club’s 2021-22 co-president, and directed, choreographed and produced numerous performances.

“Isaiah is a clear leader in his community with strong artistic talent, humility and ambition,” said Michael Kelley, dean of the School of Design and Production. “I have no doubt in his potential success.”

Gray believes strongly in the impact artists have on humanity. He founded his school’s chapter of The Color Cabaret, a performance project that uplifts the voices of artists of color. He has also served as his studio’s tradition leader, working closely with teachers and peers to create a productive environment on issues of outreach, diversity and well-being. 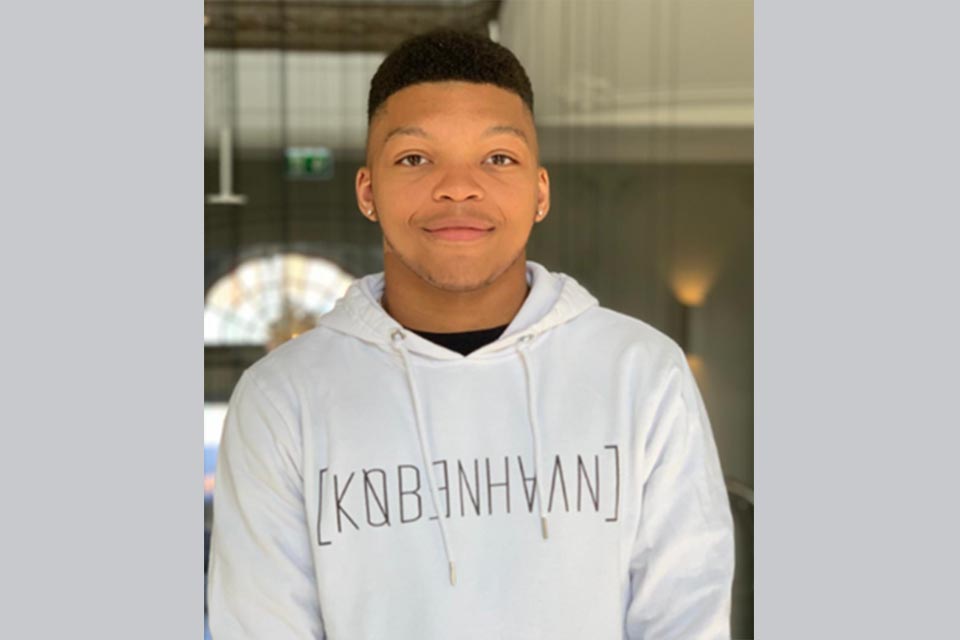 From Bethesda, Maryland, Leander Gray is a contemporary dancer and creative writer at the Fusion Academy in Rockville, Maryland. With a passion for blending dance genres and storytelling through movement expression, Gray’s dance roots originate in hip-hop and freestyle. Before he learned to dance, Gray earned a black belt in Taekwondo where he built strength, balance and body awareness.

Leander Gray’s movement repertoire quickly expanded to include ballet, modern and West African dance when he studied at the Duke Ellington School of the Arts in Washington, D.C. Today, Gray dances with the CityDance School and Conservatory in Rockville, Maryland, and at Elements Urban Arts Collective, where he performs throughout the Greater Washington, D.C., area. He has studied with dance artists and choreographers through the Kennedy Center, Philadanco! at CityDance, Alvin Ailey American Dance Theater, Joffrey Ballet, Koresh Dance Company, Red Sky Performance Company, Akram Khan, and CultureShock, and been mentored by Keith Thomas, formerly of Dance Theater of Harlem, and Stephen Nakagawa, current Washington Ballet principal who studied at UNCSA.

“Leander Gray immediately stood out to us in his audition,” said Endalyn Taylor, dean of the School of Dance. “He has tremendous potential in contemporary dance. … He is a real mover who picks up material readily and performs it with explosive power, musicality and expressivity.”

Because of his of his ability to choreograph, inspire and teach, Leander Gray is a teacher’s assistant at the studios he attends. He volunteered with YMCA D.C. students during the pandemic and hopes to use his newly acquired knowledge of sign language to bring dance expression to the deaf. Gray envisions a calling to reinvent and reimagine the art of dance, as a unique opportunity to hold a mirror to society, so all may know and affirm the truths of others. As a citizen artist, he wants the chance to change the narrative through his art. 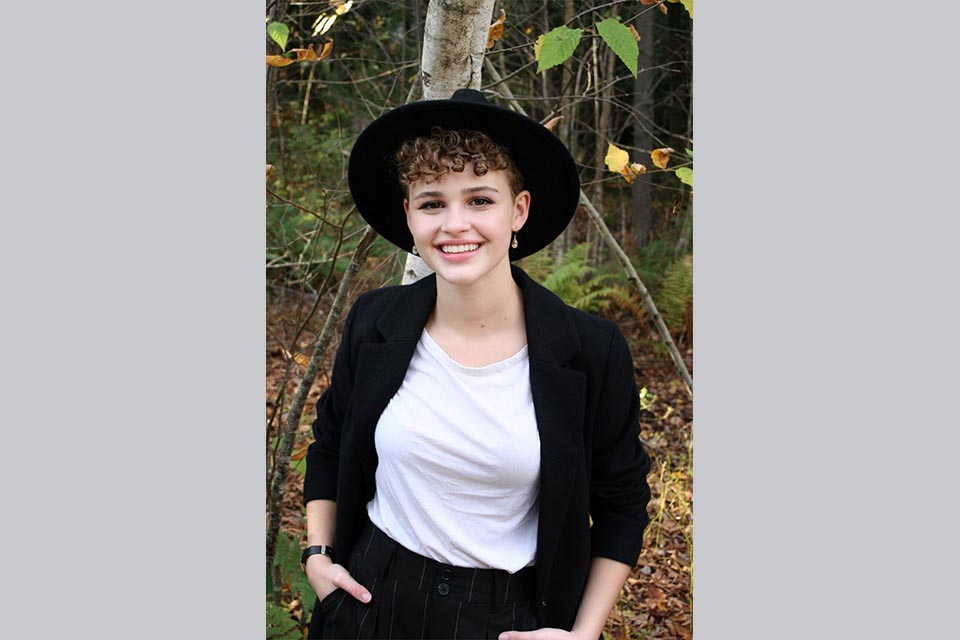 Lydia Eldredge is a props designer from Westford, Vermont. She was the props master at Essex High School for the past four years and worked as a props artist intern for Nikki Kulas, properties manager of First Stage. Eldredge has worked on a number of productions, including “Big Fish,” “Frankenstein,” “Cry-Baby” and “The Little Mermaid.”

“It is apparent that she has accomplished a tremendous amount of exceptional work throughout her high school education,” said Dean Michael Kelley of the School of Design and Production. “She not only is a talented student who has been continually recognized for her academic achievements, but also strives in engaging with professional opportunities to further her understanding and development in stage properties.”

Eldredge’s leadership positions have included strand leader for the Academy of Performing and Visual Arts and board member of the Global Leadership Program. Her most recent project for the academy was designing and organizing a mental health awareness event, which featured experts, speakers, live performers and a public art installation. Eldredge is passionate about destigmatizing mental illness, and is a supporter of LGBTQ+ rights.

Eldredge has won numerous awards academically, and is a member of the National Society of High School Scholars and National Honor Society. 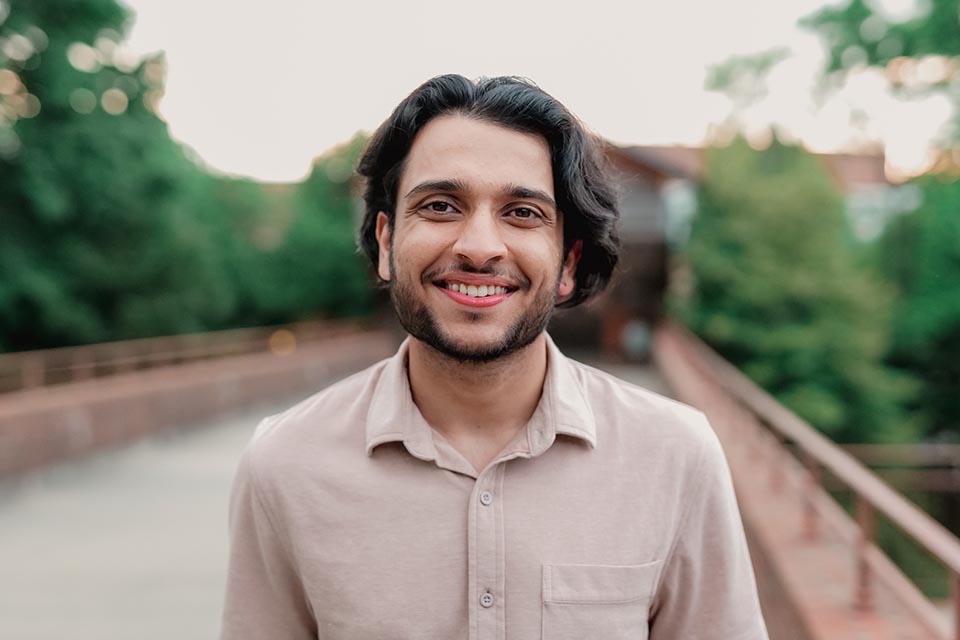 Rohit Lila Ram’s watchwords are hard work, humility and balance. Originally from Karachi, Pakistan, he started his artistic journey in dance and theater and received a best actor award in high school. As his artistic education advanced, he became more interested in film and visual storytelling, and despite encountering societal barriers, he convinced those in his circle that he can pursue film as a sustainable career.

At 19, Lila Ram flew to the United States alone with two suitcases. Existing in a new country led him to explore, extract and experience different styles of filmmaking, culture, people and new ways of living life.

Lila Ram has worked on about 20 short films in different capacities, mainly as a producer and first assistant director. He has also worked for multiple independent media/film companies. Believing he can grow and explore further by doing multifaceted projects, Lila Ram executive produced UNCSA’s first episodic series, “Masterpiece,” with the graduate school. He also produced an international project with the exchange students from the Film University Babelsberg Konrad Wolf, Germany. In addition to all of his film projects, Lila Ram has served as an executive in the Student Government Association, a student leader in Student Engagement, and a film ambassador for the Admissions department.

In Lila Ram’s nomination recommendation, officials from the School of Filmmaking wrote that he is: “dedicated to absorbing all facets of his education at UNCSA by rigorously applying himself to projects and classes in his discipline, as well as across the campus. … (He) demonstrates the highest standards of artistic work, academics and citizenship. Besides his creativity, he is a generous member of our community, always willing to support fellow students on their projects. … (Rohit) was recently identified as a truly exemplary student-artist with exceptional leadership abilities, as well as a strong grasp of professional filmmaking practices. He is destined to represent UNCSA after graduation in 2023 as a shining star.”

This summer, Lila Ram plans to intern at the Cannes International Film Festival and work on a feature film. Entering his senior year at UNCSA, he plans to craft stories that make the audience feel something different, and he is committed to make films worldwide, promoting diversity, culture and experience.