From the world's stages to Winston-Salem, René Barbera's global career is propelled by UNCSA

René Barbera arrived at UNCSA with a double scholarship. And a high B.

It was 2004, and students and the School of Music faculty gathered for the “first-of-year hearings” — when faculty become acquainted with new and returning students for assignments and placement. There was great interest in the young tenor from Texas, who was the undergraduate vocal program’s first-ever Fletcher Scholar, receiving significant merit-based financial support.

Barbera sang the famous aria “La donna è mobile” from Verdi’s “Rigoletto,” which ends with a vocally punishing high B. When he finished, one faculty member uttered an expletive in astonishment. Barbera’s soon-to-be vocal teacher, Voice Department Chair Marilyn Taylor, was amazed. “High notes were nothing for him,” she remembered. “I heard how effortless it was for him. This was one of those voices that didn’t have to think about how to achieve the top. That was the voice he had. It’s a natural talent. He was fearless.”

Since that auspicious day, Barbera has appeared on the stages of the world’s major opera houses and concert halls, and has sung, by his count, 35 different roles. He was a winner of the Metropolitan Opera National Council Auditions in 2008, and won top awards at the Operalia Competition in 2011. He made his Metropolitan Opera debut in Rossini’s “L’Italiana in Algeri” in 2016, and has been delighting audiences at Teatro alla Scala, Paris Opera, Palau de les Arts, Opéra Royal de Wallonie-Liège, and Dutch National Opera, among many others. In April of this year he sang the role of Nadir in Bizet’s “The Pearl Fishers” with The Dallas Opera, and will return to the Met in the 2022-23 season as the Italian Singer in Richard Strauss’s “Der Rosenkavalier.” 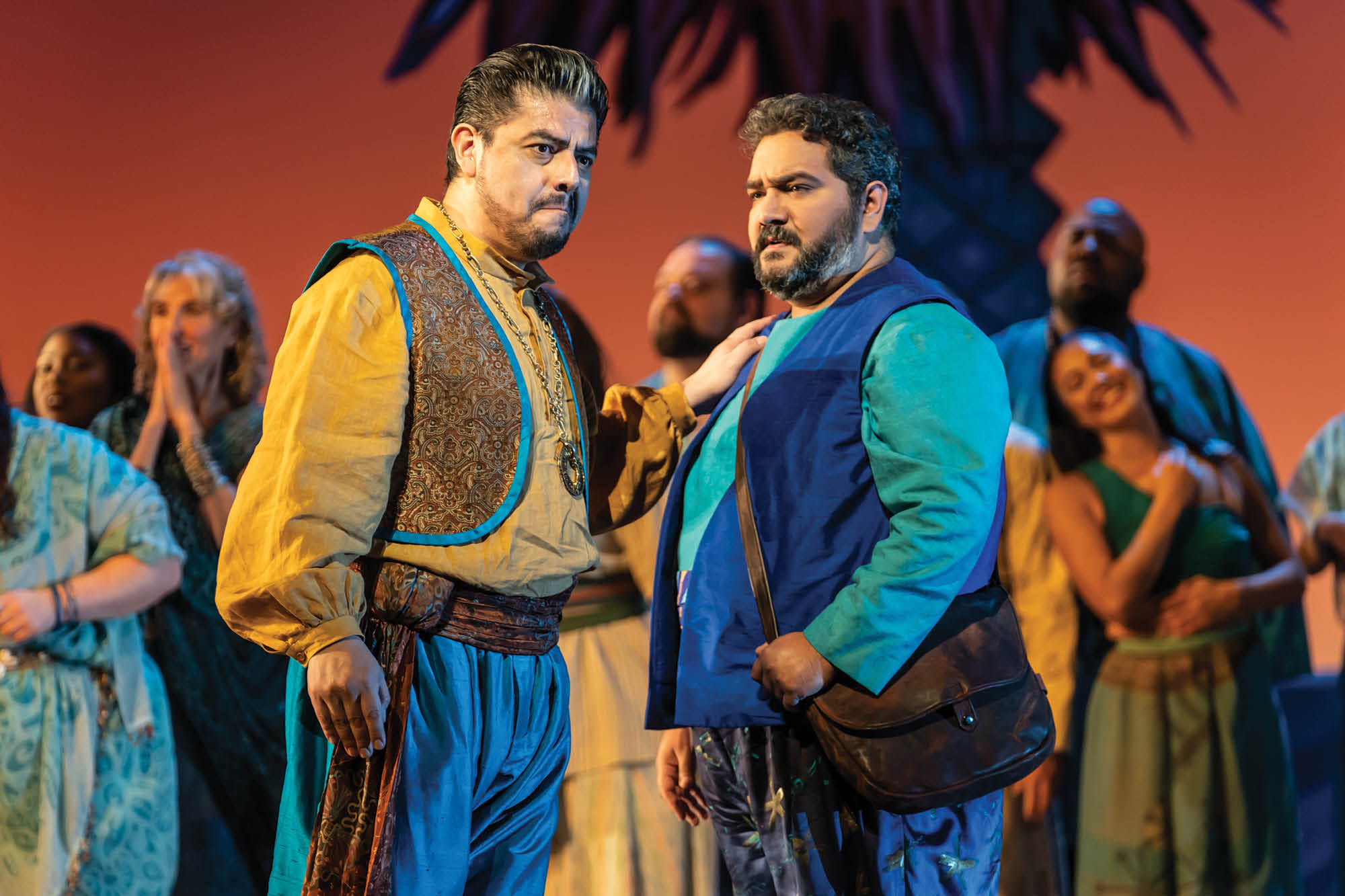 Barbera as Nadir in "The Pearl Fishers"

The critics have raved. “Barbera, a fast-rising and increasingly appreciated presence in the world of opera, has a voice every voice teacher dreams about,” wrote the San Diego Union-Tribune after a recital in 2015. After his performance as Alfredo in Verdi’s “La traviata,” Texas Classical Review commented: “He definitely has a ready-made career niche in roles of this ilk, and, at this point, appears headed toward stardom.” The Seattle Times commented on his performance in Rossini’s “La Cenerentola,” noting that “his high Cs and Ds are as viscerally exciting as his bravura coloratura technique.”

“I love to perform,” Barbera said with a laugh. “I tend to be a performative person. If I get the attention of a room, I will relish it!” And he especially relishes the memories of singing “La traviata” at La Scala — one of three operas he has performed in that famous house — and his Met debut, despite the fact that “Walking out on that stage is one of the most nerve-wracking things you can do.”

Barbera was born Erich René Barbera in Laredo, Texas, and at a young age moved to San Antonio. At the age of 10 he joined the San Antonio Boys Choir as a boy soprano, in addition to studying piano for six years. After singing in choirs throughout high school, he received a scholarship to the University of Texas at San Antonio to pursue a degree in music education. Despite words of encouragement that he had soloist talent, he dropped out and went to Colorado to be with his brother, quickly finding a job doing windshield repairs at car washes. “I moved there to find myself,” he explained. “I had to get out of Texas. I didn’t think performing was the thing I would do. I didn’t want to quit singing but didn’t think it would be a profession.” Not wishing to close the door, however, he took a voice lesson with Martile Rowland, who urged him to join a summer opera program she directed in Colorado Springs called the Vocal Arts Symposium. It was there that he met Steven LaCosse and James Allbritten, Music faculty members at UNCSA who are now the artistic director and music director (respectively) of the A.J. Fletcher Opera Institute, the school’s graduate-level opera training program. They saw his potential and arranged for his scholarship.

For the next four years, Barbera was in a whirlwind of classes. “My time as an undergrad at UNCSA was outrageously busy,” he said. “Classes all day, followed by opera rehearsals in evenings, choir rehearsals and concerts, papers to write, tests to study for, operatic roles and song repertoire to learn, and trying to make a little money on the side singing at church, weddings and funerals. The school taught me how to juggle far more than I thought I was capable of.

“Admittedly,” he noted, “I didn’t always manage to keep it entirely together and dropped the ball more times than I could possibly count!” In fact, he said, “I was a typical college student. I was young; I didn’t know what I wanted to do with my life. I was not super-focused. There was a girl,” he laughed. “In my senior year we had a big breakup. I gave myself a week to feel the pain.” At that point, he shifted gears, got a headshot, made an audition CD, and sent out applications for young artist programs and competitions across the country. “It was time to take the momentum and run with it,” he said.

In fact, he didn’t graduate.

“He sang his senior recital and went off to his first audition,” recalled Taylor. “It was for the Merola Opera Program in San Francisco. He looked like a young Caruso. They took him immediately.” 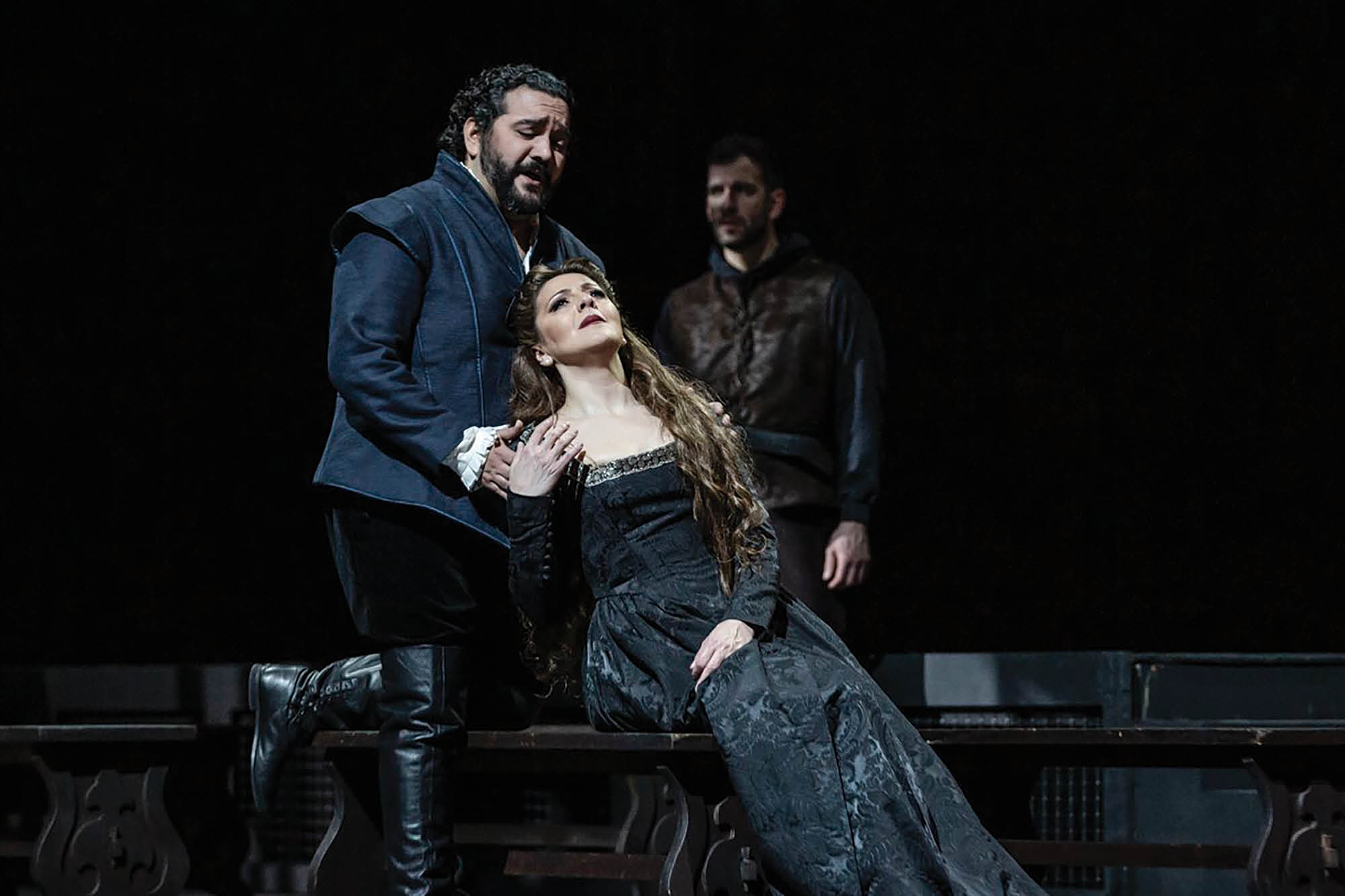 From there it was on to the Florida Grand Opera Young Artist Program, and then to Lyric Opera of Chicago’s Ryan Opera Center. In 2011, he was the first-ever sole recipient of all three top awards of Placido Domingo’s Operalia Competition in Moscow, winning the First Prize for Opera, the First Prize for Zarzuela (a form of Spanish musical theater), and the Audience Prize — an event that he remembers as “an out-of-body experience.”

Barbera, whose family is of Mexican lineage, spoke English and Spanish growing up. “In middle school and high school I took Spanish classes to bolster my skill set. I worked really hard to master it.” Indeed, his language skills have come in handy when he learns a new role in a foreign tongue. “I speak Italian, not fluently, but very well,” he laughs, remembering how a bartender in Spain asked why he spoke Spanish with an Italian accent! “I’m able to communicate and be understood in German. My French is not so good, although I can pronounce it very well and can understand a fair amount if spoken slowly.”

His roles have taken him around the globe — to Milan and La Scala, Vienna and the Wiener Staatsoper, Genoa and the Teatro Carlo Felice, Rome and the Teatro dell’Opera di Roma, Palermo and the Teatro Massimo, Tokyo and the New National Theatre, and Valencia and the Paulau de les Arts Reina Sofía, to name but a few. He has also toured with musicAeterna, performing Verdi’s Requiem in 10 cities, including Paris, Brussels, Cologne, Hamburg, Vienna, and at The Shed in New York City.

As Barbera gained increasingly more engagements in Europe, he and his wife, Anna — whom he met when both were living in Chicago — moved to Berlin in 2017. It was a convenient locale and they loved it. Then the pandemic hit, work dropped away, and he opted not to work. “I decided that the risks for myself and my wife were too high,” he explained. And so, in the summer of 2020, while still in Europe, Barbera finally had the chance to do something he had always wanted to do: He took the undergraduate classes online that he had missed at UNCSA. “I got the official news that I had completed my degree while I was in Sicily,” he recalled. “I’ll never forget that moment. I called my wife, crying, and she was terrified, thinking that someone had died!”

The Barberas returned to the U.S. in 2021, and René, now 38, was able to continue his scholarship and complete his master’s degree in vocal performance at the A.J. Fletcher Opera Institute at UNCSA, which this year celebrates its 20th anniversary.

“Years from now I really want to be able to settle down and teach voice in a university or conservatory setting,” he said. “Knowing that a bachelor’s degree would be insufficient for such a position, I opted to take this year to get my master’s, which would begin to open those doors.” 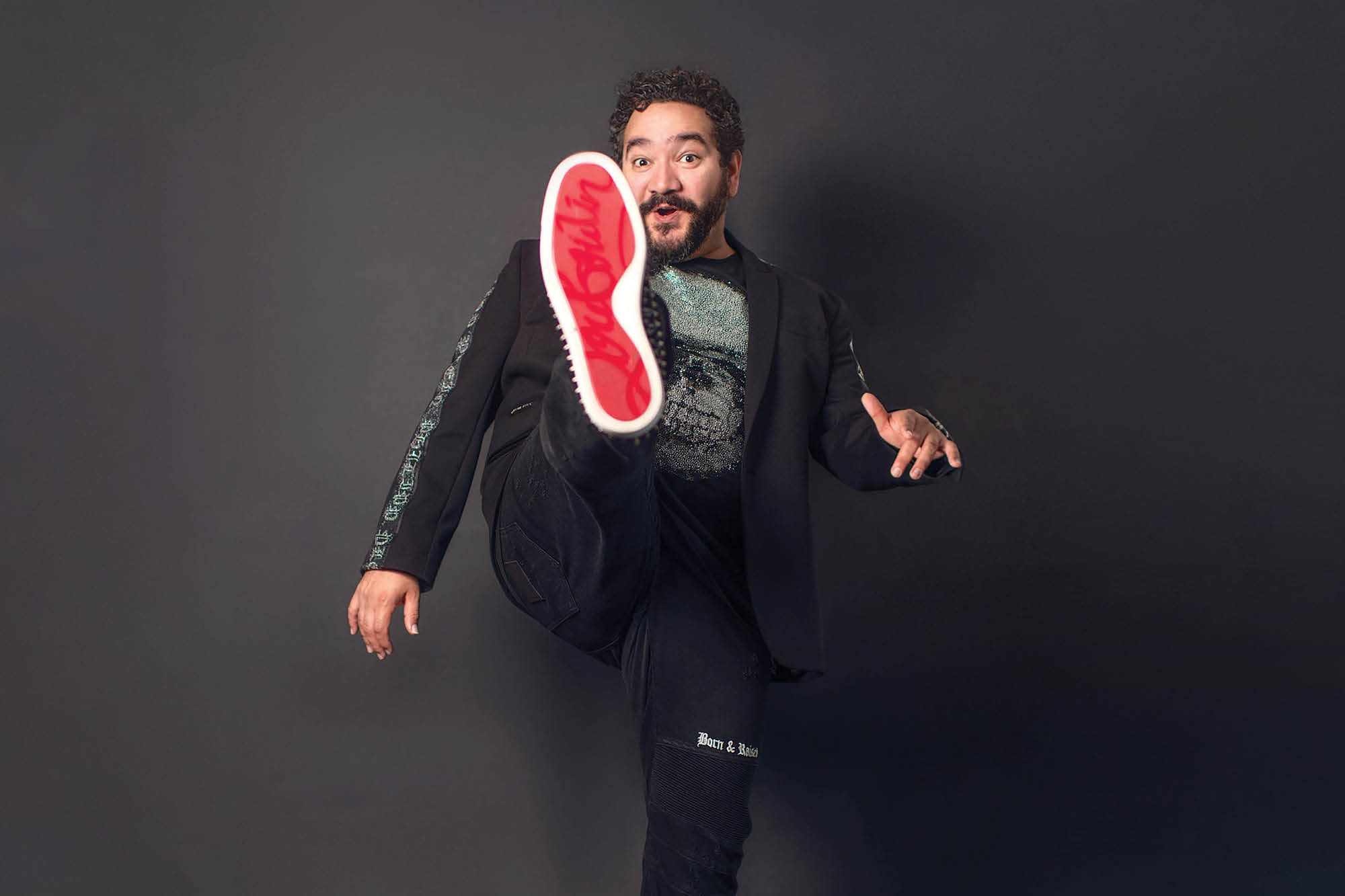 “I love to perform,” said Barbera. “I tend to be a performative person. If I get the attention of a room, I will relish it!”

Indeed, Barbera has found traveling “the hardest part of the business — everything that comes beforehand and being away all the time,” he said. “It’s exhausting. You’re always in a new bed, too few pillows. The mental load of speaking another language can be pretty tiring. You don’t have the things that make you feel at home.” He manages to unwind, he said, by indulging in one of his nonmusical passions: video games, with his Oculus Quest 2.

In the meantime, he continues to sing internationally — and work with Marilyn Taylor. “I’ve been studying with Dr. Taylor now for nearly 18 years,” he notes. “She’s wonderful to work with — doesn’t let me get away with much, and keeps me honest. She cares so much about our development as humans every bit as much as she cares about our vocal development.”

For her part, Taylor has traveled to see him make his debuts in Chicago and Santa Fe, at the Met and La Scala, and with the Minnesota Orchestra and The Dallas Opera, among others; Barbera flew her to Berlin for a week for preparation of a role.

What does she see as his forte? “Primarily the voice, his inherent musical instincts for it, and the experience that has helped shape him,” she said. “He’s still a natural talent. He’s open-minded; he steps outside the box. He’s very cautious and he does the work; and he’s got a very big heart and will help someone else who is having a hard time.”

She recalled going to Italy to hear him sing the role of Nemorino in Donizetti’s “L’elisir d’amore.”

“At La Scala, people were lined up outside to get his autograph,” she remembered. “He has star power.”