More than two dozen alumni, current students, and current and former faculty of UNCSA have connections to the Sundance Film Festival, one of the preeminent festivals in the world, which will be held in Park City, Utah, Jan. 19-29 with a virtual option for festivalgoers.

“For UNCSA alumni to have multiple projects premiering at Sundance and Slamdance is a badge of honor for our school,” said UNCSA School of Filmmaking Dean Deborah LaVine. “It’s a testament to the creativity of the students who study here and the caliber of the faculty who train and mentor them. In the past, we have seen alumni negotiate deals with major industry players after a screening there. And the networking opportunities are beyond compare. For some, Sundance will be the beginning of a successful trajectory for their careers.”

School of Drama alumnus Jonathan Majors (B.F.A. ’12) stars as the main character and serves as the executive producer for “Magazine Dreams,” screening in the U.S. dramatic competition category, which gives festivalgoers an initial look at new voices trailblazing in American independent film and features only 12 films. The film is about a Black amateur bodybuilder, Killian Maddox (Majors) who struggles to find human connection in an exploration of celebrity and violence. Majors also stars in “Devotion” and the upcoming “Creed III” and “Ant-Man and the Wasp: Quantumania.”

School of Filmmaking Assistant Dean of Graduate Studies Lauren Vilchik coproduced “A Little Prayer,” a film written and directed by UNCSA alumnus Angus MacLachlan (H.S. Visual Arts ’76, B.F.A. Drama ’80), which will have its world debut in the premieres category. This group of movies showcases highly anticipated films from a variety of genres. Set in the South, the film is about a man who tests the limits of patriarchal interference to protect his daughter-in-law when he discovers that his son is having an affair. 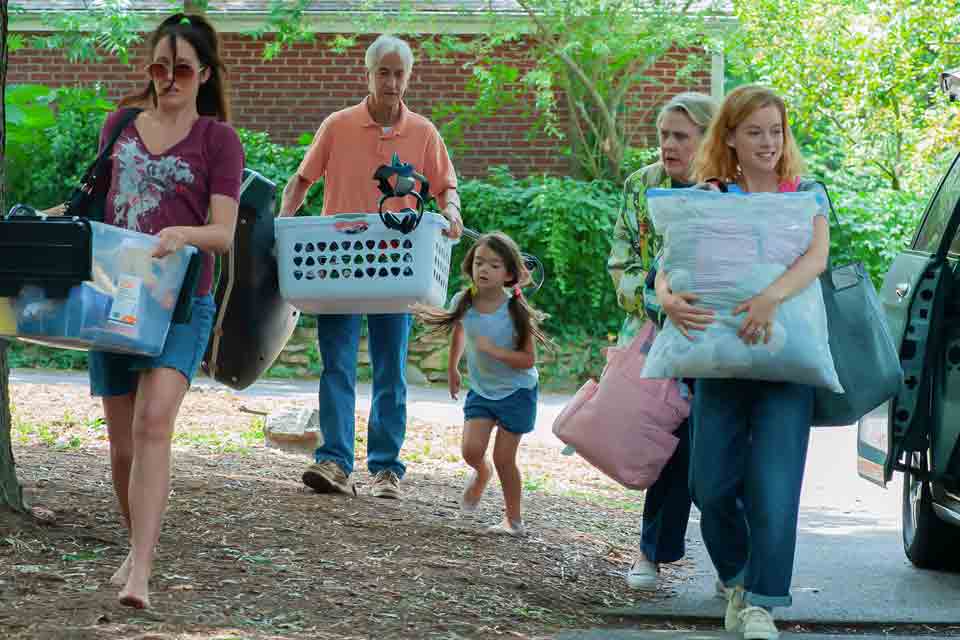 Also for “A Little Prayer,” Filmmaking faculty member Mark Messick was the foley artist, and former Filmmaking staff member Ramin Bahrani was the executive producer.  Class of 2019 producing alumnus Jon Jenkins worked on COVID-19 compliance, and School of Design and Production alumna Nic See (B.F.A. ’21) was the key hair stylist for the film.

School of Filmmaking alumnus Abraham Bengio (B.F.A. ’18) is the sales agent of "A Little Prayer." He has also packed and is selling two other projects at the festival including "Fancy Dance" and "The Starling Girl."

School of Dance alumna Liz Sargent (B.F.A. ’02) wrote and directed "Take Me Home," which is screening in the short film program. The film is about how a cognitively disabled woman and her estranged sister must learn to communicate in order to move forward after their mother’s death. 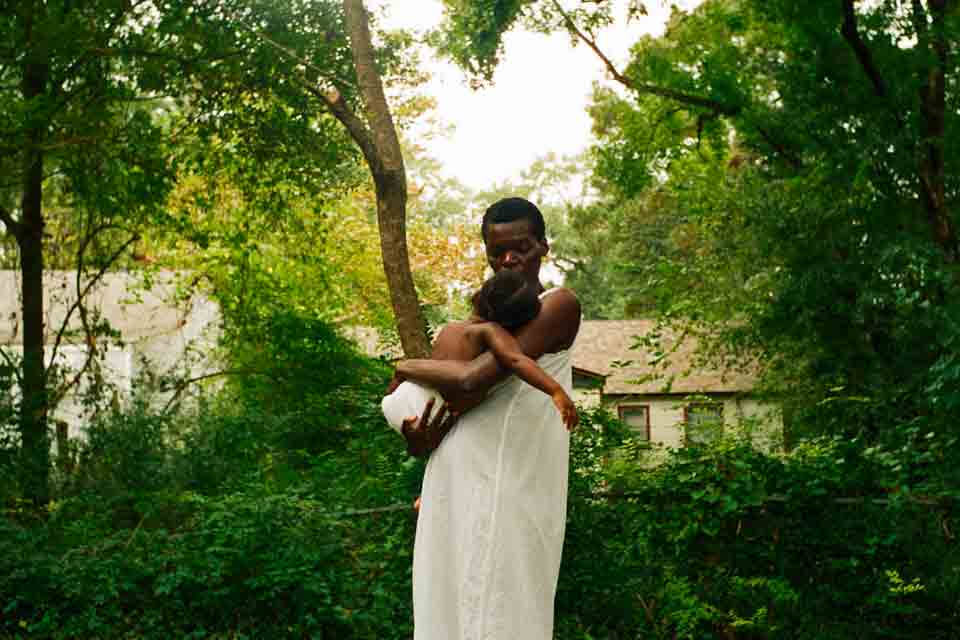 School of Filmmaking alumnus Alex Bickel (B.F.A. ’04) is the colorist on “All Dirt Roads Taste of Salt,” which is screening in the U.S. dramatic competition category. The film is a decades-spanning exploration of a woman’s life in Mississippi and an ode to the generations of people, places and ineffable moments that shape them.

School of Design and Production alumna Tayler Winer (B.F.A. ’18) is the key makeup artist on “Theater Camp,” which is also screening in the U.S. dramatic competition category. The film is about the beloved founder of a run-down theater camp in upstate New York who falls into a coma and the eccentric staff who must band together with the founder's son to keep the camp afloat. 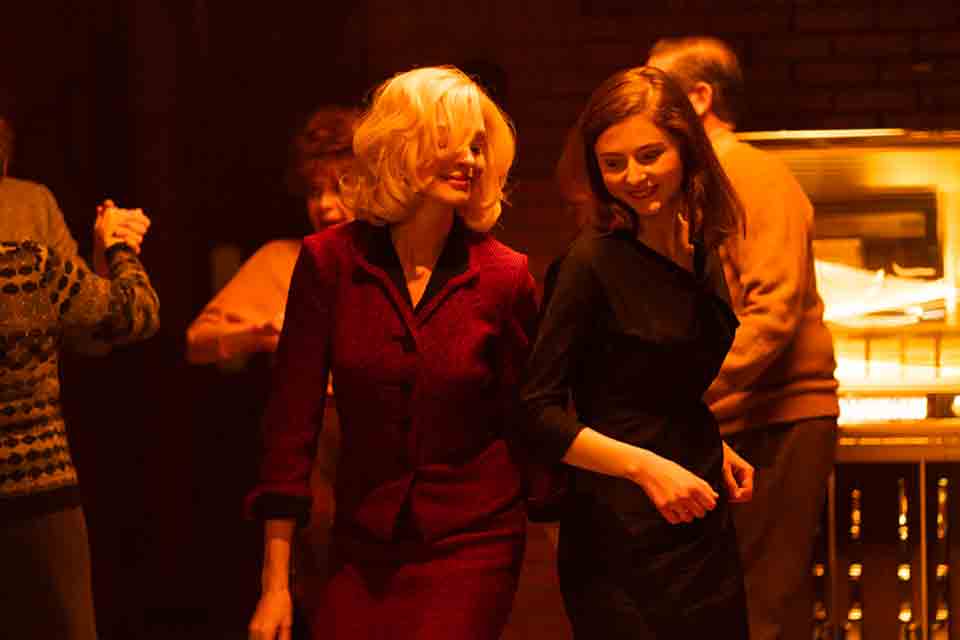 School of Design and Production alumna Ashley Rae Callahan (B.F.A. ’12) is the hair stylist for “Eileen,” which is having its world debut in the premieres category. The film, based on Ottessa Moshfegh’s award-winning novel, is set during a bitter 1964 Massachusetts winter when young secretary Eileen becomes enchanted by the glamorous new counselor at the prison where she works and follows their budding friendship when it takes a twisted turn. 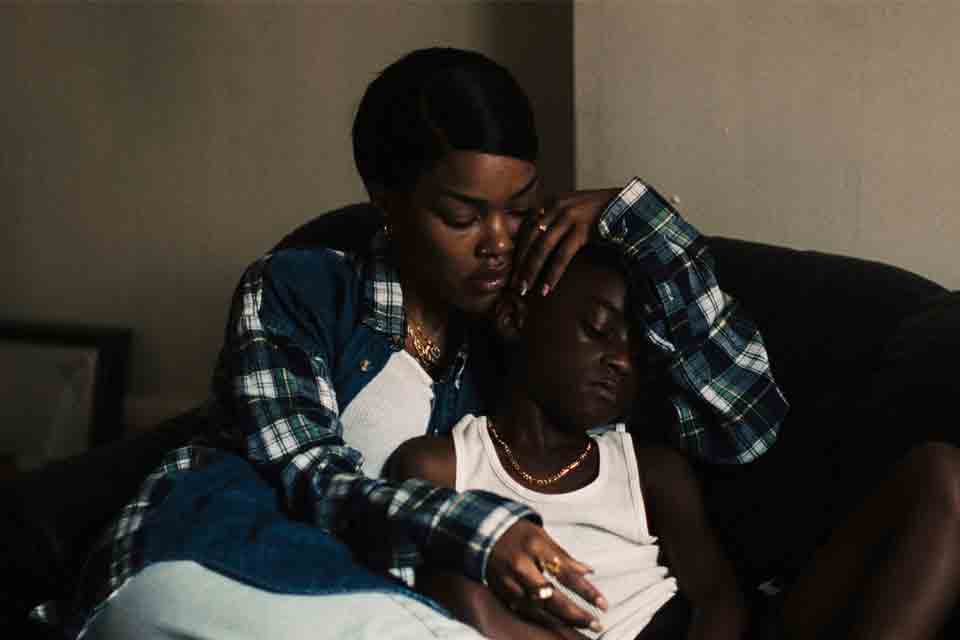 "A Thousand and One"/ Sundance Institute

School of Design and Production alumna Elizabeth Distante (B.F.A. ’17) was the scenic charge and alumna Rachel L. Miller (B.F.A. ’19) served as the scenic artist and foreman on “A Thousand and One,” which is premiering in the U.S. dramatic competition category. The film is about the audacious and free-spirited Ines, who is convinced the necessary crime on the path to redemption is to kidnap 6year-old Terry from the foster care system.

School of Filmmaking alumna Victoria Rupert (B.F.A. ’17) is the additional assistant director on “Landscape with Invisible Hand,” which debuts in the premieres category. The film is about aliens who take over the earth and control the economy when a pair of teenagers come up with a plan to save their families.

School of Drama alumnus Isaac Powell (B.F.A. ’17) is a cast member of “Cat Person,” which debuts in the premieres category. The film is about a college student who meets an older man at the movie theater where she works and after connecting through texts, their perceptions of each other collide and subsequent events spiral out of control.

School of Filmmaking alumna Roxanna Lynne Peykamian (B.F.A. ’19) is the lead assistant editor on “Victim/Suspect,” which premieres in the U.S. documentary competition category. The documentary follows investigative journalist Rae de Leon who travels nationwide to uncover and examine a shocking pattern of young women telling police they’ve been sexually assaulted; but instead of finding justice, they’re charged with the crime of making a false report, arrested, and even imprisoned by the systems they believed would protect them.

School of Filmmaking alum Grant Conversano (B.F.A. ’18) is the postproduction assistant and alumna Andi Ralph (B.F.A. ’19)  is the assistant editor on “Cassandro,” which will debut in the premieres category. The film is about a gay amateur wrestler who rises to international stardom and ultimately upends not just the macho wrestling world, but his own life. 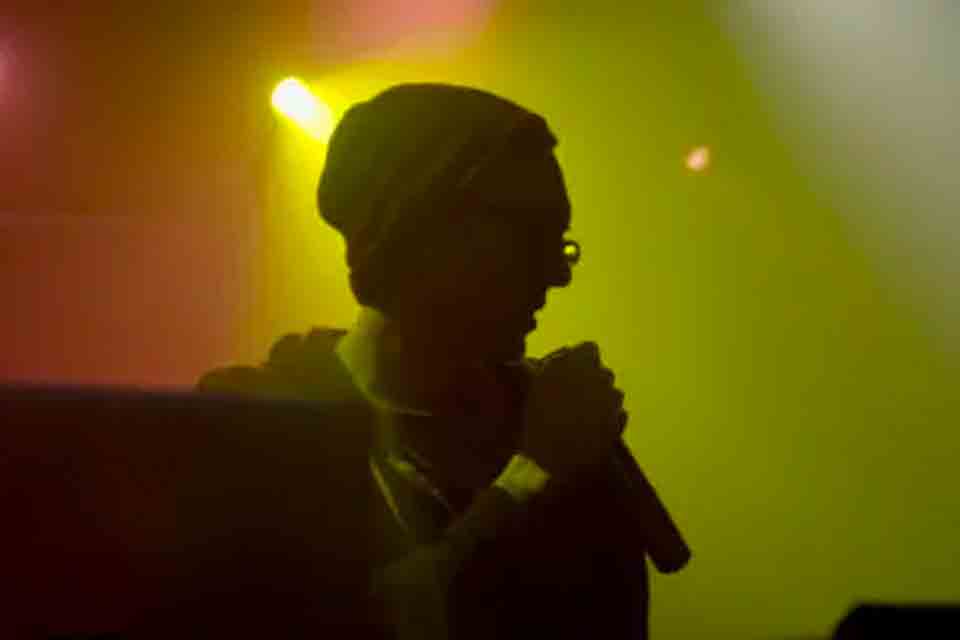 School of Filmmaking alumna Rebecca Walters (B.F.A. ’20) is working as a festival agent for the Sundance Institute this year.

About the Sundance Film Festival

The Sundance Film Festival is an annual film festival organized by the Sundance Institute. Since 1985, hundreds of films launched at the festival have gained critical recognition and reached worldwide audiences eager for fresh perspectives and new voices.

The institute is an internationally recognized resource for thousands of artists who seek to foster independence, risk-taking, and new voices in America. With its festival and artistic development programs, the institute seeks to advance the impact of independent storytelling throughout the world.

About the Slamdance Film Festival

Slamdance is a community, an experience and a statement. Established by an independent group of filmmakers who wanted to showcase the unfiltered voice of independent artists, Slamdance is an ongoing experiment that has proven, year after year, when it comes to recognizing talent and launching careers, the independent and grassroots film communities can thrive on their own.