Dance alumnus Andrew Harper leads rehearsal for his piece that will premiere at the 2021 Fall Dance performance. / Photo: Blake Ellis

Choreographer Andrew Harper shares the importance of being a versatile artist 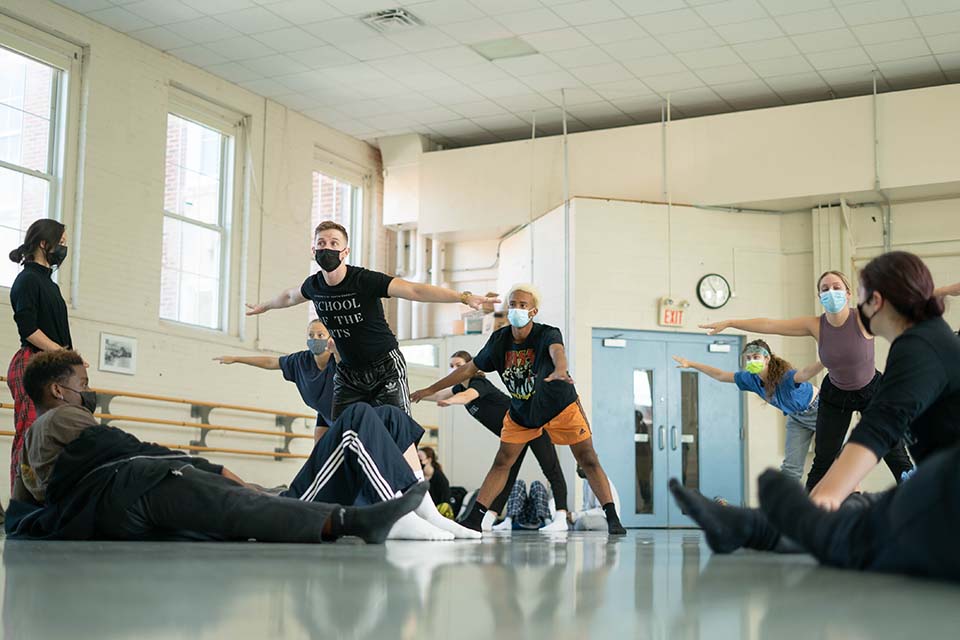 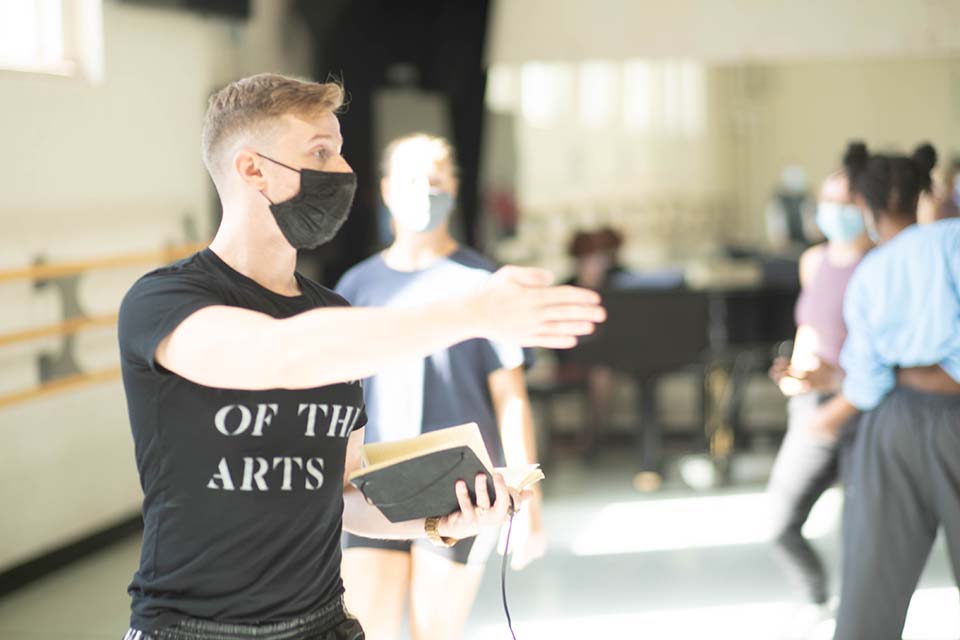 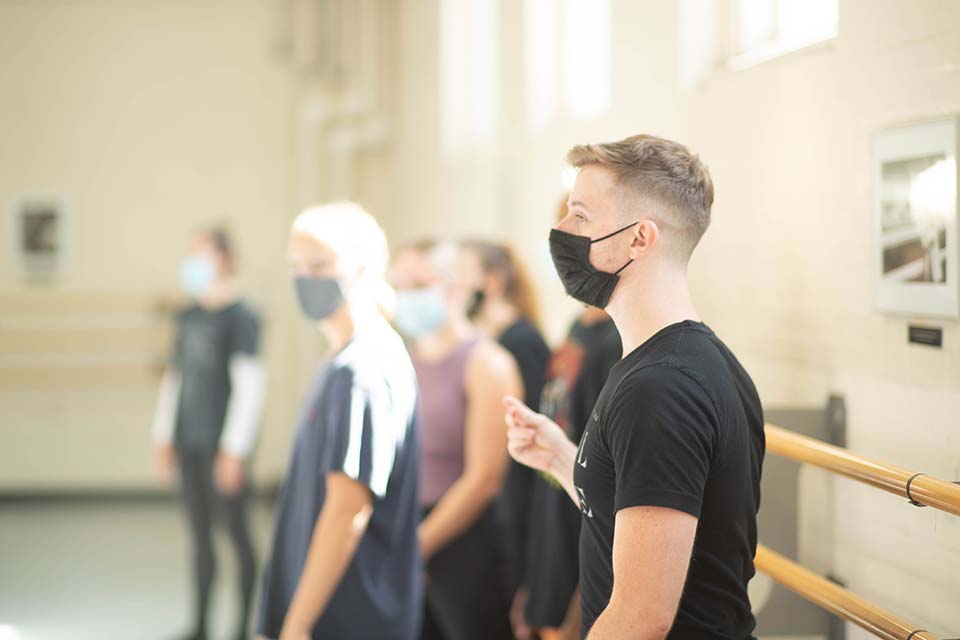 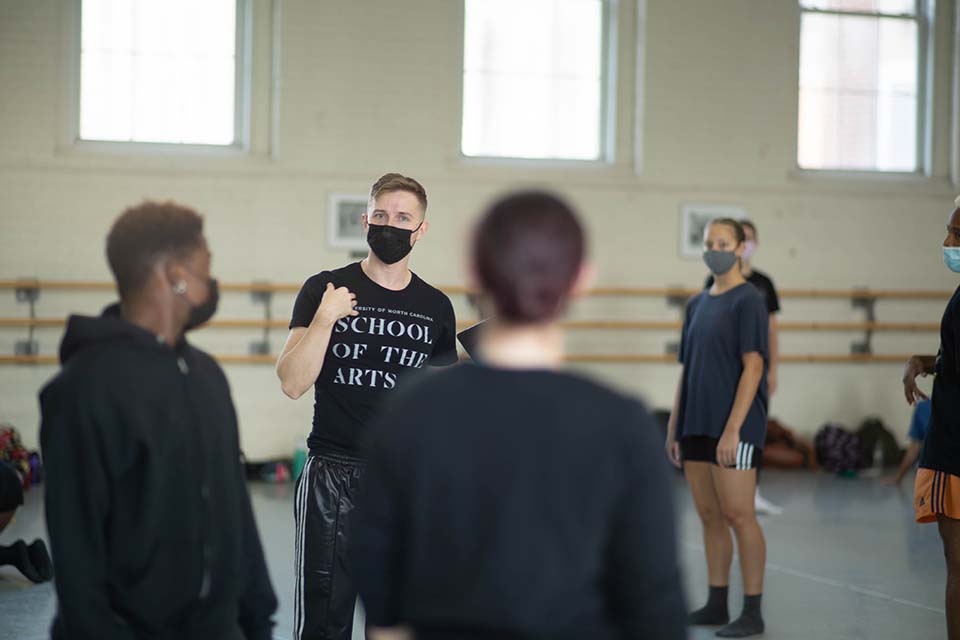 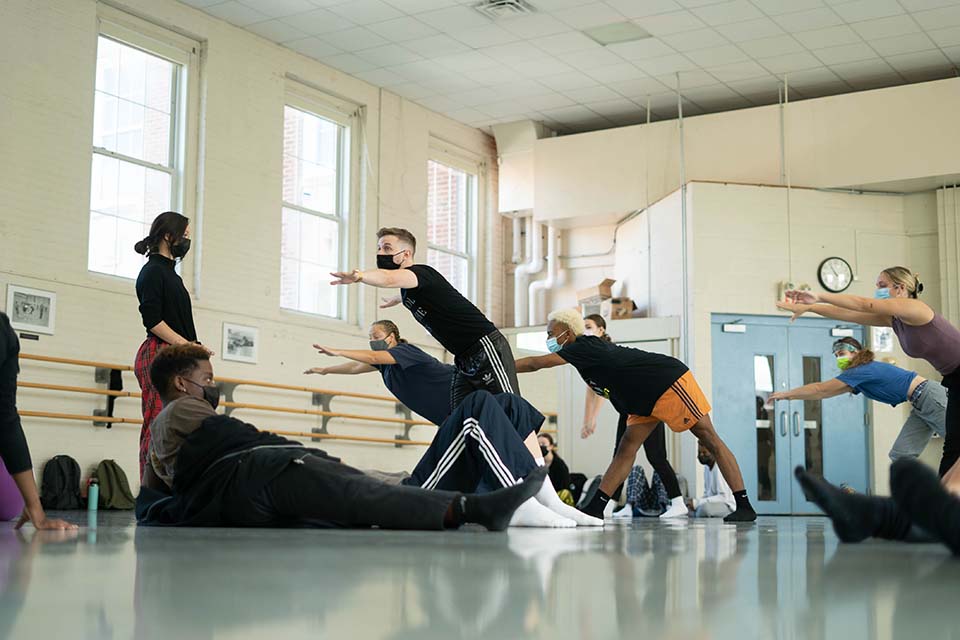 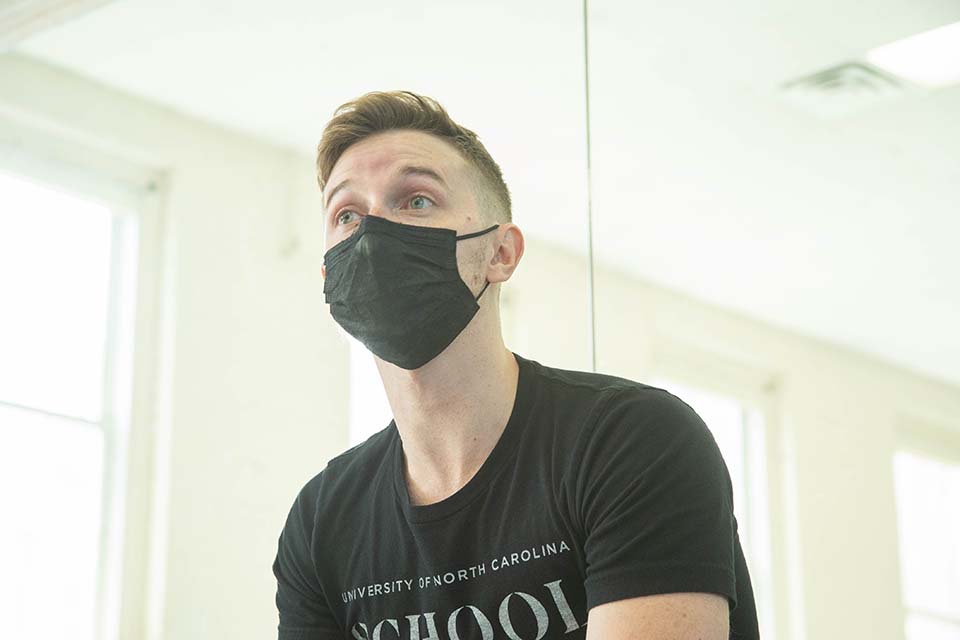 Harper, who describes his choreographic style as “robotic,” is a guest artist in the School of Dance this fall, creating a piece for the Fall Dance performance. He says that his upcoming piece is “a continuation in my study of technology-driven movement and mechanical impersonations of humanness.”

We sat down with Harper to learn more about his journey to becoming a choreographer, and what his experience was like as a student at UNCSA.

Tell us about some recent and upcoming projects.

Very recently, I worked on a project that was a collaboration between Helio Arts (a new arts media brand that is producing digital content) and the Joffrey Ballet. The project was a film called “On Lost Time,” and I was a co-creator, choreographer, editor and costume designer. It was a project I worked on mostly remotely and premiered at the end of August.

Right now, I am working on my piece for the 2021 Fall Dance performance. I have been back to campus for various reasons since I graduated and I love it because I feel like not only does the school change every time I return, but I change as well. It’s been a big moment to see my name on the rehearsal schedule and get the dedicated time with students to create this new work. It’s a quick process, but has been so exciting.

Once I leave here I will return to my new career as a realtor in Georgia and to my project of renovating my house. I have gotten to the point in my career where I prefer working on two or three bigger choreography projects throughout the year. Personally, I think the feeling of the constant need to choreograph can put a strain on an artist’s creativity, leading to a loss in the “magic” of it all.

What are some challenges that you have encountered in your career, and how have you overcome them?

I think with my choreographic career, one of my biggest challenges is that it takes time to both build credit in the industry and solidify your “brand” as a choreographer. After graduation I was fully ready to go out and start my choreographic career and try to get as many opportunities and residencies as possible. But it took probably about five years for me to solidify the different types of experiences and movement that I was interested in. I feel like even now after I’ve had so many wonderful choreographic experiences, I’m still learning and honing in on my style and my brand.

Additionally, as a student your only focus is dancing — and possibly choreographing, if you get the opportunity. After graduation, I had to learn that while I was pursuing professional opportunities I also had to make money. I had to learn how to be versatile and figure out how to use my skill set in different ways. During the pandemic, for example, I sold clothes and art that I was making. Versatility is your best friend as an artist, and the more open you can be to different opportunities that come your way will give your career some very necessary longevity.

Versatility is your best friend as an artist, and the more open you can be to different opportunities that come your way will give your career some very necessary longevity.

What have been the most significant moments in your career so far?

One of the earliest moments I can think of was receiving the Kenan Fellowship at Lincoln Center Education, run in collaboration with the Kenan Institute. This experience was so important to the start of my career, and it gave me a direction for after graduation. My fellowship led to some residencies and eventually a self produced show in New York City.

I have also been creating work for camera since 2017, and collaborated on a film that went to the ADF Movies by Movers Festival. Getting that kind of institutional recognition was very validating because that film was very personal and I was very proud of my work. Additionally, being a participant in the 2019 UNCSA Choreographic Institute Development Residency was a great career moment for me. The level of support that we received from the school and the level of interaction with the other choreographers that were here was fantastic and it felt very special to be back on campus in that capacity.

Tell us about your journey to dance and why you chose UNCSA.

I am originally from eastern North Carolina and was first introduced to dance through my sister, who got involved in dancing when she was really young. I would go to watch her classes and shows, and I remember how much I loved watching the creative process, especially when they would start to put together choreography for their recital performances. I started dancing as well when I was seven years old. Though I enjoyed dancing, it was really the creative process that I enjoyed the most — although I didn’t realize it at the time. Throughout middle and high school, I pursued several different art forms including drawing, design and piano — the latter of which led me to my first experience with UNCSA, when I attended a piano workshop in the eighth grade. I later toured UNCSA as a potential applicant for the School of Design and Production.

When it came down to making some decisions about where I wanted to go to college, I thought that since I had been dancing for most of my life and had recently discovered a passion for choreography that the School of Dance felt like the best fit for my future. It was a hard decision to make because there is no clear cut educational or career path for a choreographer, so it was a bit of a daunting prospect. I was accepted into the Classical Ballet program and chose to go for at least one year to see how much I liked it. I ended up staying for all four years because it was such a wonderful experience. 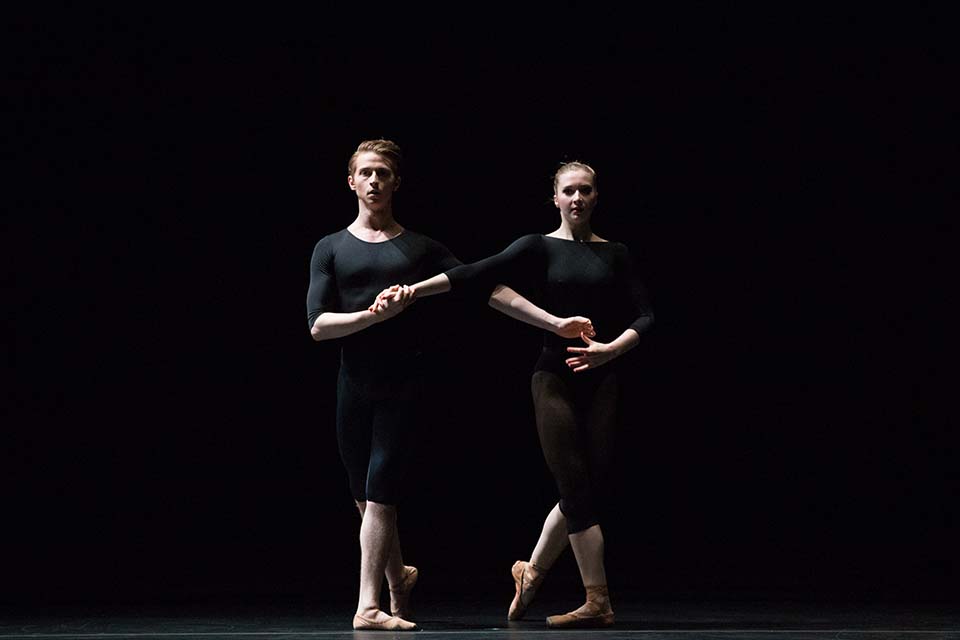 Alumnus Andrew Harper (left) lists Winter Dance 2013 as one of his favorite performances during his time at UNCSA. / Photo: Rosalie O'Connor

It was extremely challenging. Though I had participated in a few summer intensives before going to UNCSA, I had never been around that level of technique and excellence before. At first, it was a little overwhelming and definitely took some time to adjust. At the time there weren’t a lot of choreographic opportunities for ballet students and since I knew it was something I wanted to pursue, I was given a lot of leeway from the faculty to make works outside of the curriculum. Those additional choreographic experiences were a big part of my time here and I am very grateful for them.

How do you think UNCSA prepared you for your career?

Rather than some other major dance schools that bring in people that are already great dancers, polish them up and get them a job, I believe that UNCSA takes chances on people. The School of Dance looks for both potential and passion in each student and gives them the tools and training that make them into great dancers that are also great artists. I see myself as one of those people that didn’t have the most amazing technique and readiness when I first started, but I was able to develop those parts of my dancing during my time as a student.

In my last year, I received some pretty big performance opportunities, which prepared me to deal with a high level of pressure and focus. Additionally, during my first three years I encountered rejection, which was so important in preparing me for the real world. Because of that rejection, whenever I encounter it in my career I think of ways to pivot or do something differently instead of getting discouraged and thinking that a “no” is the end of the road. I learned that rejection is not a reflection of my self worth, rather an indication that something isn’t a right fit at that time.

I learned that rejection is not a reflection of my self worth, rather an indication that something isn’t a right fit at that time.

Did you have a particular influential faculty member during your time at UNCSA?

Brenda Daniels has really been the person that has been a mentor to me in terms of the way she interacts with students. All of the students respect her because she is so firm in her expectations while still being encouraging. During my time as a student I would constantly approach her with questions about different projects I was interested in and, since I had proven myself as a student that could handle a lot, she was willing to give me a range of opportunities. Even since I have left the school she has really been an advocate for me and for my work.