UNCSA’s inaugural Collage Concert is like nothing you’ve seen

The audience for the University of North Carolina School of the Arts’ inaugural Collage Concert will be surrounded – literally – with virtuoso performances by nearly every discipline in the School of Music, plus samples of dance, filmmaking, musical theatre and theatrical fight choreography. Musical selections range from the full UNCSA Symphony Orchestra, Jazz Ensemble and Cantata Singers to instrumental solos, duets and ensembles, with performers on stage, in the house and in the balcony of the Stevens Center.

The inaugural Collage Concert will be presented at 6:30 p.m. on Saturday, April 30, in the Stevens Center, 405 West Fourth St. in downtown Winston-Salem. Tickets range from $18 to $38 and are available at www.uncsa.edu/performances, or by calling the box office at 336-721-1945.

“The Collage Concert will be a spectacular finale of the year’s musical performances,” said Chancellor Lindsay Bierman. “We are very proud to showcase the exceptional talents of our students in this one-of-a-kind concert experience helmed by our extraordinary young maestro, Christopher James Lees.”

Lees, music director of the UNCSA Symphony Orchestra, said the beauty of the Collage Concert is that the program is exceedingly varied and the presentation is very fast-paced between short pieces. “The Collage Concert is a breathtaking display of talent in a rollicking, non-stop performance,” he said.

Imagine yourself inside a kaleidoscope, surrounded on all sides by vivid, colorful shards in dynamic configurations of shape through transparent windows of light. These shards, laid beside each other, illuminate a unique view of the whole picture, made possible only through their placement beside the other.

Karen Beres, interim dean of the School of Music, said the Collage Concert is something totally new for the School of the Arts. “We know that our audience will be impressed with the scope of talent showcased in the concert,” she said. “There is truly something for everyone.”

The Collage Concert will begin and end with performances by the Symphony Orchestra, conducted by Lees. “We’ll begin with a selection from the magical Scheherazade by Nikolai Rimsky-Korsakov, and will end with an excerpt from Camille Saint-Saens’ Symphony No. 3,” Lees said. 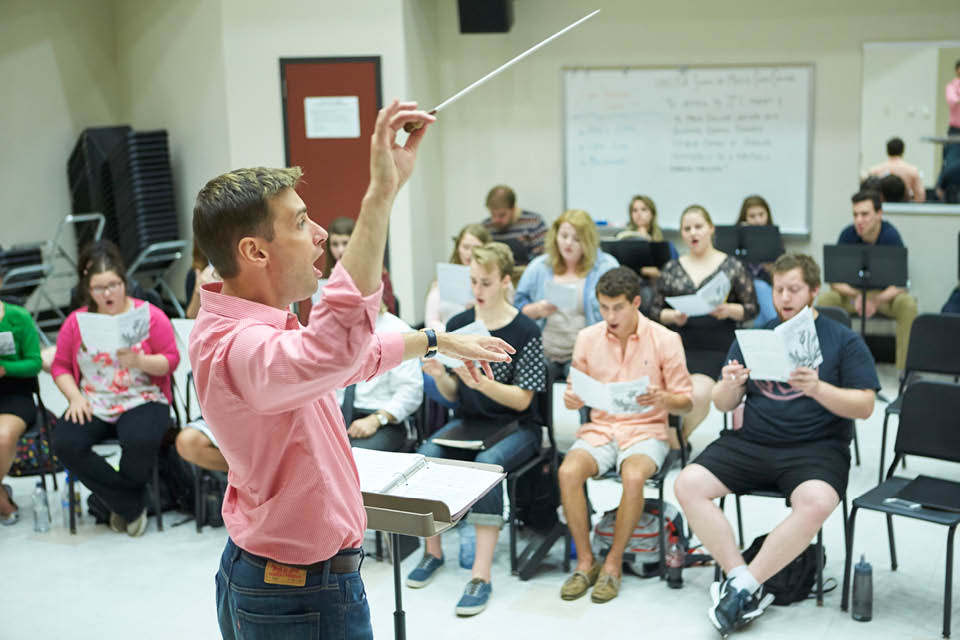 Nathan Zullinger conducts a rehearsal of the Cantata Singers

And in between, the audience will be treated to music soloists and ensembles of all varieties -- jazz, choral, percussion, saxophone, flute, oboe, piano, violin, and trumpet, to name a few, and collaborations with the schools of Dance, Drama and Filmmaking, produced with the expertise of alumni from the School of Design and Production.

“One of the things that makes UNCSA unique among arts conservatories is the range of disciplines that we teach: music, dance, drama, filmmaking, theatrical design and technical production,” Beres said. “In the School of Music, we are always interested in giving students opportunities to collaborate across disciplines. The Collage Concert is a celebration of everything we do here.”

One of the things that makes UNCSA unique among arts conservatories is the range of disciplines that we teach: music, dance, drama, filmmaking, theatrical design and technical production.

Collaborations range from an excerpt from April, a contemporary dance piece choreographed by School of Dance Associate Dean Brenda Daniels, to Wildflowers, an original composition by School of Music faculty member Kenneth Frazelle. The piece premieres at Spring Dance, April 21-24, also at the Stevens Center.

In collaboration with the School of Filmmaking, second-year student film “Another Everest” (directed and animated by Aleksandre Koskinski) will be screened, accompanied by the orchestra performing student composer Dak van Vranken’s original score.

From the School of Drama, students will perform Saki Samurai, a demonstration of theatrical fight choreography by Dale Girard, the director of Drama’s stage combat program, and “Too Late to Turn Back Now” from the Broadway musical Bonnie & Clyde, performed by student vocalists with Drama faculty member Greg Walter accompanying on piano.

Additional highlights of the Collage Concert will include:

Design & Production alumnus John Horsman, who received a B.F.A. in stage management and an M.F.A. in performing arts management, is production manager and stage manager for the concert, and 2015 graduate Maria Wurttele is sound designer.

As the year’s featured performance, the Collage Concert will be followed by NextNow, the school’s annual benefit gala for student scholarships. Attendees will meet student artists in an “inside the kaleidoscope” event with surprise performances, heavy hors d'oeuvres and an open bar. Tickets begin at $175 and are available in limited number until Friday, April 22. Tickets for the NextNow gala are available at NextNow@uncsa.edu, or by calling the Advancement Office at 336-770-3332.