Office with a view: The Santa Fe sunset was a backdrop for the summer opera performances.
Home > News & Features > Sunsets and Santa Fe stages set the scene for summer success

The sunsets are worth mentioning, according to Brenna Skinnon – a fourth-year student in UNCSA School of Design & Production’s Stage Management program. Skinnon, who spent the summer interning with the Santa Fe Opera, found inspiration in the beautiful American southwest… and in the artists she worked alongside.

“I spent every day, all day, outside. It was amazing. We had stunning sunsets that were incorporated into our shows as a light cue. Those sunsets give North Carolina a run for its money!”

Santa Fe Opera’s open-air Crosby Theatre is famous, with a panoramic view of the Jemez mountains to the west and the Sangre de Cristo mountains to the east. From July 1 to August 27, patrons pack the 2,128 seats and 106-person standing section to see five operas during the summer season. This year’s lineup included The Golden Girls of the West, Don Giovanni, Roméo et Juliette, Capriccio and Vanessa.

What was Skinnon’s role as a member of the Properties Run Crew?

“Pretty much I picked up really heavy things and I put them down,” she says, laughing. “Just kidding. That’s a joke.”

“My job was very similar to that of a Props Assistant Stage Manager. I set up props, furniture and whatever additional set pieces were needed for that day’s rehearsal.”

The job required serious attention to organization, keeping track of props as they were moved from rehearsal to stage for each show. During performances, Skinnon handed off props, ensuring they were ready before the audience saw them. 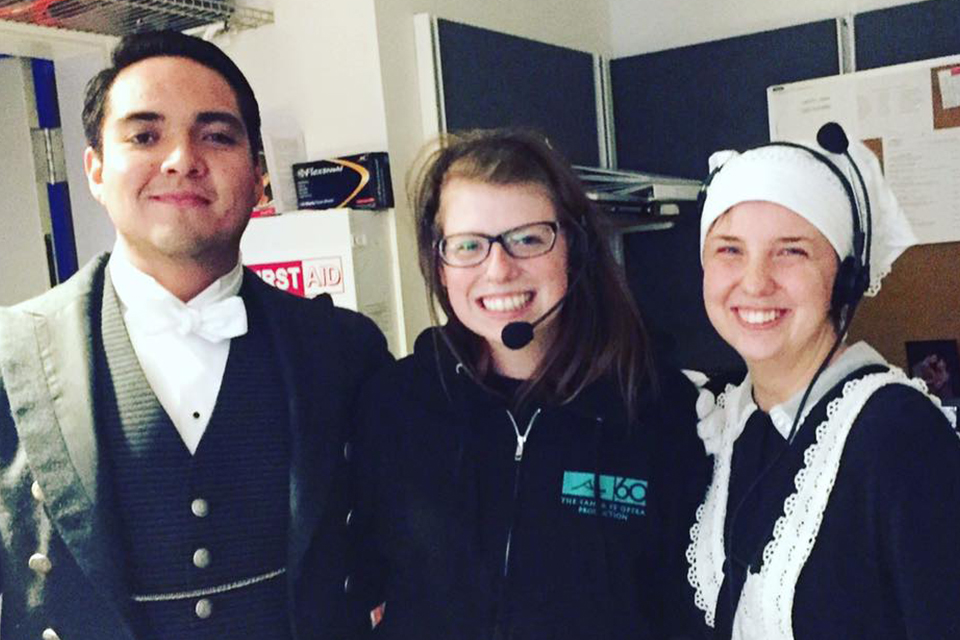 Working alongside passionate artists (including nearly 20 UNCSA students and alumni) made the long days worth it. “It was always just a good time,” Skinnon insists. “They may have worked a 12 hour shift the night before with a four hour turn around, but there were still smiles on everyone’s faces.”

The long days were reminiscent of school.

“I think UNCSA as a whole prepared me for this job. I worked crazy hours with the same people I was living with, which is similar to school,” she says. “My stage management training prepared me for Props Run Crew.”

In her rare free time, Skinnon explored Santa Fe… eating somewhere local, driving up nearby mountains to watch the sun set and embarking on Pokémon Go hunts with a group of friends.

Skinnon, who was encouraged to apply for Santa Fe Opera by Costume Technology faculty member Pam Knourek, interviewed for the position during the School of Design & Production’s annual job fair in February.

It’s an experience she hasn’t taken for granted.

“Working for Santa Fe Opera has taught me to always be ready for anything and to be more flexible, which I know I’ll use in my career and in my everyday life.”

Being ready for anything came in handy as summer drew to a close. After returning to North Carolina for a few days, it was back on a plane for Skinnon … this time, to Las Vegas. She will complete a 12-week internship with Cirque du Soleil’s “Beatles LOVE!” this fall, before returning to Winston-Salem for her final semester of school.

The jury is still out on how Nevada’s sunsets will rival New Mexico’s.