This was quite a coup. It would help jumpstart a rich, internationally acclaimed career that included stints for many years as a principal artist in Germany with both Dresden Semper Opera and Stuttgart State Opera. She also performed in this season’s “Porgy and Bess” at the Metropolitan Opera.

As the 2019-20 School of Music Artist-in-Residence, Vaughn talked a lot about how she found success in an incredibly competitive line of work. Her principal message:

“It is a really wonderful thing to do, to have a career in this business,” she said. “But, it is really a job. It really is work.”

It is a really wonderful thing to do, to have a career in this business. But, it is really a job. It really is work.

What’s more: “There’s always more to learn,” she said. As evidence, she cited her preparation for an appearance later this season as the Fortune Teller in a Prokofiev’s “Fiery Angel,” which will be presented in Theater an der Wien in Vienna.

The idea that there’s always more to learn when it comes to singing opera certainly emerged in a masterclass that Vaughn led recently at UNCSA for several graduate fellows of the A.J. Fletcher Opera Institute, all of whom study with Dr. Marilyn Taylor. Each fellow sang an aria, accompanied by pianist Angela Vanstory Ward.

Vaughn didn’t coach the singers as much as she challenged them. Many of her critiques began with a series of questions. The aim, often, was to uncover the feelings and dramatic intentions that the singers might channel through their performances.

Mezzo-soprano Brennan Martinez, for example, was queried extensively after she sang “This Journey,” an aria from “Dead Man Walking,” an opera by Jake Heggie that’s based on the eponymous memoir by Sister Helen Prejean.

As Prejean sings “This Journey,” she’s driving to the infamous state penitentiary in Louisiana known as Angola and pondering the assignment she is to undertake there as the spiritual advisor to convicted murder Joseph De Rocher.

“How does Prejean feel about the prospect of working with De Rocher?” Vaughn asked. Martinez spoke of the nun’s fright and nervousness and of her uncertainty over how she could help and connect meaningfully with a man who has murdered people. Vaughn probed more deeply.

“So, she’s resigned herself to it?” Vaughn asked. “Is she excited about the assignment? Is she mad that they gave it to her? Make a decision.”

Vaughn also urged Martinez to begin the aria with what she called “a more intimate intention.”

“Take all the drama down a bit,” Vaughn said. “Put it in an intimate space of vocal production for me.”

In other instances during the masterclass, Vaughn revealed a knack for making the kind of pithy suggestion that, if heeded, could quickly take a singer’s rendition to the next level.

This became clear between baritone Lawrence Hall’s first and second attempts at “L’orage s’est calmé” from Bizet’s “The Pearl Fishers.”

“It’s a simple love song,” Vaughn told him. “Don’t work so hard. Relax and make me think you like it.” 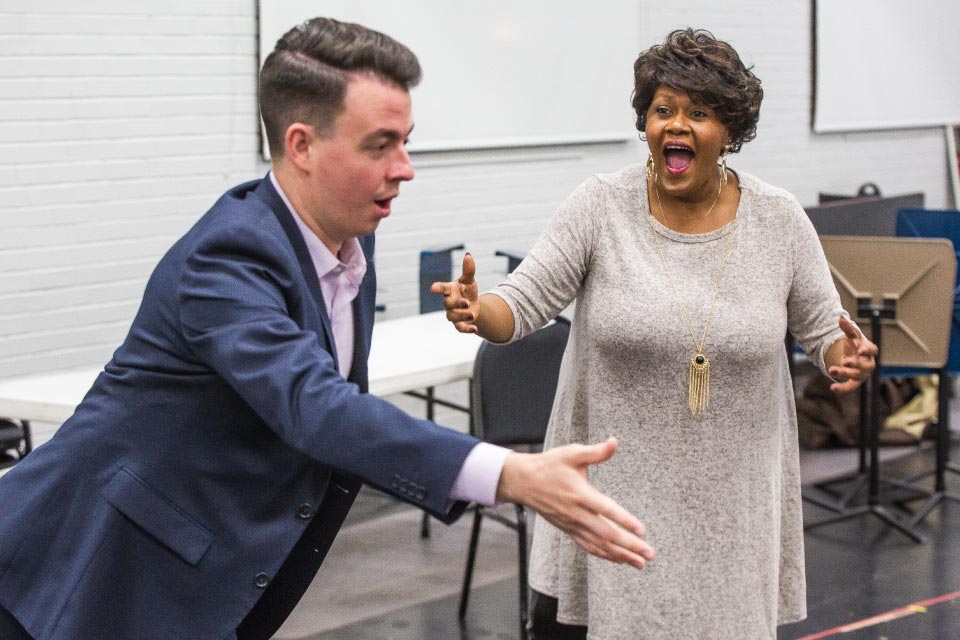 Vaughn had similar words of advice for Margaret Ann Zentner, a soprano who sang “Prendi per me sei liberto” from Donizetti’s “L’elisir d’amore.”

As opera singers and artists, our brains tend to move a million miles a minute thinking about technique and it's very easy to tense up. Tichina worked specifically with me on reactivating the body and just allowing the sound to spin out of the back of my head.

“As opera singers and artists, our brains tend to move a million miles a minute thinking about technique and it's very easy to tense up,” said Zentner. “Tichina worked specifically with me on reactivating the body and just allowing the sound to spin out of the back of my head.

“Sometimes it can be very refreshing for someone to tell you to just open your mouth, breathe and sing. She really helped me open up, not only vocally but also artistically, helping me to bring more confidence to this particular aria and to all aspects of my singing.”

In addition to strengthening the technique and artistry of UNCSA’s vocal students, Vaughn spent a good bit of time giving them career advice—something that Steve LaCosse, Fletcher’s managing director, welcomed. He called it “a rare opportunity” to “get to know someone who has sung all over the world.”

Zentner seems to have benefitted a great deal from Vaughn’s counsel.

“It was so inspiring to hear her experience and her journey from UNCSA to New York, and then to Germany,” she said. “It reminded me that everyone's path is different and that there are countless ways to get your foot in the door in this business. She is truly an inspiration and proof that if you work hard, and you really want this career, there is room for all of us.”