New York Times features Drama Class of 2020, which graduated amidst the COVID-19 shutdown

Recent alumni of the top-ranked School of Drama are the focus of an in-depth feature story by New York Times theater reporter Michael Paulson, published online Wednesday and scheduled for the upcoming Sunday print edition. “These Drama Students Trained for Years. Then Theater Vanished” describes “how one North Carolina class of 2020 made it through the launch that wasn’t — hurting, hustling and dreaming.”

The story, promoted by The Times as a daily “great read,” describes how the senior Drama class had its showcase tour – the traditional launch into the industry – cut short, its final months on campus canceled and its commencement ceremony postponed as COVID-19 began to spread across the country. UNCSA suspended in-person classes and performances in March 2020, while the Drama students were in Atlanta, the second stop on a four-city tour that would have included Los Angeles and New York City in addition to the first stop in Chicago.

“The New York Times feature highlights the resilience and resourcefulness of actors and directors in our School of Drama,” said Chancellor Brian Cole. “Those traits are not uncommon among our students and alumni from across UNCSA, like artists around the globe. We shared their disappointment and their anxiety about having their senior year curtailed in such an unexpected way.

“We also share in their excitement as the arts and entertainment industry gears up to resume live performance,” he continued. “And we will enthusiastically applaud them every step of the way as they embark on meaningful careers, and help fuel the artistic renaissance we are seeing as audiences return.”

Sam Sherman and Lance Smith celebrate at University Commencement, which included the Class of 2020 and Class of 2021. / Photo: Bryan Derbella for the New York Times

The article focuses in part on Winston-Salem native Lance Smith, who returned after a three-month stint in Los Angeles, where he found no work due to the pandemic's effect on the industry. A lifelong resident of Winston-Salem, Smith graduated from UNCSA’s high school Drama program in 2016 before being accepted into the undergraduate program. When the Class of 2020 was invited to participate in this year’s commencement ceremony, he and a classmate, Sam Sherman, decided to attend together.

The article describes how Smith has spent the past year doing daily exercises like voice warm-ups, stretching and text analysis, while also auditioning by self-tape and composing and singing R&B and hip-hop tunes at a computer in his bedroom. “I’m trying to stay ready,” he said, “so I don’t have to get ready.”

The New York Times story mentions classmates who spent time during the pandemic assisting at an animal hospital, working construction, trading cryptocurrency, doing accounting work, being a nanny, driving for GrubHub, and beginning graduate studies. It also notes early success by Ainsley Seiger of Cary, who landed the role of hacker Jet Slootmaekers on NBC’s “Law & Order: Organized Crime”; Jasper Keen, who landed a “small but memorable role” in the Netflix film “End of the Road” with Queen Latifah; Sean Stack, who was in the ensemble for an Audible production of new musical, “Row,” with the prestigious Williamstown Theater Festival; Trey Fitts, who performed in a streaming play as part of an annual new talent festival at Ars Nova, a well-regarded off-Broadway theater; and Patrick Monaghan, who booked a Butterfinger commercial. 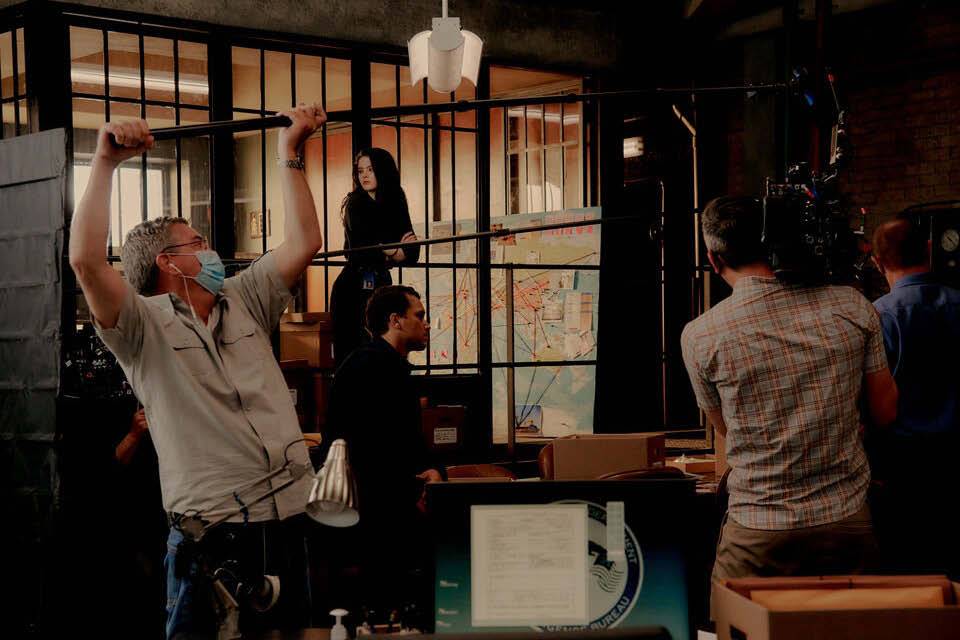 The story also describes how the artists reacted to the murder of George Floyd and the protests that followed during the summer of 2020, organizing themselves into book clubs and discussion groups to address current events as well as structural problems in the entertainment world.

The article says Sherman – back in Washington, D.C., following commencement in May – got involved with the Reclamation Project, which seeks to shape a more equitable theater world. “It’s going to take a radical reimagining, and I want to be part of that,” he commented.

The article also quotes Monaghan, who will produce two nights of theater in Red Bank, New Jersey. “I knew I wanted to do art that showcased voices that weren’t mine, of people that didn’t look like me,” he said. “So I went to an NAACP meeting, and the first thing somebody said was ‘I want to do a night of theater.’”

Reporter Paulson notes the Class of 2020 is ready to “push the reset button.” Seven of the 23 are already in New York City finding ways to pay their bills while launching careers in theater, film and television.

“I have no doubt the members of the Class of 2020 will produce art that inspires us and challenges us to be better, to do better,” said Scott Zigler, dean of the UNCSA School of Drama. “The New York Times article highlights their tenacity and passion, and soon their talent as actors, directors and content creators will be on display for all the world to see.”