An alumnus of the School of Music at UNCSA has received the prestigious Avery Fisher Career Grant. Steven Banks (H.S. ’11) of Winston-Salem is one of only five musicians selected from throughout the nation to receive the $25,000 grant and the first saxophonist ever to have been named a recipient. He and the other honorees were announced at a ceremony held at WQXR classical radio's Jerome L. Greene Performance Space in New York City. A recording of the event is available online. 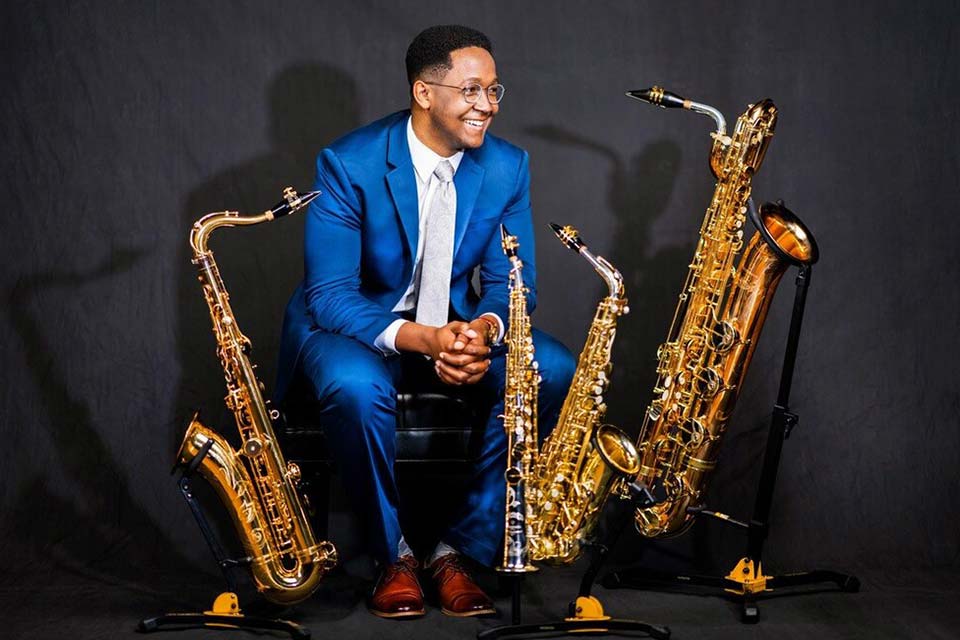 In additional accomplishments for the School of Music, two high school students have been selected to participate in the National Youth Orchestra (NYO-USA) this summer, including a concert at Carnegie Hall and European tour, and another has been selected for NYO2, for younger musicians. The free NYO programs recognize outstanding young musicians from across the U.S. chosen through a comprehensive audition process by Carnegie Hall’s Weill Music Institute.

“We are so proud of our students and alumnus for these extremely prestigious honors that speak highly of the training they received at UNCSA,” said Dean Saxton Rose. “The Avery Fisher Career Grant is a life-changing honor that allows artists to pursue their dreams, and we know that we will continue to see Steven doing great things in the future.”

He added, “Being selected for NYO is a major accomplishment for a young artist and marks them as among the finest musicians in the country. I am so proud of Elijah, Gavin and Simon, and equally proud of their superb faculty mentors whose teaching has helped propel them to success.”

The Avery Fisher Career Grants, administered by Lincoln Center for the Performing Arts, have been providing generous support to artists of exceptional potential since 1976. Grants are given to instrumentalists and chamber ensembles believed to have great potential for a major career and are to be used for career advancement and professional assistance.

More than 165 talented young musicians have been recognized with the grants over the past four decades, including Joshua Bell, Yuja Wang, Nadja Salerno-Sonnenberg, Sarah Chang, Leila Josefowicz, Alisa Weilerstein, Augustin Hadelich, and many other notable musicians.

The National Youth Orchestra musicians participate in a three-week training residency at Purchase College in New York, where they work with principal players from professional orchestras. Following the residency the orchestra will embark on a concert tour that includes performances at Carnegie Hall with conductor Daniel Harding, music and artistic director of the Swedish Radio Symphony Orchestra, and renowned cellist Alisa Weilerstein, followed by a tour of Europe that will include performances in August at the Royal Concertgebouw in Amsterdam, Berlin’s Young Euro Classic festival, and a debut at the Lucerne Festival.

UNCSA has had several students accepted to NYO programs in recent years. In 2021 trombonist Darien Baldwin was accepted into the jazz program; in 2019, Tyson Davis was apprentice composer with NYO, and bassist Isaac Present and violinist Ruth Kelley were selected for the orchestra. In 2016, sisters Emilia and Ella Sharpe were selected as violinist and bassist, respectively.

Recognized for his “deeply felt lyricism” and “expert shaping of a dramatic arc” (Cleveland Classical), Steven Banks is an ambassador for the classical saxophone. He is establishing himself as both a compelling and charismatic soloist, dedicated to showcasing the vast capabilities of the instrument, and an advocate for expanding its repertoire.

Recent highlights include John Adams' Saxophone Concerto under the direction of Peter Oundjian with the Colorado Symphony and appearing on subscription concerts with The Cleveland Orchestra at Severance Hall, performing Philip Glass’ “Façades” under the baton of John Adams. In the 2022-23 season, Banks will premiere and perform a new saxophone concerto, written for him by Grammy Award-winning pianist/composer Billy Childs, with the Kansas City Symphony, Cincinnati Symphony Orchestra, Chautauqua Institution, and the Aspen Music Festival and School.

Banks is the first saxophonist to earn a place on the Young Concert Artists roster in its 60-year history, capturing first prize at the 2019 Young Concert Artists International Auditions. Last season, his critically acclaimed recital debut was streamed from Merkin Concert Hall in New York City and co-sponsored by Washington Performing Arts, featuring world premieres by Carlos Simon, Saad Haddad, and one of Banks’ own compositions.

Banks is an advocate for diversity and inclusion in music education, performance, and newly commissioned works in the classical realm. He gave a talk at the TEDxNorthwesternU 2017 conference presenting an approach to dismantling institutionalized prejudices against women and people of color. He co-created the Learning to Listen roundtable, a discussion on the nuances of the Black experience in classical music and beyond. In partnership with the Sphinx Organization, he also co-created the Illuminate! series, which opened three essential conversations on the subject of music education, artist activism, and the LGBTQIA+ community in classical music.

Banks is assistant professor of saxophone at Ithaca College and previously served on faculty at the Baldwin Wallace Conservatory. He earned a master’s degree from Northwestern’s Bienen School of Music. He also holds a bachelor’s degree from the Indiana University Jacobs School of Music. He recently returned to UNCSA to perform and present a lecture in the Citizen Artist Lecture Series presented by High School Academics.

Elijah Barclift is a high school junior at UNCSA. He was recently named the 2021 North Carolina Representative for the Music Teachers National Association's Senior Brass Competition, the Northeast Horn Workshop High School Solo Competition Winner, and the Northwest Horn Workshop High School Low Horn Excerpt Winner and Solo Competition runner-up. As a young freelancer, he has recently performed with the Raleigh Symphony Orchestra. Barclift was the principal horn of the North Carolina All-State Honors Band in the seventh, eighth, and ninth grades. His parents are band directors and were his first music teachers. Before enrolling at UNCSA, he studied with Mary Burroughs and Maria Serkin. 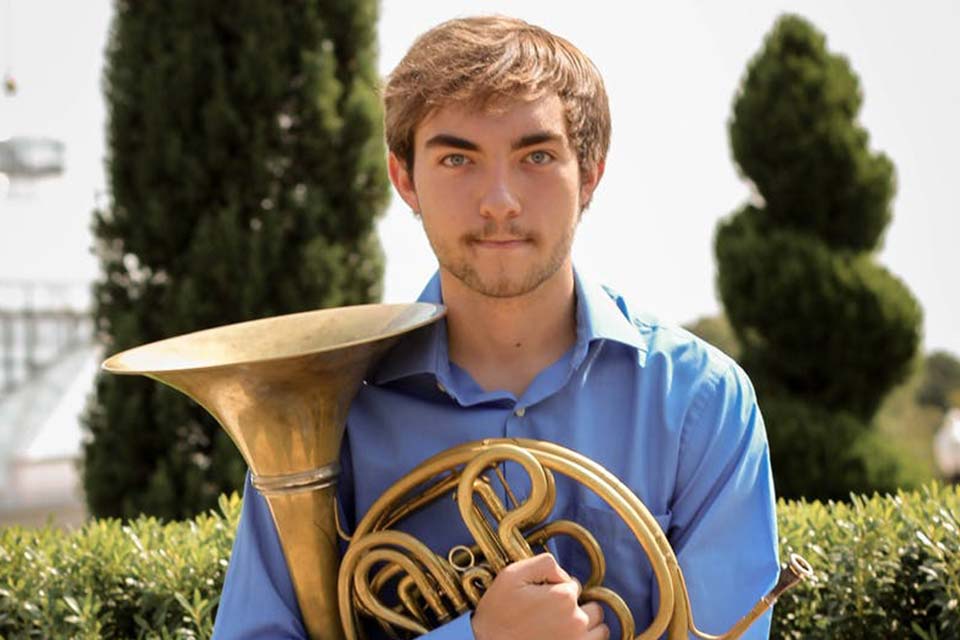 Gavin Hardy is a high school sophomore who began playing the double bass at the age of 12. During middle school, he was first chair of the Forsyth County “All County” Orchestra for two years straight. In the eighth grade, after playing the national anthem on the double bass before a basketball game he was playing in, Hardy was connected to Paul Sharpe when the video went viral. He was selected for NYO2 in 2021 and was one of 10 finalists from around the world (including Turkey, Ecuador, Hungary and the United States) at the International Society of Bassists Solo Competition 2021 (15-18 division). 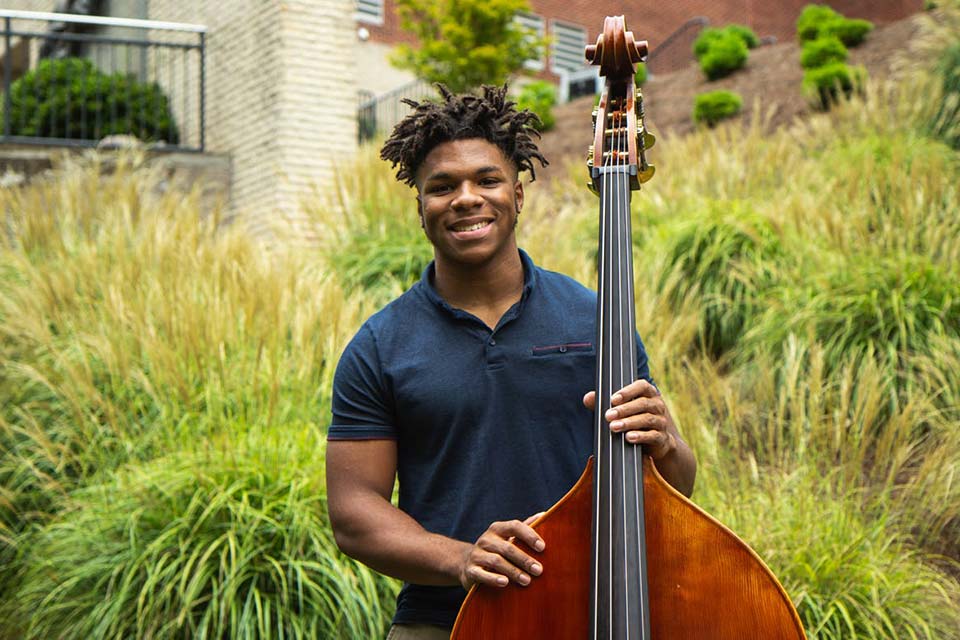 Simon Vazquez-Carr is a high school sophomore who has been playing the bass for four years. After playing bass in the Kennebec Valley Youth Symphony Orchestra in Maine, he came to UNCSA when his family moved to Durham and has been studying with Paul Sharpe since his freshman year. He currently plays with the UNCSA Symphony Orchestra as well as the High School Bass Quartet. 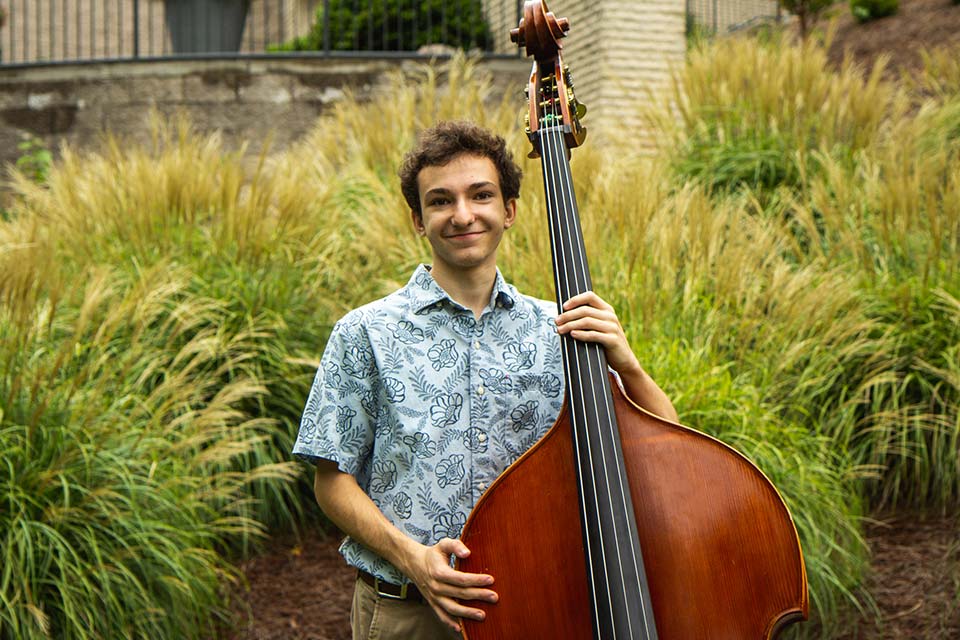