As a dancer, alumnus Anthony Santos (B.F.A. Dance '17) has come to embrace the unexpected. Santos has spent three seasons as a company dancer with the renowned and innovative ballet company Dance Theatre of Harlem, despite early expectations of becoming a contemporary dancer.

Santos is also performing as a reimagined Drosselmeyer in UNCSA's 2020 production of "The Nutcracker," and has navigated the other highs and lows of this year with grace and gratitude.

In the middle of a busy rehearsal schedule and ahead of his travels to Winston-Salem to film "The Nutcracker," he hit pause long enough to reflect on his time at UNCSA, viewing challenges as opportunities and what it means to put a fresh spin on a classic. 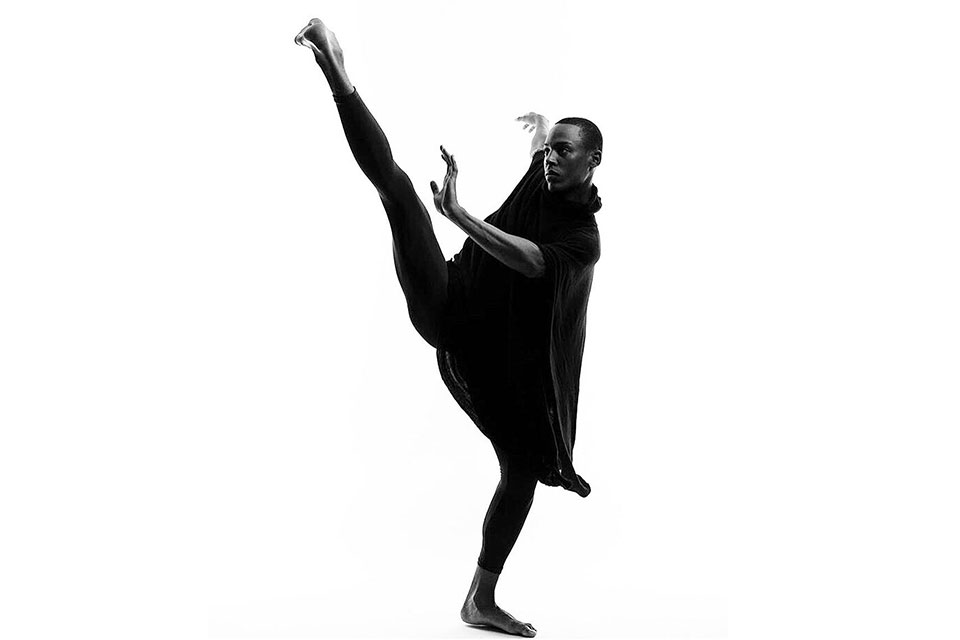 Santos began his dance career as a musical theater student in fifth grade in his hometown of New York City. When he reached high school, his focus narrowed from musical theatre to dance and he continued his education with Alvin Ailey American Dance Theatre for several years.

When it was time to choose a college, he knew he wanted to go somewhere outside of New York. "It was really important to me to branch out and experience another place," he says. He initially had his sights on the San Francisco area, but, he says, "The School of the Arts was so generous and my mom really encouraged me to go there."

It was a decision he’s glad he made. "It was a great experience," he says. "Winston-Salem has this calm environment and you really get to enjoy just doing the work. In a place like New York, there are so many distractions. At UNCSA, I could be in the studio and really focus on my dancing." 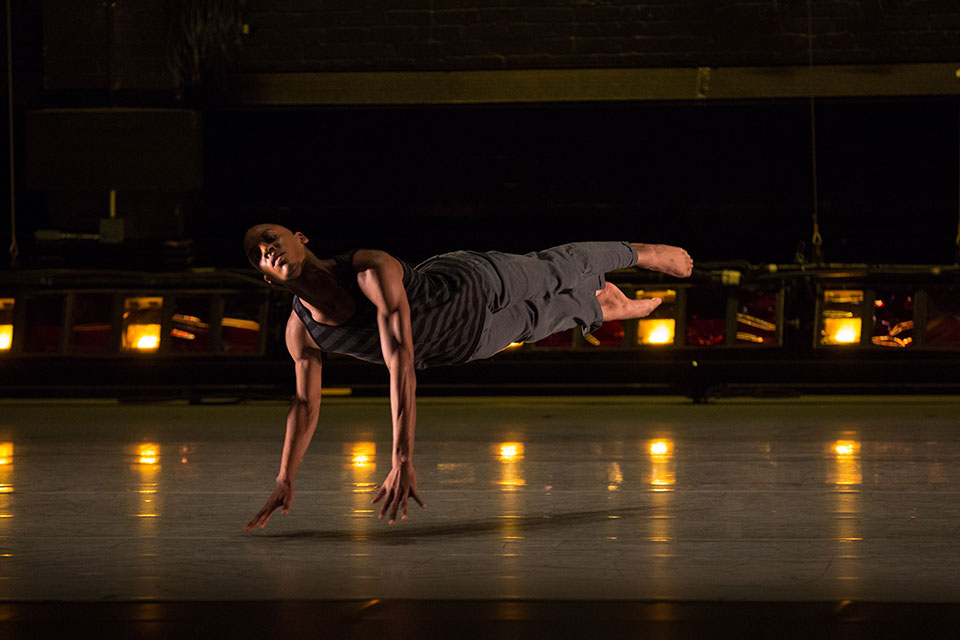 Santos in "Democracy" by Doug Varone for Winter Dance in 2016. / Photo: Rosalie O'Connor

Although he graduated in 2017 from the Contemporary program, Santos was influenced by his work with both the Contemporary and Ballet programs. He remembers performing in Winter Dance in 2016, where he danced in two ballets. "I felt really blessed to be in both at once," he recalls.

He also performed in a piece by classmate Alvarez Delgado Jones (B.F.A. Dance '16) during the annual Emerging Choreographers showcase. "I was in his senior piece and felt like the movement brought me out of my comfort zone. I always enjoy a piece that does that," Santos says.

His teachers likewise had an impact on him as an artist. "Jennet Zerbe changed my life, honestly. The way I approach ballet is because of her," Santos says. He was also influenced by Kira Blazek-Ziaii, Brenda Daniels, Misha Tchoupakov and former Dean of Dance Susan Jaffe.

The faculty at School of the Arts really care about the students and each teacher that I had has changed my life and given me so much wisdom and support.

"I could say something influential about every faculty member I've worked with," he says. "The faculty at School of the Arts really care about the students and each teacher that I had has changed my life and given me so much wisdom and support."

Balancing a love for ballet and contemporary

As a student, he found himself constantly drawn to ballet and even considered switching programs at one time. But, he recalls, "there just wasn't enough contemporary in the ballet program." As a contemporary major, he felt he was better able to balance and explore his love for both forms.

"I love ballet," he says. "I love tapping into movement that is outside of my comfort zone and things that are challenging. And classical ballet is challenging."

Still, after graduation, he says, "I was 100 percent sure I'd be in a modern company." However, when the opportunity to audition for Dance Theatre of Harlem presented itself, he couldn't turn it down.

"[Guest artist] Helen Pickett was setting a piece during my senior year," he remembers, and Pickett overheard him talking about whether or not he should attend the Dance Theatre of Harlem audition. "She so generously said she'd give me a recommendation." So, he went to the audition and was offered the position.

The idea of dancing with a ballet company hadn't exactly been part of his expectations, but "I had this opportunity to go home to New York and join this iconic company," Santos says. "It just felt like it was meant to be."

"I'm a big planner, but sometimes life doesn't go as planned," he adds. "You just have to enjoy the ride."

Being part of "The Nutcracker"

Santos was honored when he received a call from Interim Dean of Dance Jared Redick over the summer to participate in this year's reimagined production of "The Nutcracker."

"He's taught so many students," he says, "and for him to ask me to do this, that's something I don't take lightly. I'm so blessed and happy to be part of this." 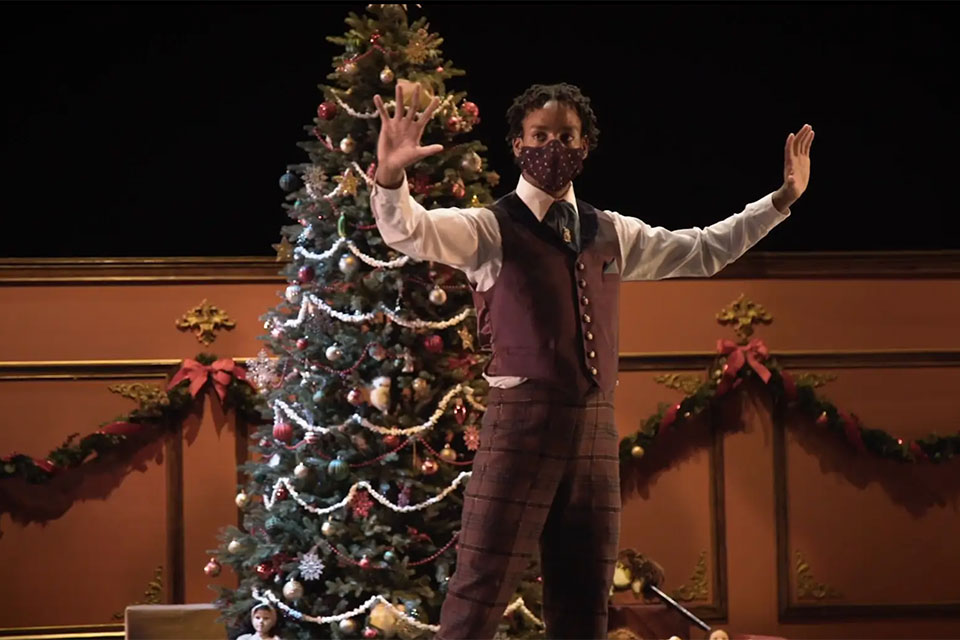 Santos on the role of Drosselmeyer in the 2020 UNCSA production of "The Nutcracker."

When Redick shared his ideas about this year's production, Santos was taken in by the excitement and possibility of a refreshed take on the classic ballet and UNCSA staple.

"Drosselmeyer is a bit of a mad genius," he adds. "I get to tap into that character and ask the question, 'Who is Drosselmeyer in 2020?' It's exciting to show people that he can be different."

For Santos, embracing those changes and different performances is part of being an artist in 2020. "I miss being on stage, but I'm grateful during these chaotic times that I've had so many opportunities come my way … it's not the same, there's nothing like dancing on stage. But it still brings joy."

In addition to his role as Drosselmeyer, Santos had the opportunity to perform at Kaatsbaan Cultural Park in Tivoli, N.Y. this year, where he was invited by former American Ballet Theatre principal dancer and UNCSA guest artist Stella Abrera. "She invited me to perform a solo," he says, "and Mikhail Baryshnikov was in the audience. I could never have imagined doing what I love doing with him in the audience. That was a highlight of 2020."

He's also made sure to cultivate other hobbies and projects. "I've done a lot of designing … I redesigned my balcony at my apartment. I think it's important to have other hobbies. I love when I speak with other dancers and we can talk about books, art, albums - what inspires them in other art forms."

As a self-proclaimed workaholic, he says, it's been important to slow down and enjoy life. "Especially now, we have to remember to be thankful," he says, "and enjoy this gift."