The costume design program at the University of North Carolina School of the Arts is among the best in the country, according to The Hollywood Reporter (THR), a leading publication of the entertainment industry. In its Feb. 14 print edition, released online Monday, THR included the UNCSA School of Design and Production’s program in its unranked list of Top 10 costume design schools.

It was Design and Production’s second national ranking this year by a leading trade publication. In September, OnStage ranked the school second in the country for undergraduate theater design and tech programs.

“I’m thrilled and honored for our faculty and students to be recognized for their extraordinary dedication to craft, mastery of design, and exquisite technical skills,” said Chancellor Lindsay Bierman. “And I’m extremely proud to see the work of our alumni on the world’s greatest stages and screens. A huge congratulations to the School of Design and Production.”

I’m thrilled and honored for our faculty and students to be recognized for their extraordinary dedication to craft, mastery of design, and exquisite technical skills."

The article noted, “More than knowing how to thread a needle, costume design involves historical research, collaboration with actors and directors, keen attention to detail, the art of narrative storytelling through clothes … and that's just the beginning. A bachelor's (B.A.) or master's in fine arts (MFA) can give a leg up.”

Design and Production (D&P) Dean Michael J. Kelley said UNCSA offers an undergraduate degree in costume design and technology (combined) and graduate degrees that specialize in either costume design or costume technology. “They are all pipelines directly to the industry, whether it’s film or television, Broadway productions or regional theater,” Kelley said. “Local audiences are lucky to see the work created by our students, and audiences the world over enjoy the work of our alumni. We’re thankful The Hollywood Reporter is helping to tell our story.”

To create its list of graduate and undergraduate programs, THR consulted with costume designers and academics, including Bill Brewer, co-director of UNCSA’s Costume Design and Technology program. The article quoted Brewer and alumnus Paul Tazewell, winner of a Tony Award for “Hamilton” and an Emmy Award for NBC’s “The Wiz: Live!” 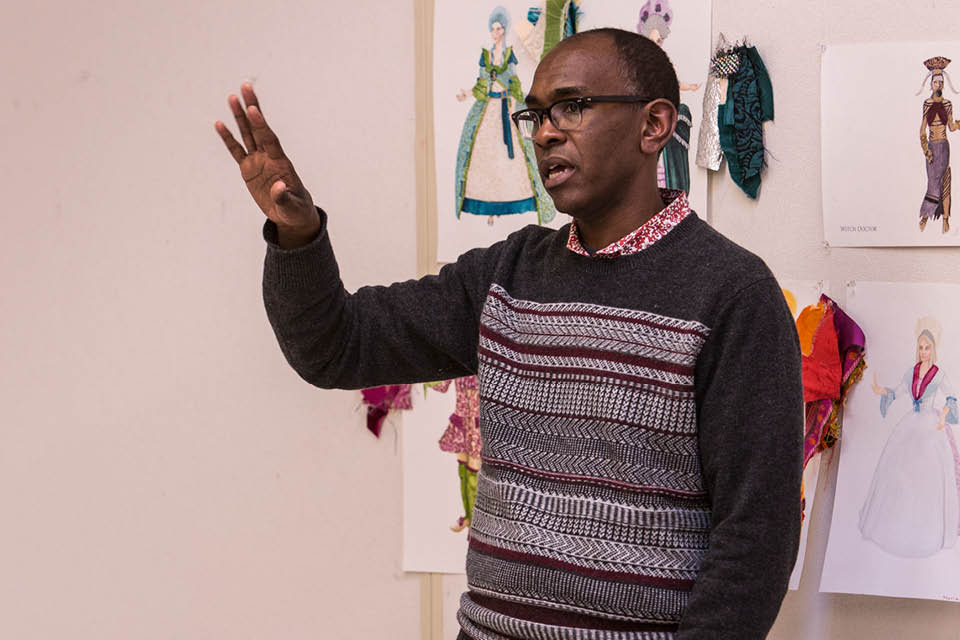 Alumnus Paul Tazewell, shown during a visit to campus in 2013, has won an Emmy Award and a Tony Award for his costume designs.

Tazewell noted the advice of a guest artist at UNCSA during his undergraduate studies. "Ann Roth gave a master class and told me that I'd better study urban clothes because street stories would be the next paradigm shift," he said. "Ms. Roth was right. Because I was, and still am, one of the few African-American costume designers, I was bombarded with work."

Roth won an Academy Award for costume design for “The English Patient.” She was nominated for three additional Oscars, for “The Hours,” “The Talented Mr. Ripley,” and “Places in the Heart.”

In the article, Brewer, who directs the program along with Pam Knourek, noted 95 percent of D&P students have a job before they graduate.