The School of Filmmaking at UNCSA has been recognized by two leading publications of the film and television industry. The Hollywood Reporter (THR) ranked the school at No. 10 on its list of 25 top film schools in America (up from No. 11 in 2021), and MovieMaker magazine included UNCSA in its list of the best film schools in the U.S. and Canada, citing the school for its “Outstanding Producer Training.”

THR noted the schools on its list “offered the best chance of navigating Hollywood’s changing terrain” and cited Dean Deborah LaVine and the newly launched Anthology Production Lab that focuses on the development of episodic series. The magazine also noted that TV writer and producer Emily Spivey (“Wine Country,” “Last Man on Earth,” “Saturday Night Live”) will teach Acting for Animators this fall. Spivey will be teaching in workshops also including Comedy Sketch. 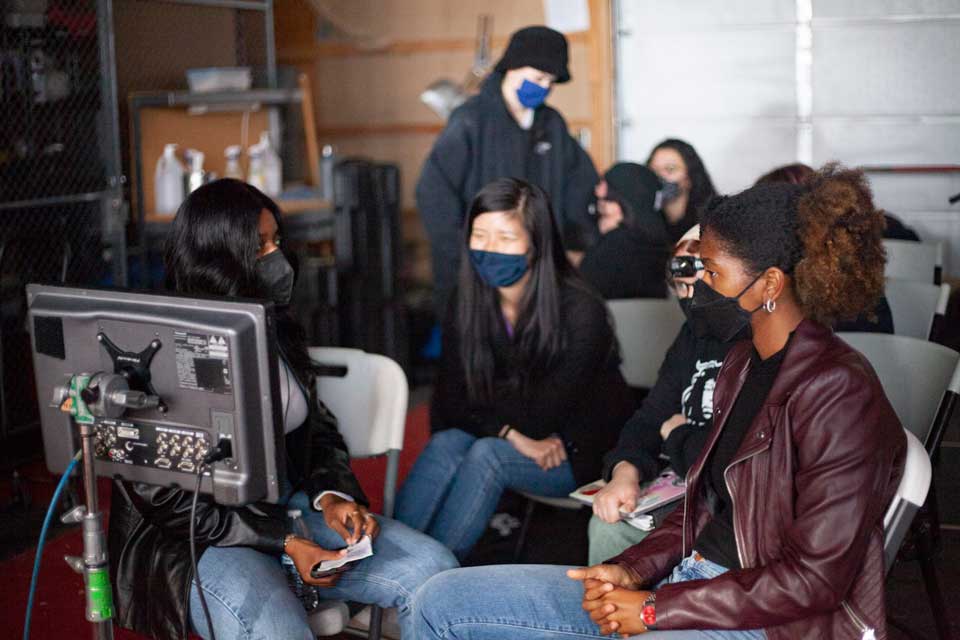 Led by Assistant Dean of Graduate Studies Lauren Vilchik, the two-year Creative Producing M.F.A. guides students in balancing artistic instincts with the demands of a rapidly changing marketplace, utilizing small class sizes and one-on-one mentoring for a personalized program that adapts to individual voices and backgrounds. The program is designed to fit the schedules of working professionals and most students can work while earning their degrees.

“I am once again thrilled to see UNCSA get the recognition it deserves from these respected industry publications,” said Dean LaVine. “I am particularly happy to see our excellent graduate programs getting noticed, as well as the diversification of our curriculum. In today’s ever-changing landscape, it is more important than ever to prepare students for a range of work — and to do so in a way that positions them stronger financially as they graduate. I am proud that UNCSA is able to finance all student thesis films and to provide world-class training from our experienced faculty at less than half of the tuition of peer programs.”

In making its annual list, THR “consults with knowledgeable industry players, considers changes schools have made year-over-year and examines the alma maters of the past year’s awards-season winners, film festival breakouts and box office stars.”

MovieMaker editors write that they have ensured their list “includes not just institutions with a proven record of educating Oscar-winning filmmakers, but also those far outside New York City and Los Angeles where you can learn filmmaking from some of the best, at reasonable costs.”

The award-winning faculty in the School of Filmmaking have decades of real-world experience and a passion for mentoring undergraduate and graduate students in concentrations that include animation, cinematography, directing, film music composition, picture editing and sound design, producing, production design and visual effects, and screenwriting.

The film school’s Media + Emerging Technology Lab (METL) is dedicated to the exploration and production of immersive storytelling content. Partnerships with the RiverRun International Film Festival in Winston-Salem and the Sundance Film Festival provide critical networking and screening opportunities, alongside annual trips to Los Angeles and New York City. Under Dean LaVine, the School of Filmmaking is connecting students to filmmakers across the globe through partnerships with RISEBA University in Riga, Latvia; IFS Köln in Cologne, Germany; and Film University Babelsberg KONRAD WOLF in Potsdam, Germany. New program offerings in episodic series and comedy sketch writing are broadening the scope of the training and making students employable across a wide spectrum of work.

Students in the School of Filmmaking make more than 130 films a year with all equipment and financing provided by the university, and tuition is less than half of other preeminent film schools. UNCSA showcases thesis films both in person and online (for a limited time), expanding the audience worldwide.