Effron, who has conducted more than 100 opera productions, conducts Richard Strauss’ hilarious and poignant exploration of art, fidelity and love. For 18 years, Effron was on the conducting staff of the New York City Opera, and has conducted the San Francisco Opera, Tulsa Opera, Greater Buffalo Opera and Opera Columbus. He was music director of the Youngstown Symphony Orchestra and the artistic director of the Central City (Colo.) Opera and the Brevard Music Center. He has taught conducting at the Curtis Institute of Music and was head of Eastman School of Music’s orchestral program for 21 years. Effron recently retired as professor of conducting at Indiana University’s Jacobs School of Music.

Soprano coloratura Labiner earned a Bachelor of Music in 2009 from UNCSA’s School of Music, where she studied with Marilyn Taylor. She earned a Master of Music from the Royal College of Music in London and trained with the Opera Works program of the English National Opera (ENO). She has performed with ENO, Piedmont Opera, and the London Grimeborn Festival, and as a concert soloist in the United States and the United Kingdom. She continues to work with Taylor via Skype lessons.

“We are thrilled to introduce local audiences to Maestro David Effron,” said Nicholas Muni, artistic director of UNCSA’s Fletcher Opera Institute. “And local opera fans no doubt remember the lyrical voice of Sarah Labiner, who performed in several opera productions when she was an undergraduate.

“The contributions of these guest artists, combined with the incredible talents of our Fletcher Opera fellows, the expert stage direction of Steven LaCosse, and the beautiful work of artists in our School of Design and Production, will create a memorable experience for our audience members,” Muni added.

As a soprano coloratura (a specialized voice that is distinguished by agile runs, leaps and trills), Labiner sings her “dream role” of Zerbinetta, a saucy comedienne who leads a burlesque group booked to perform at the home of the wealthiest man in Vienna. The host has mistakenly booked an opera company to perform the same evening, leading to a quarrel between the two companies – of wildly differing musical genres – over who will perform first. 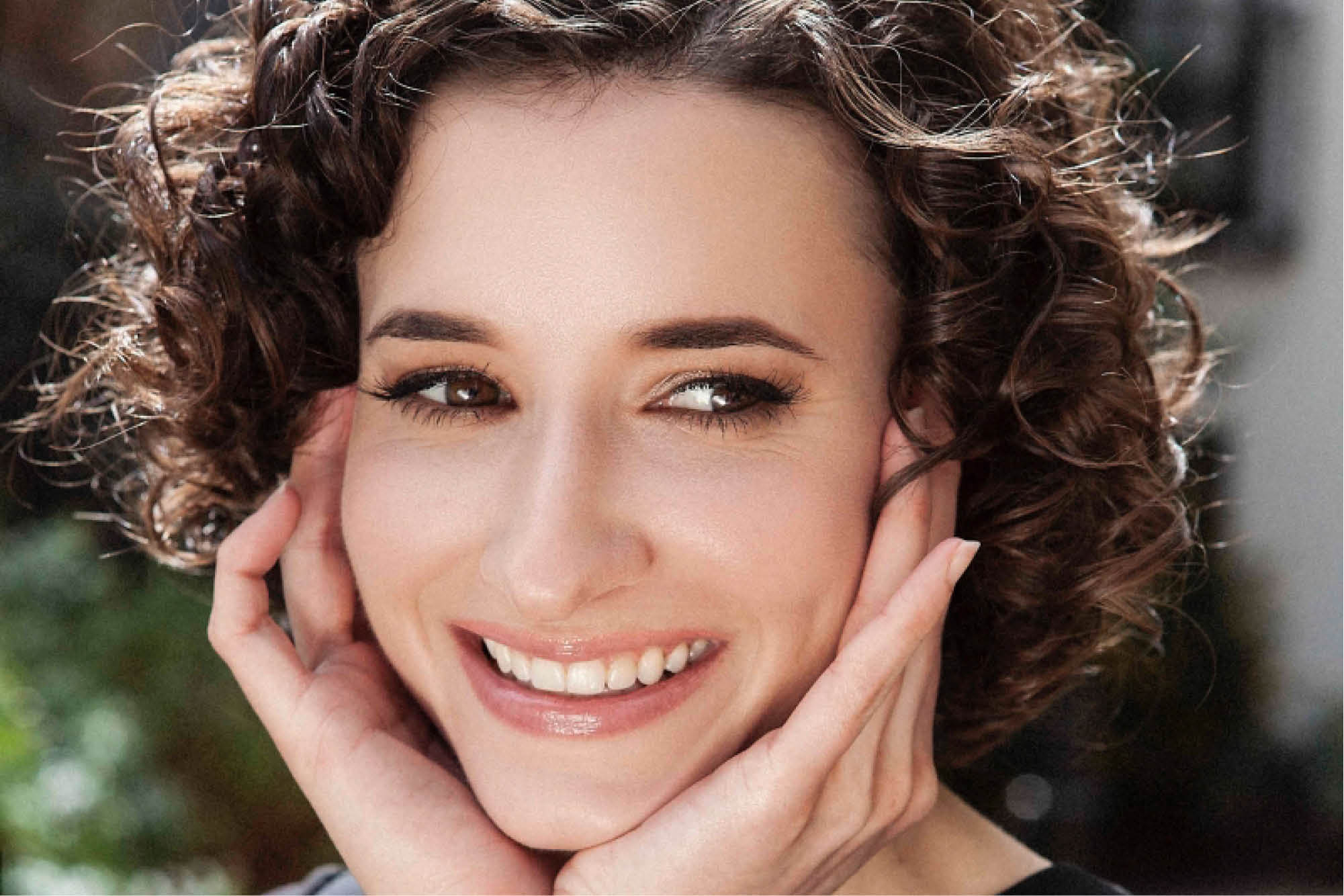 “Strauss was a master at understanding how different voice types work, especially coloratura soprano voices,” Labiner said. “Zerbinetta is the ultimate challenge for a coloratura soprano because not only does the role contain a huge amount of vocal fireworks, but it also requires an enormous amount of stamina.”

Labiner is no stranger to the role, having sung parts of it for staged scene productions during her training with ENO Opera Works program. “When I started learning the aria it immediately felt like trying on a dress that fit perfectly. Along with the music feeling wonderfully comfortable in my voice, the character also moves in the same timing as me,” she said. “We are both fast-paced, bouncy, and bubbly.

“This is my first time getting to perform the entire role,” she added. “I’m thrilled to sing it!”

Ariadne auf Naxos is an opera in two parts, Labiner explained. “It is a battle between some serious opera divas and a giddy comedy troupe. The first half of the opera is a prologue, where the audience discovers that the two groups were meant to give separate performances at a fancy manor house, but they are told at the last minute that they need to perform everything together,” she said.

The opera group, led by an impetuous young composer (double-cast with Kathleen Felty and Lindsay Mecher) was booked to perform its “serious” opera about Ariadne, abandoned by her lover Theseus on the Greek isle of Naxos. The composer is loath to alter his opera, but is convinced by the logic of his teacher (played by Cameron Jackson) and the considerable charms of Zerbinetta.

The opera is essentially an exploration of art and of artists, with a breathtakingly beautiful score and an abundance of dramatic personalities. Despite the challenges, Strauss’ masterful writing allows the singer to explore the delicious technical, musical, and dramatic facets that the score has to offer.

“After the prologue, the second half is an opera-within-an-opera where we see how the two groups combine their talents to create a show,” Labiner said.

In the opera-within-the-opera, a mournful Ariadne (Jenny Schuler) has no company on the desert island except for three nymphs (Anyeé Farrar as Naiad, Sara Roberts as Dryad, and Madeline Hardy and Alexandra Pawlus double-cast as Echo). Zerbinetta and her fellow burlesque performers arrive to cheer her up by singing and dancing. Zerbinetta counsels Ariadne that the best way to get over a lost love is to find a new one. The burlesque clowns pursue Ariadne, and she eventually chooses Harlequin (Andrew Rene).

When a newcomer arrives on the island, Ariadne assumes it is Hermes, the messenger of death, but it is the god Bacchus (Matthew Arnold) who falls in love and promises to set Ariadne in the heavens as a constellation.

“The opera is essentially an exploration of art and of artists, with a breathtakingly beautiful score and an abundance of dramatic personalities,” Labiner said. “Despite the challenges, Strauss’ masterful writing allows the singer to explore the delicious technical, musical, and dramatic facets that the score has to offer.”

School of Music alumnus Tony Zanghi (2015) is assistant director of the opera. Musical preparation is by Angela Vanstory Ward.

A highly sought-after conductor of more than 100 opera productions, David Effron's 50-year-career has included appearances with major symphonies and opera companies throughout North America, Europe, Mexico, and the Far East.

For 18 years, he was on the conducting staff of the New York City Opera, where he conducted many performances, not only in New York, but also with the City Opera residencies in Los Angeles and Washington, D.C.

As a prominent educator, Effron taught at the Curtis Institute of Music and for 21 years, and was head of the orchestral program at the Eastman School of Music, where he trained hundreds of instrumentalists now in professional orchestras worldwide.

His conducting students presently hold music director positions in the United States, Canada, Europe, Japan, and South America. Since 1998, he has been an active conductor at the Indiana University Jacobs School of Music, where he is chair of the Orchestral Conducting Department. He has conducted opera productions of Der Rosenkavalier, Wozzeck, and Peter Grimes as well as six of the 10 Mahler symphonies at Indiana University.

Effron holds degrees from the University of Michigan and Indiana University. He was an assistant to Maestro Wolfgang Sawallisch at the Cologne (Germany) Opera House. He has been a Fulbright scholar and a recipient of a Rockefeller Foundation Grant. He was named Musician of the Year by the National Federation of Music Clubs, and was awarded an honorary doctorate from North Carolina State University.

Effron has conducted 105 operas and most of the standard symphonic works. Maestro Effron will conduct the orchestral reduction by Christopher Fecteau, artistic director of the dell’Arte Ensemble.

Known for her effervescent energy, shimmering high notes, and “sweet lyrical voice” (Plays to See), coloratura soprano Sarah Labiner is one to watch as she quickly rises onto the European opera scene. She made her debut with the English National Opera where she “made a vivid impression” (Opera Magazine) as Jano in Jenufa and was hailed as “lively” (Planet Hugill) and “outstanding” (Opera-Világ). She recently returned to the English National Opera in autumn 2016 as 15-year-old Girl in the new William Kentridge-directed production of Lulu.

Labiner trained with the English National Opera’s Opera Works program. She earned her Master of Music from the Royal College of Music and was a Watson Scholar at the University of North Carolina School of the Arts.

Labiner recently sang scenes of Zerbinetta (Ariadne auf Naxos - 1912 and 1916 versions), Sophie (Der Rosenkavalier), and Poppea (Agrippina) with ENO Opera Works. She has sung roles including Adina (L’elisir d’amore), Clarice (Il mondo della luna), and Graduation Girl (Street Scene) with the A.J. Fletcher Opera Institute and Gasparina (La canterina) at UNCSA; has made appearances with Piedmont Opera; and has covered the role of Sophie (Werther) at the London Grimeborn Festival. Other scenes performances include Amore (Il ritorno d’Ulisse in patria), Despina (Così fan tutte),and Flora (The Turn of the Screw) with the Royal College of Music, and Asteria (Tamerlano) and Ilia (Idomeneo) with Canta in Italia.

Having grown up in the theatre, Labiner has a strong foundation in ballet and dramatic training. Also a keen linguist, she has studied German, Italian, and French, and is currently working to gain further proficiency in Welsh. She has an established London studio where she teaches classical singing students of all levels.

She has won multiple awards at the National Association of Teachers of Singing competition and was awarded a UNCSA Dean’s Discretionary Grant to study in Italy with the Canta in Italia program.