UNCSA has received a pledge of a $2 million planned gift from an anonymous graduate of the School of Music, which will fund merit-based scholarships. It is the largest documented gift from a graduate in UNCSA history.

The gift was announced last night at the New York City launch event for Powering Creativity: The Campaign for UNCSA, a multi-year concentrated fundraising effort that seeks to raise $65 million in support for scholarships, faculty support, facilities improvements, innovation and community engagement by June 2021. With this gift, the campaign has raised $62.2 million as of January 2020.

“We are thrilled and humbled by this extraordinary demonstration of support for our students,” said UNCSA Interim Chancellor Brian Cole. “The gift is especially meaningful because it came from an alum who understands the demands of a UNCSA education. All of us at UNCSA express our deep appreciation to this donor for what will be an incredibly impactful gift.”

Alumni giving is an area of growth for the university. Since the beginning of the campaign, alumni have contributed more than $3.1 million in support of Powering Creativity. 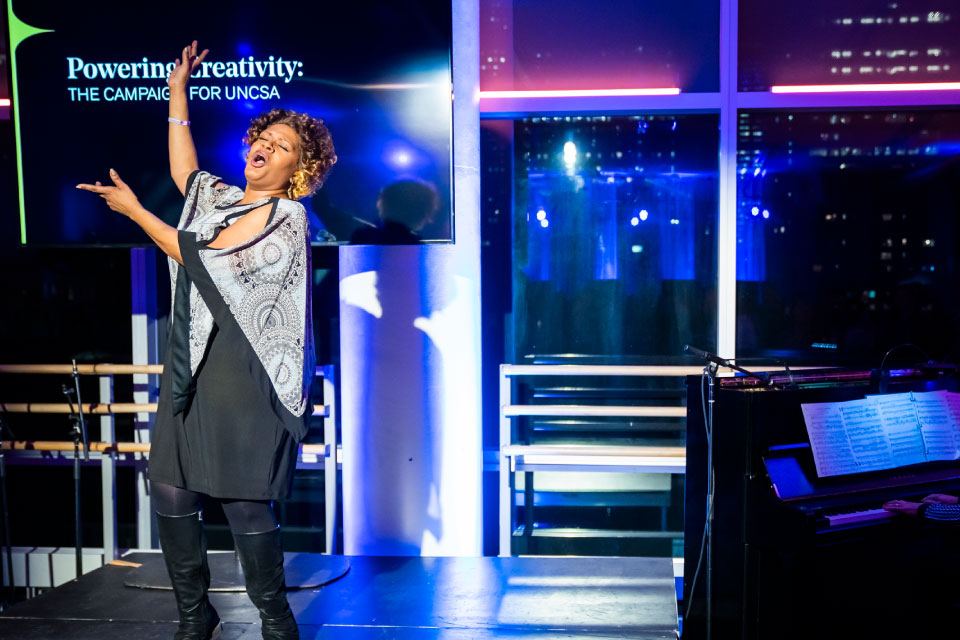 “This gift shows what an incredible difference one individual—one UNCSA graduate—can make on the lives of future students,” said Amy Werner, alumni relations manager. “We are happy that this donor and so many others are finding ways to give back. Whether it’s a $10 donation or returning to campus to teach a master class or seminar, every contribution is important.”

Planned gifts—including will bequests and other estate gifts—are another growing source of support for UNCSA. They allow donors to create lasting philanthropic legacies while also maintaining control of their assets during their lives and providing tax advantages for themselves and their heirs.

“Powering Creativity is bringing out donors from every part of the UNCSA family and encouraging them to make clear demonstrations of their support for this university and all it does for the artistic fabric of our community and our society,” said Ralph Womble, campaign co-chair. “It is very exciting to see a graduate of this amazing school equip future generations with the resources they need to follow in a similar artistic and professional path.”

The theme of widespread support from myriad donors was echoed by Vice Chancellor for Advancement Edward J. Lewis III, who notes that an upswing in alumni participation is an encouraging trend. “Last night’s New York launch of Powering Creativity was a reminder of how deeply intertwined our alumni and other supporters are with the arts community, not only in New York, but also in Los Angeles, Washington, D.C., Atlanta, Chicago, Las Vegas and countless other cities around the nation and world, as well as in our home state of North Carolina,” said Lewis. “This gift validates one graduate’s appreciation for the life changing role that UNCSA has played in the lives of its alumni, and the value of UNCSA to the wider cultural and artistic landscape. We are deeply grateful for this very generous and thoughtful expression of support.”

Powering Creativity: The Campaign for UNCSA launched its public phase at an event on the campus in Winston-Salem in September 2019. The campaign will continue through June 2021 with an additional launch event in Los Angeles planned for May 2020.