"Down in the face of God" will be livestreamed March 5,6 and 7

The School of Drama opens Contemporary Voices: A Virtual Theater Festival in March with livestreams of two prerecorded plays, both by writers who are among today’s most compelling voices in theater. Tim J. Lord’s “Down in the face of God” and Lynn Nottage’s Pulitzer Prize-winning “Sweat” compose Part One of the two-part online festival celebrating a diverse range of contemporary theater performed by third- and fourth-year student actors.

Quin Gordon, director of recruitment for the School of Drama and director of “Sweat,” said it is important for actors to perform work by contemporary writers. “Creating the Contemporary Voices Festival allows us as a program to offer a more diverse set of theatrical voices for our diverse student body to inhabit. Our theatrical heritage is dominated by Eurocentric white male voices and while we have not abandoned the classical canon, we must embrace a wide spectrum of contemporary voices in order to better serve our students and remain relevant,” he said.

With support from the School of Design and Production, both plays were filmed live in Hanesbrands Theatre during the fall semester using protocols adopted by professional theater organizations to perform safely during the COVID-19 pandemic. 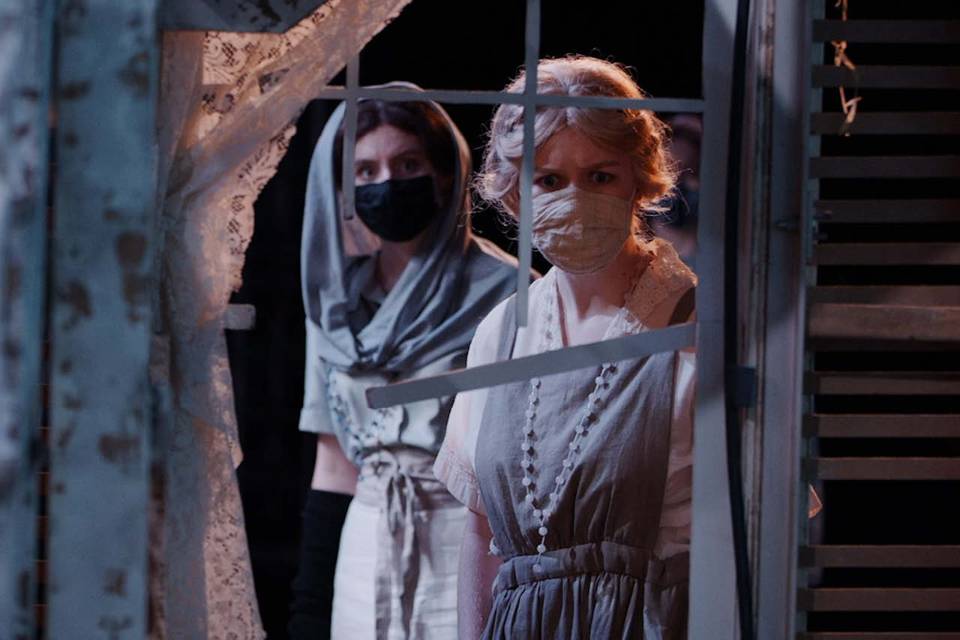 “Down in the face of God”

“Down in the face of God,” a post-apocalyptic mashup of Greek tragedies “The Bacchae'' and “Antigone,” is the first play in a trilogy written by up-and-coming playwright Lord, a native of the Midwest and a member of the disability community. A radical reimagining of the Oedipus story set in modern-day southern Illinois, “Down in the face of God” takes the audience to a dystopian version of the real-life city of Thebes. Lord calls into question identity, religion, familial obligation and what is home.

Director Cameron Knight, associate professor in the School of Drama, and the student actors worked directly with the playwright via Zoom as they developed the production in the fall. “It’s always a great opportunity to work with the writer; it allows for the play to evolve and grow with the playwright making adjustments from what the actors offer,” Knight said. “The cast gets to dive into the story more: understanding the research, influences, goals of the story and its possible impact in the world today.”

Knight added: “The cast got the opportunity to advocate for their identities and representation in the creation of roles, to challenge the writing and gain insight and clarity into the world of the play and the thinking of the writer.”

Beyond the pedagogical value of engaging with the playwright to help shape their characters, Drama Dean Scott Zigler said the process can also benefit students as they graduate and embark on careers. “Actors who are familiar with the playwright might get called for staged readings and workshops, and some writers like Tim Lord are known to create roles with specific actors in mind,” Zigler said.

The play required actors to bring together many aspects of their training. “I am often looking for opportunities for students to put the training into action and to show how it all comes together,” Knight said, “to look at the Greek classics and how they still have relevance in the current times. This play called for students to increase their analytical mind, expand their imagination and to challenge themselves to make discoveries in their work.”

Lord tells stories of people and communities who are often overlooked on our stages and strives to illuminate ignored and underrepresented perspectives. Lord is the recipient of the inaugural Apothetae-Lark Fellowship for a writer with a disability and was a 2017-18 Jerome Fellow at The Playwrights’ Center in Minneapolis.

The cast for “Down in the face of God” includes fourth-year actors Nicole Sollazzo as May, Amar Bains as Ham, Jane Cooper as Ana, Yasmin Pascall as Ora, and N’yomi Stewart as D; and third-year actors Maleek Slade as Pen, Madison Kiernan as Ino and Devlin Stark as Gavi. 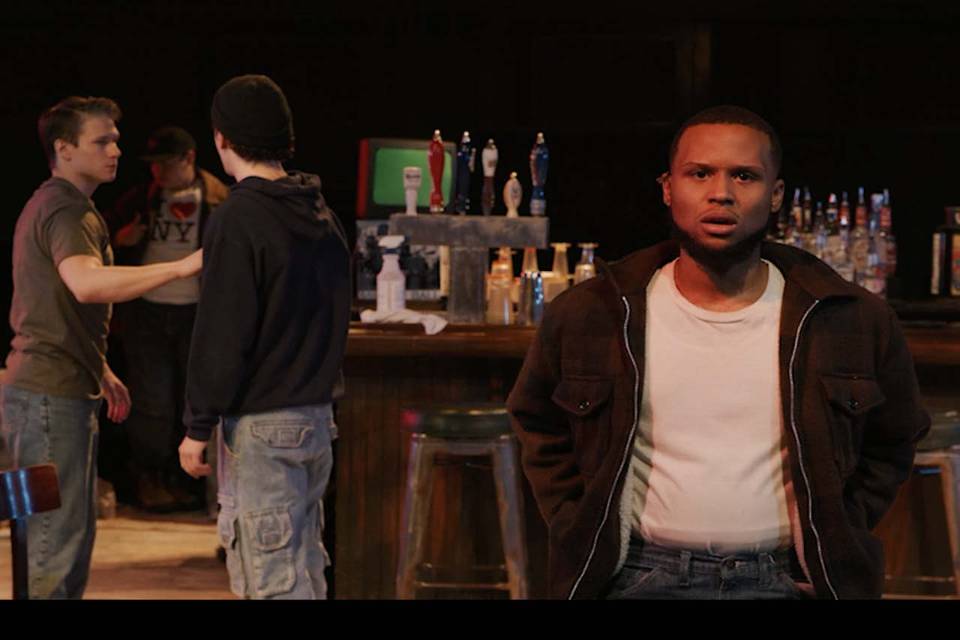 Filled with warm humor and tremendous heart, “Sweat” expertly weaves a tale that endures with themes of economic disadvantage, despair and reconciliation. Set in the Rust Belt town of Reading, Pennsylvania, in 2000 and 2008, the play follows a group of friends who have spent their lives sharing drinks, secrets and laughs while working together on the factory floor. But when layoffs and picket lines begin to chip away at their trust, the friends find themselves pitted against each other, and racial tensions are heightened in a heart-wrenching fight to stay afloat.

Playwright Nottage is known for writing about the lives of marginalized people. “She takes a complex view of humanity and is meticulous in her research,” said director Gordon. “With ‘Sweat,’ she spent several years interviewing the people of Reading, Pennsylvania, and collecting stories on the impact of the 2008 Great Recession on this hard-hit small city.

“In this play, there are no heroes or villains  ̶̶̶  everyone is complicit in the breakdown of community when we only look out for ourselves. Listen closely when you watch the livestream — it's in the last two lines of the play,” Gordon said.

The New York Times said of the play, “Keenly observed and often surprisingly funny — but ultimately heartbreaking — the work traces the roots of a tragedy with both forensic psychological detail and embracing compassion.”

Gordon describes the work as a “true ensemble piece. …  Every actor gets their moment/speech and no one part is any more or less important,” he said. If you watch closely, the hero of our play is actually the character with the fewest lines.”

Nottage is a professor of playwriting at Columbia University. She is the only woman to have won the Pulitzer Prize for Drama twice.

Samuel Bailey, a third-year student in the School of Filmmaking, is the film editor.

The Festival will continue with “Neaptide” by Sarah Daniels, to be livestreamed in June. “Our Lady of 121st Street” by Stephen Adly Guirgis, has been postponed to the fall; dates TBA.