Student ensembles, vocalists and faculty perform repertoire ranging from the Renaissance to premieres of works by the composers of today, from jazz to Baroque, in a wide-ranging series of free livestreams from the School of Music throughout March.

Free tickets to access the livestreams are available online, or by contacting the Box Office at 336-721-1945. Performances will be available on demand after the streams on the School of Music Facebook page and at uncsa.edu.

UNCSA student ensembles created to replace the larger symphony orchestra during COVID-19,  including the Brandenburg Ensemble, the Wind Dectet and the Chamber Orchestra, perform a program of works by Josef Suk, Anton Dvořák and Joseph Haydn.

As a young composition student at the Prague Conservatory, Josef Suk was encouraged by his mentor, Anton Dvořák, to compose a piece that was "lighter in mood." He responded with his Serenade for String Orchestra, to be performed on this program by the Brandenburg Ensemble conducted by UNCSA Associate Conductor Karen Ní Bhroin. Dvořák's gorgeous melodic writing and distinct national character are present in the chamber winds arrangement of his "Czech Suite'' performed by the UNCSA Wind Dectet conducted by Mark A. Norman. Additionally, the UNCSA Chamber Orchestra performs Haydn's Symphony No. 22, "The Philosopher," conducted by Ní Bhroin. 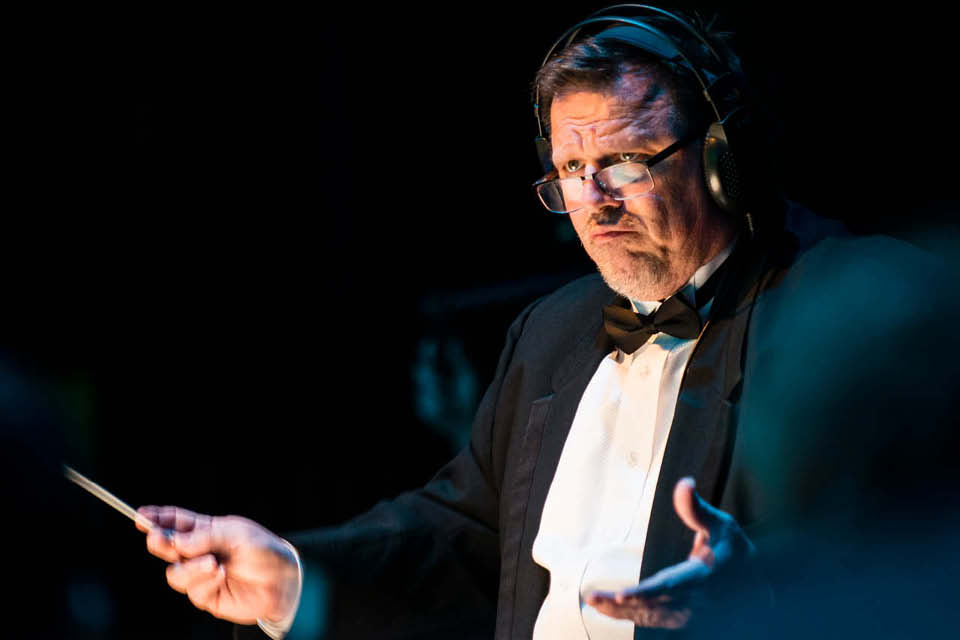 Renaissance and Baroque music from France, Italy and Germany is remastered for varied ensembles in this energetic concert program. Italian influences are heard in Respighi's “Ancient Airs and Dances” performed by the Amadeus Players conducted by Karen Ní Bhroin. Robert Spittal's contemporary reflection on 16th-century French songs provides a lively, heartfelt and capricious suite as performed by the Chamber Winds conducted by Mark A. Norman. The concert concludes with the premiere of the Bergstone Brass, a brass ensemble named in memory of the School of Music’s founding faculty-artist in horn, Fredrick Bergstone, who passed away in January. They will perform Brian Balmages' provokingly powerful brass and percussion choir work "Ite missa est" featuring Martin Luther's "Ein feste Burg ist unser Gott" (“A Mighty Fortress is our God.")

A festive evening of Baroque music performed by students and faculty will honor the Kingston Harpsichord, a full concert Franco-Flemish double harpsichord in 18th-century style, made by Richard Kingston in Marshall, N.C., in 1987 and newly acquired by UNCSA. The program will include four works by J.S. Bach: Trio Sonata in G major, BWV 1039, for flute, oboe, and continuo; Weihnachts-Oratorium, BWV 248; Sonata No. 2 in A major, BWV 1016; and Brandenburg Concerto No. 3, BWV 1048. Additional works on the program are Sonata in G major, Wq. 133, “Hamburger” by Carl Philipp Emanuel Bach; “Mein junges Leben hat ein End, Sw WV 324 [6 variations]” by Jan Pieterszoon Sweelinck; Toccata in D minor by J. Froberger; Sonata in G major, K. 427 by D. Scarlatti; and Sonata No. 5 in F major by Jan Dismas Zelenka.

Founded in 2007 to provide students with opportunities to perform art music that reflects current trends and cultural thinking, the nu Ensemble presents a concert of works that represent the cutting edge of the current music scene. The concert will include the chamber premiere of Joel Puckett's "It Perched for Vespers Nine" and the East Coast premiere of Quinn Mason's "Changes/Transitions," a celebratory view on the progress made through the recent Black Lives Matter protests. It asks the question, “What can we do to get where we want to be?”

The concert will also feature works by Carlos Simon and Allison Loggins-Hull as well as the premiere of a new work by student composer Drew Harris. It will be conducted by School of Music Interim Dean Saxton Rose and conducting faculty-artist Mark A. Norman.

An Afternoon at the Opera: Undergraduate Opera Scenes
Sunday, March 28 at 2 p.m.
Livestream (From HanesBrands Theatre)

Join the UNCSA Undergraduate Opera Workshop as they present two one-act operas in the style of a 1940s radio show. John Duke’s “Captain Lovelock” is a tale of a wealthy, elderly widow who wishes to marry a young army officer. Her daughters conspire with a marriage broker to show the old woman the folly of her plan. Also on the program is Offenbach’s “Monsieur and Madame Denis” in a new translation by Steven LaCosse, stage director and artistic director of the A.J. Fletcher Opera Institute. The story is about a niece who is kidnapped from boarding school by her fiancé, a spicy maid who saves the day, and a puffed-up sergeant in pursuit of the abducted niece. 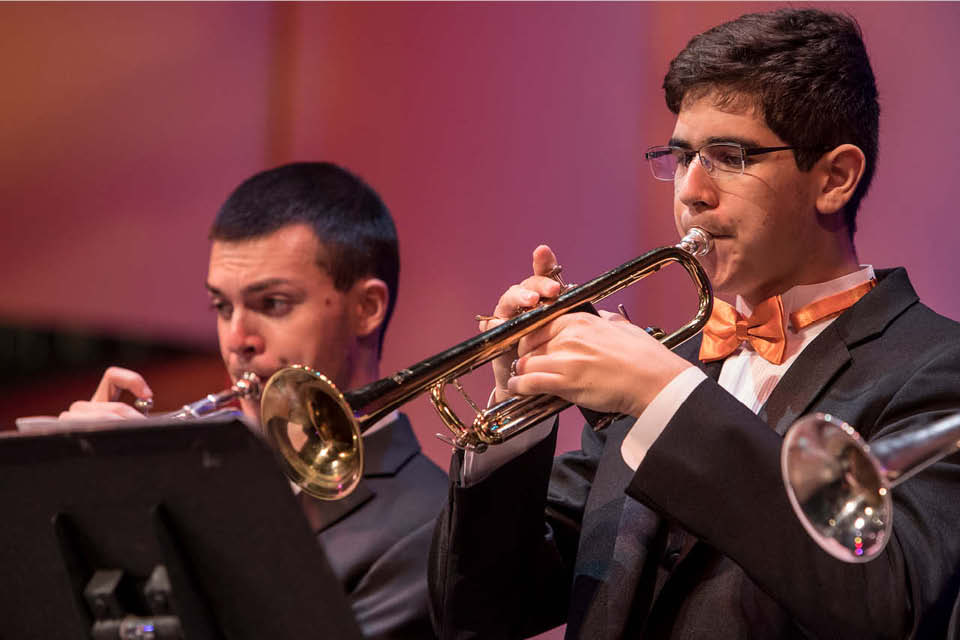 Student wind and brass ensembles will perform March 15 in concert to be livestreamed from Watson Hall. / Photo: Bert VanderVeen

Other student ensemble concerts include: 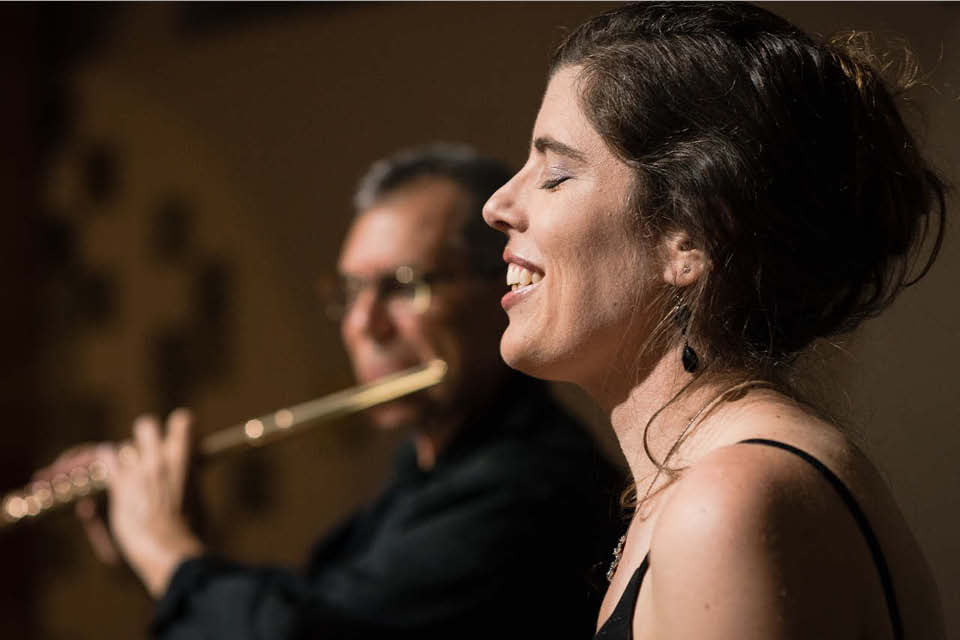 Anima Vox (Tadeu Coelho and Carole Ott Coelho, will perform March 9 in a concert to be livestreamed from Watson Hall.

O Blissful Loss of Self: Explorations of Ecstasy in Poems by Women
Tuesday, March 9 at 7:30 p.m.
Livestream (from Watson Hall)

A program of all world premieres by female composers commissioned for this concert, featuring the flute and soprano duo Anima Vox, made up of faculty-artist Tadeu Coelho, flute, and his wife, soprano Carole Ott Coelho. Drawing inspiration from “ecstatic poetry” by women’s voices who have been silenced, dismissed or forgotten, the concert will also incorporate dance as a visual exploration of these themes. The concert will feature works by an international group of composers coming from the United Kingdom, Mexico, Iran and the U.S., including Elyse Hart, Jane K (Evgeniya Kozhevnikova), Melissa Tosh, Adriana Romero and Negin Zomorodi. It will feature poetry drawn from Mirabai, Frough Farokhzad, Fayuan, Buddist nuns of the Mid-Ming and the Song dynasties, Chaoyan, and Sara Teasdale. Anima Vox will improvise on the poetry of the feminist, promoter of Pan-Americanism, activist and writer Muna Lee. Dance will be featured in three of the works, choreographed and performed by Dylan Reddish of Greensboro.

Violinist Kevin Lawrence and pianist Dmitri Shteinberg continue their long-standing collaboration in a recital that contrasts the existential brooding of Shostakovich with the genial lyricism of Brahms and an electrifying display of virtuosity by minimalist composer John Adams. The program includes Brahms’ Sonata No. 2 in A major, Op. 100; John Adams’ “Road Movies”; and Shostakovish’s Sonata for Violin and Piano, Op. 134.