Zoom rehearsals. Hybrid classes and distanced studio spaces. Masked faces. Pint-sized call sheets and sparsely populated stages. This is not what you’d expect at a conservatory offering hands-on training for the next generation of artists and creative innovators. Until now.

During 2020-21, the COVID-19 pandemic cast a formidable shadow over the world, the effects of which will be felt for years to come. UNCSA is at the intersection of two deeply uprooted industries: arts and education. After a spring semester that pivoted to virtual learning, UNCSA was one of few conservatories of its kind to be able to bring students back to campus for in-person training. How could the university ﬁnd a way to allow a now-divergent community of students, faculty and staff to return to campus safely?

“The arts are facing a new paradigm,” says Chancellor Brian Cole. “Our mission is to train our talented students for professional careers in the arts. That mission has remained the same, even though the way we do it is different.”

Indeed, almost everything is different. Faculty and staff worked tirelessly to invent ways to continue delivering conservatory training at the highest level, despite the limitations presented by the pandemic. Community health standards, including mask wearing and social distancing in and out of the classroom, were adopted across campus. Each arts school adapted safety protocols from their field to meet the needs of students, faculty and staff — protocols that closely reﬂected the way the arts industry itself was changing to survive.

The School of Filmmaking’s protocols, for example, mirror those of the film industry, which include the addition of a COVID-19 compliance officer on all film sets. The new procedures allowed students to continue to make films safely. Fourth-year cinematographer Willow Longbrake jumped at the opportunity to fill the new role.

“It allowed me to train and learn more about the virus and the precautions to prevent spread,” says Longbrake. On set, the compliance officer is tasked with checking in crew members, taking temperatures and monitoring the crew to ensure everyone follows protocol. “Being able to make films with my peers is something I am grateful to have been able to continue doing this year,” she says. But there were challenges to overcome. Scripts were reworked, schedules adjusted and all films had to be shot on campus. Third- and fourth-year films premiered in virtual and drive-in screenings, instead of in a theater or on the typical annual trip to Los Angeles.

“Those challenges pushed my peers and me to use our creativity to the best of our abilities to make films,” Longbrake says, adding that the most fun part of collaboration this year has been the students’ collective excitement to create. This excitement has permeated the (clean, scrubbed) campus, from film soundstages to dance studios to Watson Hall.

Those challenges pushed my peers and me to use our creativity to the best of our abilities to make films.

The School of Music’s A.J. Fletcher Opera Institute confronted signiﬁcant challenges, as the CDC early on deemed singing a high-risk activity for transmission of COVID-19. But the program found creative ways to adapt its classes, rehearsals and mainstage performances. Leasing a downtown office space allowed the small program to build security and comfort, says André Peele (B.M. Music ’11, H.S. Music ’07), a Fletcher Fellow who completed a Professional Artist Certificate through the institute this year. Meeting rooms with glass walls were converted into practice rooms. A singer could perform inside the room, unmasked, while a teacher stood outside to give instruction. The space was also convenient to the Stevens Center, where winter and spring operas were performed for virtual audiences. 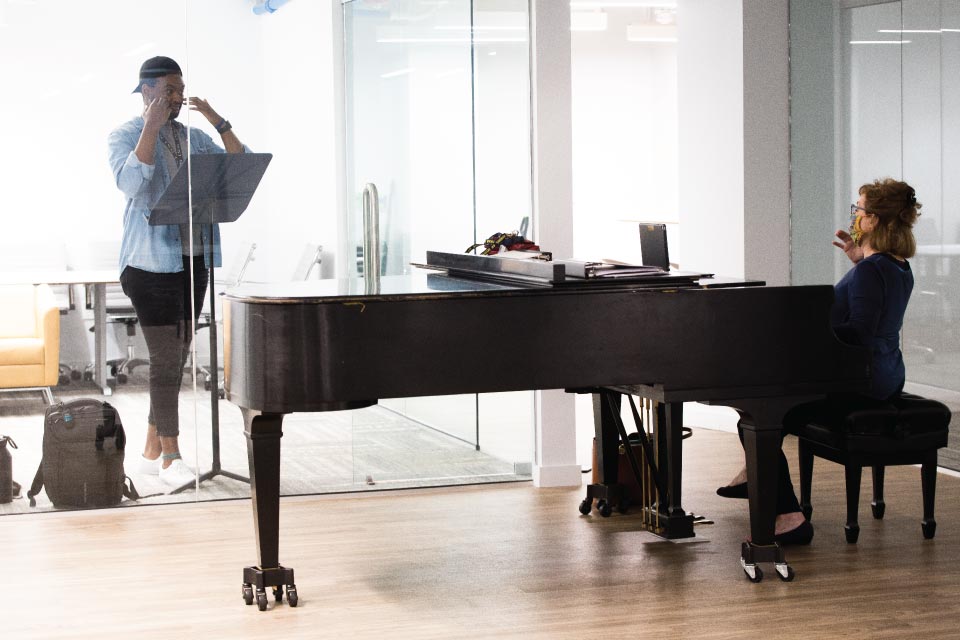 Both operas were double billed with shorter selections, minimizing the number of performers onstage at a time. The School of Design and Production prioritized safety for cast and crew. Health screenings were completed upon arrival, and zones were assigned to avoid too many people congregating in one area. “There was deﬁnitely a sense of isolation,” says Peele, explaining that performers were confined to their dressing rooms when not onstage. “I was in the second show, and never saw the first one. I could hear it, but not see it,” he adds. “We couldn’t see our colleagues performing because the house had to remain empty.” Still, “There are so many artists who can’t perform in any capacity,” says Peele.
“But we could.”

The Fletcher Institute also continued its educational outreach program, a pillar of the institute that introduces opera to elementary school-age children. Instead of visiting schools in person, Fletcher Fellows have performed their short program, “Beethoven Rocks,” among Plexiglas partitions — livestreamed from Watson Hall to students in their classrooms. Finding a creative way to continue the outreach program was of paramount importance, according to Peele. “The older you get, the more you look back and recognize the people who helped to get you to where you are as an artist,” says Peele. “You’re always planting seeds for future artists. It’s important. I’m glad we’ve been able to continue our outreach.”

Faculty and staff at UNCSA called upon their best creative skills to preserve performance opportunities for students during the pandemic, despite the inability of audiences to gather in person.

WATCH PERFORMANCES ON THE UNCSA ON DEMAND HUB

Performances were presented to audiences worldwide through livestreaming and on-demand video, creating filmed versions of dance and theater, and using the state-of-the-art camera system previously installed in the School of Music’s Watson Hall. During the fall semester, the School of Drama presented Shakespeare’s “Henry V” in the style of an old-fashioned radio play, updated for today’s digital world. “We’re a very visual culture now,” says voice and text faculty member Sara Becker. “This was a way to go back and put words and language ﬁrst.”

Actors were never in the same room at the same time. All rehearsals and recordings were conducted over Zoom, then files were delivered to the sound design team to add background sounds and environmental context. “It’s a play about war,” says Director of Sound Design Jason Romney. “The actors talk and they fight. We created the sounds of battle. We had to think about where the characters are. What’s the acoustic signature of where they are? What are the sounds?”

The performance offered students a new challenge of emotionally connecting with audiences only through sound and audio. “With an established and dramatic play like ‘Henry V,’ our students not only embraced the fact that they were creating a theatrical environment,” says sound design faculty member Lindsay Jones, “but they continued the tradition of immersing an audience so completely in a story that they suspended their disbelief and sat on the edge of their seats in the listening experience.”

“Henry V” premiered in November, while students in the schools of Dance, Filmmaking, Design and Production, and Music were bringing to life an ambitious retelling of the beloved UNCSA “Nutcracker,” presented for the ﬁrst time on film. Directed by Interim Dean of Dance Jared Redick and choreographed by Dance faculty member Ilya Kozadayev, the 2020 “Nutcracker” is an example of the ingenuity, perseverance and passion of the UNCSA community.

High school ballet student Emma Cilke performed the role of Clara, and embraced the task of developing her character for film. “I enjoyed working with a different mindset,” she says. Unlike other performances, her “Nutcracker” approach centered on conveying the storyline for a film audience. “As dancers, we train to emote our reactions to an audience far away. When putting a camera up close to your face, it’s different to make the reaction more genuine,” she explains.

Each role onstage or on set was different from those in previous years. The School of Filmmaking joined to support the production for the first time. The willingness to adapt and create a new work for film paved the way to success. Expanding to a digital format garnered the production’s largest audience in its 55-year history. The film was viewed more than 116,000 times throughout the holiday season, including a series of broadcasts on PBS North Carolina. The virtual Opening Night Scholarship Beneﬁt, during which the “Nutcracker” film premiered, raised $255,394 in net funds for student scholarships.

Though “The Nutcracker” was arguably the largest collaborative undertaking of the year, all schools incorporated some degree of filmed
work into their curriculum or performance calendar. For contemporary dance faculty member Kira Blazek-Ziaii, teaching dance on film was a continued passion. “With video, you can only get better by doing. A lecture doesn’t serve you,” she says. Blazek-Ziaii worked with third-year dancers to create a new work, “Pretender,” in the fall. Though the project was scaled back over time, it provided an excellent study for students to experiment with dancing on film. “You feel more conscientious about asking people to give more energy or more time during COVID,” says Blazek-Ziaii, who initially intended for the piece to be twice as long. “Everyone has a lot going on.”

This mindfulness served her well when advising senior contemporary students in the Pluck Project. Together, they spent the spring semester preparing to present a virtual showcase of their work. “I consider Pluck to be like a small, collaborative company would be outside of school,” says Blazek-Ziaii. “What are those small companies doing? How can we learn from them?”

Ultimately, students elected to perform choreography onstage to keep the production as similar as possible to the New York City showcase they would have presented before the pandemic. “They’re wearing the hats of dancer, choreographer and cinematographer,” says Blazek-Ziaii. And they’re embracing the challenge. “I’ve seen some maturity coming forward; a lot more gratitude. They’re aware that other schools have stayed fully online.”

If I can emphasize one thing, it’s my desire to teach these kids how to be scrappy. … We always learn through doing, which is what I appreciate about this school.

Gratitude is a common theme when reﬂecting on a wildly different school year. Much was lost, but much was gained. And as we peer around the corner at the upcoming year, there’s an eagerness to jump in and get to work creating art together once more. “If I can emphasize one thing,” adds Blazek-Ziaii, “it’s my desire to teach these kids how to be scrappy. … We always learn through doing, which is what I appreciate about this school.”