UNCSA School of Filmmaking is among the world's top 50

The UNCSA School of Filmmaking, celebrating its 25th anniversary this year, is among the world’s 50 most influential film schools, according to Variety, the weekly entertainment magazine and website with 17 million readers each month. In its May 14 “Entertainment Education Report,” now available online, the magazine highlights “programs and educators at colleges and universities around the world that give students the tools to enter the showbiz industry.”

Susan Ruskin, Dean of the School of Filmmaking, said the recognition by Variety is not surprising. “In 25 years, we have built a robust film program, with expert faculty who are closely tied to the industry, facilities that are state-of-the-art and well-equipped, and a curriculum that develops technical skills but also nurtures creativity and inspires entrepreneurship,” she said. “We are launching alumni who are diverse storytellers and creative innovators. They are landing jobs – and creating jobs -- in all aspects of the film and television industry.”

The Variety article highlights faculty member Bob Keen, department chair of visual effects and immersive media, who has more than 40 years of experience as a special and visual effects designer and supervisor and feature/second unit director. Though UNCSA has top-notch facilities and equipment for computer-generated imagery (CGI), Keen told Variety he encourages students to think outside the box. “We teach them the old techniques as well as the new ones,” he said. “There is always more than one way to do an effect. But we explore the whole gamut of possibilities.” 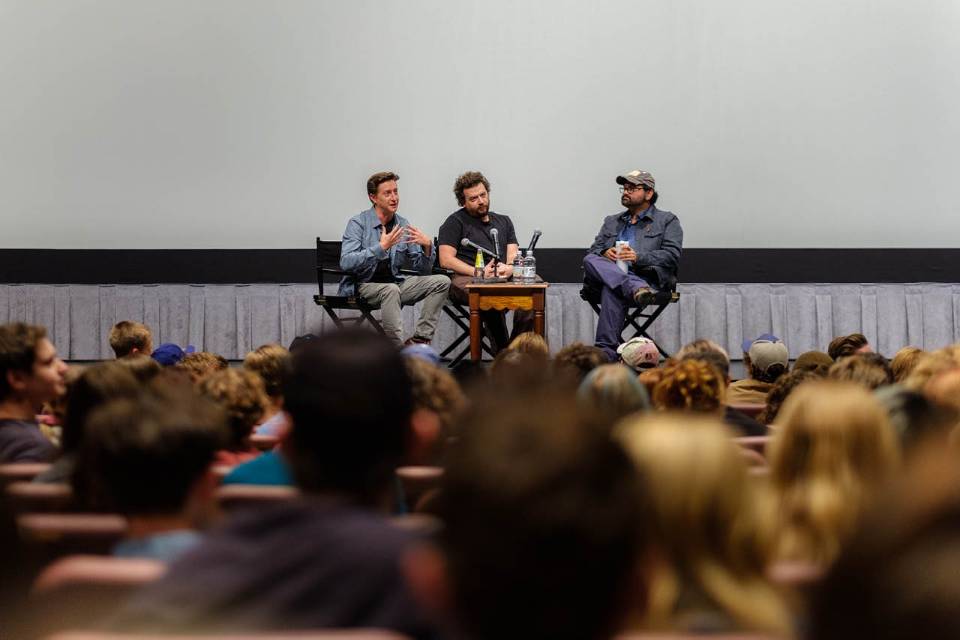 Ruskin said expert faculty mentors like Keen have merited the UNCSA film school’s rapid ascent on lists and rankings by leading industry platforms like TheWrap, The Hollywood Reporter and MovieMaker magazine, in addition to Variety. “With our student-to-faculty ratio of 9-to-1, students have extraordinary access to educators who are also working in the industry,” she said.

Students also learn from guest artists including Ted Hope of Amazon Studios, Peter Block of Lionsgate, and Yair Landau, formerly of Sony Pictures Digital Entertainment; and from alumni who have gained prominence in the industry. Alumni who have returned to screen films, share career advice and network with students include Jeff Fradley (’98), Danny McBride (’99), and David Gordon Green (’98) of the 2018 “Halloween” reboot; editor Zene Baker (’98) with “Thor: Ragnarok”; Rebecca Green (’01) with the independent horror sensation “It Follows”; Brett Haley (’05) with “The Hero”; Jeff Nichols (’01), with “Loving”;  Alex Moratto (’10) with “Socrates,” his debut feature film that earned him an Independent Spirit Award as “one to watch”; and Martha Stephens (’06), winner of Film Independent’s John Cassavetes Award with “To the Stars.”

Alumni connections are leveraged each spring when graduating students travel to Los Angeles for the senior thesis film screening. While in L.A., they meet with industry and studio executives, connected by UNCSA faculty and alumni. The recent weeklong trip in May 2019 included meetings with executives from Bad Robot, Paramount, Warner Bros., Disney and New Line, as well as agencies such as Gersh, WME and CAA, and many more. 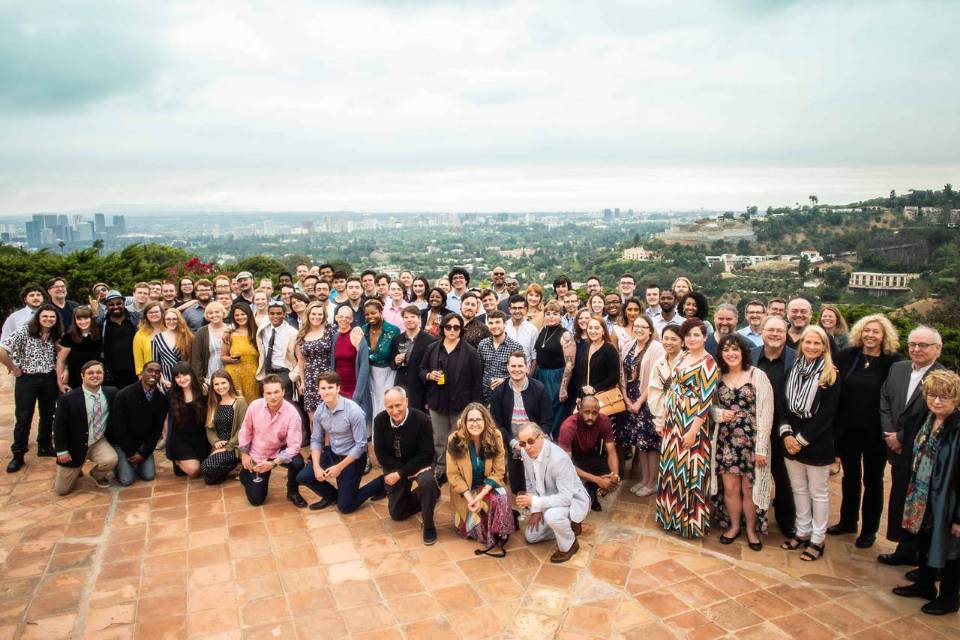 The Filmmaking Class of 2019 screened their senior thesis films in Los Angeles, where they also met with industry and executives. Photo: Theo Sturz

In addition to those mentioned above, alumni include Vera Herbert (’11), writer and producer of “This Is Us”; Tori Lancaster (’15), art director and production designer for “Maine” and “The Miseducation of Cameron Post”; Setu Raval (’08), Senior Manager of Nominations for Film Independent Spirit Awards and producer of the Indian Film Festival of Los Angeles; Michael Sledd (’01), producer and production manager for “I, Tonya” and “Dallas Buyers Club”; D.C. Wade (’10), talent agent with William Morris Endeavor; and Zoe White (’04), cinematographer for “The Handmaid’s Tale.”

The School of Filmmaking is home to state-of-the-art facilities arranged along a “Main Street” built to resemble a studio backlot. Well-equipped sound stages, a music recording stage and a Foley stage are in close proximity to the New Media Building, dedicated to production design, animation and special effects. UNCSA also houses the fifth largest noncommercial film archives in the country.

A pioneer in immersive entertainment training, the film school launched the Media + Emerging Technology Lab (METL) in 2017to both define and shape the impending evolution of how augmented reality and virtual reality story content will be created, consumed and told. METL hosted the inaugural Future of Reality Summit in November 2018, to initiate cross-field discussion in medicine, sports, religion, business, entertainment and technology, exploring immersive storytelling strategies and audience engagement. The two-day summit was hosted by Kent Bye, creator of the Voices of VR podcast, for which he has interviewed hundreds of pioneering game developers, enthusiasts and technologists driving the resurgence of virtual reality. 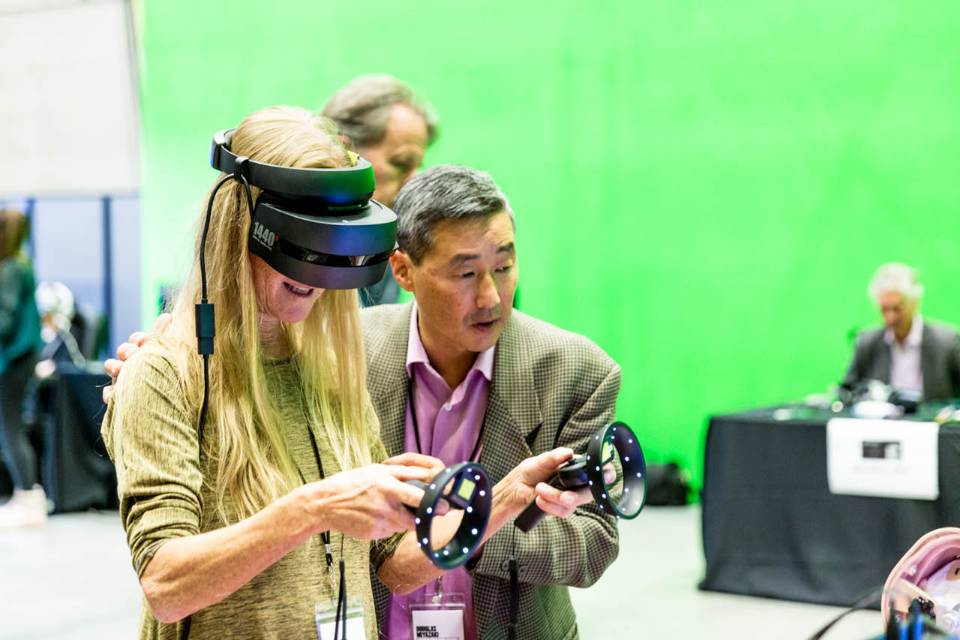 New graduate programs in Creative Producing and Screenwriting were introduced in 2016-17 and were instantly over-enrolled, with students of diverse backgrounds who contribute to the richness and quality of stories being developed.  Lauren Vilchik, Assistant Dean of Graduate Studies for the film school, said the students in creative producing and screenwriting come with varied real-life, leadership and storytelling experiences, though not from traditional film school programs.

“Filmmaking is a collaborative art, so the difference in perspectives is very important,” she said. “You don’t want a cohort of homogeneous thoughts.”

The UNCSA School of Filmmaking is also home to the top-ranked M.F.A. program in Film Music Composition. “We're the only film school that has a music composition program built in, so every film we produce can have an original score,” said Chris Heckman, an alumnus and now director of the program. “Students in Film Music Composition have to meet the visions of the filmmakers, just like the real world. It is a truly collaborative effort designed to mimic a professional post-production process. From reading scripts, to writing demos, spotting, recording, mixing, and mastering, every step of the process is covered and experienced.”

UNCSA’s top-quality education offers a wealth of hands-on filmmaking experience and the latest in filmmaking and technologies with tuition that is up to $50,000 less than that of the other prominent film schools.  “And students begin making films – all funded by the University – during their first year,” Dean Ruskin said. “That doesn’t happen elsewhere, and it offers immeasurable value to the educational experience and a way to level the playing field for all students.”