“Black Ice,” an interactive virtual reality (VR) short film created at the School of Filmmaking at UNCSA, has been selected to screen at the South by Southwest Film Festival (SXSW), March 13-15.

“Black Ice” will be shown as part of the XR Experience at SXSW, an exhibition that showcases outstanding immersive projects by an array of talented international producers. It was selected as one of just 29 films from hundreds of applicants, and it is the first film created at UNCSA to be accepted for screening at SXSW. Information about 2022 screenings and a complete festival schedule can be found at sxsw.com.

“The School of Filmmaking is very proud of the artists who created ‘Black Ice’ and the creativity that caught this significant festival’s attention,” said Deborah LaVine, Dean of the School of Filmmaking. “Arif, Lawrence and Darren’s work is a wonderful representation of the audacious and bold filmmaking possible in the interactive space, and the innovative work that is supported and cultivated at UNCSA.”

"The team and I are thrilled to have ‘Black Ice's’ world premiere at SXSW, one of the world's leading film festivals,” said Khan. “This project couldn't have been possible without the generous support from UNCSA and METL. The Immersive Storytelling Residency provided us with time and resources to experiment with emerging technologies to create a truly unique cyberpunk thriller about editing memories, and we’re incredibly thankful for the opportunity.” 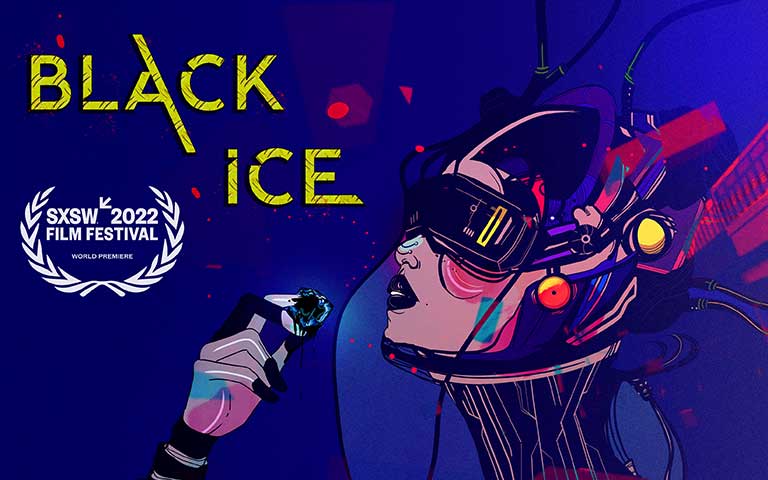 “Black Ice” is set in the cyberpunk future, as a young woman visits a memory editor to suppress a dark memory of a murder she committed. However, the more the editor alters the memory, the more she finds herself wanting to kill again. “Black Ice” is a single-player cinematic VR experience that explores the dangerous power of memories and how much they make up who we are, for better or worse.

Khan added, “What's special about SXSW this year is that in addition to the in-person event in Austin, the festival will also include a virtual XR program, which will be accessible to online attendees everywhere. As a result, we can’t wait to unveil ‘Black Ice’ to the whole world next month."

The Immersive Storytelling Residency brings together screenwriters, game developers and 3D technical artists, providing them access to advanced technologies and mentoring from award-winning faculty and industry leaders to create fully realized VR experiences – forming a new paradigm for art and storytelling in the 21st century. “Filmmaking in virtual reality continues to push beyond the boundaries of traditional cinematic storytelling,” said Ryan Schmaltz, director of METL. “I am thrilled with the quality, creativity and passion that has emerged out of this year’s residency, and that SXSW has recognized ‘Black Ice’ in particular.”

Arif Khan is a VR writer/producer/director working in the film and technology industries including at SXSW, Airbnb and Oculus; he has an Master of Fine Arts in film production from University of Southern California - School of Cinematic Arts, and an Master of Arts in creative writing from the University of Cambridge. Darren Woodland Jr. is a multimedia designer and 3D generalist focusing on interactive media, immersive technology, sound design and narrative storytelling. He has a Master of Art and Design from North Carolina State University where he was a research assistant for the The IntelliMedia Group (Center for Educational Informatics) working on digital modeling, animation and game design. Lawrence Yip is an XR developer who has worked as a developer and designer at University of British Columbia Department of Medicine and Stony Brook University; he holds a Bachelor of Science in information systems from Stony Brook University and a certificate from Vancouver Film School in AR/VR design and development.

The award-winning faculty in the School of Filmmaking have decades of real-world experience and a passion for mentoring undergraduate and graduate students in concentrations that include animation, cinematography, directing, film music composition, picture editing and sound design, producing, production design and visual effects, and screenwriting. UNCSA co-hosts the RiverRun International Film Festival in Winston-Salem and is a partner of the Sundance Institute. The film school is dedicated to the exploration and production of immersive storytelling content through state-of-the-art facilities and partnerships offering students the latest programs such as motion capture technology and real-time game production.