The University of North Carolina School of the Arts (UNCSA) announces the spring performance season, bringing a range of events from the university’s five arts schools to the community and beyond with a robust series of virtual performances. UNCSA continues to adjust to the limitations of COVID-19 while presenting inventive delivery of theater, dance, music, film and more that mirrors the creative evolution of a performing arts industry facing the effects of the pandemic.

Highlights of the season include the world premiere of a newly commissioned contemporary dance work by Larry Keigwin; the return of Photona, a multimedia show of lighting and projections; Contemporary Voices: A Virtual Theater Festival of four filmed plays; on-demand screenings of films from the top-ranked School of Filmmaking; a multitude of livestreamed performances from the School of Music, including two opera double bills; and more.

“Performance opportunities are one of the hallmarks of rigorous conservatory training, said Chancellor Brian Cole. “UNCSA continues to create innovative yet safe and industry-approved protocols for rehearsing and performing during the COVID-19 pandemic. We are proud to share the work of our talented student-artists with our community of arts lovers, and reach even more people through our virtual events.”

Information about accessing performances is available online. Highlights of the performance season, presented for free unless otherwise noted, include:

World premiere of new dance work on film by Larry Keigwin
Friday, April 23 at 7:30 p.m.
Livestream (prerecorded content)
The School of Dance presents the world premiere of a new contemporary dance work by award-winning choreographer Larry Keigwin, commissioned for seniors in the contemporary dance program. Celebrated for creating acclaimed virtual works in the COVID-19 world of online dancemaking, Keigwin sets his electrifying and refreshing vision to new music by New York-based composer and sound designer Curtis Macdonald. The new work will be captured on film in multiple locations throughout Winston-Salem this spring, showcasing the athleticism and artistry of the Class of 2021.

Photona: Pulse
Friday, Feb. 26 at 7:30 p.m.
Livestream
The School of Design & Production presents the return of its wildly popular themed multimedia show of lighting and sound. Mentored by industry leaders and UNCSA faculty members Eric Rimes, Josh Selander and Clifton Taylor, lighting designers showcase their creativity and proficiency working with the latest equipment on loan from industry partners. With original compositions by students in the sound design program, Pulse shares stories of both the challenges and accomplishments of the past year.

Contemporary Voices: A Virtual Theater Festival
March, April and June 2021
The School of Drama presents four plays by acclaimed contemporary playwrights who examine issues of our time and give voice to those who are not often heard. The filmed plays, featuring third- and fourth-year student actors, will be released in two installments in the spring and summer.

Contemporary Voices: A Virtual Theater Festival, Part 1
“Down in the face of God” by Tim J. Lord
Friday and Saturday, March 26-27 at 7:30 p.m.; Sunday, March 28 at 4 p.m.
Livestream (prerecorded content)
“Down in the face of God,” a post-apocalyptic mashup of Greek tragedies “The Bacchae'' and “Antigone,” is the first play in a trilogy written by up-and-coming playwright Tim J. Lord that is a radical reimagining of the Oedipus story. Set in modern-day southern Illinois, “Down in the face of God” takes the audience to a dystopian version of the real-life city of Thebes. Lord calls into question identity, religion, familial obligation and what is home.

As a native of the Midwest and a member of the disability community, Lord tells stories of people and communities who are often overlooked on our stages and strives to illuminate ignored and underrepresented perspectives. Director Cameron Knight and UNCSA Studio IV and Studio III drama students had the opportunity to work directly with the playwright via Zoom as they developed the production. The performance was filmed live in Hanesbrands Theatre during the fall semester. 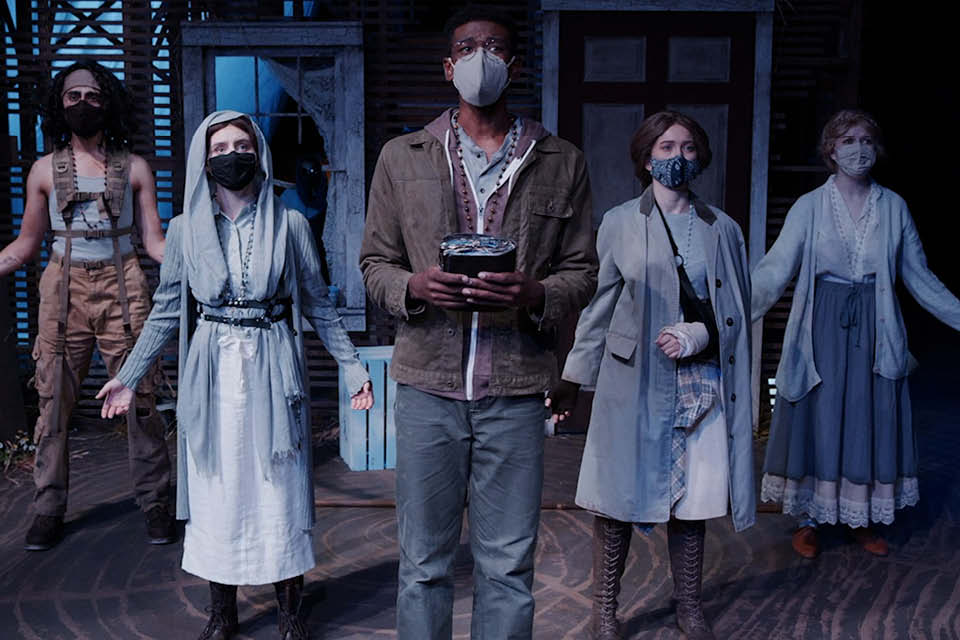 "Down in the face of God" was filmed during the fall semester.

“Sweat” by Lynn Nottage
Friday and Saturday, April 2-3 at 7:30 p.m.; Sunday, April 4 at 4 p.m.
Livestream (prerecorded content)
Filled with warm humor and tremendous heart, Lynn Nottage’s Pulitzer Prize-winning “Sweat” expertly weaves a tale that endures with themes of economic disadvantage, despair and reconciliation. Set in the Rust Belt town of Reading, Pennsylvania, in 2000 and 2008, “Sweat” follows a group of friends who have spent their lives sharing drinks, secrets and laughs while working together on the factory floor. But when layoffs and picket lines begin to chip away at their trust, the friends find themselves pitted against each other, and racial tensions are heightened in a heart-wrenching fight to stay afloat. “Keenly observed and often surprisingly funny — but ultimately heartbreaking — the work traces the roots of a tragedy with both forensic psychological detail and embracing compassion,” said The New York Times.

Known for writing about the lives of marginalized people, Nottage is a professor of playwriting at Columbia University. She is the only woman to have won the Pulitzer Prize for Drama twice.

Quin Gordon, director of recruitment for the School of Drama, directed actors from Studios III and IV in the production filmed live in Hanesbrands Theatre during the fall semester.

Set in New York City, a beloved Harlem nun has died, and her former students gather for her funeral. But her body has gone missing, and the delay gives the assembled menagerie time to contemplate the lives and loves they’ve lost (and found). Pulitzer Prize-winning playwright Guirgis delivers a dark comedy that reminds us that our mortality can be (maybe should be) hilarious — if we can just remember what’s important.

Carl Forsman, professor in the School of Drama, directs actors from Studios III and IV in the play, called “uproariously fun and viscerally piercing" by The Daily Beast. “Our Lady of 121st Street” will be filmed during the spring semester.

“Neaptide” by Sarah Daniels
Friday and Saturday, June 4-5 at 7:30 p.m.; Sunday, June 6 at 4 p.m.
Livestream (prerecorded content)
A comedic play about the negative stereotypes and treatment of lesbians in the mid-1980s, “Neaptide” — considered a seminal LGBT+ theater project — follows a lesbian who keeps her personal life private amidst her struggle for custody of her daughter after a divorce. British dramatist Sarah Daniels has relentlessly probed the fault lines of contemporary society, tackling issues like power relations between the sexes, the position of women, lesbianism, pornography, male violence and sexual abuse.

Drama senior Ticket Knowlton directs actors from Studios III and IV. Born and raised in Irmo, South Carolina, Knowlton is the first gender-nonconforming director at UNCSA and previously assistant directed “Our Town,” “Cider House Rules, Parts I and II,” “Next to Normal” and “Scenes from an Execution.” “Neaptide” will be filmed during the spring semester.

Best of the School of Filmmaking
Friday through Sunday, March 19-21
On demand
Interim Dean of Filmmaking Dale Pollock curates a collection of some of the best short films created by student filmmakers from throughout the history of the school.

Screening of Third- and Fourth-Year Films
Friday through Sunday, May 21-23
On demand
The School of Filmmaking presents the premiere of a wide variety of exceptional work by third- and fourth-year Filmmaking students, including narrative, documentary and animated projects, screened for a limited time before their launch into the festival circuit.

Below are highlights of student concerts for spring 2021. See accompanying announcement for information on a series of guest artist performances, and the online performance calendar for a complete listing of faculty, student and guest artist concerts.

Czech Connection: UNCSA Ensembles in Concert
Thursday, March 11 at 7:30 p.m.
Livestream (from the Stevens Center)
Featuring a program of works by Josef Suk, Anton Dvořák and Joseph Haydn performed by UNCSA student ensembles including the Brandenburg Ensemble, the Wind Dectet and the Chamber Orchestra.

As a young composition student at the Prague Conservatory, Josef Suk was encouraged by his mentor, Anton Dvořák, to compose a piece that was "lighter in mood." He responded with his Serenade for String Orchestra to be performed on this program by the Brandenburg Ensemble conducted by UNCSA Associate Conductor Karen Ní Bhroin. Dvořák's gorgeous melodic writing and distinct national character are present in the chamber winds arrangement of his "Czech Suite'' performed by the UNCSA Wind Dectet conducted by Mark A. Norman. Additionally, the UNCSA Chamber Orchestra performs Haydn's Symphony No. 22, "The Philosopher," conducted by Ní Bhroin. 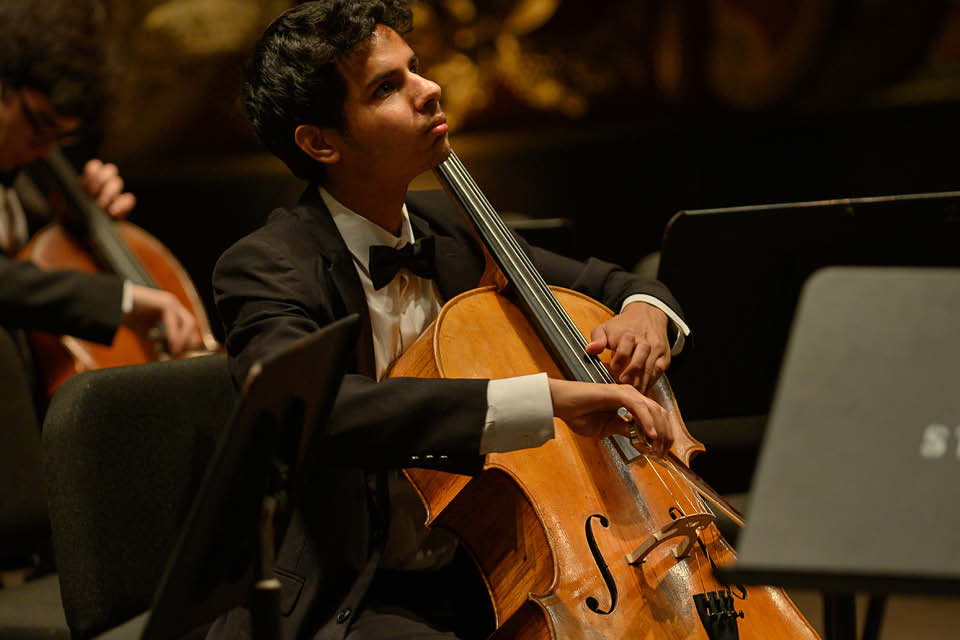 “Ancient Airs and Dances”: UNCSA Ensembles in Concert
Friday, March 12 at 7:30 p.m.
Livestream (from the Stevens Center)
Renaissance and Baroque music from France, Italy and Germany is remastered for varied ensembles in this energetic concert program. Italian influences are heard in Respighi's “Ancient Airs and Dances” performed by the Amadeus Players conducted by Karen Ní Bhroin. Robert Spittal's contemporary reflection on 16th-century French songs provides a lively, heartfelt and capricious suite as performed by the Chamber Winds conducted by Mark A. Norman. The concert concludes with the premiere of the Bergstone Brass, a brass ensemble named in memory of the School of Music’s founding faculty-artist in horn, Fredrick Bergstone. They will perform Brian Balmages' provokingly powerful brass and percussion choir work "Ite missa est" featuring Martin Luther's "Ein feste Burg ist unser Gott" (“A Mighty Fortress is our God”).

nu Ensemble: Emotive Responses
Saturday, March 27 at 7:30 p.m.
Livestream (from the Stevens Center)
Founded in 2007 to provide students with opportunities to perform art music that reflects current trends and cultural thinking, the nu Ensemble performs works that represent the cutting edge of the current music scene including the chamber premiere of Joel Puckett's "It Perched for Vespers Nine" and the East Coast premiere of Quinn Mason's "Changes/Transitions" in response to the Black Lives Matter movement. Music by Carlos Simon and Anna Clyne involving spoken word, electronics and film are also featured, as is the premiere of a new work by student composer Drew Harris. Conducted by Saxton Rose and Mark A. Norman.

The final round will be streamed live from Watson Hall, and the winner earns the opportunity to perform as a featured soloist with the UNCSA Symphony Orchestra or Wind Ensemble.

Spring Opera: French Opera Double Bill
Friday, May 7 at 7:30 p.m. and Sunday, May 9 at 2 p.m.
Livestream (from the Stevens Center)
The A.J. Fletcher Opera Institute presents two one-act French operas from the 20th century. First, Gabriel Pierné’s “Sophie Arnoud.” Sophie was a famous singer during the time of the last half of the 18th century. In her retirement, her former lover Duvall makes a visit and a long-held secret is revealed. “L’heure espagnole” (“The Spanish Hour”) is a comic opera by Maurice Ravel. A jealous husband, a wife with a roving eye, and a muleteer meet at a clock shop one morning. James Allbritten is music director, with stage direction by Steven LaCosse and music preparation by Angela Vanstory Ward.

In addition, Fletcher Opera will present a salon opera double bill by Manuel García, Sr., livestreamed from the Stevens Center at 7:30 p.m. Friday, Feb. 26 and at 2 p.m. Sunday, Feb. 28. 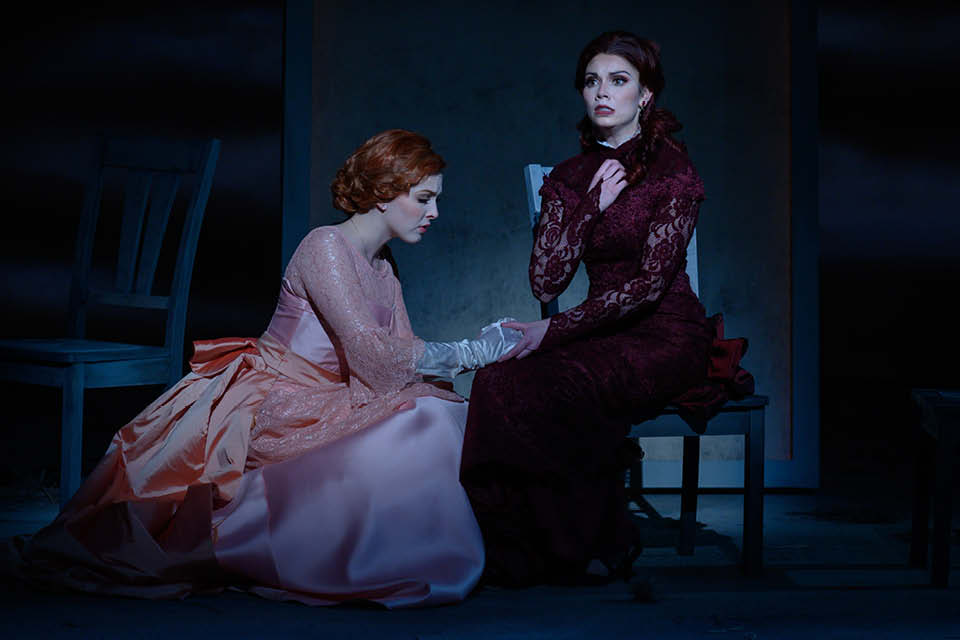 In addition, a previously announced concert by the Reynolda Quartet highlights a season of free livestreamed performances by acclaimed faculty-artists in the School of Music, including a Valentine’s concert featuring woodwind faculty pairs on Saturday, Feb. 13; a duo piano recital by Allison Gagnon and Dmitri Shteinberg on Tuesday, Feb. 16; a program of Prokofiev's work for piano and strings performed by Allison Gagnon with Janet Orenstein, Brooks Whitehouse and Ulrich Eichenauer on Saturday, Feb. 27; a program of world premieres by female composers with the flute and soprano duo Anima Vox (Tadeu Coehlo and Carole Ott Coehlo) on Tuesday, March 9; a recital by violinist Kevin Lawrence and pianist Dmitri Shteinberg on Saturday, March 13; and solo repertoire for horn and trumpet featuring works by female composers performed by Maria Serkin and David Dash on Tuesday, March 30. Details are available in the online performance calendar.